Dean bows out, but says Dean for America lives on to fight another day -- but how? 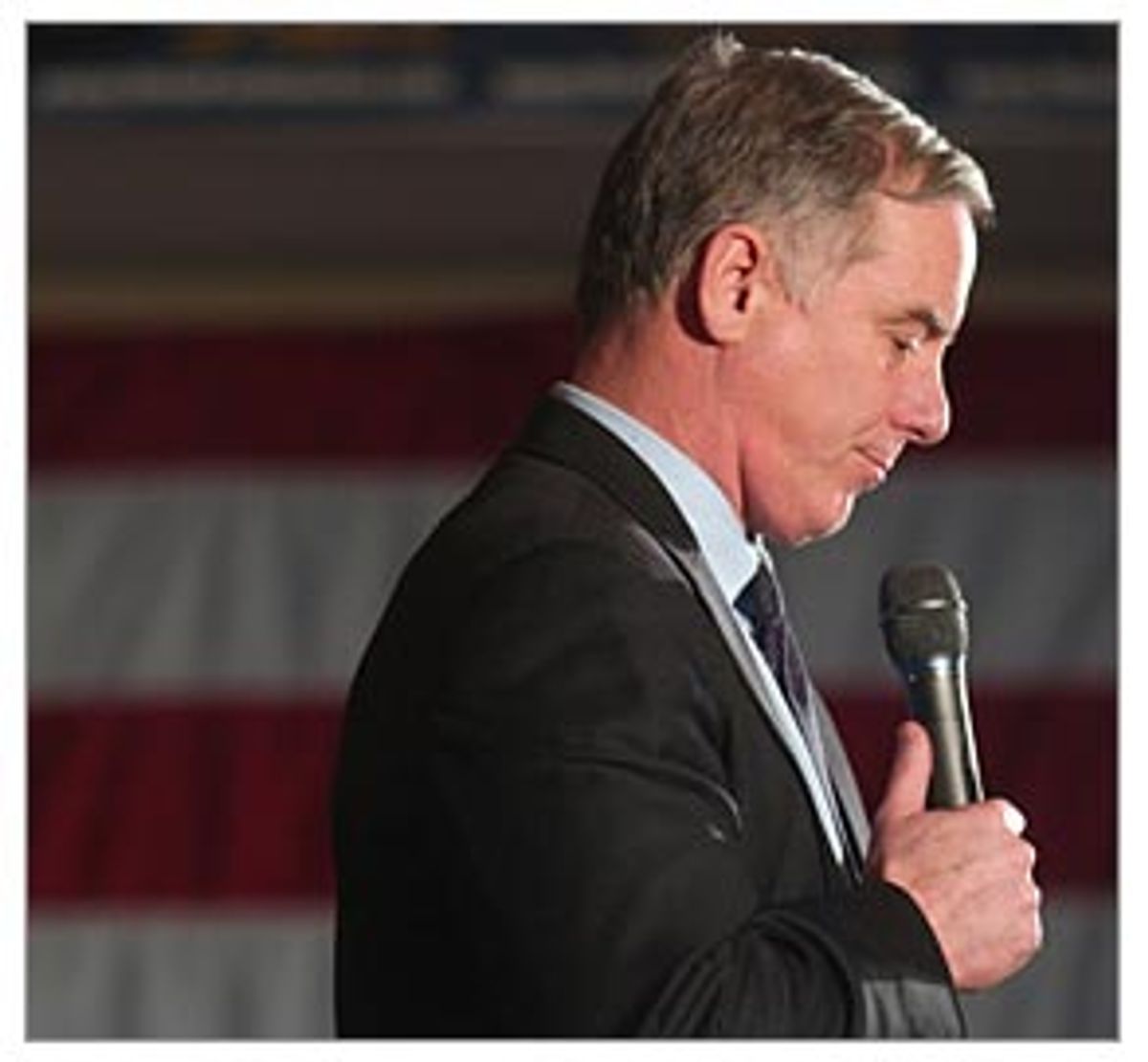 Howard Dean's televised speech announcing the end of his formal run for the presidency turned out to be a perfect microcosm of his entire campaign: In the beginning, you couldn't see the candidate, because his adoring supporters were waving placards that obscured his face. And in the end, as he began to talk directly to his young backers about what lessons they should take from his campaign, the cable news shows cut away from his speech, so their in-house pundits could blab about the Dean phenomenon without being distracted by Dean himself. Howard, we hardly knew ye.

It's going to take a while to sort out everything Dean's stunning rise and fall tells us about American politics, but a couple of things are clear already. Dean is too smart to flirt with a third-party candidacy, and he threw cold water on the nihilists and Republicans who've been encouraging such talk. The best thing to come out of his Wednesday speech was his pledge not to mount a third-party run, and his plea to supporters to ignore anybody who does.

On the other hand, I'm a little bewildered by what Dean announced he's going to do -- end his official candidacy, but urge his supporters to vote for him anyway in the upcoming primaries, to form a "progressive caucus" of delegates at the Democratic convention in July -- but that doesn't mean it's a bad thing. Nobody's ever fully understood the Dean phenomenon, including Dean, so it's not immediately obvious how to best harness the energy he tapped to remake the Democratic Party. I'm willing to watch Dean try -- for a while.

Smart people are already saying he should simply end his campaign and endorse one of his rivals, but there's no proof that the nascent Dean movement, whatever it is, is something that the governor himself can merely channel in another direction. John Kerry would be a particularly tough sell to a lot of the Deaniacs right now, and while John Edwards might be more appealing to the Anybody But Kerry bloc, it's not clear what endorsing Edwards gets Dean, or his supporters. That's at least partly because it's not clear what Dean or his supporters want to achieve.

The problem with trying to predict what will or should become of the Dean phenomenon is that no one knows what it was, let alone what it is right now, or could be come November. Except on the issue of going to war with Iraq (and admittedly, that's a mighty large exception), Dean never laid out an agenda that was markedly different from his fellow Democrats', and so he was hurt when Iraq began to fade as a defining issue in the campaign. Sure, he took a few other singular stands -- repealing Bush's tax cuts, not tinkering with them; concentrating on getting all Americans health insurance before trying to overhaul the whole system -- but those aren't the sorts of differences you build a movement around.

To some the message was Dean himself: That a straight-talking guy, kind of an angry guy -- but who wouldn't be angry in George Bush's America? -- could unite a disparate group of bloggers and grandmothers and peace activists and the formerly unengaged to take back our country, whatever that means. I was encouraged by the prospect of this noisy, ragtag, mostly but not exclusively lefty Internet army propelling the centrist Yankee doctor forward. In fact, I was more than encouraged by it, I was its captive, at least for a while. As an early target of the Dean Defense Forces -- a brigade of e-mailers dedicated to writing to reporters they thought were unfair to their man (I'd defended Dean from Democratic Leadership Council attacks on him, but still insisted I thought John Kerry was more electable) -- I succumbed to organized pleading to give Dean another chance. I did, I liked what I saw, and I wrote about it in a cover story headlined, "My Big Fat Mea Culpa: I Haven't Decided to Vote for Howard Dean, but After 10 Days Watching His Campaign, I Promise Never to Say He's Unelectable Again."

Watching Dean bow out on Wednesday, I found myself wondering, do I have to write another mea culpa now? Or can I just take back the first one -- "Hey, I was right in the first place: He wasn't electable!" It's not just an inflated sense of my own importance that inspired my questions, but a real curiosity about the nature of Dean's appeal, and its ultimate limits.

The fact is, Dean was electable -- he just didn't get elected. And while his aggressive supporters played a huge role in getting him taken seriously, they probably also played a role in his defeat. The flip side of the zeal and energy that motivated people to blog and e-mail and send money and try to convert the world to their cause -- which led to the literally hundreds of e-mails I got when I mildly questioned Dean's electability -- was a self-righteousness that turned off a lot of people who weren't already committed. It also served, I think, to insulate the campaign from the real impact of Dean's campaign-trail mistakes. By then, his supporters were so convinced the media was out to get him, they didn't reckon with the real-world impact of his stumbles.

Of course, there are lots of other reasons for Dean's fall: Kerry and Edwards learned from the appeal of his anti-Bush message, and each grew a stronger backbone. He was hurt by the eccentricity of the American primary schedule, which starts in Iowa, where voters like "nice," which Dean simply wasn't, and having lost there, he was doomed. There is no doubt he was harmed by the media, which declared him the primary winner before a single vote was cast, and then aimed at the bull's-eye they put on his back. The Internet itself, once credited with creating the "inevitable" nominee, now, conversely, will get too much blame for his demise. Some argue that Dean and his campaign were lulled into complacency by the self-righteous echo chamber his blogging supporters created. On the other hand, Joe Trippi told the Digital Democracy conference the Dean effort was done in by the very public way the campaign communicated -- he couldn't figure out how to let supporters know he was in trouble, until it was too late, without alerting his enemies to their vulnerability.

So was the campaign too open, as Trippi says, or too closed, as critics say, thanks to its Internet foundation? Probably neither. The Internet is a medium, not a message; the campaign did brilliant things and it also made huge mistakes. But putting Deanforamerica.com in a category with Pets.com is simplistic.

For now, at least, Deanforamerica.com lives on. Dean promises it will morph from a campaign organization into a movement. He'll have a little while to show us what that will mean, and whether it will matter. I'm still not sure what his movement will ask for, and I'm puzzled about why he's urging his supporters to vote for him, even though he won't campaign himself. If he really wants to amass delegates for a progressive caucus, he would have continued some kind of stripped-down campaign. Now most of us will be deciding between John Edwards and John Kerry, and I'm not sure where that leaves Dean.

But I'm not sure the movement was ever really about Dean, anyway. Personally, I'll sort of miss the strange doctor with the wagging eyebrows and the odd smirk, the wrestler's energy, the rolled-up sleeves, the penchant for plain talk and sometimes changing his mind that I found refreshing -- and others found scary. In the end, though, the campaign's failure probably tells us more about the limits of the left than of the Internet, or of Dean himself. (I know, I know, Dean isn't a lefty, and neither are all of his supporters, but his most vocal and active backers disproportionately came from the left. You know who you are.) And while I was impressed watching him win over crowds of environmentalists and union members last summer, I failed to notice that he was only winning over the already angry, the core of the Democratic base. He was right to speak to their anger -- over the stolen 2000 election, the falsely defended Iraq war, the budget-busting tax cuts for the wealthy -- but he never really got beyond it.

Meanwhile, his hardcore supporters got caught up in the fun of blogging and e-mailing one another, and the feeling of virtual community that created, but were unable to expand that network widely enough to win an actual election. Then thousands trooped off to Iowa for a big Dean sleepover, and were surprised when Iowans didn't join the party.