Gene Hackman wipes the floor with Ray Romano in this hackneyed film about a vinegary ex-POTUS and an aw-shucks everyman after the same girl. 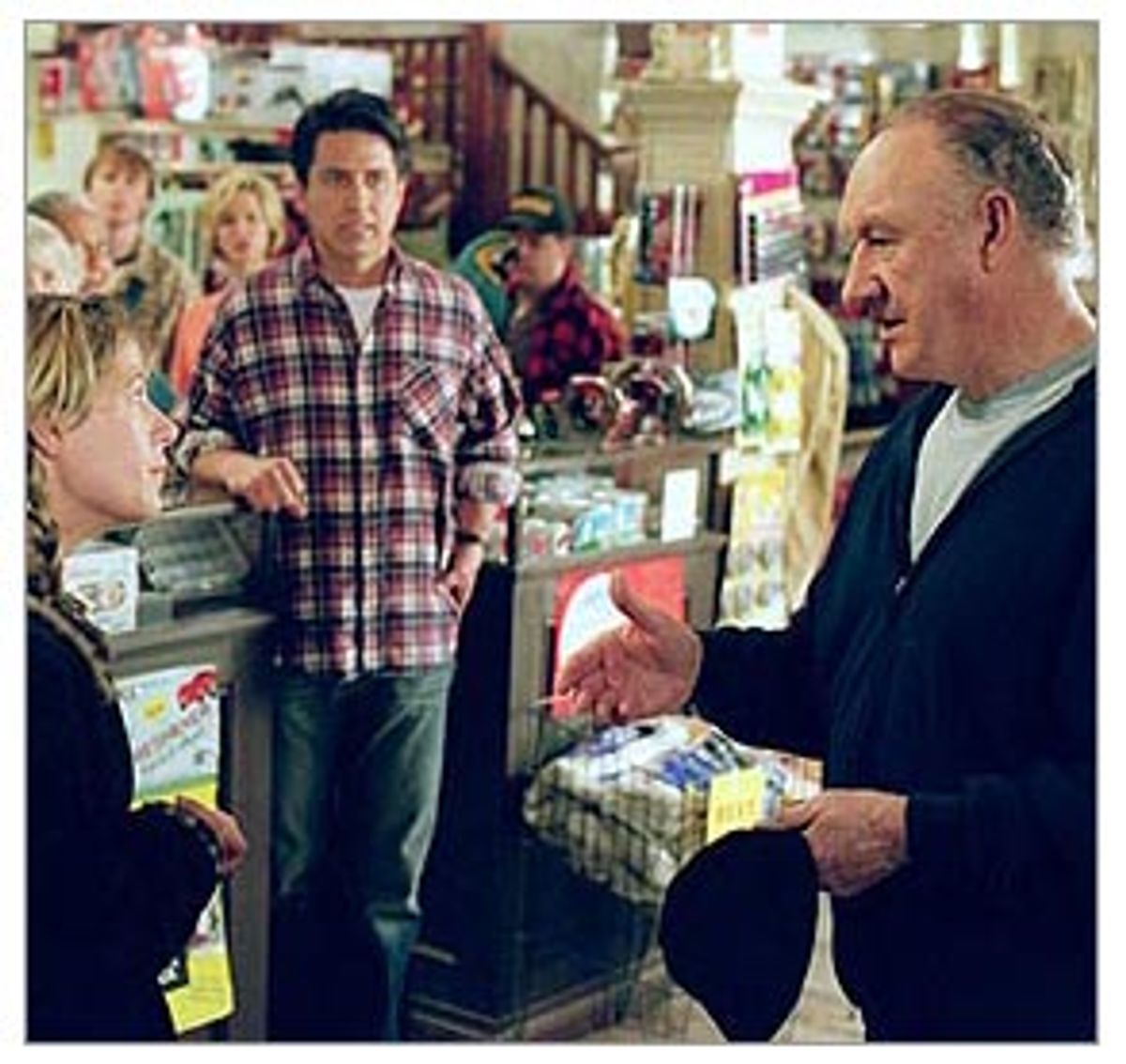 "Welcome to Mooseport" would be better if it were worse: As it is, this comedy about a former U.S. president named Monroe Cole (Gene Hackman) who's cajoled into running for mayor in a small Maine town is blandly mellow and buffed and inoffensive. If it were terrible, you could at least sink your teeth into it; but "Welcome to Mooseport" is like a biscuit soaked in water, ready to be gummed instead of chewed.

Attended by a coterie of servants and Secret Service types, Cole shows up in the quaint burg of Mooseport because it's the only place he's got left: His ex-wife (played by Christine Baranski, who shows up cawing like a crow to give the movie some much-needed comic bite) has grabbed every bit of property he ever owned except his idyllic, and sprawling, summer estate. His arrival puts the town into a tizzy. Most unruffled is Handy Harrison (Ray Romano), an aw-shucks everyman who runs the local hardware store and who has been dating the local vet, Sally (the dazzlingly down-to-earth Maura Tierney, who's likely to jolt you awake whenever she's on-screen), for seven years without bothering to marry her.

Of course, once Cole gets a look at Sally, he wants her too, and you can hardly blame him. He and Handy end up becoming rivals in both love and politics, running against each other for the mayor's job and playing a game of golf -- yes, you read that right -- with Sally as the prize.

The major problem with "Welcome to Mooseport," which was written by Tom Schulman ("Dead Poets Society") and directed by Donald Petrie ("Mystic Pizza," "How to Lose a Guy in 10 Days"), is that with a sexy grizzly bear like Hackman around, who'd even want to look at Romano? The small screen is probably just the right size for his modest, shambling gifts: The big screen clatters and wobbles around him -- he just can't hold it steady. When Handy comes round to Sally's house, all hangdog because she's put on a nice dress and black underwear for her date with the president, it's hard to feel sympathy for him. His lines tumble out in a dada ramble; he seems only half-awake, even when he's frustrated or angry or elated. His very averageness is supposed to be the big draw. But even a regular guy can be responsive once in a while.

Hackman, on the other hand, strolls off with "Welcome to Mooseport" without even trying. His performance is vinegary and tart and vaguely, deliciously dishonorable. Sally isn't the girl for him, and we know it from the start, particularly since he has a close aide, played by the ever-reliable Marcia Gay Harden, who's able to cut through his cantankerous banter like no one else. It's fun to watch the two of them together, just as it's fun when Rip Torn shows up with his Beelzebub eyebrows, playing a wily campaign manager.

Otherwise, though, "Welcome to Mooseport" is pretty skimpy on fun. The trademark colorful townspeople include a really deaf old guy who says everything really loud (it's an old gag, but it works), and another really old guy who scoots around naked (and we dearly wish he wouldn't). The town elders also include a big African-American lady who says "MM-hmm!" a lot, and a big white lady who has a large carry-bag of expressions like, "Well, I'll be buggered by a bear!"

Shot by Victor Hammer, the picture has a diffuse, indistinct, vacationland look. It's furnished with lots of eagerly innocent storefronts decked out with hand-painted signs, which probably look a lot like Maine only if you've never been there. (In reality, of course, the movie was shot outside the much-cheaper Toronto, and why not? It isn't as if Maine could use the money or anything.) At one point the camera catches the Maine slogan on a banner: "Maine: The Way Life Should Be." It should read "Mooseport: Not By a Longshot."