After 25 years together -- including children, mortgages, intimacy and boredom --- Kay and I stood for six hours in the San Francisco rain to become mundane and unspecial. To be married. 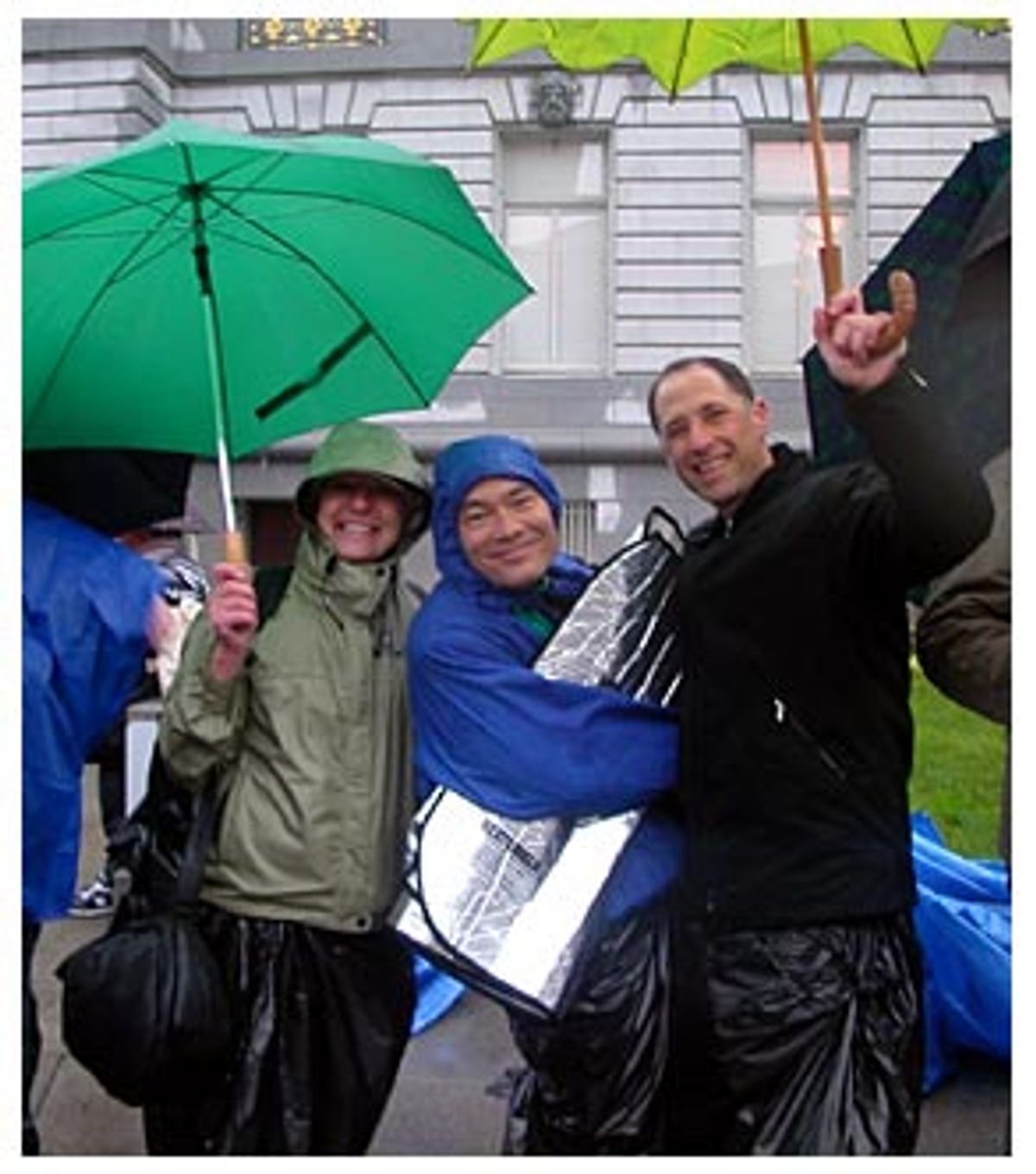 The morning after the wedding, I lay in bed for those pre-alarm minutes and beamed at the ceiling. I am, at least for now, truly and legally married to my dear Kay. After 25 years, after sharing everything that married people share -- children, failures, disappointments, illnesses, successes, adventures, mortgages, intimacy, boredom, in-laws -- after sharing a lifetime, we are mundane and unspecial. We are married.

Kay and I got to San Francisco City Hall on Feb. 16 at 5 a.m. It was drizzling, cold and dark. A dim line of shivering, paired lumps led from the entrance on Polk Street, around the corner, along a whole block of Grove Street and onto Van Ness Avenue. I let Kay off at Van Ness and went to park the car. By the time I got back to her, I knew that our umbrellas, rain jackets and three-legged camp chairs were going to be inadequate. We had packed our wedding finery (Kay's tux jacket, my heels and my new, blue Ralph Lauren angora sweater) in backpacks that became damp in minutes as the drizzle turned to earnest rain. We had dressed warmly but I still had to walk back to the car and pull a down vest and some plastic bags from the trunk. We covered what we could. It was going to be a long wait.

In a red, plastic envelope I carried all the domestic partnership documents Kay and I have collected over the decades -- from Marin County, from the state of California, from the college, each document signed and sealed and notarized in the most proper way, each document treasured, but none a real marriage certificate. I tucked the papers deep into the pack, twice wrapped in plastic, precious records from a long-fought civil war.

The sun came up at 7. The sky went from gray-black to gray-white and the streetlights went off. A wind snaked its way around the corner and whipped at the umbrellas and blue camping tarps. Every now and then Kay or I would try to bring our toes alive by walking around the block. I tried to count the people ahead of us. Rumor was that 500 would make the cut. Were there 250 couples ahead of us? It was so hard to tell how many people there were under the plastic sheets and makeshift tents. Even when I asked, I found it impossible to tell how many were waiting to be married and how many were guests. I had no way of knowing how many people ahead of us were, like us, saving a place for others.

Our dear friends Greg and Ben had tried the City Hall line on Saturday and on Sunday, two days in a row. They had gathered family as witnesses. They had gone without sleep. And both days, they had been turned away. By Sunday night, they were exhausted and disappointed, but we convinced them to try once more. We sent them home to sleep promising to call and wake them in time.

The line behind grew by twos every few minutes. By dawn, the queue had lengthened around the corner of McAllister Street and was starting back toward Polk. A McDonald's opened two blocks up Van Ness. I got coffee, hash potato sticks and a chance to dry my knees under the hand dryer in the bathroom. Kay left her coffee with me to use the McDonald's bathroom too. And in the light we could finally see the people with whom we had been trading life stories. Asa, who on Friday had married his partner of 28 years, had returned to witness the marriage of his nephew, who had driven down from the Sierras. Sherry and Sharon, together for 11 years, had made the trip from Oregon. At dawn, the stories gained faces.

And the dawn brought something else: the support of people all around us. Suddenly we had more than the fellowship of those soggy people in line, but from commuters and passersby too. Cars and buses honked and the people inside them waved at us happily. A teenage girl on a bicycle rode by saying, "This is so great! This is so great!" People started coming by with Styrofoam cups and big cartons of Peet's coffee. Not just gay people, but straight people with children came by with bagels and doughnuts and biscotti. A beautiful little boy walked along the sidewalk with his mother giving out yellow roses. An SUV was parked at one corner dispensing juice and hot drinks. Breakfast and smiles and cheers. These people, who left their warm beds to support us, were genuinely happy. "Congratulations! A wedding breakfast! Good for you!" They beamed like proud family. It was still raining, but it wasn't cold.

I am a proud and reserved person. I constantly protect myself from the danger of condescending sentimentality. I carefully filter out the world's opinions and judgments. But these kindnesses broke my heart. I was frequently in tears.

At 8 o'clock, I was on one of my walks when I heard a City Hall worker announce to the people on McAllister that the first 200 people were going to be allowed in. She said that volunteers were arriving and would work as hard as possible to take in people as quickly as they could. We hadn't expected the doors to open until 10! I dashed back to my place in line, and it was already moving. I tried frantically to use my phone. My fingers were frozen as I punched in Greg's number. I missed a half-dozen times, trying to keep the phone under my hood, carry the umbrella, move the packs, keep in line. I hung up on someone named Jennifer. I got the screech of no such number three times. Finally, I heard Ben's voice. "The line's moving. Get here fast," I yelled. "We're in the car. We're on our way," he said.

I needn't have panicked. We rounded the corner onto Grove Street, but then the line stopped. And there we stayed again. Long after our friends found us. Long after we dressed ourselves in complete gowns of black plastic for warmth, long after we learned the names and lives of dozens of fellow travelers. Our line turtled its way, pair by pair. It took us until 11 o'clock to reach the warmth of City Hall.

Standing for six hours in the rain does something to one's resolve. It either deepens it or dissolves it. By the time we got inside and passed security, we were a cold, soaked, directed knot of determination. We would be married, and we would witness for each other. We lost an umbrella somewhere in line, but we never lost sight of each other.

It wasn't until I had peed, washed, changed and repacked that I was able to reestablish the context and reason for what we were doing. I drank a cup of water and remembered that somewhere in South Dakota there was a 13-year-old kid watching this on TV. No matter how the TV cameras searched for the bizarre and weird, they would have to include the ordinary among us, the mothers with their children, the overweight, the buff, those beautifully dressed in Filipino wedding shirts, and those who were left in their rain gear. That kid in South Dakota would see that ordinary people like the people in his neighborhood are gay, love each other and want to be married. That kid will see that there are options.

Ben said, "You know. Before I started this, I thought, Who needs such a thing as marriage. Now I know. I do. I need it." I want to tell you. The people who got married during this long weekend include lawyers and writers and doctors and teachers, many of them newly politicized. These people are not going to give up their marriages lightly. They are going to hold on. This is going to make a difference.

So the four of us dried ourselves with paper towels and joined a new line. Kay's tux jacket had gotten wet in the pack and smelled musty, like cleaning fluid. My soft blue sweater topped soaking pants. Greg's tan cashmere was moist. But we were slicked and ready and strangely emotional. Four lifetimes of witty repartee dropped to the tiled floor. Four once-ironic people were quiet. We were as wide-eyed and sincere as babies.

The volunteers took over. There must have been hundreds of them. They checked our papers for us. They helped us fill out forms. They walked our group of four from station to station. Each clerk congratulated us with a giant grin. Each asked, "How long have you been together?" "Where are you from?" We could hear the answers from other groups. Fourteen years. Twenty-six years. Nine years. Nevada, San Anselmo, Sacramento, Seattle. I was grateful to each volunteer. "Thank you. This is so good of you," I said. Over and over, the person replied, "I couldn't do anything more important. This is the best day of my life. I'm so happy to be here." These people -- clerks, janitors, ministers, students -- gave their whole weekend, canceled trips and vacation, to be part of our grand event.

Each step was performed in a marvel of efficiency. Hundreds of people, a constant crush, a huge swirling mass of humans, were moved from station to station by these wonderful volunteers, from form to license to the giant rotunda where each couple was met by a minister or deputy and taken to a spot for the ceremony. A flute and harp played. We were pulled from the line by our minister, a man who works at Stanford University with Ben. Our minister is the husband -- he calls himself the "lifetime partner" -- of Mabel Teng, the city's assessor and recorder, responsible for issuing the wedding permits and one of the great heroes of this day and of this event. He had been watching for us. He told Ben, "I was hoping to find you all weekend."

We were married at the top of the big marble steps. First Kay and I exchanged rings. I looked at my dearest one and promised trust and honor and loyalty, gifts long ago given freely, gifts openly given for decades. A gift here, finally, consecrated and witnessed. "I thee wed, partners for life." First Kay and I were married. Then Greg and Ben were married.

We took pictures of each other with my wet camera, pictures that are all smeared by mist and movement. We filed our licenses and walked out of City Hall, through a gauntlet of tap dancers and loud applause. Outside, the steps and sidewalks and streets were filled with people, cheering each couple as they left. Through my tears, I saw a taxi going up McAllister. There was a sign on its side: "Free rides for newlyweds!"

Carol Adair, 62, teaches English and ESL at College of Marin. She lives with her partner, Kay Ryan, in Fairfax, California.