Cautious Democrats worry that San Francisco Mayor Gavin Newsom's historic affirmation of gay marriage will help Bush win reelection. But as the right squabbles over the issue, his party may well thank him in November. 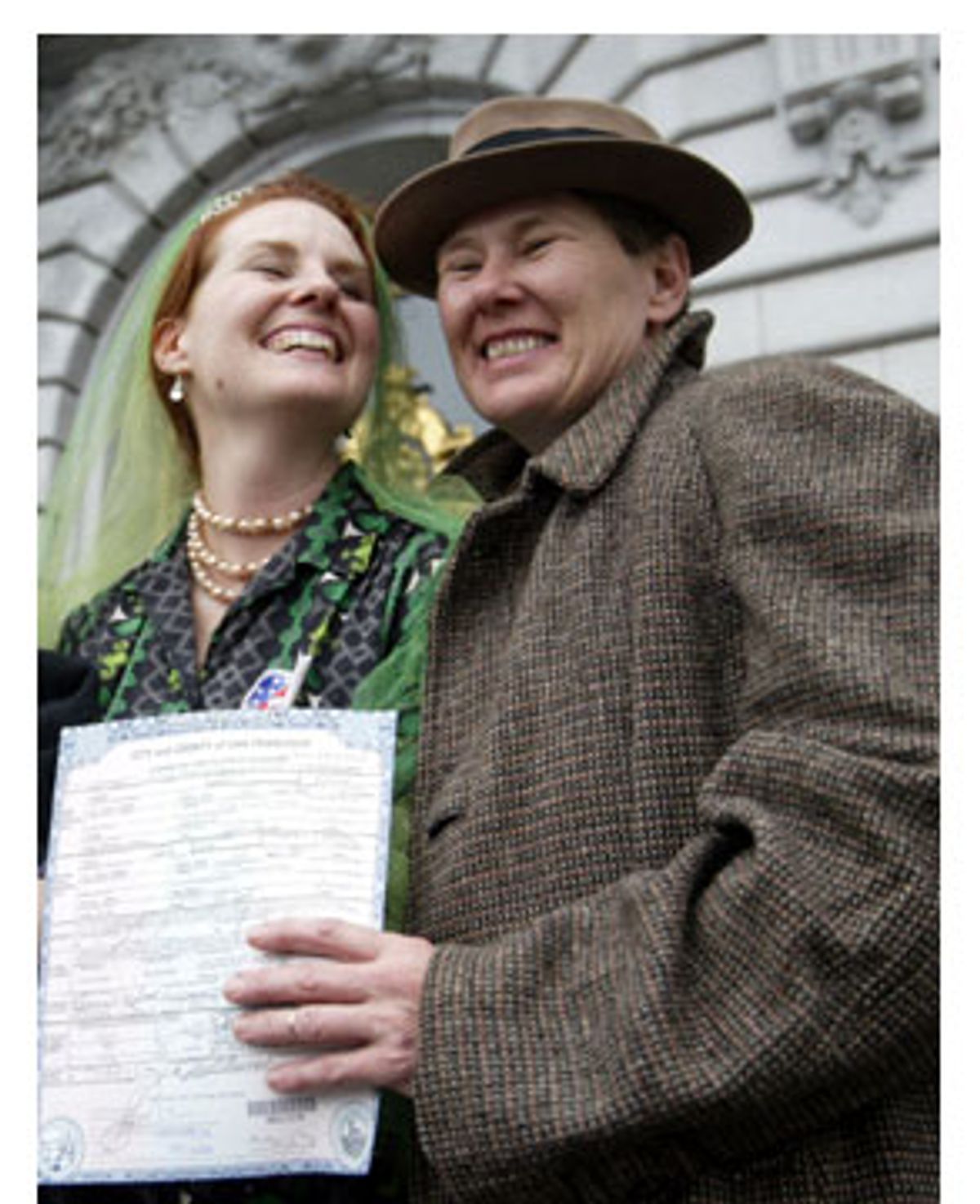 San Francisco Mayor Gavin Newsom "looked like the cat who ate the canary," Supervisor Tom Ammiano recalls, at a hastily convened private meeting Feb. 10. That's when Newsom told Ammiano, who'd run against him for mayor last November, about his plan to issue marriage licenses to gay couples, and asked for Ammiano's support.

"I'm fucking delighted!" the stand-up comic turned politician told the new mayor. Almost two weeks later, Ammiano was still beaming. City Hall had become a giant wedding chapel; just outside Ammiano's door, same-sex couples were being married in the glorious rotunda, on balconies and landings, in a dozen quiet nooks all over the building. And the national gay-rights leader was at a rare loss for words to describe the scene. "It's just so, so ... so queer!" he says finally. "But I think he's unleashed something that's bigger than all of us."

That's for sure, although it's still not clear exactly what it is. Even some gay rights advocates have worried that Newsom unleashed a big fat political backlash, epitomized by President Bush's decision Tuesday to back a constitutional amendment banning gay marriage. "What Mayor Newsom has done in San Francisco ... has in fact energized and motivated those who support marriage between one man and one woman," Mathew Staver, president of the Florida-based Liberty Counsel, told the Los Angeles Times in the wake of Bush's decision on Tuesday.

That's supposedly why Rep. Barney Frank warned Newsom against his bold move. (Ammiano shakes his head at Frank's judgment. "That's Barney -- so Beltway-centric!") But Democrats all over the country have been telling the new mayor that the only person happier than the gay newlyweds is Karl Rove, who will now be able to run a campaign about the Democrats' degradation of marriage, rather than unpleasant issues like the jobless recovery, the massive budget deficit and the Iraq debacle. And the debate is sure to rage on: Will San Francisco's Winter of Love make it easier for Republicans to hold onto the White House next November?

No one knows for sure, but I don't think so. I feel like I have to confess upfront that my analytical skills have been warped by watching all of these weddings. You can't imagine what it's like from a distance. Straight or gay, visitors get teary when they walk inside City Hall, where the meaning of what Newsom did is huge and palpable. It's always struck me as vaguely homophobic, the insistence on how "normal" these couples are, but that really is what hits you in person. Sure, there are drag queens in the line waiting for marriage licenses, and plenty of old-fashioned flannel-shirted lesbians. But there are also 50-something men in bad suits and women in Prada; there are women in wheelchairs and interracial couples; and there are children everywhere, kids doing homework sitting on the floor as they wait for their parents' turn to get married. These are families already, and once you see them you know: There's really no going back.

And the ripple effect across the city, and the world, is enormous. In San Francisco, everyone knows someone who got married -- two of my daughter's public school teachers did it -- and practically every city official was deputized to marry couples over the long Valentine's Day weekend. I ran into bleary-eyed Newsom staffer Joe Caruso on Friday, the day Cambodia's King Sihanouk came out in favor of gay marriage after seeing the San Francisco weddings on TV, and Caruso was carrying one of the hundreds of bouquets of flowers strangers had sent from all over the world. The card was inscribed simply: "To the happy couple, With love from Eileen and Darren of British Columbia." People were dropping by City Hall all last week just for the emotional high. Straight San Francisco, too, is glowing with gay pride.

"We were just trying to put a human face on this issue," an exhausted Newsom said on Wednesday, after appearances on CNN's "Larry King Live" and ABC's "Nightline." He acknowledges that he's heard criticism even from supporters for his so-called act of civil disobedience. "That's the strongest argument: Why should a mayor be judge and jury and substitute his subjective interpretation of the Constitution? I've heard that. What I say is: The courts will decide. The system is working."

It's safe to say that of the roughly 119,000 people who voted for Gavin Newsom in the mayoral runoff last December, nobody thought they were voting for the radical in the race. The radical was the other guy, Matt Gonzalez, the Green Party leader who knocked off Ammiano in November and ran a spirited, occasionally brutal race against Newsom, whom he caricatured as a captive of corporate San Francisco. When I publicly declared my support for Newsom on the eve of the election, it was a dramatically uncool thing to do, and I spent many holiday parties defending my decision, which was more a reaction to the nasty campaign Gonzalez ran than a passionate belief in Newsom. (I think the die-hards who kept up their Gonzalez campaign posters featuring Newsom alongside Bush and Gov. Arnold Schwarzenegger might finally have to take them down.) I saw the new mayor as a cautious, wonky Democrat who might get some good things done. I wish I could say I saw this coming. But anybody who tells you that is a liar.

It's not just his gay marriage moves that shocked the city. In his first weeks on the job, Newsom toppled the powerful but scandal-shadowed police chief and replaced him with a Chinese-American woman, acting chief Heather Fong (he pledged to do a national search), who has already shaken up the command staff and looks like she expects to keep the job. He named the first female fire chief, Joanne Hayes-White, to preside over a department that's still dogged by issues of diversity, and appointed an African-American lesbian, Heather Hiles, to the school board. He told the Chamber of Commerce to expect to share the pain of a looming budget deficit, warning that some kind of business tax-hike is all but inevitable. He took department heads on a tour of ragged, neglected BayView-Hunter's Point, declared the city's epidemic of youth violence a travesty, and put city officials on notice that he wanted change in the way they approach the problems of crime and poverty.

But even though Newsom's bold moves have surprised me, the way he made them and defended them has not. I also voted for him because of a gut sense of his personal decency, an intuition that, agree with him or not, he acts from a moral base, which I respect. When you disagree with him, it can be a little scary. I called him a "sanctimonious schoolboy" last year after we argued about his aggressive panhandling initiative, when he insisted opponents like me were basically saying it was fine to let the city's down-and-out continue to die on the streets. Ouch. Of course, it's sanctimony when you disagree with someone, but conviction when they're on your side. So I've enjoyed watching Newsom's Catholic-schoolboy conviction on the gay marriage issue, his unflappable sense of his own righteousness as he goes up against the Christian right.

It's hard not to notice that Newsom is doing well politically by doing good, and lots of folks are asking if that's the point. "There's a lingering suspicion that this is like the candyman, you know, he's doing this great thing and then he'll do something bad," Ammiano admits. The mayor's cause wasn't helped by an anonymous aide who crowed to the San Francisco Chronicle that if you "control" the gay vote, your political success is assured in San Francisco. There's no doubt his stance has helped Newsom on his left: Pollster David Binder says that just a month ago, only 39 percent of self-described "progressive voters" had a favorable view of Newsom; that soared to 72 percent in a Binder poll this week, though the mayor lost support among the conservatives and older voters who had formed his base.

Kate Kendall, director of the National Center for Lesbian Rights, says it's "insane" to think Newsom took his stance on gay marriage for political gain. "He was told by his own gay staff, 'You're going to ruin your political career,' and he said, 'I don't care,'" says Kendall, who calls Newsom's move "completely transformative." Newsom confirms that some gay staffers worried about the move, but says they were won over quickly. Now he acknowledges the most fear comes from older San Franciscans, those of his father's generation. He says his father, former Judge Bill Newsom, "supports me, but a lot of his friends and our family members can't believe I'm doing this. But that generational shift shows the inevitability of this change."

On the national level, the conventional wisdom says that Newsom hurt the Democrats by catalyzing a gay marriage backlash and handing Karl Rove a wedge issue with which to clobber likely nominee John Kerry in November. But in fact, the opposite might be true. Democrats may yet thank Newsom, and the Massachusetts Supreme Court, for pulling the president out of his political spider hole and forcing him to back a constitutional amendment. Already his base is squabbling over whether Bush went far enough, and even Tom DeLay isn't sure he's ready for a move as radical as amending the Constitution.

Newsom won't take credit or blame for forcing the president's hand. "He was going to do this; the question wasn't 'if' but when," says the mayor. "It's a remarkable risk from [Bush's] perspective. He's got a debate going now in his own party. I think it was a huge mistake, but history will judge that."

Meanwhile, Kerry could come out of this looking like a centrist. When Newsom was on CNN's "Late Edition" Sunday morning talking to Wolf Blitzer, the screen below him kept flashing the words "John Kerry is opposed to gay marriage." By staking out one extreme on the issue, Newsom showed that Bush is at the other extreme. If elections are won in the middle, that's good news for Kerry.

But it's too early to know how Newsom's move will play politically, or even legally. It's still possible the courts will say he's wrong and stop the weddings. In the meantime, San Franciscans can be proud of what's going on in City Hall. I walked away last week unexpectedly happy, knowing without a doubt: This is what history looks like. This is what it feels like to do the right thing.