This murder mystery about a female cop whose one-night stands keep getting murdered would be totally unwatchable if it weren't for Ashley Judd. 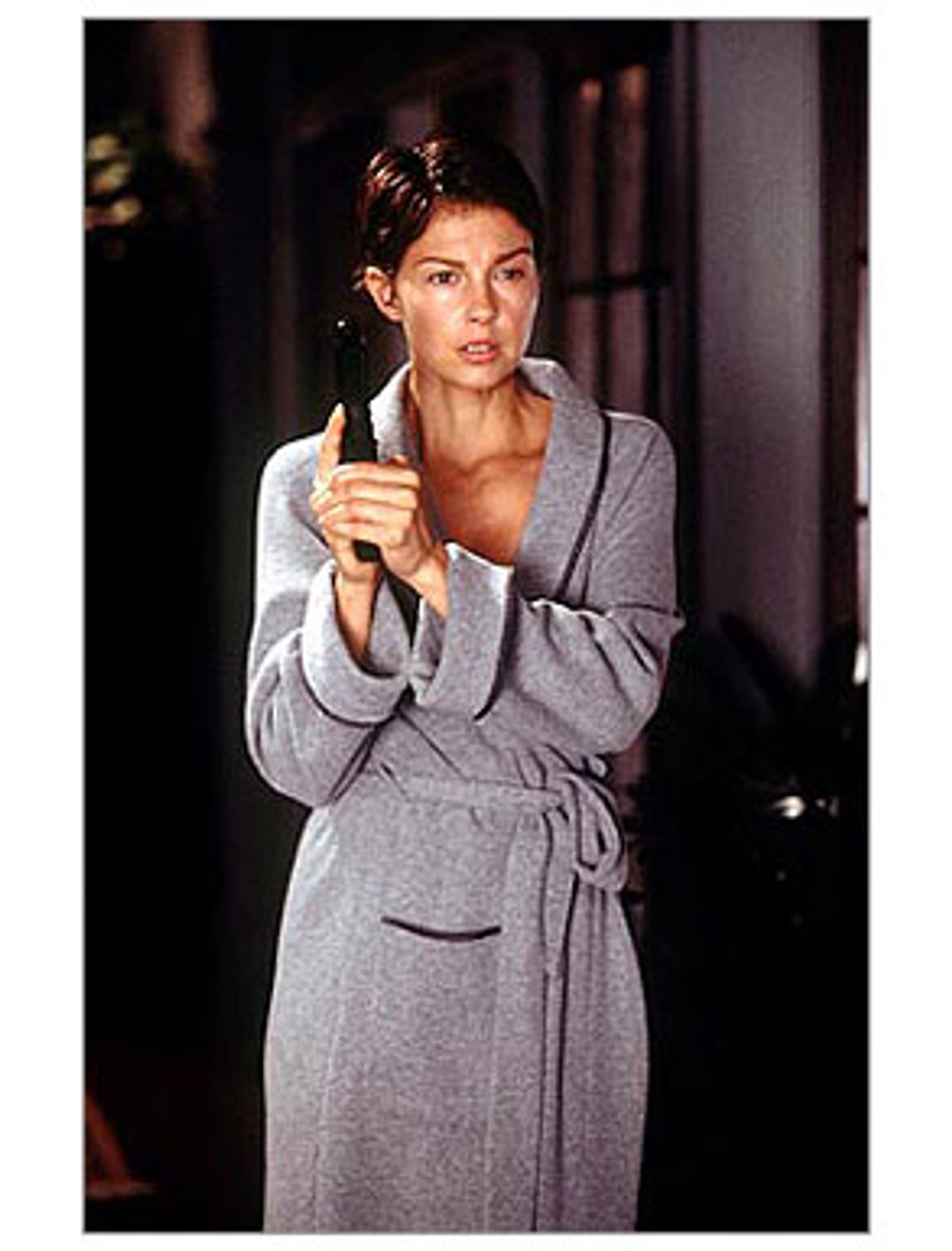 The shots of the Golden Gate Bridge that open "Twisted" -- even the angles it's seen from -- are unlike those in any other movie. The spires of the bridge seem to float up out of a fog bank and if the structure weren't so familiar you couldn't imagine what lies beneath. The opening shots, with weird-angled views of seagulls flying overhead and almost no land visible, impart a quiet ominousness. The same holds true for a later shot of the Transamerica pyramid at night -- it looks as if it's teetering in the fog.

The tone stays with you through the opening scenes in which Ashley Judd as Jessica Shepard, a San Francisco cop, gets the upper hand on a serial killer (Leland Orser, doing his usual twitch routine) who's holding a knife to her throat. Jessica is promoted to homicide detective for her arrest, but she's also sent into counseling, which we're told is routine for any officer who's been through a traumatic event.

In the scenes with the police shrink (David Strathairn) we find out that when Jessica was a little girl, her father, who was also a cop, went on a rampage that ended with his killing her mother and then himself. That's screenwriter Sarah Thorp's way of alerting us to danger signs in Jessica, whom we've already seen beat up the serial killer after he's been disarmed and cuffed. She's a drinker, too, routinely polishing off a bottle of cabernet alone in her apartment at the end of the day. And after the party that follows her promotion, we see what we find out is another routine when she heads to a bar to pick up a guy for some anonymous sex.

It doesn't take long for her to catch her first homicide case, which she and her new partner (Andy Garcia) soon realize is the work of a serial killer. The catch is that the victims are all men Jessica has had one-night stands with, and on the night of the murders her drinking has resulted in blackouts. It's worse for Jessica not just because the other detectives in the squad aren't ready to accept a woman as their colleague but because her mentor is the police commissioner (Samuel L. Jackson), her father's former partner and the man who raised her after her parents' death.

That's not a bad start for a murder mystery, but Thorp's script goes by the generic numbers, never delving into the stew of family history, barely controlled anger, boozing and sex that the story is ripe to exploit. As the bodies start predictably turning up, Judd's tearful confusion over what is going on begins to seem unintentionally funny. We're not put inside her head and so we're left on the outside observing what becomes an increasingly silly spectacle.

"Twisted" would be dismissible as just another bad Hollywood thriller if the director, Philip Kaufman, weren't one of the most talented American filmmakers. It's no disgrace that the material doesn't give Kaufman the richness of his best films -- "The Unbearable Lightness of Being," "The Right Stuff," and his stunning remake of "Invasion of the Body Snatchers." But there is less of him in "Twisted" than in any other movie he's made. This is a director who even managed to make a good movie out of a Michael Crichton novel (that's not a slam against popular fiction -- just Crichton). Kaufman's "Rising Sun" not only subverted the xenophobia of the novel, the picture was a witty take on how it's impossible to trust images in the digital age.

It takes some assurance to make a murder mystery, as Kaufman did in "Rising Sun," that winds up telling the audience that nothing we've seen (even the solution) can be trusted to be the truth. But that's a very different sleight of hand than the attempts that even a talented director has to resort to in a script of this caliber. "Twisted" is filled with obvious red herrings, but the identity of the killer is even more obvious, and what's worse, telegraphed in one scene.

Kaufman, who's always had something of the naughty-boy sensualist to him (think of the scene in "Rising Sun" with the Asian gangster eating sushi off the torso of a naked cutie), might have been attracted to this script because of its flirtation with the male pathology toward sexually aggressive, independent women. An American movie where the heroine isn't judged for wanting to have uncommitted sex -- where that doesn't turn out to be a symptom of the emptiness of her life -- represents at least a bit of maturity. But there's not much Kaufman can do when that's a mere plot device.

Kaufman's work here is efficient and trim, but the mood set up by those first few shots soon turns murky and sluggish. Peter Deming's cinematography makes it appear as if everything is being shot through smudged, green glass. The movie's look is both foggy and bilious.

What keeps "Twisted" watchable for at least a bit is Ashley Judd. Judd is both in the tradition of the suffering drama queens of '40s women's melodrama and also one of the prickliest presences in the movies. Everything about her suggests a thin-skinned irritation. That slim slash of a mouth and the way she can smirk with her eyes makes you watch her in constant expectation that the next thing she'll say will be a sliver of ice-cold exasperation. There's a flat, sarcastic insinuation to her line readings that makes you long for every boob she runs across to get on her wrong side so we'll have the pleasure of watching her tell him off.

You could imagine Judd in romantic comedy, though it would have to be highly stylized and provide her with a partner who could give back as good as she dishes out. Judd is let down by "Twisted" because tearful, confused victim doesn't come naturally to her; she's not fun to watch suffer if you can't see her calculating the payback. Her kind of spunk is the sort that even Lou Grant might have been able to stand -- spunk laced with vinegar.