The unstoppable "CSI" franchise plots another spinoff for the fall. Just one question: Is this an investigative drama or a screwball comedy? 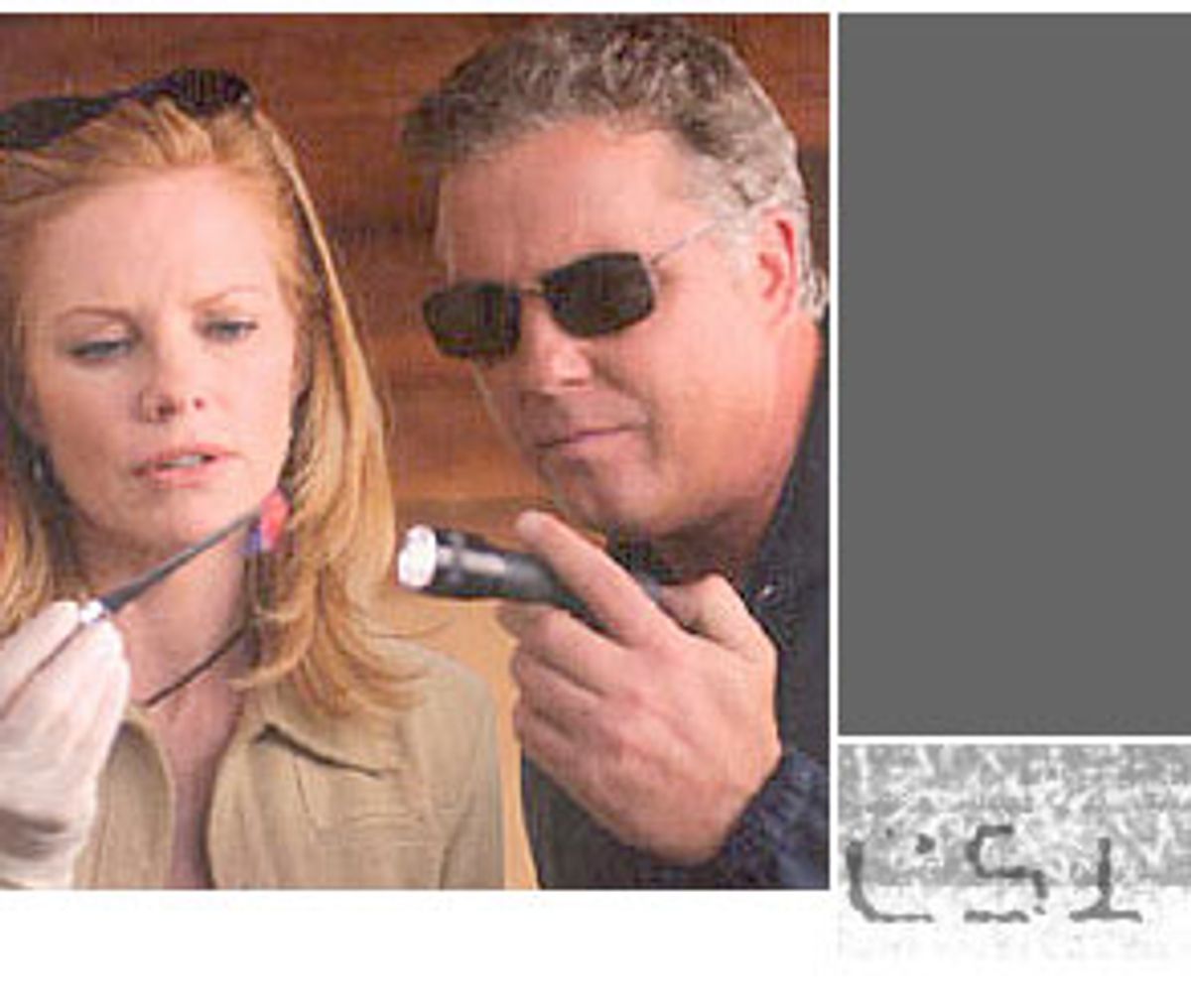 Words to the wise: Never leave spent bullets lying around, because if a hurricane were to blow through, the winds could hurl a bullet through your neck and kill you. Always keep your dog away from firearms unless you want him to shoot your head off. Never siphon gas from your jet ski and then make a call on your cellphone, or the spark from the phone might cause you to explode from the inside out. And if you ever decide to wear a big gray raccoon suit, make sure not to drive out to the country, or a local farmer might mistake you for a coyote and shoot you.

Such cautionary measures might seem excessive to some, but viewers of the very educational and informative "CSI: Crime Scene Investigation" and its cousin "CSI: Miami" recognize that death lurks around every corner, and if your crazy boss doesn't kill you, and your boyfriend's envious ex-wife only manages to maim you, then a hungry shark is almost certain to finish you off.

Horatio: The child may have been unplanned, Alexx, but the murder wasn't!

It was only a matter of time before the slickness of the Hollywood blockbuster trickled down to the small screen. If you can't beat the gritty realism of "NYPD Blue" and "Law and Order," why not replace reality with pure fantasy? Swap out the hand-held cameras for sweeping aerial shots, CGI effects and sepia-toned ultra-close-ups. Replace the bluesy theme song with a classic rock anthem by the Who. Trade in those domestic disputes and drug-related crimes for complicated murder mysteries involving dominatrixes, bank heists, evil magicians, incest, grocery store massacres and fallen porn stars. Most importantly, substitute those subtly shaded characters with steely eyed leads who'll growl their Schwarzenegger-style one-liners with conviction.

Who else but Jerry Bruckheimer could make working at a crime lab look like a head-spinning rock 'n' roll fantasy? The flashy, fast-paced formula may not produce believable stories, but this little detail seems to concern the average viewer about as much as it concerns the average blockbuster-movie-goer: With 25-30 million viewers each week, "CSI" is the highest-rated drama on television and the third-most-popular program overall, behind the two weekly "American Idol" episodes. And, in a testament to the enduring popularity of the CSI brand, "CSI: Miami," which debuted in 2002, is currently ninth overall in the ratings, and "CSI: New York," starring Gary Sinise, is set to launch next fall. With such rapid expansion and popularity, "CSI" seems to slowly be replacing "Law and Order" as the dominant crime franchise.

Pretty impressive, for one of the silliest shows on television. While "CSI: Crime Scene Investigation" compiles lurid subjects, absurd twists and lots of swagger into a tawdry mess that manages to entertain as long as you're not paying too much attention, "CSI: Miami" is a tangle of over-the-top stories that only clumsily mimics the original show.

Alexx: [to the dead body of a bikini-clad female] Welcome to spring break. How'd this happen, sugar? All you wanted was a week of fun in the sun. Good times, hangin' out with your friends...

Horatio: Should've been the time of her life, Alexx. [Puts on sunglasses] Instead of the end of it!

The opening scenes of "CSI: Miami" have swiftly joined the ranks of the cheesiest moments in television history. Each time medical examiner Alexx Woods (Khandi Alexander) leans over the corpse du jour and coos her sincerest sympathies, and Horatio Caine (David Caruso) slips on his sunglasses and growls his angry one-liner, you can almost hear Tattoo yelling "De plane!" or Hannibal from "The A-Team" saying, "I love it when a plan comes together."

But the stories each week top the absurdity of such exchanges, and by a long shot. On one episode, a husband and wife are fleeing a hurricane when a dead body hits their windshield -- a surfer who was thrown out of the ocean and onto their car. During his investigation of the surfer's death, Horatio discovers a man living next door to the couple impaled on an iron fence in his backyard. Horatio bravely holds the man's hand as he dies, then tries to determine what happened. Eventually we learn that the husband in the car went next door to get his ladder back from his neighbor, who was boarding up his windows. The husband was annoyed and needed his ladder, so naturally he ripped the ladder out from under the neighbor, causing the neighbor to fall and become impaled on the fence. Instead of calling 911, the husband took his ladder and left the neighbor to bleed to death, then got in the car with his wife, at which point the dead surfer hit his windshield. What are the odds?

Who cares, as long as the soundtrack is bumping?

The show's stupidest pet trick is the murder that -- surprise! -- isn't actually a murder. Thus, we're treated to the dog that shoots his owner's friend by stepping on a rifle, or that spent bullet hurled into a woman's neck by hurricane-force winds. In one episode, it turns out that a girl who appears to have been murdered really just tripped, hit her head on a rock, fell into a swamp, and was sucked dry by leeches. In the same "spring break" episode that features the girl who should've had the time of her life but ended it instead, a kid gets too high on pot and has an aneurism. Instead of calling an ambulance, his friends drag him up to the roof of their hotel and jump from the roof into the hotel pool together, leaving the dead kid at the bottom of the pool. "We didn't want to get into trouble," the meddling kids explain.

While "CSI: Miami" is clearly the "Baywatch Nights" of the franchise, that doesn't keep "CSI" from veering into moronic territory occasionally. On one episode, Gil Grissom (William Petersen) and Catherine Willows (Marg Helgenberger) investigate the death of a couple who recently attended a "furries" convention with all of the leaden dorkiness of Quincy tracking down the latest club drug.

Gil: Well, Freud said that the only unnatural sexual behavior was to have none at all. And after that, it's just a question of opportunity and preference. And evidently, many prefer the feel of fur to the texture of human skin.

Catherine: Well, I like hairy chests, but I'm not about to bop a 6-foot weasel!

Later, one of the furries explains what happens at their gatherings. "It started as a scritch, then everybody got into a fur pile, and then we were yiffing." What's the relevance of this fur pile? Well, you see, a dead guy in a raccoon suit was found at the side of the road next to a dead woman in a wrecked car, and the experts suspected foul play. As it turned out, though, raccoon boy got out of the car to throw up, and a local farmer shot him, thinking he was a coyote. He stumbled out into the road, where his girlfriend ran over him in her car, then hit a truck head-on and died. Plausible, no?

But, while Petersen and Helgenberger occasionally interact in unexpected ways and with mildly interesting characters, the dialogue of "CSI: Miami" is about as compelling and nuanced as the chatter in most video games. In fact, some scenes actually look like they were ripped straight from "Grand Theft Auto: Vice City."

Horatio: So the kid is dealing for you?

Maurice: He's my best retailer -- got a growing client base. You know how crazy those junkies get.

How does TV this bad draw an audience? Look no further than the countless episodes of "The Love Boat" and "The Dukes of Hazard" ingrained in your memory. Ridiculous stories will always sell as long as they're packed in a flashy exterior. Thus, sharks and call girls and reckless teenagers propel "CSI: Miami" to the Top 10 list, while quality shows like "Boomtown" are canceled.

"CSI" lead Petersen has been outspoken about his opposition to the creation of further spinoffs, which he argues dilute the quality of the original series. In a recent interview with Playboy, Petersen griped about the inferior quality of "CSI: Miami" and openly insulted his collaborators. When asked by the Playboy reporter whom he'd like to see on the show as "guest corpses," Petersen said, "The big three would be [CBS chairman] Les Moonves, [Alliance Atlantis Entertainment Group CEO] Peter Sussman and Jerry Bruckheimer, all of whom are getting filthy rich off this show."

But if the powers behind "CSI" are shooting themselves in the foot by expanding too fast, there certainly aren't any blood spatters or spent bullets around to prove it.