In search of the perfect clamshell

Biodegradable Styrofoam seems like a no-brainer. So why has a company called EarthShell had such a hard time making money off its environmentally correct polystyrene substitute? 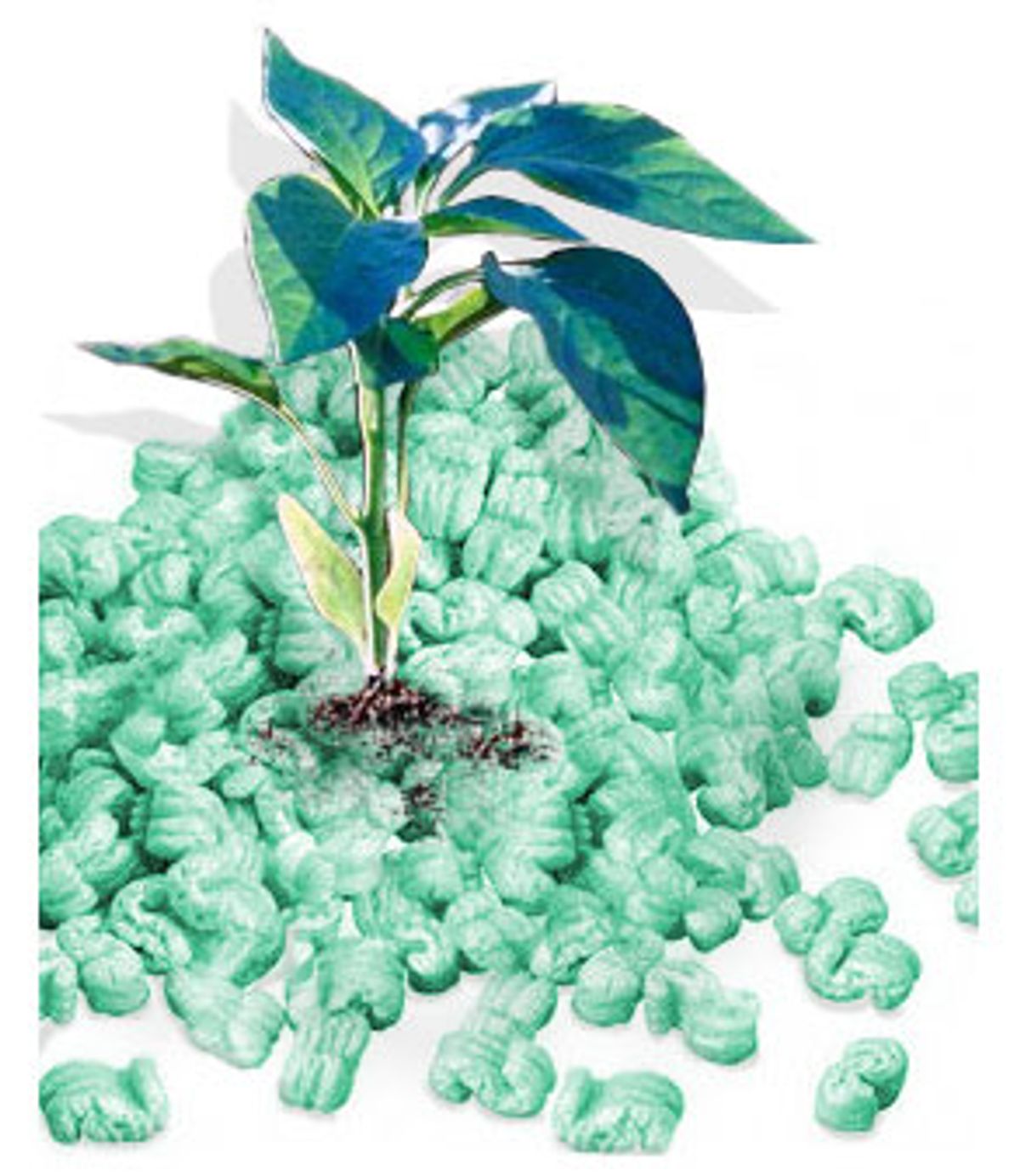 For environmentalists, few quests would seem to make as much sense as the dream of biodegradable Styrofoam. As Greg Glenn, a USDA scientist who has worked on the problem for years, says, "If you're going to have products you only use once, why make them out of material that lasts forever?"

"Styrofoam" is a trademarked word for just one type of polystyrene foam insulation manufactured by Dow Chemical. But whatever you call it, the material used for billions of snow-white "clamshell" boxes and a myriad of other objects is widely considered bad news: it's unrecyclable, it's piling up in landfills, and it may be leaching synthetic chemicals into our food.

The United States alone threw out about 800,000 tons of clamshells, cups and other plastic packaging in 2001, the most recent year for which EPA figures are available. Polystyrene manufacturers and suppliers point out that the total makes up less than 1 percent of the municipal waste stream in the United States. But it is waste that sticks around -- although no one really knows for how long, says William "Dr. Garbage" Rathje, a Stanford consulting professor and one of the country's top landfill experts, because no studies have been done that span the necessary centuries.

For 12 years, a small company called EarthShell has attempted to realize the dream, spending more than $300 million in an effort to create an environmental substitute for polystyrene: clamshells that will rot on compost heaps. But even though its products are sound -- they've been successfully beta-tested by such corporate heavy hitters as Wal-Mart and McDonald's -- the company currently faces the ignominy of potential delisting by NASDAQ because its market cap has fallen below a $35 million requirement.

So what's wrong? What's stopping EarthShell, so far, from freeing the world from the polystyrene menace?

Several problems face EarthShell. First, says company president and CEO Vince Truant, EarthShell has perhaps bitten off more than it can chew. EarthShell has not only tried to invent and design its polystyrene replacement but also attempted to invent its own equipment, instead of leaving that to equipment manufacturers.

In addition, as a green pioneer, EarthShell is in a position similar to that of the organic-foods movement a few decades ago. Somehow, EarthShell needs to make the case to consumers and the food-packaging industry that a circle of sustainability is both an environmental responsibility and a selling point.

It's an uphill battle, notes Rathje, who has consulted for EarthShell.

"EarthShell has to try and fight the [plastic and paper goods] establishment," says Rathje. "They are fighting companies who are entrenched with methodologies and materials that have a long tradition -- for God's sake, paper goes back 100 years or more, and plastics go back to the '50s, and polystyrene the '60s. If [those companies] had come up with EarthShell, it would be a major player already. But they didn't."

Small outfits as well as multinationals have been working on environmental packaging, but it'd be hard to find another firm that has laid as much on the line as EarthShell. Long term, it wants to be not a manufacturer but a licensing company with its starchy ware degrading across the globe. The question of whether it will get there is still open, but a look at where the company stands now offers an illuminating glance at the challenges in bringing environmental sustainability to the plastics factory floor.

The search for compostable polystyrene isn't purely a free-market enterprise. EarthShell has a close working relationship with a USDA research center across the bay from San Francisco, in Albany, Calif. The company and the government scientists started working together after the two camps heard about the similarity of each other's work over the years. The USDA had been working on making clamshells out of wheat starch, prompted by a 1990 mandate from Congress to find industrial uses for surplus crops. Last year, EarthShell and the USDA signed an agreement to help each other with research.

"If you look at what nature uses for a clam or an oyster, it's a shell, calcium carbonate. Those cells degrade after they're hatched," says Truant. "The primary ingredients [in the eco-clamshell] are positive for the environment. They come from the environment."

It's easy to make an eco-clamshell container -- you bake it with gooey, white batter pretty much as you would a waffle, except that you use a hydraulic press with 8,000 pounds of force. The clamshell breaks down in a compost heap in four to six months, according to EarthShell. It is very close to polystyrene by look and feel, and if you were truly starving, you could eat it, says Glenn, one of the USDA scientists working with EarthShell. But don't try; it tastes like a bad rice cake.

EarthShell's clamshell is made up mostly of starch, fiber, limestone and water, coated with a water-resistant biodegradable film. The company's plates, bowls and boxes have been tested at cafeterias at the Department of the Interior and the Environmental Protection Agency in Washington for about five years now. More than 22 million Big Mac containers with the little green EarthShell stamp have crossed McDonald's counters, signifying that even if you were a fast-food litterbug one dark night on America's highways, you could nonetheless have been an environmentally correct litterbug.

But about 2 billion pounds of polystyrene food packaging are made yearly in the United States, with factory after factory containing machinery tailor-made to produce cups, plates, clamshells and other containers. While EarthShell and the USDA's long-term plan is to invent a recipe and a process that translate to existing machinery, that hasn't happened yet. EarthShell and the USDA are basically baking batter, but many factories stamp their polystyrene products from sheets formed from kitty-litter-like pellets that undergo tremendous heat and pressure. For EarthShell to be successful, it needs factories that will cook globs into picnic plates.

So far, it's proved virtually impossible to mimic the process to manufacture polystyrene, because "starch doesn't process as well -- it doesn't melt as well," says the USDA's Glenn.

"There's no way that anyone knows of at the moment to allow for EarthShell's products to be made on existing plastics equipment," says Truant. This has led to big problems for EarthShell. In addition to the NASDAQ delisting, the company also faces overdue bills from vendors and a lawsuit from one licensing firm alleging breach of contract. Truant says the company's high burn rate came about because "in the beginning we attempted to design a lot of the equipment ourselves. That took time and money. Some things you have to leave for the experts."

Yet EarthShell is determined to prevail. Truant says Wal-Mart and McDonald's both want to buy their goods at big volume, and a new deal was just forged in which the Sweetheart Cup Co. will pay Detroit, Tool and Engineering over $5.5 million dollars to create EarthShell equipment. The company also recently signed a licensing agreement with Hood Packaging Corp., which wants to make $15 million worth of environmental EarthShell wraps over the next two years.

"Our fingernails are hurting because we've been hanging on for so long," Amitabha Kumar, EarthShell's V.P. of research and development, told USDA scientists in a meeting the other day. But then he cheered himself up by telling them that starch played a key role as a binder in another seemingly fantastic feat: building the Great Wall of China.

Perhaps if the health costs from polystyrene leaching into food were more evident, EarthShell would be having an easier time. But leaching studies are conflicting, says Theo Colborn, a former senior scientist with the World Wildlife Fund and the coauthor of "Our Stolen Future," a book about endocrine disruption from synthetic chemicals. "We just don't know," Colborn says. "Some studies have found the styrene migrates out of the products and some studies don't. I wonder all the time."

Colborn's book describes how leaching polystyrene test tubes fouled one lab experiment, mimicking estrogen. When it comes to eating out of non-biodegradable polystyrene clamshells, she is cautious: "I think we should try and avoid it all."

But why don't we recycle polystyrene as we do other materials? Mike Levy, head of the Polystyrene Packaging Council, says nobody wants to pay the price. He says his industry spent $70 million to $80 million in the 1990s to try to develop a recycling program, but the program was too expensive to keep up because the stuff has to be cleaned so thoroughly to avoid contamination -- polystyrene is a petroleum by-product. So it goes into the landfill.

Countless landfills are sealed-up tombs where nothing degrades -- even leftovers and EarthShell plates -- so at the end of the day what the USDA and EarthShell are also trying to create is compost consciousness. Fewer than 10 percent of U.S. households are composting right now, according to research estimates, and if that figure seems gloomy, think about how few people recycled anything 30 years ago. There's still hope for worms across America.

Last summer, some USDA interns cooked up tie-dyed starch plates -- Grateful Dead bio-dinnerware. Could be in a store near you one day. And if the taste and digestibility are improved, and EarthShell hangs on, maybe the future will hold a Willy Wonka-like meal where you can have your plate and eat it too.

Leslie R. Guttman is a writer who lives outside San Francisco.