The state of your unions

Mr. Tall, Dark and Handsome rocked my world. Too bad he also slapped my face and passed out. More tales from the front lines of marriage. 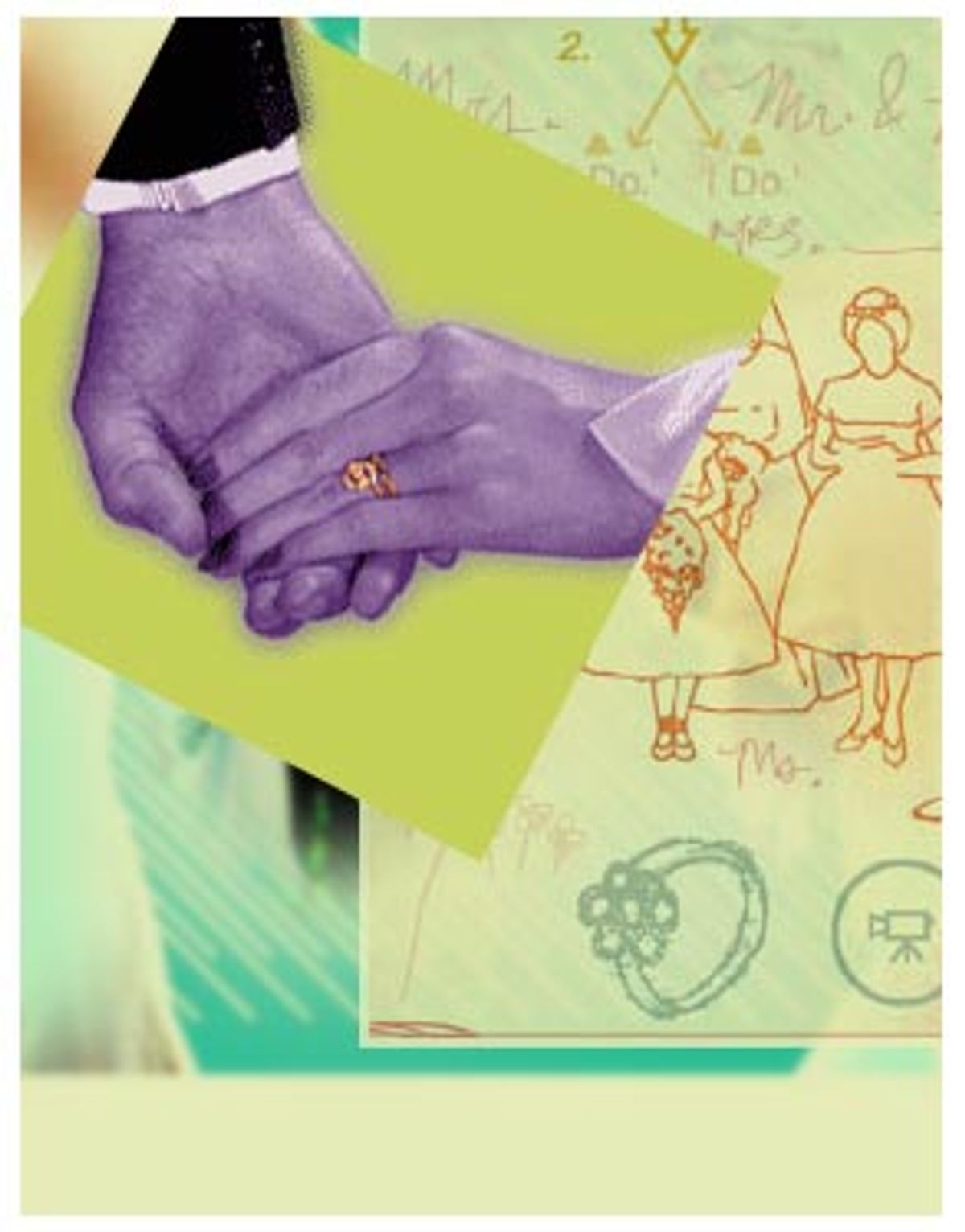 The buzzer sounded at 5 a.m. I hit the button and turned to Katie.

"Are you ready to be my legal wife?" I asked.

She kissed me and we began our morning routine. We were filled with excitement: We were heading into San Francisco to wait in line with hundreds of other gay couples for our chance to legally marry.

Katie and I had married once already. In November, we had a beautiful ceremony on a golden, sun-kissed beach in south Maui. Close friends and family surrounded us, supporting us, recognizing our love. I cried while saying my vows, overcome with emotion. It was a private, perfect day, filled with joy.

Katie and I have been together for nine years. We share dreams and goals for the future, joint bank accounts, dogs and cats. And now we had the chance to be legally recognized as a couple: Finally, we could attain the public status bestowed upon marriage.

We took BART, the public transit train, into the city, passing under the bay. Katie and I swayed to and fro with the motion of the train, smiling at each other. We got off the train at the Civic Center stop; the dome of City Hall glowed in the morning light.

News trucks sat in the square across from the building. Crews set up cameras, trained on the line snaking from the front of City Hall. My throat tightened. It was amazing to see those couples. We were all getting married!

Katie and I took our place in line -- we were 58th -- and chatted with the couples around us. City Hall opened and the line surged. We passed through metal detectors, filled out our forms and waited. Camaraderie flowed along the line; each time a couple emerged with a license, we all erupted in cheers.

Finally, it was our turn. We raised our hands, and a few keystrokes later, we were handed our forms and directed to the rotunda for our ceremony. Katie and I felt awestruck: this wasn't a simple piece of paper for us. It was a hard-earned document that gave our relationship a stamp of approval. We were no longer on the outside.

Our ceremony was on the rotunda stairs. A close friend witnessed for us, taking pictures, grinning broadly. As soon as the ceremony started, photographers and a news camera surrounded us, and I realized that we were not only making a private commitment to each other -- we were making history.

After the ceremony was over, a local news crew interviewed us. Friends saw us on the news that night. Congratulatory calls and e-mails poured in.

I take the certificate out every couple of days to gaze at it. It will soon hang on our wall, as a constant reminder of our legal marriage.

With each couple married in San Francisco, determination builds. We will never let legal marriage be taken away from us.

Choosing the right one

When my boyfriend and I got engaged, I wasn't sure if I was definitely in love with him, but I was positive he would make a good life partner. Loyal, kind and dependable, Jeff did what he said he would and didn't let you down. There were things he lacked; he wasn't the most romantic, spontaneous or exciting person I'd ever met. He was shy when it came to intimate matters and dirty jokes, but I figured this, too, was not the most important thing for me.

Right after Jeff and I got engaged, I received an e-mail out of the blue from an old boyfriend, Paul. I hadn't talked to Paul for at least three years, but apparently I wasn't far from his thoughts. He and his parents still spoke of me, and he wondered what I was up to. Writing and explaining my engagement was one of the hardest things I've ever had to do.

I had truly loved Paul, a spontaneous, exciting and romantic Australian. When Paul and I broke up, it was because the distance between L.A., where he studied, and New York, where I studied, were just too far. When he returned to Australia, the distance was even harder. It wasn't because we didn't care for each other deeply.

My indecision about Jeff did not abate -- in fact, it worsened. But despite all my reservations, Jeff and I married. Our first year required all the usual roommate negotiations: Jeff snored and I didn't sleep much as I battled my own worries. What if I'd made a mistake? What if Paul had been the right choice after all?

A year and a half after getting married, I woke up one morning with a realization: If Paul wanted me badly enough, he would have said something when I told him I was engaged.

Jeff chose me, and he has continued to choose me, while waiting for me to choose him back.

The realization made me reinvest in my marriage. Jeff and I have been married for five years now. In those five years we've moved to three different states. We've been through my thesis, his dissertation and the death of his mother. There are days when I hate doing his laundry or he hates being dragged to social events, but that's normal. When I look back now, I realize I was right about the most important things for me in a life partner. Jeff shares the hardest burdens of life with me, and its greatest joys.

Do I still think about Paul, the Australian who made me laugh and offered me adventure? Absolutely. I googled him the other day, and found a picture of him online. He's even more handsome. I can't lie: My gut still squirms painfully when I think of him.

But I've made a decision and I stick by it. My husband helps me follow my intellectual dreams and indulge my hobbies. He even folds my underwear after I do the laundry.

I believe there's more than one "right one" for each of us. It is the daily commitment to the one you choose that matters. Jeff chose me, and now, I wake up each morning choosing him. That's what it's all about.

A book and its cover

At almost 87, my grandmother only has a few minor aches and pains to remind her that she has fewer days ahead of her than behind. Her mind has remained sharp, too; the older she gets, the more likely she is to say whatever pops into her mind. Once, at the funeral of a rather large man who was a friend of the family, she loudly asked, of no one in particular, "Hunh! I wonder how they got him in that casket. You think they used a crane?"

So I shouldn't have been surprised by what she said several months ago when I introduced her to J., my then-fiancé and now third husband. She pulled me aside conspiratorially while he was greeting other members of my family and said, "He's OK-looking, but not as nice-looking as your other husbands." I patted her hand that rested lightly on my forearm and said, "Well, you can't always judge a book by its cover," then winked at her and walked away.

I had to admit she was right. J. wasn't as good-looking as either of the men who had preceded him. But at 40, I was finally old enough to know that it's foolhardy to judge a man by his looks.

I wish I had known that when I met my first husband, E., in my Spanish class when we were both seniors in college. He was everything I had been led to believe a woman could want in a man -- tall, dark and handsome. At 6-foot-3, he towered over me. He ran and he swam, and all that exertion gave him long, lean muscles that he used to move through the world as gracefully as a cat. His family was from Cuba and Spain, and he had dark hair and obsidian eyes that created a wonderful contrast with his alabaster skin. He was soft-spoken and gentlemanly -- he actually stood when a lady entered a room or left the dinner table. In my world, which was then populated by boys who wore baseball caps to dinner, even at fancy restaurants, this was immensely appealing.

After a year-long courtship, much of it punctuated with roses and other gallant acts, including a very traditional proposal on bent knee, we were married. I thought I was Cinderella, lucky enough to have married her Prince Charming and destined to live happily ever after. But "ever after" ended two weeks after the honeymoon when Prince Charming, after having too much to drink, slapped me and passed out on the living room floor.

Ten years after divorcing E., I met my second husband while in graduate school in Virginia. A. was tall, too, but in all other ways he seemed so different from my ex-husband: He was blond, blue-eyed and fair. He looked like bright sunshine after a dark storm. His disposition was sunny too -- he didn't really drink and didn't seem to have a temper. It was only after we were married that I realized -- again -- that appearances can be deceiving. What had appeared to be easygoing charm was actually an ingrained passivity about life that allowed him to go without steady employment for several years -- while I paid the bills.

When I first met J. on a blind date, he was not at all the kind of man I was used to dating. He wasn't tall -- at 5-foot-8 he was much shorter than either of my exes -- and though he was attractive, he wasn't gorgeous in that GQ kind of way. He was much too fair and had too many freckles for that. But after he moved in with me while I underwent surgery and stayed with me for weeks, taking care of me and my two large, active dogs, I realized he was everything I wanted: Maybe he wasn't tall, dark, and handsome, but he was honest and true, compassionate and kind.

Five years later, happily married -- for keeps this time -- I've finally learned that judging men by their looks can lead a woman astray. It's what's in a man's heart that really counts.