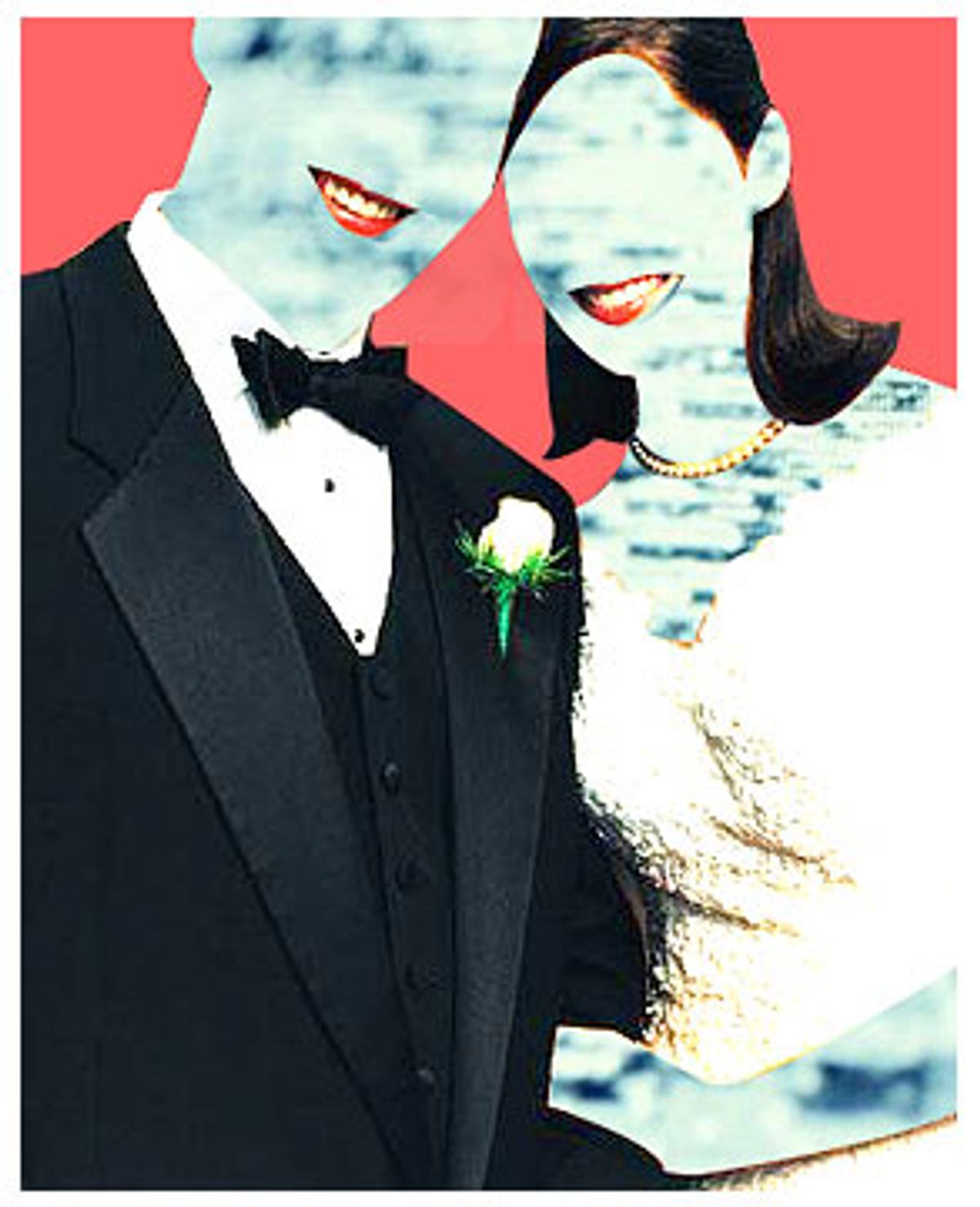 On MTV's "Newlyweds," Nick Lachey and Jessica Simpson coo and quarrel while grimacing viewers reckon how long their game of house will last. Another season of ABC's "The Bachelor" turns a marriage proposal into game-show victory: the equivalent of a new car or washer-dryer set. "The Littlest Groom," which proved that reality TV can indeed flop miserably, concludes on Fox this month. And when that network advertised "My Big Fat Obnoxious Fiancé" -- in which a woman convinces her family she's marrying a boor -- by claiming that it "rings the wedding bells to sound off the ultimate practical joke," few flinched at finding "wedding" and "joke" in the same sentence.

Its aim having shifted from depicting subjects to slyly (or not so slyly) deriding them, reality television has found a new whipping post in an age-old convention: marriage. MTV's "'Til Death Do Us Part: Carmen & Dave" -- featuring Jane's Addiction guitarist Dave Navarro and his new wife, sex symbol Carmen Electra -- joins a deluge of reality programming that playfully, irreverently -- and sometimes unwittingly -- demystifies marriage and its accoutrements: engagements, wedding plans, nuptials themselves. Wednesday night (and repeated throughout the week), "'Til Death Do Us Part" offers up its climactic episode -- a big, fat celebrity wedding.

"The mythology of marriage is coming apart in contemporary culture," asserts Sasha Cagen, author of "Quirkyalone: A Manifesto for Uncompromising Romantics." Her talked-about new book proposes that for 20- and 30-somethings, singlehood is fast becoming not a default but a celebrated choice -- boosted, in part, by reality television's "completely over the top" portrayal of couplehood and matrimony.

Kicking off months before Carmen and Dave tied the knot last November, "'Til Death Do Us Part" does what MTV does best: fluently alternate between sardonic cynicism and well-worn sentimentality. There's cuddling and canoodling, yes, but also an ominous title set in a tombstone and a pre-wedding photo shoot in which bride and groom, sporting ghastly makeup, recline in coffins.

"I always felt strongly about marriage, and I'd always wanted a fairy-tale wedding," says Electra, who -- speaking by phone from New York -- is known for flaunting her fine form in films like "Naked Movie," or the more mainstream "Scary Movie." "Dave and I already did the Vegas thing --"

"Not with each other," Navarro interjects. "Carmen with Dennis [Rodman], and me with another girl -- but years ago. The fact of the matter is, when you live the lives Carmen and I live, married life is the one stone left unturned. We've tried everything else!"

It's not the most sacrosanct vision of matrimony, but these days, reverence has as much to do with reality TV as reality does.

"Some people have asked me, 'Why get married? Why do you need that piece of paper?'" Navarro says. "I don't need a piece of paper -- frankly, I couldn't even tell you where it is. But I did need a ceremony of devotion to my wife, or a public expression of love for her."

Marriage-centric reality TV began with Fox's "Who Wants to Marry a Multi-Millionaire?" in 2000 and, then, faintly more palatable offshoots: "The Bachelor" or NBC's "Who Wants to Marry My Dad?" (Other wedding-focused reality TV shows include Fox's "Married by America," NBC's "Race to the Altar," TLC's "Wedding Story" and the memorable Fox special "Bridezilla.") All perfected the art of paying lip service to marital sanctimony even as their over-the-top premise -- meet your match on a televised game show! -- undermined it. One "Bachelor" couple after another faltered in their path to the altar, leaving only "bachelorette" Trista Rehn and her chosen man, Ryan Sutter. Their televised wedding, the reality genre's stab at sincerity, ended up being just the opposite: 17 million viewers, 5,000 yards of pink ribbon, 30,000 roses and 1,500 pounds of chocolate turned nuptials into three-ring circus.

Like "Trista and Ryan's Wedding" -- or its more economical foil, TLC's "For Better or For Worse," in which couples let budget-conscious friends plan their big day -- "'Til Death Do Us Part" is a pre-wedding reality show that climaxes with the wedding itself. Focusing on the ceremony's dynamics -- over and above the couple's -- helps tone down cynicism: Divorce rates being what they are, it's easier to plan a party than a partnership. And since nowadays folks rarely have just one, "For Better or For Worse" is a crash course on how to throw a wedding IKEA-style: on the cheap and in a jiffy.

"I think my reality-TV low point was seeing Trista and Ryan on a cellphone commercial with a wedding-planning theme," says Cagen. "Consumer culture has fully absorbed the wedding planning process to the point of its being laughable."

Emphasizing marriage plans instead of marriage itself is also a way for narratives to evade undue pessimism. From 19th century novels ("Pride and Prejudice") to recent romantic comedy ("The Wedding Singer," "The Wedding Planner") and drama (HBO's "Sex and the City," which saved matrimony for last), marriage is happy when it's a happy ending. Stories that begin with couplehood reveal what happens when the honeymoon's over -- and thus make good comedy: "I Love Lucy," "Married With Children" and their reality-TV counterparts "Newlyweds: Nick & Jessica" and "The Osbournes," also on MTV, mine the humdrum hemming and hawing of marital life for satirical laughs.

Generating those laughs are yin-and-yang couples like Carmen and Dave. While sweet-faced Carmen is prone to earnest statements like "I didn't feel grounded until I met Dave," a more sardonic (and more heavily tattooed) Navarro will riff on the couple's "beauty and the beast" effect: "Carmen is a hundred times more attractive than Jessica, and I'm a hundred times uglier than Nick."

But in the end, a sitcom is a sitcom; "'Til Death Do Us Part," "Newlyweds" and "My Big Fat Fiancé" are -- at least on some level -- reality. That fact produces a palpable irony: As gays around the country fight for the right to make wedding vows, reality TV revels in the right to make an all-embracing -- and fiscally rewarding -- mockery of them.