Back by popular demand, our video game junkies review "Mafia" and breathe heavily over the "Bra & Panties" match in the new "Smackdown." 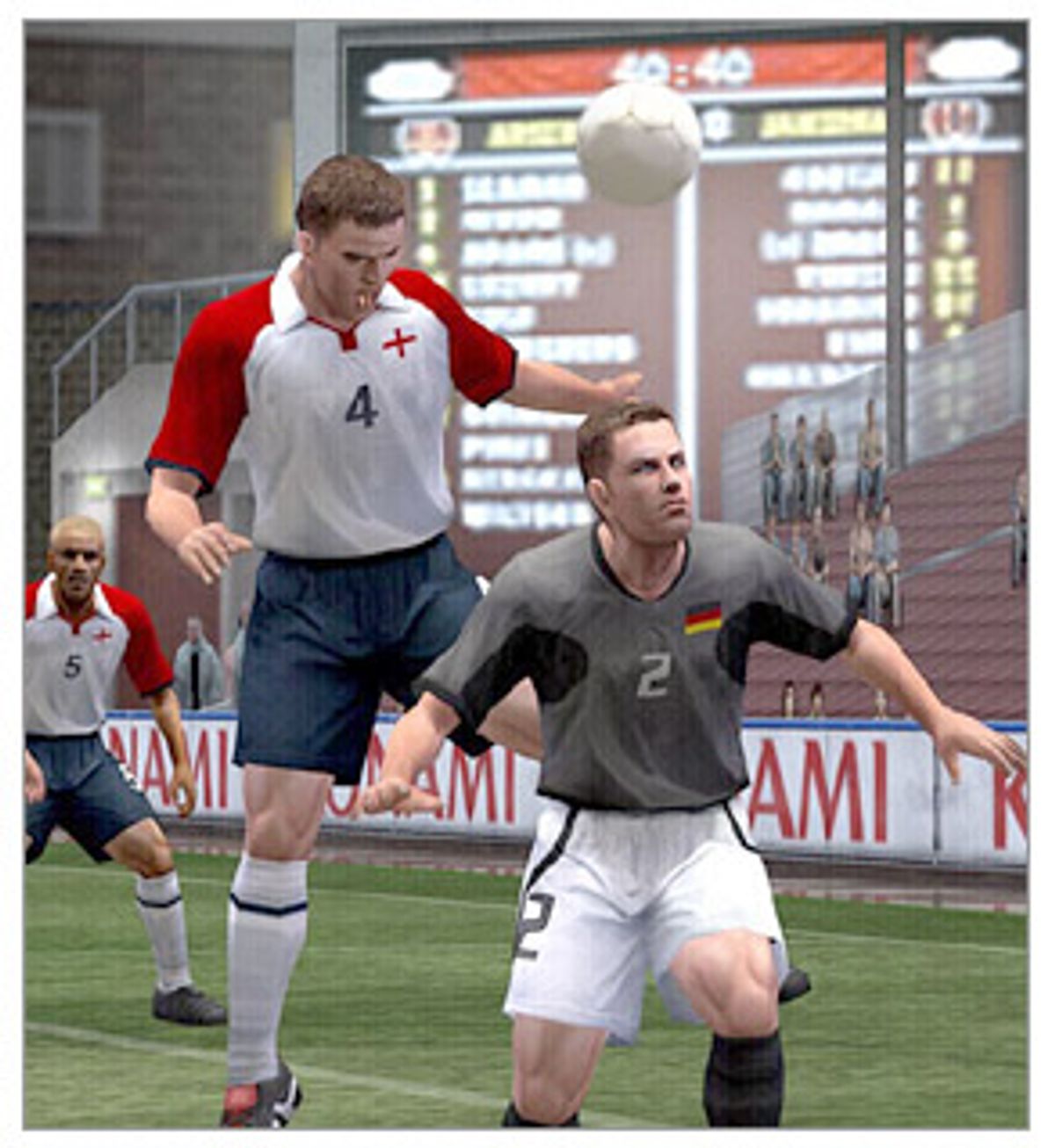 Jeff: Based on the box and instruction booklet, "Mafia" seems heavily reliant on "The Getaway" for its overall look and feel.

Tom: "The Getaway" itself having leaned conceptually hard on "Grand Theft Auto: Vice City." Both are terrific, sui generis games, though. I don't blame people for copying them.

Jeff: Everyone wants to be a gangsta. "Vice City" had the pastel-clad crime world of 1980s Miami, and "The Getaway" gave us the underworld of contemporary London. "Mafia" takes us back to the mythic roots of the genre -- into the world of American organized crime circa 1930. I'm thinking Capone, Cagney . . .

Tom: If this is a 1930 "Grand Theft Auto," then I assume we can look forward to dancing the Lindy, sleeping with flappers, running moonshine, stuffing ballot boxes for Mayor Daley and tommy-gunning snitches.

Jeff: We open with some truly beautiful cinematic flybys of the awkwardly named little neverland of Lost Heaven, where "Mafia" takes place.

Tom: This game looks really, really good -- amazingly good, in fact -- in these opening sequences. Some great water effects, the sound is phenomenal, every Lost Heavenite has a different gait, the buildings look nicely grimy, and the clouds and sun are rendered with crystalline care. I'm told the PC incarnation of this game is even better, but it looks pretty great on the Playstation. Everywhere you look is graphical singularity and differentiation. Already I'm impressed.

Jeff: Are you noticing all the Czech names in "Mafia's" credits? Look at this: Pavel Cizek, Tomas Hrebicek, Vaclav Kral.

Tom: We inflicted on Eastern Bloc gamers the indignity of "Rush'N Attack." I don't believe we have much right to complain if these Czech programmers feel like making sport of U.S. mobster iconography.

Jeff: And this game has an epigraph! It uses Romans 15:1 as an epigraph! Not even "Hitman 2," the most operatically bombastic game we've ever played, had the audacity to use an epigraph.

Tom: And now we've got a 10-minute-long intro sequence.

Jeff: I hate this. I just hate it. Video games are not movies. Not yet. The faces are nicely rendered but their mouths and bodies move like animatronic robots. I'd rather hear a well-written voice-over narration with some nice stills than see these clumsily animated "dramatic" sequences.

Tom: Looks like our character, Tommy, is a snitch. He's talking to a cop about dropping a dime on his boss Salieri.

Tom: Whose voice, sadly, is not provided by F. Murray Abraham.

Jeff: It looks like at least a sizeable part of this game takes place as Tommy narrates to this cop his accidental life in the mob, which means you're playing levels that are flashbacks.

Tom: That's ... kind of odd, isn't it? If it's a flashback, and you're telling someone what happened, how, then, do you die? I confess the narrative implications of this are kind of blowing my mind.

Jeff: And yet you seem to have come to terms with the millions of resurrections you've experienced in your life as a gamer. All right. Finally. Here we go. Tommy's story begins. It turns out he's a humble cab driver who first crosses paths with the mob when they jump into his cab as they're running from a rival gang. Go, man! Get them out of there!

Jeff: Are you in a Brubaker or something? A Brubaker's a car, right?

Jeff: This just now occurred to me: Is it a good idea to create a car-chase game set in a time when going to South Hampton was a three-day journey?

Jeff: Please speed up. I can't take this. If I wanted a documentary experience of 1930 I'd rent a Ken Burns movie.

Tom: Be patient -- though I have to admit I'm not crazy about "Mafia's" clarinet-reliant jazz soundtrack. It sounds like a Woody Allen movie's opening-credit sequence.

Jeff: It says in the instructions here that you have the option of a "speed limiter" to prevent you from speeding. It also says that if you're ticketed by the cops you have to get out of the car and pay the fine they give you. Is this a driver's-ed game? Did the highway patrol put this out?

Tom: These games never really reveal their true quality until you're gunning people down. You know that.

Jeff: This game needs a new slogan. "Go back to a time when cars were slow and crime sucked! Strap yourself into a Model T and turn on your speed limiter: 'Mafia' will take you on the ride of your life!"

Tom: Look, we gave them the slip. So now I guess I'm in the mob. Next board is yours.

Jeff: You're sorely mistaken. We're not in the mob yet. Before we can join the mob we have to drive around Lost Heaven as a law-abiding taxi driver for an hour. "Mafia" is developing video-game muscles I didn't even know I had: how to drive 24 miles an hour; how to get from point A to point B without breaking any laws; how to respect life and property.

Tom: I think in the next mission you get to do mob-type stuff.

Jeff: Yeah, maybe we'll get to load crates of moonshine onto a truck or something. Or toilet-paper a rival gangster's house. Or go around sticking bananas in people's tailpipes.

Tom: I'm still willing to give "Mafia" a chance.

Jeff: Sorry, but in my admittedly idealized video-game universe it should not take more than 70 minutes of play to get to the Good Parts.

Tom: I'm so going to smack you down.

Jeff: When did the WWF become the WWE anyway?

Tom: Actually, I don't know. The WWE lost a legal battle with the World Wildlife Fund or something. I haven't watched wrestling since I was in junior high. I'm going to go out on a limb here and say any pro-wrestling fan older than 15 should probably be sterilized.

Tom: And my word, they've really done a loving job rendering the back and chest hair of George Steele, haven't they? What a weird cultural moment that was, when thousands of people were cheering for a guy on the other end of middle age pretending to be a turnbuckle-eating, semi-retarded ape-man. I'm going with Ric Flair. The figure-four leglock!

Jeff: Very good gameplay. The graphics are excellent. When you punch people, a constellation of sweat explodes off their faces. The moves are fluid and nicely varied -- and there are a lot of them.

Tom: While you're admiring the game, I'm beating you with a foldout chair. I have to say, I rather like this "taunting" button. I taunt you, George Steele!

Jeff: People bleed in this game. You've just made the Animal George Steele bleed! I'm fleeing the ring. And somehow I've wound up in a parking lot.

Tom: You've got a fine wrestling game when you can chase your opponent out of the ring, into the backstage area, into the stadium's bowels, into the dressing room, out into the garage and finally across the parking lot.

Jeff: Not to mention the fact that you can hop into a forklift and use it as a weapon.

Tom: Or throw manhole covers at each other.

Jeff: Or spray each other with fire extinguishers.

Tom: It really is the little touches, isn't it?

Jeff: The character-creation options are mind-boggling, and a bit complicated. You can create a wrestler and give him or her everything from a "feminine" style to a "groove" style. And you can customize their movements right down to the angle at which they tauntingly cock their heads.

Tom: OK, knock it off. You could have probably become a WWE wrestler in the time you've wasted designing your stupid character.

Jeff: They've given us lots of different rings and match options, too. Cage matches, ladder matches, something called "Hell in a Cell"--

Tom: What is this "Bra & Panties" match?

Jeff: I have no idea.

Tom: Yeah, I know. But the object really is to strip your opponent to her undies.

Jeff: They certainly honor their constituency over at WWE headquarters, don't they? Do they really have these types of matches? Like, could I catch them on Thursday nights?

Jeff: I just tore off your halter top and threw it into the crowd!

Tom: I'm still strangely titillated. Are you getting the feeling that the whole of "Smackdown! Here Comes the Pain" was merely a pretext for these programmers to work out their sexual kinks by animating women savagely tearing off each other's clothes?

Jeff: I think it's in everyone's interests to keep Freud out of these discussions. It's incredibly fun, though. You have to give the "Bra & Panties" match credit for that.

Tom: I will make a confession, and I don't know what it means, and I'm not sure I want to know, but we could spend the next six hours tearing the clothes off each other's wrestlers and I wouldn't mind.

Jeff: Yea, truly this is the Game of all soccer games.

Jeff: Your dislike of soccer, and soccer games, is noted.

Jeff: However, sophisticated lovers of sport -- true aficionados of what Pelé called "the beautiful game" -- will be happy to know that "WE 7" remains, for sheer gameplay, the best title available. As far as we know. I say that having not yet played Electronic Arts' "FIFA 2004," so it's kind of hard to compare them. But if "FIFA 2004" is anything like last year's version, it will be superior to "WE 7" only in superficial ways: better commentary, music, presentation and what have you. And because EA has better licensing agreements, when you're playing the Dutch national team, instead of hearing the announcer say "Von Mistelroum," as he does in "WE 7," he'll properly say "Van Nistelrooy." But if you can look beyond the cosmetics, this game is great.

Jeff: The great Dutch striker. He plays for Manchester United.

Tom: Oh. All I remember is that "WE 6's" commentary was so laughably bad that we had to change the language to Spanish or German so it would sound better.

Jeff: That feature, alas, is missing in this incarnation. But check out the improvements in the way the players move, the way the ball bounces around. It's really astonishing -- these programmers have had to recreate physical laws from the ground up, and in this game, unlike any other sports title I've played, I feel like all the Newtonian laws are at work. The referee is bit quick to pull out the cards, though.

Tom: "Gallaraga passes to Garralaga. Rallagera passes to Gallaraga." Remember that "Simpsons" bit? Hilarious. That episode was just savage on soccer: "Fast-kicking! Low-scoring!" And we all know "The Simpsons" is never wrong.

Jeff: Look at this. Just enjoy the ballet of soccer. It feels just like a real game. The subtleties of midfield passing, the slow build up until you can exploit the defense's weaknesses ...

Jeff: That's because they've made it so lifelike. All of these AI opponents behave with such plausibility that I can't just dribble up the entire field and shoot. At the difficult level, the game forces you to play soccer. Except for the fact that you can smoke cigarettes while you do it.

Tom: You know, everyone complains about American culture poisoning the world. Does anyone ever complain about European culture and its lame-ass soccer manifestations poisoning our culture? I resent soccer and everything it stands for.