Advice to Kerry: It's all about heart

It's not enough to be smarter than George W. Bush -- you've got to show some real feeling. 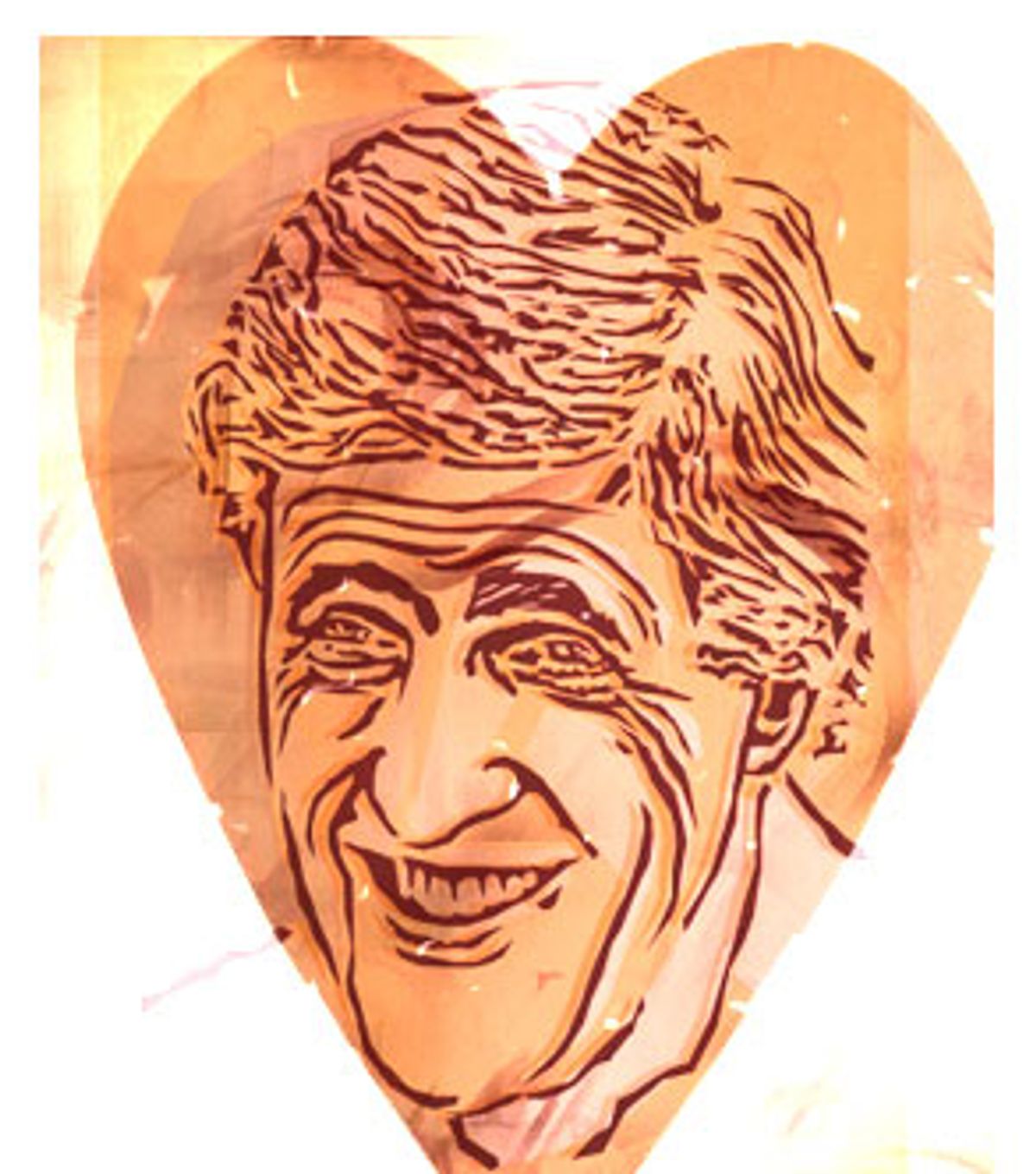 Having locked up the Democratic presidential nomination, Sen. John Kerry is programmed to spend virtually every waking hour between now and Nov. 2 campaigning or raising money. In the interest of electoral success, though, it would be far more valuable for him to take a long break, get in touch with his feelings on the key issues of our day and learn how to convey those feelings to the public.

The contrasting TV sound bites by Kerry and George W. Bush on same-sex marriage illustrate, almost painfully, why the challenger will need to dramatically improve his connection with voters on emotional issues if he is to win in November. On Feb. 24, the day he came out for a constitutional amendment to ban same-sex marriage, Bush was portrayed with the usual TV set lighting in a beautiful room at the White House, speaking calmly and with decorum about his support for a constitutional amendment stipulating that marriage should only be between a man and a woman. Kerry, in an AP videotape shown on AOL, was caught between campaign appearances; he was grim and uncomfortable, and spoke irritably:

"I believe as a matter of belief that marriage is between a man and a woman, that's my belief. If the amendment provides for partnership and civil union, which I believe is the appropriate way to extend rights, that would be a good amendment. I think that you need to have civil unions, that's my position. Everybody's known my position, there's nothing new about my position, it's been my position all the time that I've been in the Senate and throughout this race. I'm for civil unions. And I think that that is permissible within the state law, and ought to be, that's what I'm in favor of." [Emphasis added]

It is clear from this example, which is only one of dozens, that Kerry shares the same problem as Al Gore. He has not yet grasped what Bill Clinton and George W. Bush have intuitively understood: that the race for president is more about character, feelings and personality than positions or statistics. Swing voters in particular -- the roughly 20 percent of the electorate who by definition do not vote on a basis of party, policy or ideology -- are deeply influenced by their feeling toward the person they are entrusting with their lives.

Many Washington types, including the author, winced when we heard Jimmy Carter speak of wanting a government "as good as the American people," or Ronald Reagan speak of America as the "City on a Hill," or Bill Clinton say "I feel your pain," or George W. Bush's claim to be a "compassionate conservative." But they were largely successful because they, and/or their handlers, knew that these personal kinds of value statements were the deeper messages needed to reach swing voters.

CNN commentator Bill Schneider is right when he says the contest for the presidency is "the most personal vote" citizens cast. Policy, the state of the economy and international affairs count, of course. But people are also looking for something in the president that they seek in no other politician: a personal connection. The presidency is the only political office in America that still retains vestiges of the age-old combination of secular and sacred power. Many people, particularly in the post-9/11 era, want a president who will make them feel safer. And they make this judgment, often unconsciously, on the basis of their heart not their head, what they feel more than what they think. Kerry's successes in winning Massachusetts Senate elections and Democratic primaries are not directly relevant to what he will need to do to win the presidency.

An issue like same-sex marriage is a particular litmus test for a politician because it evokes so many deep feelings in people. Marriage directly impacts everything from our psyches and emotions to our finances, health and children. However one feels about it, few people are neutral on the subject. And the question of gays strikes even deeper chords in many people -- perhaps men in particular. One can debate the exact nature of the unconscious anxieties that photos of two men kissing trigger in the psyches of many American males, but the bottom line is this: It's not a pretty picture.

When addressing issues like this, Kerry needs to first go within and get in touch with his own feelings on the subject, and then seek to communicate directly, on a heart-to-heart basis, with potential voters who also feel deeply about the matter. In this case, for example, he might have made the following statement, but in such a tone and manner that made clear he had thought deeply about the issue and was approaching it with some emotional intelligence, with feeling:

"As a happily married man whose relationship with my wife is at the center of my life, I understand why people feel so deeply about marriage. On the one hand, I think we should all be moved by the joy and happiness of couples in San Francisco who are so movingly demonstrating their commitment to each other. On the other, I do believe that the institution of marriage has historically involved the union of a man and woman, usually for childbearing purposes, and I do not believe that the federal government should tamper with this tradition. After long thought, I have come to feel deeply that recognizing civil unions between gays is the best way to both honor their commitment to each other and to preserve the institution of marriage as we know it.

"As president, I will do what I can to encourage all people in our society to commit to loving relationships, whether in marriage, as I prefer, or in other arrangements which promote caring, love and long-term devotion."

John Kerry's tendency to speak in terms of positions and talking points is only part of his problem in communicating to voters from the heart. He also can be thin-skinned, and has a disastrous tendency to sound like a caricature of a politician by speaking a series of sentences that each end on a rising note. It's unclear why so many politicians do this. But one thing is sure: It's completely unnatural. No one talks this way in their day-to-day life. A politician speaking from his heart and hoping to convey a sense of his own struggle with a difficult issue would avoid this artificial cadence like the plague.

The above is written more out of sorrow than anger. I've been acquainted with John Kerry for over 30 years, and admire his courage in breaking with the government's Vietnam policy. I also applaud his genuine understanding of, and commitment to, the causes of saving the biosphere and creating a new international order.

I believe a continuation of Bush's policies will turn America into a second-rate power, and wreak worldwide havoc, for generations to come. His deficits will slowly erode our economic strength and burden our children and grandchildren with our debt. His neglect of global warming, biodiversity loss, aquifer depletion and ocean pollution is destroying the biosphere, and will thus threaten the very structure of human civilization. His military policies will increase the threat of terrorism and weaken our national defense. His unilateralist foreign policy has already proved a failure, as the U.S. military finds itself barely able to occupy Iraq; the "Bush Doctrine" was dead a few months after it was declared. His support for the rich at the expense of the poor will further shred the social contract. John Kerry on his worst day would be an incomparably better president than George W. Bush on his best.

But I also supported Al Gore and learned, as did we all, that being smarter than George Bush is not enough. Nor is hiring Bob Shrum and suddenly becoming a born-again populist.

Kerry learned one important lesson from the 1988 Dukakis debacle, and has promised to vigorously respond to all attacks, personal and political, against him.

But he needs also to learn the other lesson that the Dukakis experience taught us: You don't answer questions of deep personal feeling about issues like rape, abortion or homosexuality with positions. And voters want a lot more than a candidate capable of responding angrily to attacks. They want an empathetic connection, a sense that a potential president is an authentic human being, someone with a good mind and a good heart.

If Kerry is to win, he has to first connect with his own feelings about the issues, and then communicate his feelings to voters. What is needed is not a mere cosmetic change. Better speechwriters or snappier one-liners will not really help.

He needs to reach within, return somehow to the time before he became a senator, to a time when he acted from his heart more than his head. He needs not only to understand his principles and policy positions, but to feel them.

Talk of feelings is not popular among the Washington elite. The George Willses and Jeff Greenfields literally turn up their noses when the subject is raised. But there are no more important issues than feelings and character when it comes to presidential politics. Just ask Al Gore, who unfortunately discovered his voice only in the aftermath of the 2000 election. We can only hope this does not happen with John Kerry.