Middle-aged Penthouse Forum has become an improbable voice for family values -- as long as you turn your wife over to the cable guy. 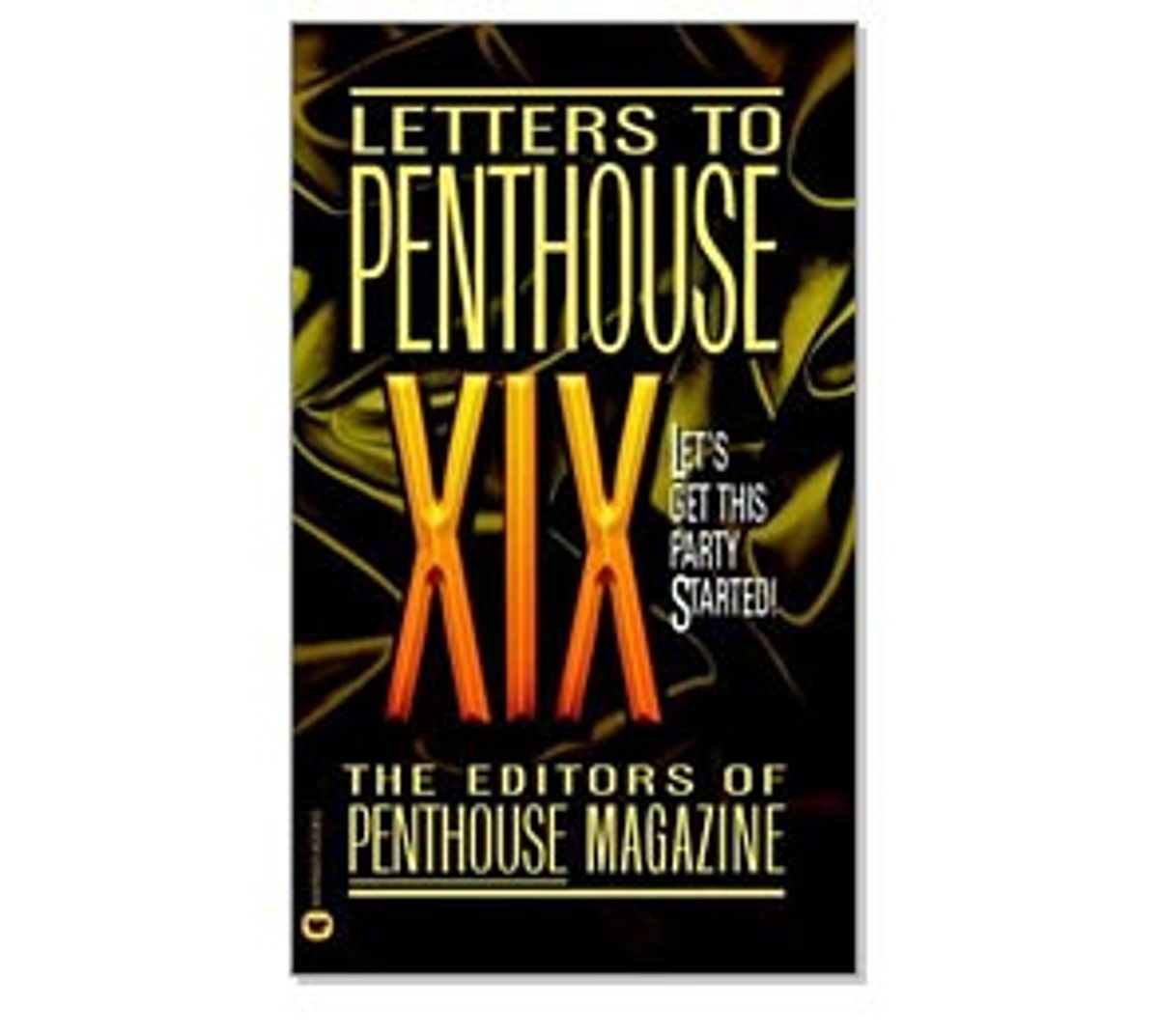 Time has passed since the Penthouse Forum offered cutting-edge titillation; 384 pages of sucking and fucking, with a smattering of edgier nastiness, really isn't all that in an era of the Super Bowl flash -- or, more important, the Internet, where a video of a famous hotel heiress is available for quick download for $50, and porn bloggers explore predicaments Penthouse readers could never imagine. The impact has devastated Penthouse, whose publisher filed for Chapter 11 last summer, and many bet on a complete overhaul by a new owner. It's been a humbling fall for Penthouse, which burst on the scene 40 years ago, a Playboy imitation that dallied on the edge of kink. America's definition of that edge, though, has changed radically; Penthouse's really hasn't.

What is most interesting about "Letters to Penthouse XIX" is that the magazine's readers, apparently, haven't changed much either. I would go so far as to say that, contextualized, the majority of the "reader" encounters in "Letters" amounts, shockingly, to an affirmation of family values.

There are 69 stories in "Letters to Penthouse XIX" (get it?). In 39 of those stories, a committed, most often married, heterosexual couple gets it on, and whether they're alone or, more likely, some hot stud or sex kitten has joined them, the sex reinforces the man and woman's relationship with each other. Chapters bear matrimonial titles like "His Wife Surprises Him by Showing Up at His Hotel in Sexy Undies, and in Heat," "Nothing Excited Him More Than Seeing His Wife Get It On With His Best Friend," "And They Thought Bringing the Wives Would Spoil Their Just-Guys Weekend" or, for Pete's sake, "A Beautiful Quarter Century Only Affirms the Love They Share Together." A typical beginning to a hot group grope goes, "Recently my wife and I tried swinging as a means of spicing up a long-time monogamous marriage. It worked like a charm." In stories throughout sections called "Clusterfucks," "Three for All," "Open Season" and "Someone's Watching," the protagonist sets up a scene with a third and maybe a fourth (or, in the case of one prodigious wife, a tenth), to satisfy a desire shared by his or her significant other who, in more ways than one, gushes his or her consent. Sometimes a guy's wife goes nympho on him, and he happily gets to watch, jacking off while she gets serviced by a dude with a huge dong. Or his wife goes lesbo, and he joins in, screwing her while she eats out her big-breasted friend. Even when the wife hasn't scored her husband's prior consent, the pokings of an errant prick prime the marital pump. In "Want to Spice Up Your Marriage? How About Seducing a Delivery Guy?" the narrator's husband walks in on her "fuckfest," and the result is elevating: "It was the first time in months his cock had gotten hard for me..."

The session usually ends with the wife indulging the husband in a loving, reassuring screw. Even when the husband hasn't been privy to the preceding action, the fuck at the finale affirms the nuptial purpose of the extramarital play: "As she glanced down at the dried come that had dripped down her thighs, a feeling of pride overcame her. On this night she had been the sexy, desirable woman that her husband had dreamed of. Obviously being a little slutty had its rewards. It was with a feeling of fulfillment that she got dressed and returned to our room. After hearing the story, I was so turned on that I was about to burst. Seeing my dilemma, Peggy smiled and removed her dress, saying, 'Well, I've been fucked twice tonight -- but I bet I can be even more slutty with my own husband!' And she proceeded to prove that she could. That experience really changed our sex life." In the only story in the book in which a husband blatantly cheats on his wife, we're led to believe she's such a shrew that we hardly blame the poor bastard: "I'm married to a jealous, insecure, conservative, homophobic woman who only likes to fuck every other month, which frankly isn't enough for me."

Not that the woman sitting next to me on the subway reading the New Testament, Matthew 12, while I read "Three Male Strippers and One Curious Wife Make His Vacation Extremely Exciting" wouldn't have tried to cast the demons out of me had she known what I held in my lap. The sex in the book is hardly monogamous, and despite the bucket-loads of fertile, unsafe jism shooting out of unsheathed cocks into all manner of unprotected orifices, it is certainly not intended for procreation. And there are a few surprising transgressions of the het guy norm, including straight, married men sucking dick, and one venturesome fellow going bottom-up for a bona fide bisexual encounter. But, where even casual encounters between singles can elicit expectations of the forever-after fuck, the book as a whole ultimately reaffirms the hegemony of the stable heterosexual couple. (A former editor at Penthouse told me that, as she recalls, a number of letters were written from prison, which adds a particular poignancy to the longing for a hot married life.) In other words, despite Penthouse magazine's infamously failed turn toward hardcore in recent years, "Letters to Penthouse XIX" is just the type of tame stuff savored by Penthouse readers, who former "Leg Show" editor Dian Hanson recently told the Globe and Mail were "married men 36 to 50, seeking a little spice."

She might have said they're married white men because, if this volume is any indication, the most disappointing preoccupation of the Penthouse readership is a fetishization of a racist stereotype, the "big black" stud. In "She Meant to Be a Faithful Wife, But She Lusted After Big Black Men," a Caucasian couple goes to a hip-hop club, where they pick up Leroy, who has a "gigantic" member, tears at the narrator's dress "savagely," and who talks like he's in a blaxploitation flick: "You can't handle it, mama. This big black cock would split your little white belly in half!" Since race isn't always a part of the scene, some of the protagonists in the book could be African-American, but the color of the cock is only noted when it's black and it's not the protagonist's. All of the book's nice couples, it would seem, are white.

Where a couple encounters an African-American lover -- all of whom are male in this book -- their sex life is saved, and their marriage is reinvigorated by the potency of black "manhood." "He Wanted to Give His Wife a New Experience with Someone Bigger, Younger and Blacker" ends, "Since that session with Brad, our marriage and our sex life has been better than ever. We are considering a second session with him one of these days, but neither of us is in a hurry. Julie says she is grateful for the experience, but I am the one she loves. My advice to all you guys is to give this kind of gift to your wife, at least once. You'll never regret it, and she will love you all the more." In other words, "all you guys" are white, and the story provides racist reassurance to its white male readership that the black stud, mighty though his prowess may be, is servant to the assertion of white male romantic and sexual hegemony. He may have the white wife for a session, but only insofar as the experience serves to reaffirm her commitment to her white husband.

Betsy Andrews is a writer living in New York.