Did the Saudis buy a president?

How much money has flowed from the House of Saud to the Bush family and its friends and allies over the years? No one will ever know -- but the number is at least $1.477 billion. 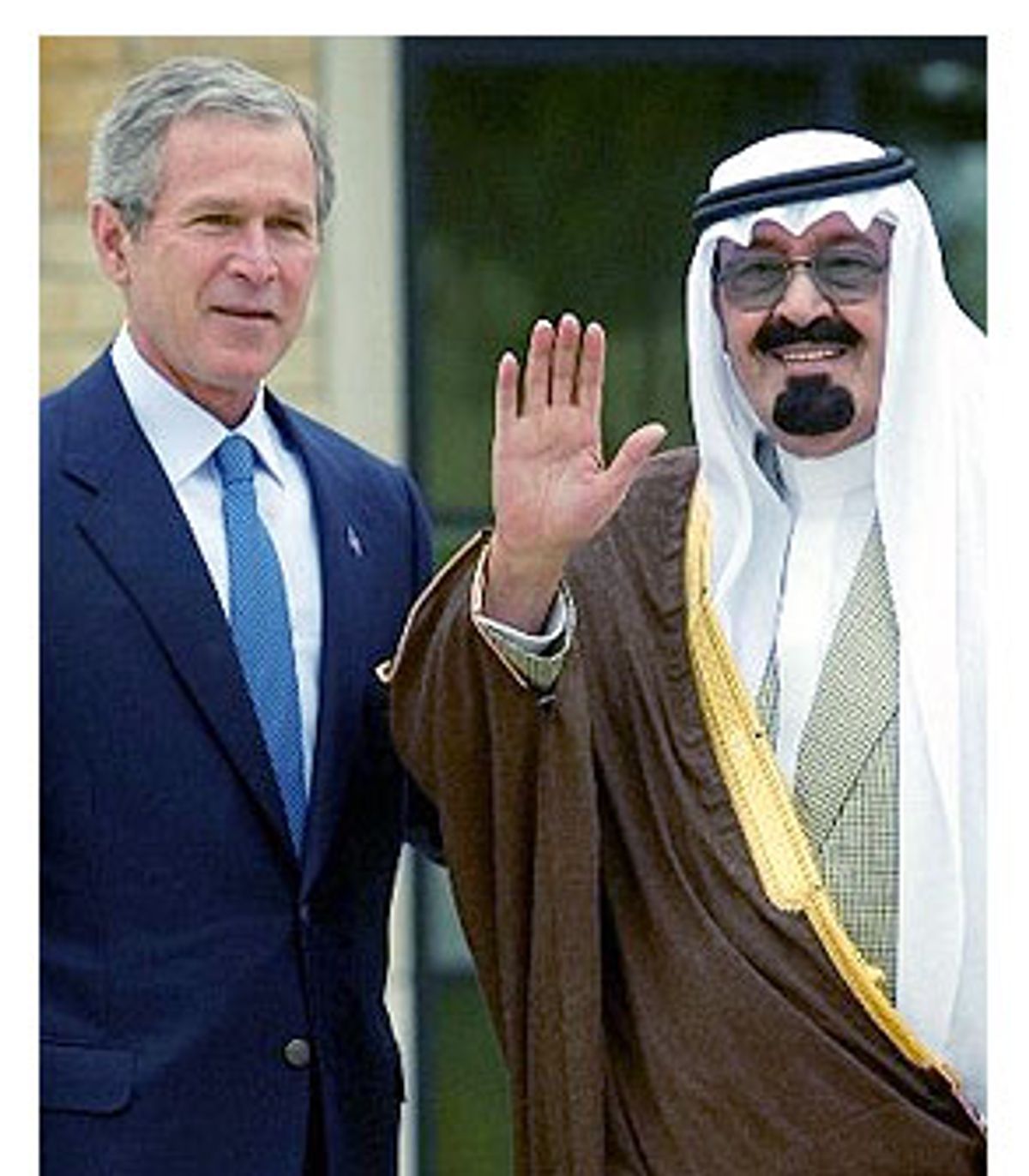 Editor's note: Part 2 of Salon's exclusive excerpt from "House of Bush, House of Saud," to be published on March 16 by Scribner. Read Part 1.

March 12, 2004  |  If the Saudis had been happy with the presidency of George H.W. Bush -- and they were -- they must have been truly ecstatic, in the summer of 2000, that his son was the Republican candidate for president. Indeed, the relationship between the two dynasties had come a long way since the seventies when Saudi banking billionaire Khalid bin Mahfouz and Salem bin Laden had flown halfway around the world to Texas to see James Bath, George W. Bush's old friend from decades before. Even bin Mahfouz's subsequent financing of the Houston skyscraper for James Baker's family bank or the Saudi bailout of Harken Energy that helped George W. Bush make his fortune were small potatoes compared with what had happened since.

The Bushes and their allies controlled, influenced or possessed substantial positions in a vast array of companies that dominated the energy and defense sectors. Put it all together, and there were myriad ways for the House of Bush to engage in lucrative business deals with the House of Saud and the Saudi merchant elite.

The Saudis could give donations to Bush-related charities. They could invest in the Carlyle Group's funds or contract with one of the many companies owned by Carlyle in the defense sector or other industries. (People tied to Carlyle as partners, advisers, counselors or directors of its companies have included the most powerful people in the world: Former president George H.W. Bush, former secretary of state James Baker, former British prime minister John Major, former secretary of defense Frank Carlucci and former head of the Office of Management and Budget Richard Darman.)

James Baker's law firm, Baker Botts, represented both the giant oil companies who did business with the Saudis as well as the defense contractors who sold weapons to them. Its clients also included Saudi insurance companies and the Saudi American Bank. It negotiated huge natural gas projects in Saudi Arabia. It even represented members of the House of Saud itself. And the firm's role was not limited to merely negotiating contracts. When global energy companies needed to devise policies for the future, when government bodies required attention, Baker Botts was there.

And the Saudis were also linked to Dick Cheney through Halliburton, the giant Texas oil exploration company that had huge interests in the kingdom.

How much did it all come to? What was the number? Where did the money go? With the understanding that the sums were paid by both individuals and entities to both individuals and entities, for diverse purposes at different times, it is nonetheless possible to arrive at a reckoning that is undoubtedly incomplete but which by its very size suggests the degree and complexity of the House of Bush-House of Saud relationship.

Then there were the corporate transactions. In 1987, a Swiss bank linked to BCCI and a Saudi investor bailed out Harken Energy, where George W. Bush was a director, with $25 million in financing. At the Carlyle Group, investors from the House of Saud and their allies put at least $80 million into Carlyle funds. While it was owned by Carlyle, BDM and its subsidiary Vinnell received at least $1.188 billion in contracts from the Saudis. Finally, Halliburton inked at least $180 million in deals with the Saudis in November 2000, just after Dick Cheney began collecting a lucrative severance package there.

In all, at least $1.476 billion had made its way from the Saudis to the House of Bush and its allied companies and institutions. It could safely be said that never before in history had a presidential candidate -- much less a presidential candidate and his father, a former president -- been so closely tied financially and personally to the ruling family of another foreign power. Never before had a president's personal fortunes and public policies been so deeply entwined with another nation.

And what were the implications of that? In the case of George H.W. Bush, close relations with the Saudis had at times actually paid dividends for America -- certainly in terms of Saudi cooperation during the Gulf War, for example. But that carried with it a high price. The Bushes had religiously observed one of the basic tenets of Saudi-American relations, that the United States would not poke its nose into Saudi Arabia's internal affairs. That might have been fine if the kingdom was another Western democracy like, say, Great Britain or Germany or Spain. By the late '90s, it was clear that Saudi Arabia, as much as any other country in the world, was responsible for the rise of Islamic fundamentalist terrorism. Now that Islamists were killing Americans in the Khobar Towers bombing and in Kenya and Tanzania, America's national security was at stake. What had previously been considered a purely domestic issue for the Saudis -- the House of Saud's relationship to Islamist extremists -- was now a matter of America's national security. Hundreds had already been killed by Saudi-funded terrorists, yet former president Bush and James Baker continued their lucrative business deals with the Saudis apparently without asking the most fundamental questions.

Now, of course, George W. Bush was closing in on the White House. It remained to be seen how, if elected, he would deal with the Saudis and the global terrorist threat. Federal election laws prohibit foreign nationals from funding American political candidates. But the Saudis were not like last-minute holiday shoppers. They had begun buying their American politicians years in advance.

What follows is a compilation of financial transactions through which individuals and entities connected with the House of Saud transferred money to individuals and entities closely tied to the House of Bush. The House of Bush is defined here as George W. Bush, George H.W. Bush, James A. Baker III, Dick Cheney and the major institutions that they are tied to, including the George H.W. Bush Presidential Library, the Carlyle Group and Halliburton. The House of Saud includes members of the Saudi royal family, companies controlled by them and members of the Saudi merchant elite such as the bin Laden and bin Mahfouz families, whose fortunes are closely tied to the royal family.

The list that follows is by no means complete. It was not possible to obtain the particulars of many business dealings between the House of Bush and the House of Saud, and as a result, those figures are not included. For example, the client list of the Houston law firm of Baker Botts includes Saudi insurance companies, the Saudi American Bank and members of the House of Saud itself, which Baker Botts is defending in the $1 trillion lawsuit filed by the families of the victims of 9/11. Because the payments made to Baker Botts are not publicly disclosed, they are not included. Likewise, Khalid bin Mahfouz was a partner in developing the Texas Commerce Bank skyscraper at a time when Baker was a major stockholder in the bank. Because the exact size of bin Mahfouz's investment could not be determined, it is not included.

It is worth adding that many other figures in the administration have close ties to Saudi Arabia through various other corporations that are not included in this list. Condoleezza Rice served on the board of directors of Chevron from 1991 to 2001. Among Chevron's business links to Saudi Arabia -- which date back to the 1930s -- are a 50 percent stake in Chevron Phillips Saudi Arabia to build a $650 million benzene and cyclohexane plant in Jubail, Saudi Arabia, and a joint venture with Nimir Petroleum, a Saudi company in which Khalid bin Mahfouz is a principal. These figures are not included. Finally, the Carlyle Group has owned a number of other major defense firms such as United Defense and Vought Aircraft that have had major contracts with Saudi Arabia, but their contracts are not included either. As a result, what follows is likely a conservative figure that may significantly understate the total sum involved.

Former president George H.W. Bush, James Baker, and former prime minister John Major of Great Britain all visited Saudi Arabia on behalf of Carlyle, and according to founding partner David Rubenstein, the Saudis invested at least $80 million in the Carlyle Group. With the exception of the bin Laden family, who extricated themselves from Carlyle not long after 9/11, Carlyle declined to disclose who the investors were. But other sources say that Prince Bandar, several other Saudi royals, and Abdulrahman and Sultan bin Mahfouz were prominent investors and that it was an explicit policy of the House of Saud to encourage Saudi investment in Carlyle.

Contracts between Carlyle-owned corporations Carlyle and Saudi Arabia -- BDM (including its subsidiary Vinnell): $1,188,600,000

The Carlyle Group owned defense contractor BDM from September 1990 until early 1998. One BDM subsidiary, Vinnell, has trained the Saudi National Guard since 1975, thanks to a controversial contract that allowed it to be the first U.S. private firm to train foreign forces. While under Carlyle ownership, BDM's and Vinnell's contracts with Saudi Arabia included the following:

In 1994, BDM received a $46 million contract to "provide technical assistance and logistical support to the Royal Saudi Air Force."

Between 1994 and 1998, Vinnell serviced an $819 million contract to provide training and support for the Saudi Arabian National Guard (SANG).

In 1996, BDM got a $44.4 million contract from the Saudis to build housing at Khamis Mshayt military base.

In 1997, just before BDM was sold to defense giant TRW, the company signed a $65 million contract to "provide for CY 1998 Direct Manning Personnel in support of maintenance of the F-15 aircraft."

Vice President Dick Cheney served as CEO of Halliburton from 1995 to 2000. At press time, he continued to hold 433,333 shares of Halliburton in a charitable trust. Among Halliburton's dealings with the Saudis, those whose details have been made public include:

In 2000, Halliburton subsidiary Kellogg, Brown, and Root was hired, along with two Japanese firms, to build a $40 million ethylene plant.

After George W. Bush became a director of Harken Energy, several entities and individuals connected to BCCI, the scandal-ridden bank in which Khalid bin Mahfouz was the largest stockholder, suddenly came to Harken's rescue. Among them, the Union Bank of Switzerland agreed to put up $25 million. When that financing fell through, Abdullah Taha Bakhsh, who was also close to bin Mahfouz, stepped in to help.

It is worth pointing out that in terms of charitable donations, the House of Saud has been truly bipartisan and has contributed to every presidential library over the last 30 years. Many members of the House of Saud have directed their largesse to charities important to powerful Americans, including a $23 million donation to the University of Arkansas soon after Bill Clinton became president. The donations below represent those from the House of Saud to charities of personal importance to the Bush family:

2003: Prince Bandar gave a $1 million oil painting of an American Buffalo hunt to President Bush for use in his presidential library after he leaves the White House.