The raunchy jockey is mobilizing his army of listeners against Bush -- and they could make a difference in November. 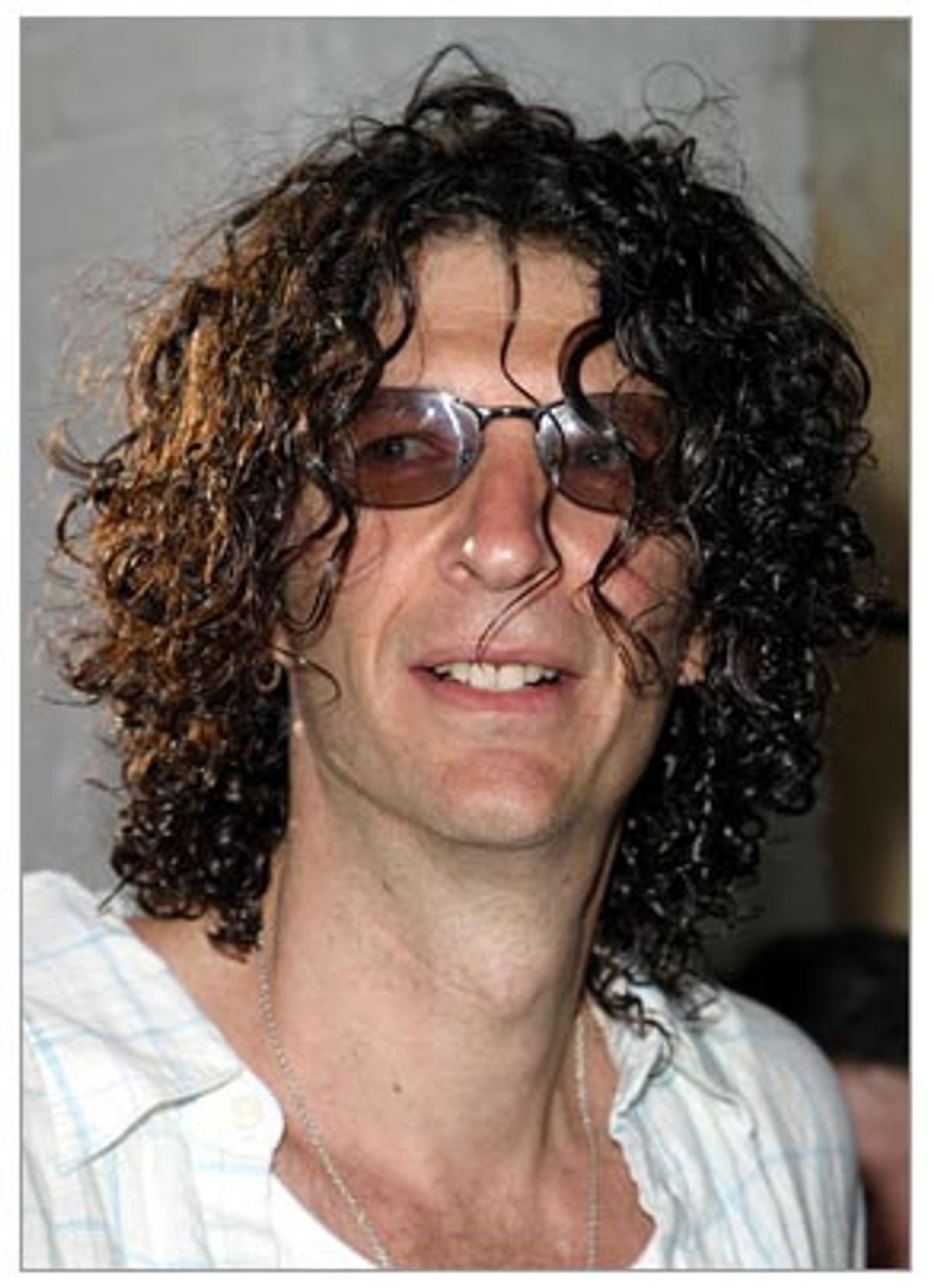 Declaring a "radio jihad" against President Bush, syndicated morning man Howard Stern and his burgeoning crusade to drive Republicans from the White House are shaping up as a colossal media headache for the GOP, and one they never saw coming.

The pioneering shock jock, "the man who launched the raunch," as the Los Angeles Times once put it, has emerged almost overnight as the most influential Bush critic in all of American broadcasting, as he rails against the president hour after hour, day after day to a weekly audience of 8 million listeners. Never before has a Republican president come under such withering attack from a radio talk-show host with the influence and national reach Stern has.

"The potential impact is huge," says Charles Goyette, talk-show host at KFYI in Phoenix. "And it's not just with the 8 million people who tune it, it's that he breaks the spell. Everybody's been enchanted by Bush, that he's a great wartime leader and to criticize him is unpatriotic. Now Stern pounds him every day and it shatters that illusion that the man is invincible and he shouldn't be criticized."

"He's got one of the biggest audiences in all of radio, and perhaps the most loyal," says Michael Harrison, publisher of Talkers magazine, the nonpartisan monthly that covers radio's news/talk industry. "And that's why he's so dangerous for the White House."

Stern had strongly backed Bush's war on Iraq, but in the past two weeks, he has derided the president as a "Jesus freak," a "maniac" and "an arrogant bastard," while ranting against "the Christian right minority that has taken over the White House." Specifically, Stern has assailed Bush's use of 9/11 images in his campaign ads, questioned his National Guard service, condemned his decision to curb stem cell research and labeled him an enemy of civil liberties, abortion rights and gay rights.

In other words, it's the kind of free campaign rhetoric the Democratic National Committee couldn't have imagined just one month ago.

"Our research shows many, many people in the 30- to 40-year-old range who were Bush supporters are rethinking that position and turning away from Bush because of what Howard Stern has been saying," says Harrison.

Coming in tandem with Wednesday's announcement that the much-talked-about liberal radio network Air America will debut at the end of the month, there's an indication that Republicans may finally get a taste of the commercial talk-radio wars, which for years have tilted almost uniformly to the right and teed off on progressive causes and politicians.

"Overnight, Stern's probably increased by an important percentage the amount of talk-radio airtime that is not right-wing," notes Martin Kaplan, associate dean of the University of Southern California's Annenberg School for Communications. "His show does make a difference in terms of media ecology and what's out there. It's letting people know how they feel is an acceptable way to feel. What the media do is put out a version of what's normal. And if all that's out there is Rush Limbaugh and Dittoheads, then centrists and progressives see themselves as the minority. But if you can hear voices on the airwaves that sound like the voice in your own head, you begin to realize it's a polarized, 50/50 nation."

Kaplan will host a nightly media affairs program on Air America. [Salon.com will contribute one story each day to Air America's programming.]

Stern's sustained FM taunts come at a tough time for the White House, which has watched Bush's approval ratings fall to new lows. Even more disturbing for Republicans was the revelation in the latest USA TODAY/CNN/Gallup poll that Bush's traditionally strong support among male voters is down significantly, and that Bush actually trails Kerry among those voters.

"That's the demographic Howard Stern targets specifically," says Goyette. "If Bush's grip on men continues to soften, he could be in big trouble."

Anecdotally, those daily phone calls from listeners -- mostly men -- who tell Stern they usually don't vote, but this year they're definitely going to vote against Bush (and it's usually against, Bush not for Sen. John Kerry) cannot be comforting to the Bush/Cheney '04 strategists.

"Karl Rove and the White House would have to be brain-dead to not know they have a problem here," says Goyette.

There are early signs that Bush supporters are indeed nervous about Stern's crusade. This week Limbaugh wrote a newspaper Op-Ed column dismissing Stern's claims against Bush as coming from "the left-wing fringe." (Stern returned fire, labeling Limbaugh a Bush "lackey.")

Stern's torrent of Bush barbs came in the wake of Clear Channel Communications' move in late February to pull Stern off six of its stations, condemning his program as "vulgar, offensive and insulting." Following the controversial Super Bowl halftime show featuring Justin Timberlake and Janet Jackson, Clear Channel, like most major broadcasters, was under scrutiny over allegations it broadcast indecency. Clear Channel's radio chief was scheduled to testify before Congress where he was sure to face hostile questioning. On the eve of that congressional appearance, Clear Channel, which had never raised serious concerns about Stern's show before, suspended the program from its radio outlets.

Clear Channel's move appeared to be more a symbol than a substantive effort to shut Stern down. The communications giant carried the shock jock only in six markets. Viacom's Infinity Broadcasting -- a Clear Channel competitor -- is Stern's syndicator and main radio vehicle.

But Stern quickly complained on-air that the real reason Clear Channel yanked his show was that just days earlier he'd begun questioning the president and praising comedian/commentator Al Franken's anti-Bush book "Lies, And the Lying Liars Who Tell Them." Stern insisted it was political speech, not indecency, that got him in trouble with the San Antonio broadcasting giant, whose CEO, Lowry Mays, is close to the president and the Bush family. The jock still condemns Clear Channel and its Republican connections, but most of Stern's firepower today is directed squarely at Bush and his close association with the religious right, which Stern says is the driving force behind the FCC crackdown on indecency.

Some in the broadcast business see Stern, perhaps best known for ushering into radio "Lesbian Dial-a-Date" contests, as a corporate clown whose political influence is not on par with the likes of Don Imus, the syndicated shock jock turned smart-aleck pundit. "Who cares what Howard Stern thinks about people running for public office?" says one longtime radio executive. "Imus is different, that's more of a thinking guy's show. With Howard, it's pure narcissism."

Yet Stern has proven his political clout in the past. Known mostly for his libertarian take on politics, in 1992 he made news by endorsing Republican Christie Todd Whitman for governor of New Jersey, and she then won in an upset over Democrat Jim Florio. (She repaid the favor in 1995 by naming a New Jersey highway rest stop after the jock.) Stern has also backed Republican George Pataki for New York governor. "When Stern says he helped Pataki win," says Goyette, "I don't think anybody doubts that."

That's because of the bond Stern has built with his fans. "He's got a passionately loyal audience, which includes many extremely affluent and white-collar listeners," notes Paul Colford, who wrote an authorized biography of Stern, "The King of All Media." "However he wants to play his most recent grievance, he's got a nucleus of tens of thousands of fanatics who are willing make the phone calls and send e-mails and show up at Times Square to protest, whatever the course of action may be."

"They're addicted to this guy and that's an awesome power," says Harrison. "Stern has moral authority with these people, in part because he has not been beating the drum for a political agenda for all these years."

It's that relative absence of political discussion on Stern's show in the past that might make the current anti-Bush barrage more influential. "The fact that his audience does not tune in to him to hear about politics means that he is not just preaching to a choir, in the way that most of the conservative talk-show hosts are doing," says David Barker, author of "Rushed to Judgment: Talk Radio, Persuasion and American Political Behavior." It's an audience, he suggests, that might be more open to persuasion from a broadcaster like Stern.

Approximately 8 million listeners tune in each week. And at any given moment during his four-hour program roughly 1.4 million people are tuned in. By way of comparison, that's more than the number of morning viewers at any given time watching Fox News, CNN and MSBNC -- combined.

"There's no question," says Harrison, "Stern is the sleeping giant of liberal radio."