Decoding humanity, down to the last atom

Glyn Moody's "Digital Code of Life" tells the story of the bioinformatic revolution: The merging of computers and molecular biology. 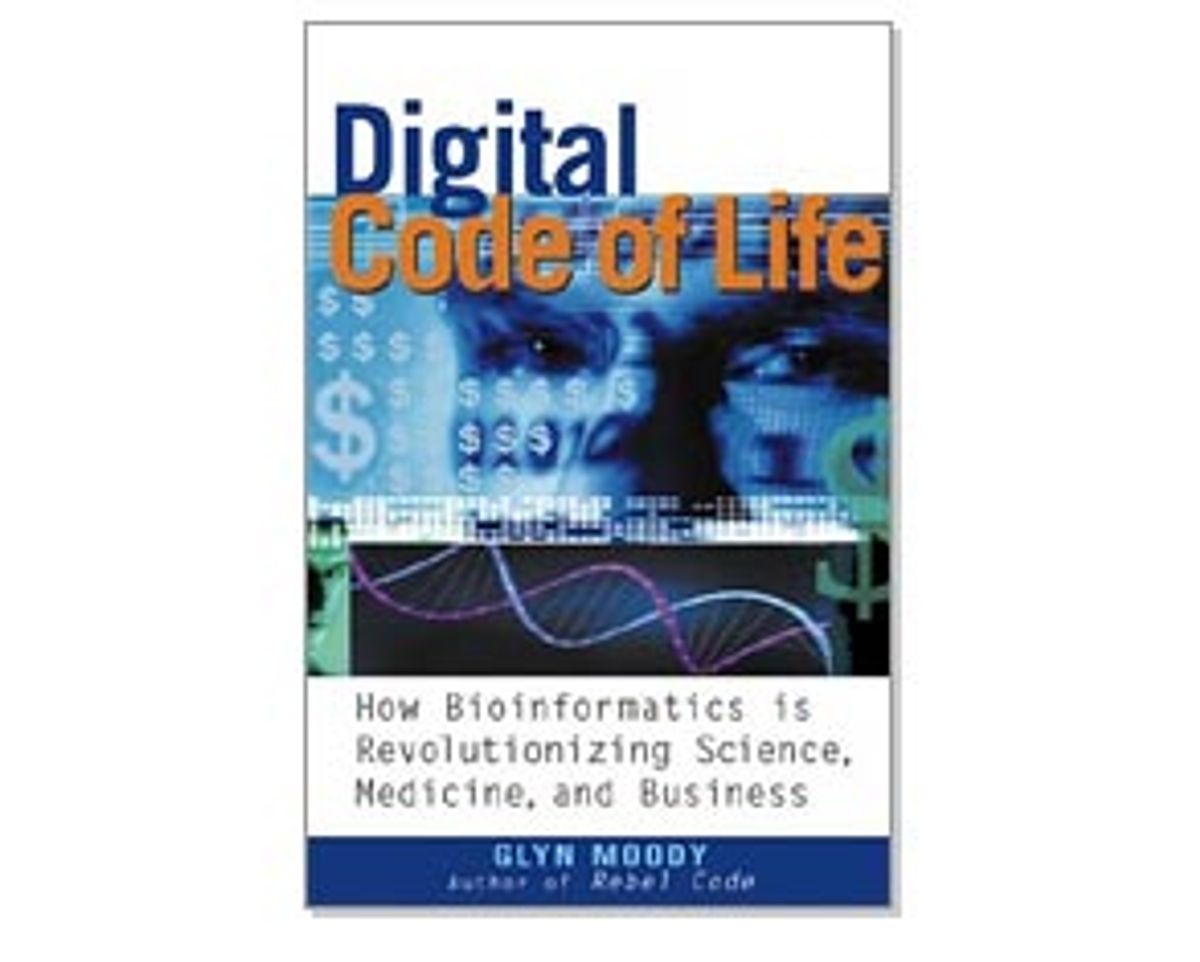 There is a fascinating moment near the end of "Digital Code of Life" where the fundamental premise of the book -- that advances in computing technology have made it possible to fully understand our biological makeup -- is brought into profound question. It's one thing to "elucidate" the human genome, and provide a map of all 30,000-plus genes in our species. That's been done. It's a task of an another order of magnitude to provide a similar map of all the proteins created as a result of our genetic instructions. That's in progress.

But to finish the job, making clear a complete picture of a human cell that takes into account its DNA, proteins, and all the manifold molecular interactions between the various pieces, would result in a concatenation of data whose "resulting complexity exceeds the ability of the human mind to comprehend it in its totality."

In other words, the end of the quest to fully understand our biological nature would, in a way, bring us back to the beginning. One might be tempted to say to our computers, "well, thanks for nothing."

Such rudeness would probably be misplaced. As Moody meticulously documents in "Digital Code of Life: How Bioinformatics is Revolutionizing Science, Medicine, and Business," the state of the art in modern molecular biology would not be possible without computers. The resulting research will likely lead to medical advances that will significantly extend human life and fight some of our deadliest killers -- such as cancer -- to a standstill.

Bioinformatics is defined by Moody as "the marriage of molecular biology and computing." Ever since James Watson and Frances Crick came up with their theory of DNA as providing the blueprint for genetic structure, further research in molecular biology has gone hand in hand with advances in computing. This is in large part because DNA itself is a code similar to the code in a software program. Today, the disciplines of computing and molecular biology are inseparable, and what has been wrought is astounding. It is not inconceivable that the day is fast approaching where my daughter will go to the doctor, have a tiny prick of blood analyzed, and be delivered with a genetic analysis revealing not only her susceptibility to specific diseases, but a recommendation as to the treatments most likely to be of benefit in fighting those diseases.

Even casual observers of the computing industry are aware that the processing capability of computer chips has accelerated unabated over the last 50 years. What may be less obvious is the correlating rate of increase in what we know, scientifically, about our own bodies, as a result of that steadily increasing computer power. Hundreds of thousands of scientists around the globe, in academia and the corporate world, are engaged in a massive research effort to understand who and what we are down to the last atom. In this world, the much-ballyhooed decoding of the human genome is just a preliminary step in a vast journey. There's still a long way to go, and the finish line may be theoretically impossible to reach, but the rate of progress is still incredible.

In his dense, highly detailed account, -- which, all too often, reads as if it were a composite of the abstracts of a decade's worth of groundbreaking papers in the journals Science and Nature laid end to end -- Moody does his level best to explain the research that has been made possible by advances in computing hardware and software. This is not a book for the casual beginner -- those without significant grounding in biology will find it heavy going.

It's not surprising that a book about a topic as complicated as the intersection of biology and computing would be complex itself. What is more surprising are the choices Moody made in how to tell the story.

Moody's last book was "Rebel Code: Linux and the Open Source Revolution," one of the better books to be written about the free software movement. There are some very significant linkages between the free software movement and bioinformatics. Central to both has been the tension between those who want to share their information (or code) and those who want to keep it secret for proprietary commercial advantage. In the world of cutting-edge genetic research this is a hugely controversial issue -- the race between the private company Celera and the publicly funded Human Genome Project to be the first to come up with the full human genetic map (a story that occupies several chapters of "Digital Code of Life") is just one instance of that tension.

For science to progress most quickly, researchers need access to everyone else's data -- nowhere is this more true than where the nature of the science at hand is increasingly a matter of manipulating data, as it is in modern molecular biology. But the business of modern medicine is based on the proprietary ownership of patents and intellectual property rights that are key to the extraction of profit from new drugs and therapies.

Moody glancingly touches on these issues -- it would be impossible not to, given his topic -- but rather than make that tension the subject of his book, which would give his whole story powerful narrative force, he instead chooses to make the science the central character. Everything else -- the controversies, the personalities of the scientists involved, the trade-offs between commercialization and pure science -- becomes ancillary to the actual details of the research. It's an odd choice for a writer who was one of the very first to identify the power of free software (with a story on Linus Torvalds and Linux in Wired in 1997) in a mainstream publication.

The struggle between free software advocates and Microsoft over how best to write and license programming code is of most interest to programmers and observers of trends in computing. But the struggle over who owns the code that defines our very genetic nature should be of central interest to each and every human living on this planet. As the 21st century progresses, it could turn out to be one of the most important struggles in human history. Who gets to own our data? Who gets access to it? How are the interests of pharmaceutical companies, health insurers, and society to be balanced?

Moody does not ignore these issues, but neither does he dwell on them. Instead, he plunges as deeply as he can into the (often stultifying) complexities of genomic science. If his main goal was to demonstrate how current research would be impossible without computers, then he succeeds wildly. But if he also meant to convey to readers just how crucial to society the issues generated by such research are, he is a little less triumphant.