Methane hydrates, locked deep beneath the ocean floor and Alaska permafrost, could be the next great energy source. That is, if they don't blow up in our faces and dangerously accelerate global warming. 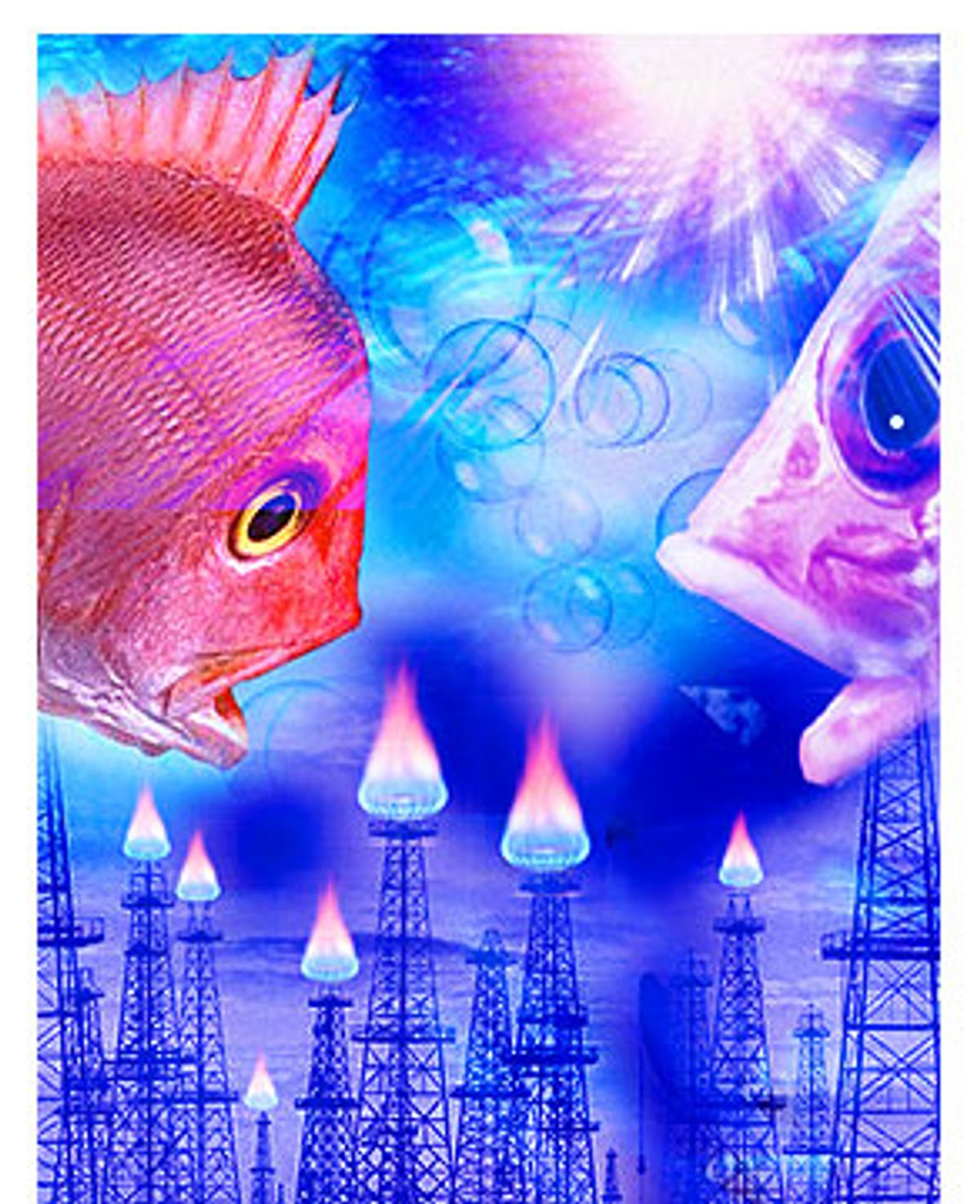 Methane hydrates can respond quite violently to perturbations in their temperature-pressure environment. Eight thousand years ago, over a thousand cubic miles of quivering methane hydrate beds exploded when the seas above them got too warm. They slid almost 500 miles off the continental slope into the Norwegian Sea, leaving behind massive craters on the seafloor and setting off gigantic tidal waves that drowned miles of coastline.

Fifteen thousand years ago, climate scientists hypothesize, methane hydrate meltdowns may have unleashed enough heat-sucking methane into the atmosphere to shoot the global temperature up by 10 degrees Celsius, an abrupt finale to the last ice age.

Methane hydrates can be dangerous, drilling them for gas is expensive, and environmentalists are wary of their exploitation. So why, then, is the U.S. Department of Energy paying oil companies and others $50 million to plunge their rotating drills into the seafloor and permafrost in search of the fiery ice?

It isn't easy to study these strange formations. Most of the world's methane hydrates lie buried hundreds of feet under the ocean floor. Once liberated from the temperature-pressure matrix that holds them in icy thrall, hydrates rapidly dissociate into invisible methane gas -- vast quantities of it.

For most of the last century's Age of Cheap Oil, methane hydrates have been little more than an academic curiosity. But that's changing fast. At the end of December 2003, an international consortium including BP, Chevron, and U.S. and Canadian geologists succeeded in capturing what may turn out to be the holy grail of hydrate technology: They transformed hydrates from under northern Canada's permafrost back into gas and captured the stuff.

"We heated them to 55 degrees Celsius," explains the U.S. Geological Survey's Tim Collett, "but you probably only have to go to 12 degrees Celsius ... We proved the technology with more or less conventional oil and gas techniques."

"Now we have to look at the economics," Collett adds.

But in the United States, domestic gas supplies have started to decline. In 1998, the Texas gas industry had to drill 4,000 new wells in order to keep natural gas production steady; the following year, they had to drill 6,400 new wells to do the same. In the Gulf of Mexico, the number of drilling rigs looking for gas shot up by 40 percent between 1996 and 2000, but produced virtually the same amount of gas. The situation in nearby Canada isn't much better: Between 1998 and 2007, despite the planned drilling of more than 100,000 wells, Canadian natural gas production is expected to essentially remain flat, energy analysts say.

Getting more natural gas from foreign gas fields won't be possible without cooling the gas to negative 162 degrees Celsius so it can be shipped in liquid form, an expensive, terrorist-attracting activity. Worse, comments natural-gas analyst Julian Darley, "almost all the new country sources are either unstable, potentially unfriendly, or Muslim -- or all three."

Methane hydrates, on the other hand, can be found in the Gulf of Mexico, Canada and Alaska. The challenges of commercial-level production, though, are stiff. Observers call Japanese methane-hydrate drilling efforts "horrifically dangerous." If a fist-size piece makes its way up the pipe, it emerges at the surface as an explosion of up to 40 gallons of flammable gas. Piercing the hydrates can unleash even greater hazards, as they sometimes act as plugs on gigantic bubbles of volatile gas.

Plus, "when you produce the hydrates, it actually cools itself," Collett says. "If you depressurize it without adding heat, it becomes colder and colder, so you drive yourself back into the hydrates' equilibrium range." As a result, current techniques to extract gas from hydrates are estimated to cost six times more than for conventional oil and gas reserves.

Sounds bad, but in the 1980s it cost 15 times more to extract oil from Canada's vast stretch of tarry sands than from a conventional oilfield. By 2003, government subsidies and technological advances had transformed "unconventional" tar sands into conventional oil reserves, catapulting Canada's reserves above those of Iraq and second only to Saudi Arabia's. Energy ministers and oil companies are betting the same might happen with methane hydrates.

"If the current momentum is sustained," says the Energy Department's Tom Mroz, "it is likely that U.S. consumers will see some energy as a result of producing gas from hydrate reservoirs by 2015." With abundant beds of methane hydrates in its otherwise resource-poor territory, energy-hungry Japan has forked out hundreds of millions to unlock methane hydrate riches, similarly forecasting 2015 as the hydrate-gas start date.

Environmentalists are not keen about the prospect of opening up multiple methane hydrate mines. "We cannot afford to burn more than a small fraction of traditional gas resources, much less mine new frontiers," complains oceanographer and climate change scientist Jeremy Leggett. "Thinking of burning methane hydrates is like opening a Pandora's box knowing a murderous and quite probably genocidal genie lurks within it," he says.

One problem is that "much more methane escapes during the production and processing of natural gas than had previously been realized," Darley says. Methane is 20 times more powerful a greenhouse gas than carbon dioxide, so a mere 3 percent rate of leakage from ever-lengthening gas pipelines can undermine the environmental benefits of burning it instead of oil. According to the latest available EPA figures, pipelines and wells in the U.S. leaked around 1.5 percent of their methane into the atmosphere in 2000. Worldwide, leaky gas pipelines and other gas infrastructure could be spewing as much as 2.3 percent, according to the International Energy Agency.

Texas A&M University oceanographer Ian MacDonald has spent his career diving under the Gulf of Mexico's towering oil rigs, studying the orange and white bacterial mats and 6-foot-tall tube worm colonies that feast on yellowed mounds of methane hydrates. He thinks exploiting the giant resource to feed the world's thirsty machines is a good idea. "The more gas we can use the better, if we have to use fossil fuels," he says. "If gas hydrate could accomplish that, I would be all for it."

But a pedestrian matter such as fuel is nothing compared to the grander mysteries of methane hydrates, MacDonald says.

"If it turns out that there is as much carbon in hydrate as we think there is," MacDonald says, "the discovery with respect to the climate and the carbon cycle is one of those paradigm-shifting things." Whether or not tomorrow's industries chug on gas from methane hydrates, "the real mystery of hydrates," he says, "is that this huge pool of carbon, over geologic time, can't stay as it is."

Over the last half century, carbon dioxide, methane and other greenhouse gases have warmed the deep oceans that encase methane hydrates by about three-tenths of a degree, according to the latest figures from the Intergovernmental Panel on Climate Change. If the deep seas warm by 2 degrees Celsius, the depth that hydrates require to remain stable increases from 550 meters to 800 meters, according to the American Association of Petroleum Geologists.

Without a corresponding tidal wave of extra water to hold them in check, the hydrates will transform into silvery bubbles once again, offering up their powerful, heat-trapping methane to the water column and the ever-thickening blanket of gases poaching the planet.

Sonia Shah is a freelance journalist and author of "Crude: The Story of Oil" (Seven Stories Press, September 2004).