In its Thursday ruling against Bono and Howard Stern, the FCC announced that a new day of language policing has dawned. 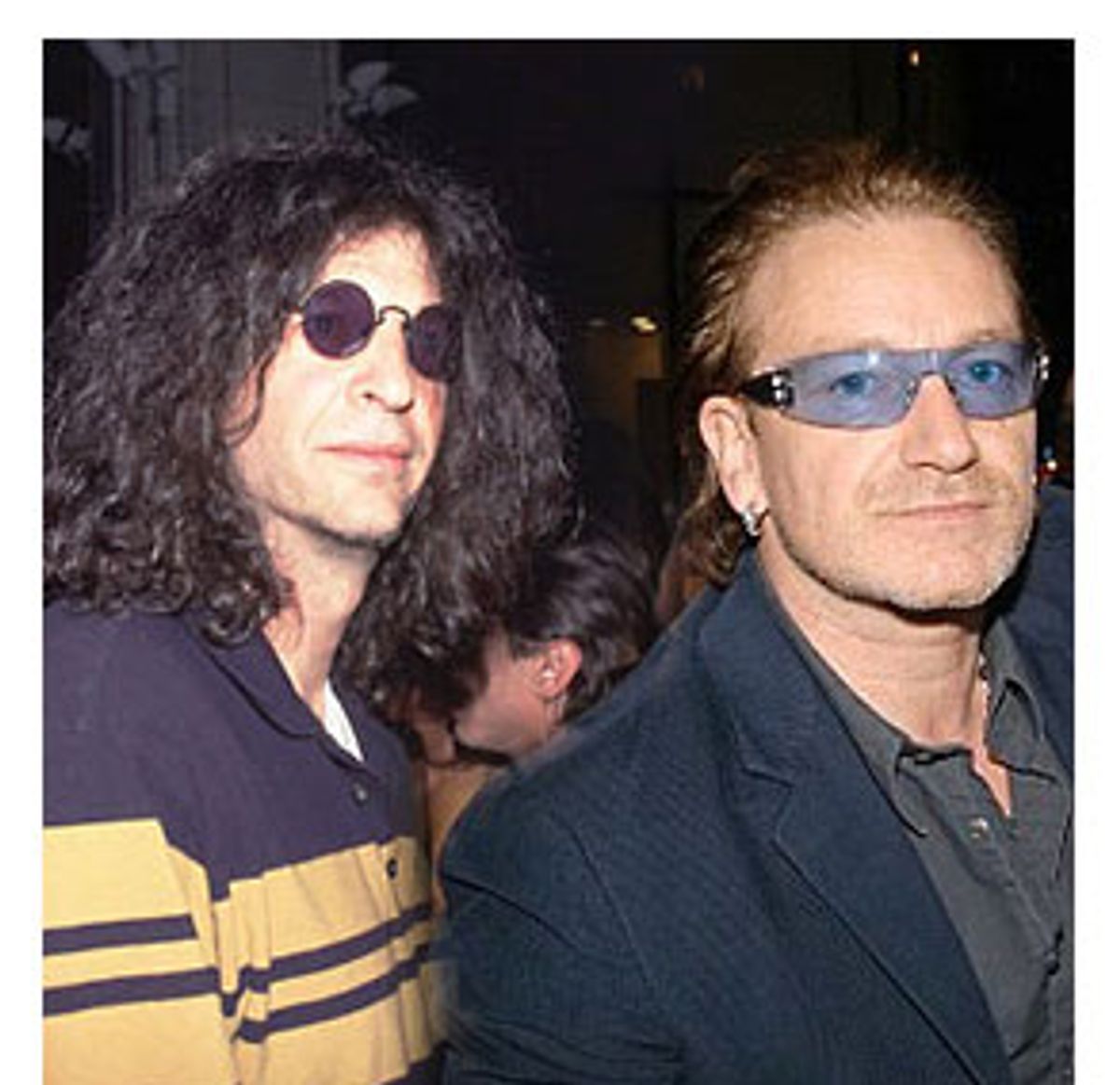 Taking on its new role as the indecency hanging judge, and doing it with a vengeance, the Federal Communications Commission on Thursday levied a fine against Howard Stern, America's most notorious radio talk show host, and ruled that U2 frontman Bono had been indecent and profane for using the word "fucking" in a Golden Globes telecast. The moves were just the latest in what the FCC suggests will be a string of penalties. Under pressure during an election year from politicians and grass-roots groups to clean up the airwaves, the bipartisan commission, which for years was all but dormant on the topic, has launched an unprecedented campaign to battle indecency on the airwaves.

"They're on a roll," says Arthur Belendiuk, a Washington communications attorney who has helped file indecency complaints against radio broadcasters in recent years. "Indecency is clearly the flavor of the month at the FCC. How long it will last nobody knows."

Some of the commission's recent indecency fines have been easy calls, penalizing radio shows that blatantly turned their backs on community standards and broadcast unedited sex talk shows, discussing "licking pussy," and other obvious graphic and sexual remarks. But Thursday's fines are sure to raise eyebrows. For instance, in the Bono ruling the commission, overruling its own internal indecency chief, as well as decades of commission guidelines, unveiled a radical new policy declaring that the mere utterance of the "F-word" on TV or radio is both indecent and obscene. The FCC announced that broadcasters who inadvertently transmit the remark, even if it comes during a live, unscripted event, including, theoretically at least, sporting events, will be subject to heavy fines.

"By our action today, broadcasters are on clear notice that, in the future, they will be subject to potential enforcement action for any broadcast of the 'F-Word' or a variation thereof in situations such as that here," wrote FCC chairman Michael Powell. Suddenly the indecency battle has emerged as the new ground zero in the culture wars.

As for Stern, the commission's decision to fine him for indecency will likely fuel speculation that the famous shock jock is being used by the FCC to make a larger point about indecency. Stern and his supporters can point to three facts in support of that case. First, the content of Stern's show has not changed substantially over the last decade, during which time the commission never fined him. Yet suddenly, amid the controversy sparked by this year's Super Bowl halftime show, he's deemed to be indecent. Second, the fine the FCC levied yesterday was for a broadcast that aired nearly three years ago. If it was indecent in 2001, 2002 and 2003, then why did the FCC wait until 2004 to rule? And third, the raunchy material from Stern's 2001 program that the FCC found to be out of bounds is almost mild compared to the other violations the FCC has been documenting.

Stern became the center of the firestorm last month when Clear Channel Communications, radio's largest owner, kicked him off six of its stations and publicly labeled the syndicated morning show "vulgar, offensive, and insulting." The ban was part of Clear Channel's announced zero tolerance policy toward indecency, and came just one day before the head of Clear Channel radio was to testify before Congress on the issue of indecency.

In the wake of Clear Channel's move, Stern has claimed that the broadcast giant, which has close ties to the Bush family and the Republican Party, kicked him off the air because he had been telling his 8 million weekly listeners to vote President Bush out of office. Clear Channel denies Stern's politics had anything to do with its decision to pull his show.

Since Clear Channel's move, Stern has been on an anti-Bush drive-time crusade, criticizing the president at every turn, and claiming the administration bowed to pressure from the political right and ordered the FCC to go after him. "George W. Bush is going to be out of office in November thanks to me," Stern told his listeners Friday morning, describing Bush and Vice President Dick Cheney as "two drunks who found Jesus." He also contemplated holding a fundraiser for Bush's November opponent, Sen. John Kerry. "I'm sure I'm going to campaign for the guy," he said.

Stern, who was at the center of the last indecency debate during the early '90s, had been warning listeners that the FCC was about to penalize him, and Thursday it finally did. The commission fined Stern's employer, Infinity Broadcasting, $27,500 for a program that aired July 26, 2001. Stern was describing slang words for raunchy sex acts and body parts:

Stern: A "balloon knot" is when you bend over and I can see right up your old wazoo and, uh, you know that's a balloon knot that you see.

Stern sidekick: It was the "David Copperfield." OK, do you want to explain it, since I ... When you're goin' like a dog ... and you're about to finish and instead you don't finish, you spit on her and then you turn around and when she turns her face around then you go ... So it's kind of like an illusion ...

Jock's voice: Wow. What is it that you like about him so much?

Incredibly, the station rebroadcast the exchange for a recorded station promotion.

The same day the Stern fine was announced, the FCC reaffirmed an early ruling against WLLD in Tampa, Fla., for airing a live rap concert. One song contained the following lyrics:

"God damn, where are my pussy eating niggers? Any my niggers into eating pussy? Y'all make some noise. Hey, where are my girls? If you're eating pussy, where you at? That's it. Oh, they all like it. I ain't eating no pussy tonight. If you all don't like it, fuck it. I ain't going to beg you. You like it?"

And also yesterday, the FCC fined Clear Channel's WAVW in Ft. Pierce, Fla., $55,000 for broadcasting an interview, at 7 a.m., with a man and woman before, during and after they had real or simulated sex. According to the ruling, "The DJ said to [the female participant], 'I think you like giving oral as much as you like being on the receiving end, right?' She said yes ... She asked if she could bring some pictures of herself down to the station. The DJ said, 'Yes and when you come down you can give me some oral,' to which she replied yes and the DJ said, 'I'll bet your husband is saying no right now.'"

As the FCC noted, the person who heard the show and filed the complaint said she heard "sounds like 'someone was eating,' which are referenced later in the conversation as the woman having had 'a mouthful' prior to the beginning of the actual or simulated sex act, both comprising clear references to oral sex."

All of those instances seem to be clear examples of broadcast material that's offensive. The FCC's ruling yesterday on Stern's infraction seems less obvious.

As odd as the Stern fine is, the Bono ruling may be even more peculiar. It came in connection with the Jan. 19, 2003, telecast of the Golden Globe awards show on NBC, during which time U2 lead singer Bono, accepting the best original song award, declared the honor to be "really, really fucking brilliant." His comment was telecast unedited.

The Parents Television Council complained to the FCC, asking it to levy fines against NBC and its affiliates for indecency. But last fall, the commission's enforcement bureau ruled Bono's maverick remark was not indecent because "the language used by Bono did not describe, in context, sexual or excretory organs or activities and that the utterance was fleeting and isolated."

For years those have been among the key guidelines the FCC uses in determining indecency fines. To be considered indecent, "the material must describe or depict sexual or excretory organs or activities," according to the commission. And the broadcast "must be patently offensive as measured by contemporary community standards for the broadcast medium."

In other words, to be indecent the content should be sexually explicit, go on at length and be used to titillate. No wonder the FCC's enforcement bureaus last fall dismissed the complaint against Bono for blurting out the F-word once, and using it in a nonsexual way as an adjective. (In its defense filing with the FCC, NBC argued Bono used the F-word as an "intensifier.") Based on FCC precedent, Bono's critics had no case.

But that was pre-Super Bowl nipple rings. (The FCC was flooded with more than 200,000 complaints following the Janet Jackson and Justin Timberlake breast-baring routine.) On Thursday the FCC announced that "given the core meaning of the 'F-word,' any use of that word or a variation, in any context, inherently has a sexual connotation, and therefore falls within the first prong of our indecency definition."

Addressing the question of violating community standards, the commission declared, "The 'F-word' is one of the most vulgar, graphic and explicit descriptions of sexual activity in the English language. Its use invariably invokes a coarse sexual image. The use of the 'F-word' here, on a nationally telecast awards ceremony, was shocking and gratuitous."

Even more amazing, however, was the FCC's decision to cite Bono's fleeting remark not only as indecent, but as obscene and profane as well. Traditionally that has been a far tougher threshold for the FCC to reach, and unlike indecent speech, which enjoys some protection in the courts, obscene or profane material does not. To make their case, commissioners cited a recent profanity ruling by the 7th Circuit, which ruled profanity as any term that's "construable as denoting certain of those personally reviling epithets naturally tending to provoke violent resentment or denoting language so grossly offensive to members of the public who actually hear it as to amount to a nuisance." [Emphasis added]

Over the past several decades, broadcast indecency and obscenity guideposts were created after back-and-forth with the courts, as judges, broadcasters, concerned citizens and FCC commissioners wrestled with striking a balance between indecency and free speech. That balance has been paramount because the FCC is virtually unique among government agencies in that it can fine Americans for what they say, if they say it on the shared airwaves.

In its landmark 1978 case, FCC vs. Pacifica Foundation (better known as George Carlin's "seven dirty words" case), the Supreme Court ruled that while free-speech issues are involved in indecency conflicts, the government can regulate broadcasts because children may be listening. It was the Supreme Court that created the indecency benchmark by ruling as indecent "language or material that, in context, depicts or describes, in terms patently offensive as measured by contemporary community standards for the broadcast medium, sexual or excretory activities or organs."

But still, the question is, does Bono's "fucking brilliant" fall into that definition? It does now. In its Thursday ruling, the FCC essentially waves off its previous guidelines and announces a new indecency day has dawned.

"This sends a signal to the industry that the gratuitous use of such vulgar language on broadcast television will not be tolerated," wrote Powell in his statement released Thursday. He stressed it was needed in order to "protect our children."

It's interesting to note that upon being named the FCC chairman by President Bush in 2001, Powell complained to reporters, "There's a lot of garbage on television. There are a lot of things children shouldn't see." But he stressed, "I don't know that I want the government as my nanny."

What a difference three years make.