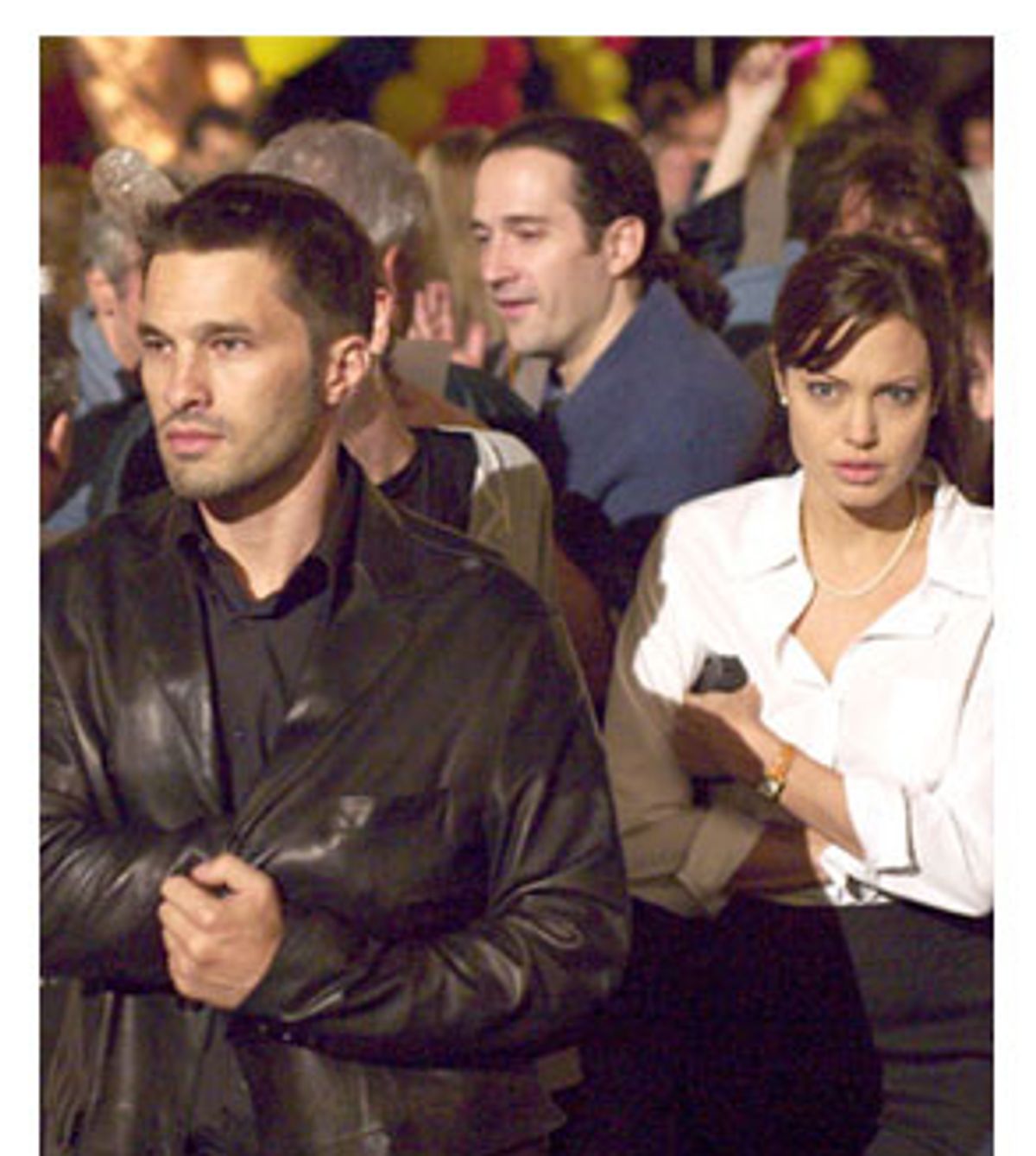 The new thriller "Taking Lives" is set in Montreal and anyone who sees the movie without having visited that city could be forgiven for thinking that electricity has not yet made it to southern Canada. Or, given Amir Mokri's perpetually underlit cinematography, that the region's entire power supply is provided by a quartet of wan crepe chefs working a bicycle generator on the outskirts of town.

The darkness that makes you strain to see who's in a room in any given scene, the shadowy interiors, the sickly blue-green tint to the shots are appropriate, though, as this is a thriller in the "Seven" school of moviemaking. We know that from the credits, shown to us in grime-encrusted police microfilm with jerky camera movements and sudden flashes of white light. We're right into the humorless city-as-hell mode of the contemporary serial-killer thriller, and the only thing that keeps the movie from being unpleasant is that the predictability is comforting. We know what's coming so we don't have to worry about some hidden horror sneaking up on us. The crime scene photos and the autopsy scene close-ups of limbs turned into ragged stumps aren't fun but they're such obvious gross-outs that it feels like more trouble than it's worth to be revolted by them.

Angelina Jolie plays an FBI special agent called in by her friend, a Montreal homicide detective (the always charming Tchéky Karyo, given next to nothing to do), to investigate a series of murders in which the victims (all men) are found with their faces bashed in and their hands cut off. Jolie quickly connects the recent killings to a string of murders going back 20 years. She surmises that the killer is adopting the identities of his victims, living off their credit cards and cash, and moving on to a new identity when it suits him. She also figures out that a local artist (Ethan Hawke, who gets some comedy out of his character's jumpy nerves) who witnessed the latest killing is the murderer's next likely victim.

"Taking Lives," which was adapted by Jon Bokenkamp from a novel by Michael Pye, at least avoids turning the killer into the sort of charming über-genius, which has made serial killers the real heroes of the movies they've been featured in since "The Silence of the Lambs." But the psychological reason Bokenkamp provides for the killer's M.O. is right out of '50s movie Freudianism. ("Taking Lives" is not recommended for parents expecting twins.)

The movie feels like the last gasp of a cycle, which was also the feel of "The Salton Sea," the previous movie directed by D.J. Caruso. That picture was a late entry into the Imitate Tarantino and Win a Studio Contract sweepstakes. As a filmmaker, Caruso seems to be an idiot savant with bad timing -- he knows how to imitate styles, but figures it out after the vogue for the style he's imitating has passed.

Caruso does include one genuinely clever touch in this film, a slow panning shot of a room that ends on a detail that, if you can hook it up in your head with a bit of information provided at the beginning of the movie, reveals the identity of the killer. Too bad he ruins the effect by having the killer explain the clue 10 minutes later. And too bad nobody thought to explain the things that don't add up -- like why Gena Rowlands, as the mother of the prime suspect, tells the cops her son is evil when nothing in the experience she has of him confirms that.

The cast includes Keifer Sutherland as a red herring, and Jean-Hugues Anglade (fine) and Olivier Martinez (a reason to hate the French if ever there was one) as the cops helping Jolie. "Taking Lives" makes you wish that someone was making better choices on her behalf. Jolie is far too good for this tripe but she does give the film its only believable moments, and for the first half, her concentration makes you watch her intently.

Jolie's role is made up of conceits she doesn't need. She tapes crime-scene photos to the canopy over her bed, and around her hotel room so she can study them while she eats dinner. (Reportedly Jolie lined her house with photos like this while preparing for her role in "The Bone Collector.") But Jolie gives a quiet, self-contained performance that conveys her character's immersion in her work better than any of those other gimmicks. For someone with such big, bright eyes, she has a way of making them seem narrow and pinpointed to one tiny detail, as if she's tuned into a faraway radio station and can hear the signal loud and clear while everyone else is trying to sift through the static.

Jolie is so good at conveying a mind putting things together that Caruso's decision to keep cutting away from her to focus in jarring close-up on the details she takes in while she talks to a person seems like a lack of faith in his actress. I was glad that the movie didn't stoop to the device of revealing some hidden trauma in Jolie's past that set her on the path of catching serial killers, but the movie could do with some insight into what makes her tick.

Jolie gives the sort of interior performance that's the hallmark of a very talented actor. But interior performances need a director in tune with an actor to suggest what's being kept inside. Directing actors seems the last thing Caruso is interested in. He's much more interested in making "Taking Lives" look like somebody in the production office at Warner Bros. forgot to pay the light bill.