A day of grim vindication

In New York, San Francisco and around the world, tens of thousands of marchers protested the Iraq War and the Bush administration assault on democracy. 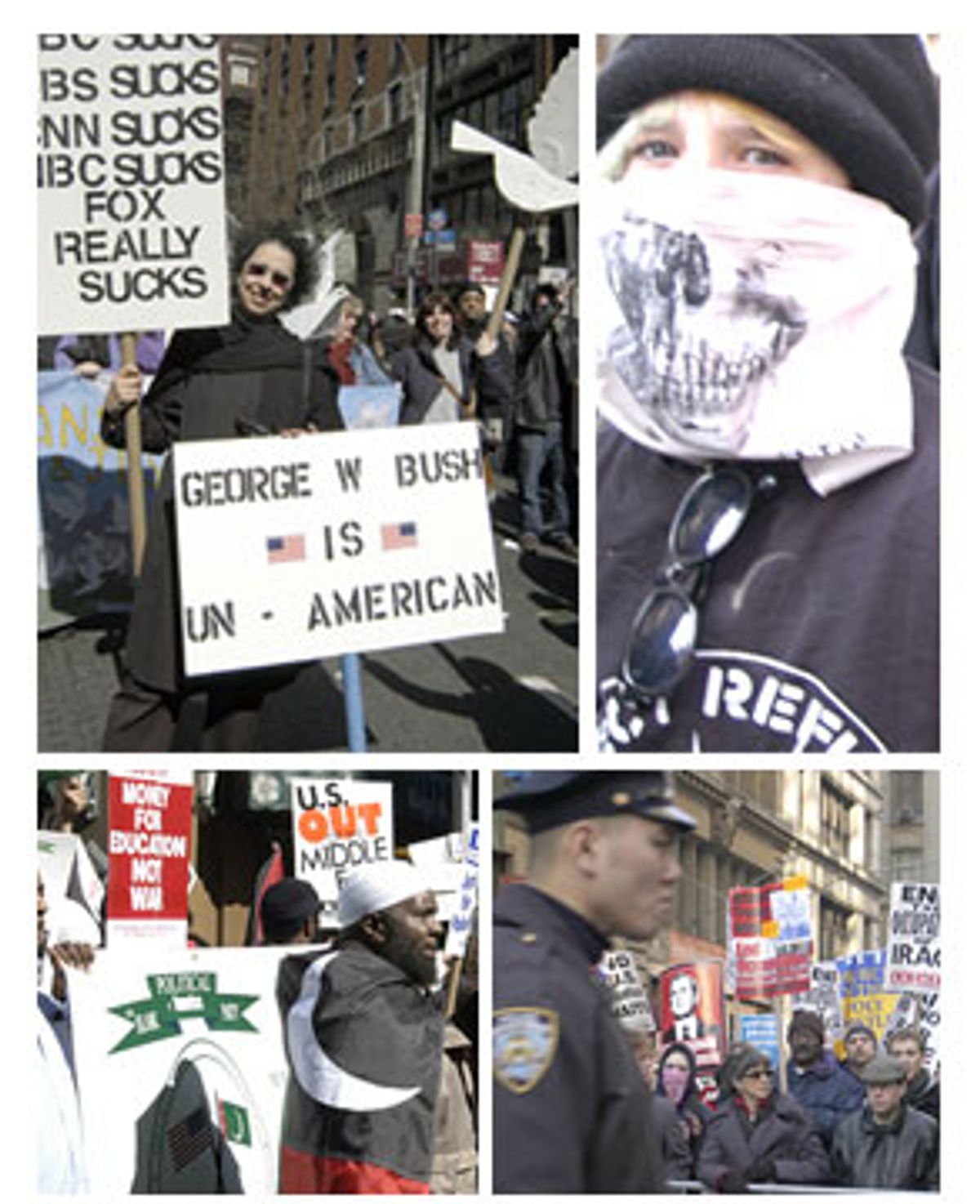 On Saturday, as people across America and in dozens of countries worldwide marked the one-year anniversary of the invasion of Iraq, a man in khaki pants walked down Broadway with a sign simply saying, "We Were Right." For the antiwar movement, the last few months have been a grim vindication, as security in Iraq deteriorates and the Bush administration's pre-war rationales evaporate.

On Feb. 15 last year, millions of people across the globe took to the streets in the largest simultaneous protests the world has ever seen, hoping they could somehow stop the march to war by their epochal display of opposition. Now, with the war over and the occupation turning into a bloody quagmire, protesters in countries allied with America demanded that their governments follow Spain's example and quit the coalition of the willing, while marchers in the United States rebuked their government for the war and a thousand other misdeeds.

At antiwar protests last year, many people carried pictures of Picasso's masterpiece, "Guernica," the 1937 mural inspired by a Spanish Civil War massacre. It was a reference to the way that the United Nations' tapestry reproduction of the painting was covered during a press conference last year by Colin Powell, who was then making his case for invasion. This year, in the wake of the bombings in Spain, images from "Guernica" showed up at protests once again, this time bearing the bitter slogan, "Mission Accomplished."

Spain hosted some of the largest of the day's antiwar rallies, with the BBC reporting that 100,000 marched in Madrid and the AP estimating that 150,000 demonstrated in Barcelona. Even larger protests were held in Italy, a country that, like Spain, went to war against the will of the vast majority of its people. According to the BBC, 300,000 marched in Rome. Twenty-five thousand marched in London and 30,000 in Tokyo. There were protests in Thailand, Greece, Pakistan and Egypt. In Iraq on Friday, thousands of Shiites and Sunnis joined together to demonstrate against the occupation, a mordant tribute to the liberation touted by the Bush administration.

The failure of the occupation of Iraq means, ironically, that there isn't much difference between the demands of many American antiwar protesters and the desperate plans of the Bush administration. Signs at Saturday's rallies said, "End the Occupation," and many protesters called for the United Nations to take over control of Iraq. By all indications, that's exactly what the Bush administration wants, in order to free itself from responsibility for Iraq's misery by Election Day. Throughout Iraq, American troops have withdrawn to their bases, hoping to let hastily trained Iraqi forces take control. The legal occupation is scheduled to end on June 30, despite the fact that nothing has been erected to replace it and the U.S. is virtually begging the U.N. to oversee the transition. End the occupation? The White House can't wait.

That wasn't lost on some demonstrators. "I feel like we're in a quagmire, but I don't feel we can abandon these people right now," said Debbie Riga, a 45-year-old hotel manager marching down Madison Avenue in Manhattan. "The U.N. needs to get in there and clean up our mess. It's divine justice in a way -- we insulted them and now we're begging them. The Bush administration is trying because they know they're stuck. They've got to get out of there before the election."

Organizers expected that Saturday's protests would be smaller than last years' demonstrations, partly because there's so little hope of positive change. Asked how many people were expected, Bill Dobbs, spokesman for United for Peace and Justice, one of the protest's organizers, said, "not anything like the huge numbers when we all believed we could stop the war." Later, Dobbs claimed that 100,000 people marched in New York and 50,000 in San Francisco. Officials in New York put the number at 30,000, and police in San Francisco told the San Francisco Chronicle that the there were "substantially less" people than organizers claimed.

In Manhattan, some carried the same signs and wore the same costumes as last year. There were the antiwar cheerleaders ("We fight bombs with pom poms!), and the missile dick chicks, a troupe of chorus girls in red, white and blue, sporting massive silver strap-on dildos. A group of young, out-of-town Bush supporters marched provocatively through the crowd and lectured passerby about the necessity of moral clarity in the war on terrorism, and though they got into arguments, there was a secondhand quality to it all, with both sides wearily reciting the same talking points they'd been repeating for months.

"This is like a pep rally at the high school gym," said Ben Shepard, a 35-year-old social worker and member of the Paul Revere bloc. "It's one-tenth of the burlesque and fun" that we can expect during the Republican Convention, he said. There, there will be "lots, lots more of this flamboyant fun, good times and high-jinks. We've got to change the narrative. A lot of us are out here saying there's another way of having a democratic participatory process."

Others spoke similarly. They were protesting the war, but also something bigger -- the erosion of democracy in America and the administration's naked contempt for their values.

"Over the course of a year, it's all built up," said Riga, a curly-haired brunette dressed elegantly in all black and holding a sign saying, "ABC Sucks. CBS Sucks. CNN Sucks. NBC Sucks. Fox Really Sucks."

"The PATRIOT Act, the Project for a New American Century, it's not one thing anymore," Riga said. "There are many, many issues. It's not just Iraq, although that's a big part of it. It's about our civil rights. It's about what happened in Spain."

And for many on the left, it's about all the nations of the world where the United States has recently intervened. In San Francisco, the protest was billed as an event to "end colonial occupation from Iraq to Palestine, Haiti and everywhere!" The afternoon was unseasonably warm, and people came out for all kinds of reasons. "If you look at the posters people are carrying, they're bringing a variety of causes," said Paulette Ballas, 34. Another protester, Peter Alston, was more direct: "It's a beautiful day, seemed like a good thing to do," he said.

While the San Francisco protest was largely peaceful, a few hundred protesters skirmished with police. About 80 marchers were arrested.

Palestinian flags flew throughout the crowd in New York, and several people held placards featuring photographs of embattled Venezuelan president Hugo Chavez and the words "Dignity, Sovereignty and True Freedom." At one point a speaker shouted, "Drinking Coca-Cola is like drinking the blood of Colombian workers!" A table sold sweatshop-free T-shirts that said, "Globalize the Intifadah."

Near Madison Square, someone dumped a stack of posters lauding Abdul Qadeer Khan, the father of Pakistan's nuclear bomb and confessed nuclear proliferator. One sign called him the "Hero of the Muslim World," another declared him the "Future President of Pakistan." A Pakistani physician passing by stopped to photograph the posters, and said, "If I had to shoot Musharraf, I'd shoot him now. That's how much I hate him for accusing Abdul Qadeer Khan. This man is very dear to my heart. He has a right to protect the Muslim world."

Then the man, a 40-year-old named Ali who didn't want his last name to be used, began a soliloquy about the indignities he's faced since Sept. 11. He took out his hospital ID and explained how, during the past few years, he constantly has to show it to guards on his way to work at the emergency room at Metropolitan Hospital Center. It's humiliating, he said, being treated like a criminal in the place where's he made his home for 13 years, the place where he works to save lives. "Is this a country? This is a jail," he said. "What is this, because of my skin? Because I have a moustache?"

Ali was protesting the war, but more than that, he was protesting the way a country that once embraced him is now pushing him away. "There is so much good in this country," he said, but if his relatives in Pakistan wanted to follow him here, he'd warn them to be careful. "If I had to send a message to my nephews, I would say come with caution, and think of returning back."

Laura McClure in San Francisco contributed to this report.