Is this the "new golden age of global capitalism"? The Economist thinks so -- and ignores the facts. 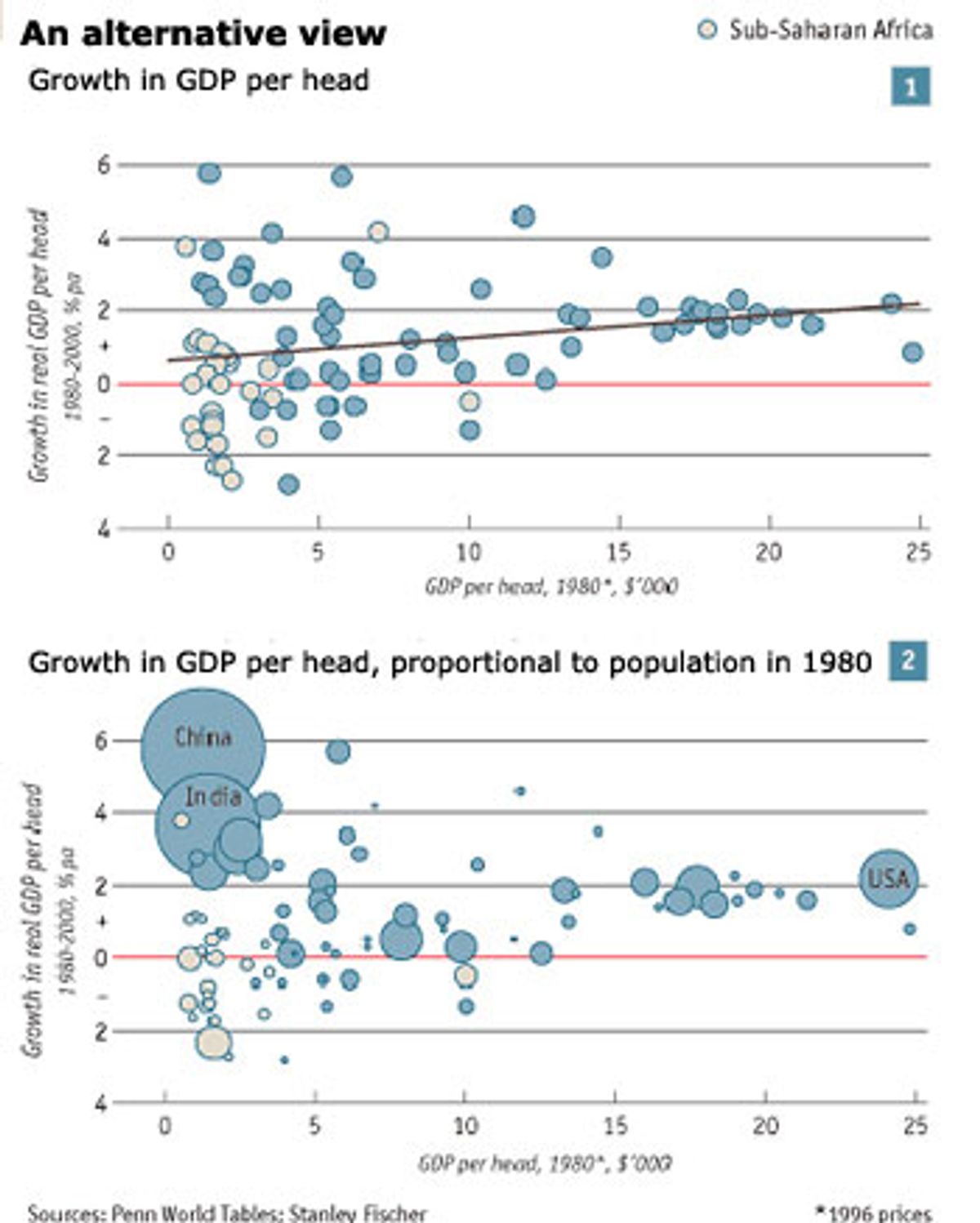 Does inequality rise under globalization? You might think this is like asking "Does McDonald's have golden arches?" And you would not be wrong. But there is a part of the scribbling world -- and some economists of whom they scribble -- for which the obvious is never quite good enough. Especially not when powerful doctrines are at stake. And so we find, in wide circulation, the curious (even weird) claim that worldwide economic inequality has been falling thanks to a "new golden age of global capitalism."

Last August, the Economist put about this claim. I debunked it before the audience of the British Web site OpenDemocracy.net. Clive Crook of the Economist then responded to me, and I rebutted him. All of this is on record, here, here and here. But some people don't learn, and here we are again.

This month, they've gone and made the claim again. And they've included, as evidence, the same pair of charts they already published last August. The charts come from a lecture given back in January 2003 by Stanley Fischer, a formidable economist and former deputy managing director of the International Monetary Fund. Fischer is a globalization advocate. But he is smart and careful and his lecture is studded with footnotes and qualifications. These the Economist cheerfully ignores.

Let's have a little fun: How many ways can a picture lie?

The top chart shows economic growth for a large group of countries from 1980 to 2000 plotted against original income level. There is a point for each country. The scatter slopes upward, indicating more growth in the rich countries, and hence increasing inequality between countries, over the past 20 years. Poorer countries have been slipping, in general, during the age of globalization. Nobody disputes this.

The bottom chart weights each point by population. It reveals that two of the largest countries, China and India, grew among the fastest. Hence the claim: That if one considers people rather than countries, worldwide inequality has been falling under globalization. The chart qualifies this conclusion by noting that in sub-Saharan Africa the situation is terribly grim, with low and declining incomes in the past 20 years. No one disputes that either. But sub-Saharan Africa, the Economist tells us, is an under-globalized region, so it would not be fair to count it in the grand scorecard of the neo-liberal world.

What is wrong with the picture?

First, it ignores changes within countries. Yes, China's average income grew. But not every Chinese got the average increase. We know that China became dramatically more unequal in the 1990s. (Fischer concedes this, incidentally; see my evidence here.) And it is possible to make a much broader statement. Looking over the broad range of developing countries, my University of Texas Inequality Project finds rising inequality in most of them, including India, and falling inequality in only a few.

Second, it is not reasonable to treat sub-Saharan Africa as apart from globalization. These countries have always been suppliers of minerals, rubber, oil, coffee and cocoa to the West, often under horrific conditions. (During the slave era they were, of course, great victims of that earlier wave of globalization.) They are not isolated now: Trade ratios in sub-Saharan Africa are not abnormally low. They are victims now of debt crises and so-called structural adjustment programs. To treat them as special cases is simply a way of evading globalization's greatest failures.

Third, the two charts cover only the period 1980-2000. But the right comparison is between this period and what came before. For most developing countries, growth was higher in the 1950s and 1960s, under the regulated international monetary system known as Bretton Woods. It was also much higher in the 1970s, when the oil boom, high commodity prices and cheap credit briefly spelled good times for much of the developing world.

Fourth, countries created after 1980 are excluded from those charts, including the successor states to the Soviet Union and Yugoslavia. And what happened to income in these areas as they globalized? Inequality shot up, poverty exploded and life expectancies fell to Third World standards. No one disputes these facts, but the Economist ignores them.

In the new version of its article, the Economist does say of China and India that "Neither country is an exemplar of free market capitalism -- far from it." Funny, I used almost exactly the same words in my first critique of their earlier article, saying: "Anyway, neither China nor India is an exemplar of free-market globalisation." This little bit of crypto-plagiarism tells you all you need to know about the standards the Economist applies, where this issue is concerned.

Both China and India steered free of Western banks in the 1970s, and spared themselves the debt crisis. Both continue to maintain capital controls to this day, so that hot money cannot flow freely in and out. Both continue to have large state sectors in heavy industry to this day. And China, for that matter, continues to be run by the Communist Party, which is not the institution most noted in history for devotion to the free market. (More analysis on China can be found here.)

(Confession: In the mid-1990s I served as chief technical advisor to a Chinese State Planning Commission project on macroeconomic reform, a job that centered on advising them as to which Western economists to talk to, and which ones to avoid. I loved the second part of that job.)

Of course, whether true or false, the claim that worldwide inequality across people has been falling is just an academic abstraction. Why should anyone care? What matters is whether particular policies lead to good or bad results, and policies tend to differ across countries. Yes, China and India have done well, on the whole. But is this due to their reforms or to the regulations they continue to impose? No doubt, the right answer is: Partly to both. The Economist and its allies simply refuse to face this complex and uncomfortable reality.

The Economist makes much of claims that global poverty has been falling in the past 20 years. This claim is probably true. If you measure global poverty as the World Bank does, by a living standard of less than a dollar a day, the numbers probably are falling. But where are all those people -- hundreds of millions of them -- who may have risen out of the very bottom? Once again, they are overwhelmingly in China and India. This point is made explicitly by Surjit Bhalla, one of the pro-globalization economists the Economist cites -- but it doesn't cite him on this point. They are not in Africa, where the world's worst poverty persists. And they are also not in Latin America or the former USSR, where the poor live at a higher standard but where poverty rates are getting worse.

So once again, we have to ask: Is this the golden age of global capitalism, really? Or is it something closer to a golden age of reformed socialism in two places (China and India) -- alongside an age of disasters for those who followed the prescriptions favored by the Economist? In truth, countries that followed the IMF-World Bank prescriptions to the letter -- Argentina, say, or Russia in the early 1990s -- have seen catastrophe worse in every way than the Great Depression of the 1930s was for us. Is it any wonder that the electorates in both places firmly reject the neo-liberal model?

Finally, it is not true that the remedy to the problems of globalization is "more globalization." We often hear, for instance, that cutting trade barriers to farm goods from the Third World is the big solution to many development problems. Don't believe it. Yes, some tropical products (sugar, orange juice) face severe protection. But most do not. And even if all the agricultural barriers came down, few developing countries could get ahead much just by expanding their farms. There are ecological limits. There are limits to the quality of the soil. Most of all, there are severe problems of oversupply. There is too much coffee in the world as it is: New supplies only drive the price down. Sugar would work the same way, and so probably would wheat and beef.

Confronting the problems of the stricken Third World will require a balanced approach. What the poorest countries need perhaps most of all is sustainable finance, permitting them to build their infrastructure, their human resources, their public health systems and their industries -- both for domestic consumption and foreign trade. This is an old formula. But it is one with a track record: It worked in Europe after World War II, and then in Japan, Korea and in China, each of which saw decade after decade of sustained growth and industrial transformation.

Here's the rub: Pursuing these goals will require placing the world's private financiers under a degree of regulation and control -- such as we used to have in the real golden age of development, from 1945 to 1970. That, of course, is not on the Economist's agenda. But it should be on ours.