Friends are baby booming. Nursing moms are suddenly everywhere. Why is the most natural thing in the world so bizarre? 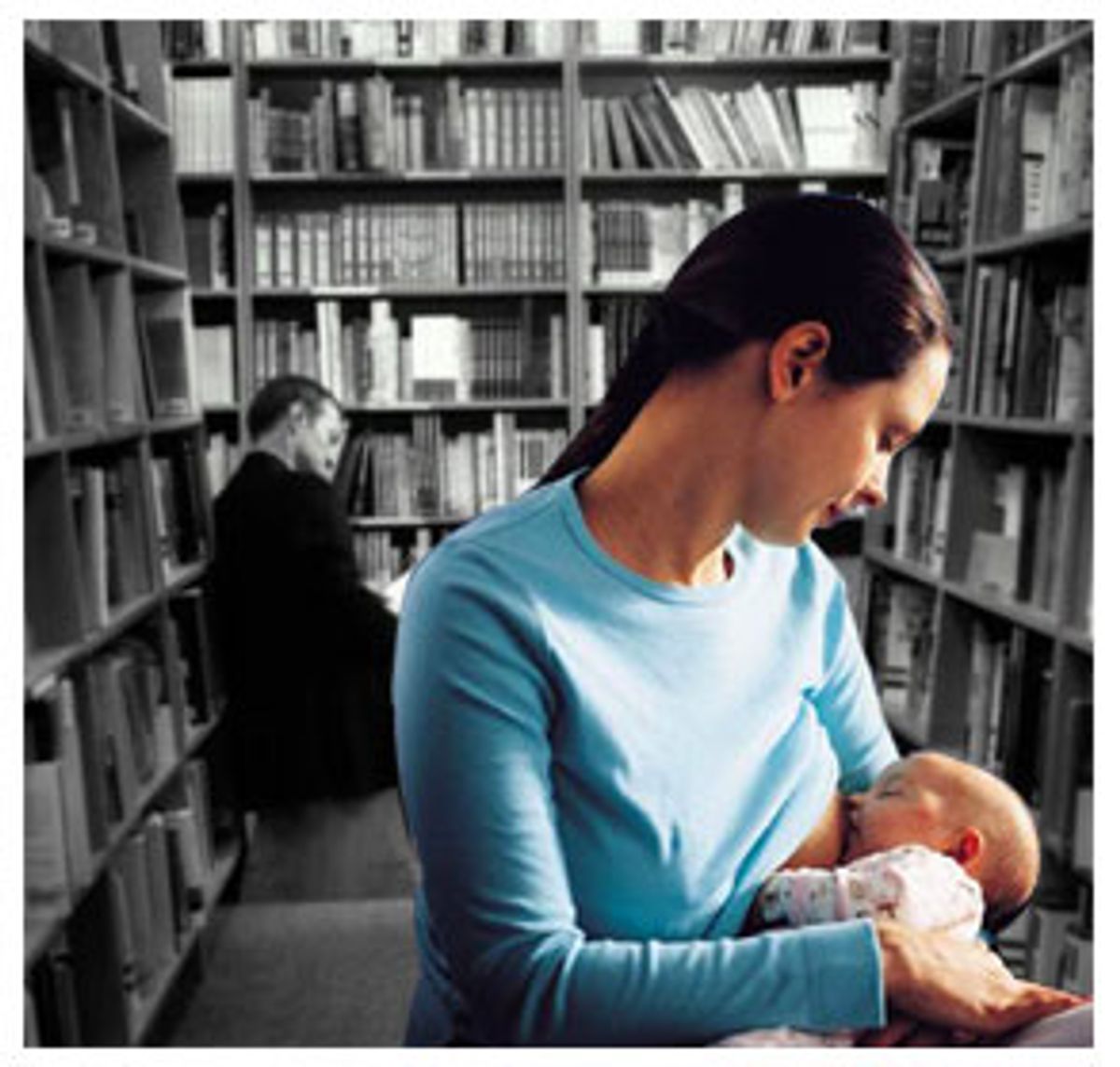 "Do you mind if I expose my breast?"

I had seen a few women in various states of undress among the library stacks in college, but never expected this question in the children's section of a Barnes & Noble in the Upper West Side of New York City. I've known Amy, a 40-year-old children's television producer, all my life: she's as close to a surrogate sister as it gets. Still -- or, perhaps, because of this -- it was a little strange for both of us when she undid her blouse. For starters, it was Amy's first foray into public nursing: her daughter Emily was just a few weeks old. The fact that my fiancée was there too only added to the oddness. (Young Emily, however, was unfazed.) I pretended to flip through Lemony Snicket's latest dark tale, but Amy's the type to see an elephant in a room and invite it over for dinner and drinks. "You know, this is really weird," she said, "but I have to say, you're being amazingly cool."

I mumbled something about having two sisters and probably made a moronic comment about seeing tons of boobs in my day. Yet I was totally flustered by the whole thing. Not that I care who nurses her baby where and at what time -- nor, obviously do any of the nursees care for my opinion on the matter. But it suddenly seems like breast-feeding is as ubiquitous as the Gap. More and more, my e-mail in box is filled with we're-new-parents-look-at-our-perfect-baby pics, which always seem to include a two-minutes-old-and-sucking-on-tit shot. And every coffee spot in the New York's East Village seems to be turning into Cafe Pert.

How am I supposed to navigate this breast new world? Should I excuse myself when nature calls my friend's baby to her boob? Or is that rude? Do I stay? And if so, where do I look? Is there anything I can do to help? Am I a sicko just for thinking I can help? And how exactly did that woman at my local cafe learn to undo her bra, prop the baby up, attach him and open the New Yorker in such a way that it perfectly shields her in one seamless swoop -- while still finding time to chuckle at a cartoon? That the body works the way it does -- what a young dad I know calls "God's nutrient-solution taps" -- is amazing enough. That New Yorker trick is a small wonder.

"I think any discomfort involving the sight of the beautiful female breast, doing what it was biologically designed to do, is absurd," says my friend Neal, a 34-year-old writer and musician in Austin and father of Elijah. Right. Then you accidentally see your sister's nipple.

As with most things in life, women are at ease doing what nature intended them to do -- be it breast-feeding, talking about their feelings, or finding a deal on shoes -- while most men squirm like a jellyfish at the Jersey shore. New moms tell me it's typically brothers and dads who have the most trouble making sense of feeding time. After all, we live in a culture in which most fathers haven't seen their daughters naked since they were 4 years old, for fear of getting arrested. Now their little girl has a nipple the size of a Boxster and is whipping it out in the bleachers.

"Having my father see me nurse was a bit strange," says Web marketing manager Candace, 35, who grew up in North Carolina and now lives in Oakland, Calif. "He was uncomfortable, though more due to his hang-ups over exposed flesh than anything else. But he's adapting. He tried not to look directly at what was going on and would hover at the bedroom door when I was nursing. He just couldn't stand to stay away from the baby for long."

"With the first kid my father seemed almost enchanted," says Christine, 37, who works in the film industry and lives in Los Angeles with her husband and two small boys. "As my husband has noted with some sarcasm, 'It's so nice to sit around the living room all together while your father sits 12 inches away from you as you nurse the baby.' As my second baby has gotten older (10 months now), Dad has taken to seeing what's on the Golf Channel, instead."

Even for some of my new dad pals, it's tricky territory. "When you have a kid, you go into this alternate universe where there are breasts everywhere," says 33-year-old magazine editor Scott, whose wife recently had their second baby. "You suddenly have all these new friends who have kids, the kind that need to suck on boobies from time to time. All the ladies get very casual about whipping out the titties for some reason -- this is the 'Twilight Zone' moment -- and you have to pretend to be completely cool about it."

"You don't make a show of averting your eyes because breast-feeding is cool, which means you are cool with it," he explains. "This means you are a grown-up, and grown-ups apparently don't get excited by that athletic and pert wife of your casual acquaintance from the playground whose tits didn't use to be that big but are now gorgeous things of beauty."

We try to be cool, we want to be cool, we are theoretically cool -- but we rarely are. Rebecca, mother of Milo, tells the story of her ex-boyfriend popping in on her unexpectedly in the middle of nursing. She told him that she had to finish feeding Milo, and got back to business. The ex looked alarmed and said, "Oh! You meant breast-feeding him. Should I leave?" Naw, she said; if you're cool with it, you don't have to leave. "I'm cool with it," he said. He spent the whole time looking out the window.

Amy, who since her debut at B&N has nursed in bars, stores and the DMV ("I wasn't about to give up my place in line"), says that the only times things get weird are when she's nursing in front of any man she's slept with. "The transition from lover to milk source is a little odd," she says.

"Here's the big secret about nursing in front of men other than my husband," says Christine. "It's not the breast that's the issue -- it's the soft, mushy white stuff where my waist used to be. In most outfits -- say, your favorite white T-shirt -- it's impossible to put the kid on the boob and not reveal some of this. I've found a jean jacket is a great help."

"It's taken a while, but I am completely over the public display of breasts," she continues, noting that she has now nursed in public parks, airports, parking lots, fancy restaurants, sidewalk cafes, malls, coffee shops and, most recently, a phone booth. "L.A. is no Bay Area, but it's a big city. It's just not a big deal."

For many urban women, it's not a big deal. Some women who did take issue with all this exposure had more personal reasons. One friend told me that since there was a time in her life when she didn't think she would be able to give birth, she didn't want to flaunt her fertility in front of other women who might have trouble conceiving. Another almost apologetically explained that she was shy with her body, even though most of her friends and neighbors aren't.

"Rates of breastfeeding are much higher in cities and on the coasts, so I think there's naturally a greater acceptance and understanding of it in public," says Johanna Myers McChesney, co-founder of Isis Maternity, a Boston center that offers prenatal and postpartum classes and support. Still, she adds, no matter where the breast is found, "there's no question, guys will sneak a peek -- they'll even try to bust each other doing it. Even the most polite, well-mannered of them will use the opportunity to its fullest advantage under the guise of 'just looking at that adorable baby' or 'continuing my conversation with the mom.'"

There was nothing remotely inappropriate or sexual when my yoga teacher (let's just stop for a minute to contemplate this: yoga teacher!) nonchalantly started to feed her boy as we chatted one day after class. She was cool. I was cool. And I wanted to dance the jig all the way home.

Breast-feeding, like reality TV, is here to stay. Men are slow learners -- though, naturally, the older they get, the more they're comfortable with it. Too comfortable, in some cases. "My husband is older than me and he lived in Berkeley for a while," says Rebecca. "And every single one of his guy friends asks me how the feeding goes. 'Is he latching on OK?' 'Are your nipples cracked?' 'Are they sore?' I'm like, Do I have to get into this with you?"

Even among my upwardly mobile, outwardly bohemian batch of friends, the notion of having their buddies chat up their wives during feeding time takes some getting used to. "I don't know if 'weird' is the right word, but there was definitely a Madonna/whore thing going on in the beginning," says my friend Anthony, a 37-year-old food and wine writer and father of Sofia. "Of course, I was supposed to be thinking: 'Isn't it beautiful how serene my wife and daughter look in front of my best buds, like we're the Holy Family nativity scene?' But then when my buddies would blush, I knew they were probably trying to suppress lascivious thoughts about my wife and her beautifully swelled bosom. In the end, I thought: Hey, they're my thoughts, too."

My friend Kenneth, a 34-year-old lawyer in San Diego whose wife recently started breast-feeding their daughter Delanie, doesn't have that problem. "When you see a woman with bountiful breasts and milk pouring out," he says, "that means one thing: Mom. And when you are staring down a mom, you think of your mom. Nobody is secretly psyched to do anything with their own mom."

Well, not their own moms, sure ... but other moms are a different story.

"I had the hot-mom fantasy thing going for a while," says a friend who prefers to remain nameless for reasons that will become clear in the next sentence. "When my wife got prego, my fantasy turned to lactating breasts. I waited nine months, then finally convinced her to let me try it. I started sucking and at first didn't get anything. I put all I had into it and -- bam! -- milk started streaming like a small hole in a hose right to the back of my throat. It startled me -- the taste was super dry and didn't taste quite like the milk I was expecting. There goes that fantasy."