For the past 25 years, I've woken up to the voice of one man: Bob Edwards, the host of NPRs "Morning Edition." Now that he's been ousted, who will guide me through those early-morning hours? 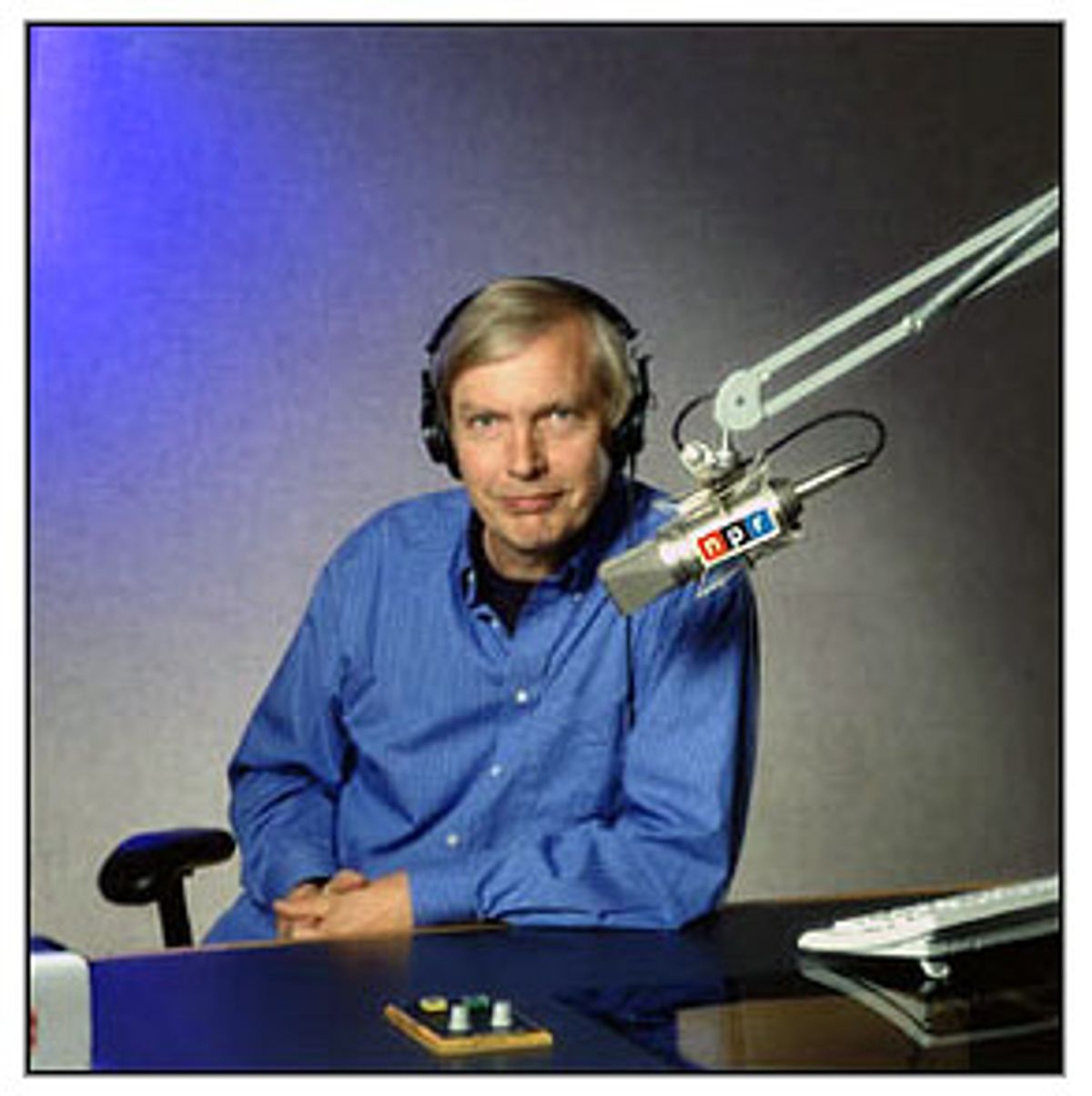 I suppose it was bound to happen: 'Tis the season to drop-kick venerable news legends, after all. But where one might understand retiring august talking heads like Dan Rather, Tom Brokaw and Peter Jennings -- television does have a thing about youth -- what's NPR's rationale for canning Bob Edwards? Bob -- or, as he announced in every bedroom, kitchen, car and living room I've inhabited for the past 25 years, "BAUULLLB" -- Edwards has been the chief cook and bottle washer of NPR's most popular show, "Morning Edition," since its inception. At 56, the Louisville, Ky., native has hardly lost a step, dispensing news in the soothing singsong that has become his network's sonic trademark.

As Edwards told the Washington Post on Wednesday, "Morning Edition's" already massive audience doubled in the past 10 years -- under Edwards' watch -- making it the No. 1 show of its coveted morning time slot, with more than 13 million listeners. And this hasn't been just any 10 years, but 10 years that saw the rise of Rush Limbaugh and Michael Savage -- radio forces that supposedly chimed the death knell for left-leaning civility. Headline-grabbing drive-time competition like Don Imus and Howard Stern has been eating Edwards' dust since they went on the air. When it comes to the wee small hours, Edwards is king.

So what could NPR possibly be thinking? The press release tells us nothing, except that Edwards has announced his departure from the show to report from the field. The field! Where he might step on a land mine and leave us for good? Or by "the field" does NPR actually mean the pasture -- where, like so many Daniel Schorrs, he'll pontificate risk free until he shuffles off the broadcast coil to write his memoirs and toss a ball around with the grandkids? Either way, it makes no sense to depose the franchise.

Thankfully, Edwards himself has been a bit more forthcoming about the reason for his departure. In a line from the Washington Post interview that's bound to get massive pickup from the Volvo-owning wing of the blogosphere, he took no prisoners: "I think [Jay Kernis, NPR's senior vice president of programming] is tired of listening to me," he said, no doubt in the same honeyed croon with which he's ably announced everything from terrorist alerts to the latest CD release of the klezmer outfit du jour.

Who else would Kernis rather hear? The odious Scott Simon of "Saturday Weekend Edition"? Simon's schmaltzy repartee with children's book author Daniel Pinkwater is nothing but a poor-man's Edwards-and-Red-Barber routine anyway. (Don't get me started on the patronizing sap he dishes up for the "doyenne of dirt," gardening guru Ketzel Levine.)

Is this an effort to head Al Franken's upstart Air America Radio off at the winking pass? Is NPR looking for flash? Well, their designated interim replacements, Steve Inskeep (a breathy, rambly foreign correspondent) and Renee Montagne (an able sort, but little more than Linda Wertheimer-lite) are not exactly going to sex up the airwaves. I'm listening to Inskeep this very minute on "All Things Considered" as he whispers from Kurdish Sulaimania about its new public library, "decorated with Roman columns and an entire wall of glass." His wide-eyed, Midwestern-ye-ye delivery has a mighty familiar ring: He's Justin Timberlake to Edwards' Michael Jackson. They might as well just turn the whole network over to Sunday "Weekend Edition" puzzlemaster Will Shortz.

Maybe I'm being a little hard on Inskeep and the rest, but dumping Edwards is personal. And to me, anyone who takes his place is an interloper, a stepdad.

I've woken up with Edwards every morning since I was 9. His dialogues with legendary baseball announcer Red Barber were such a far cry from sports journalism's anabolic norm that those "Fridays With Red" segments sparked the flame of my now ardent love of baseball. Edwards' calm reportage of even the most horrific worldly events warmly seduced me into becoming the news junkie I so proudly am today. After my parents split up in 1978, it was Edwards' laconic baritone reverberating off the bathroom tiles, not my absent father's, that kept early-morning power struggles over the hair dryer from turning our West Los Angeles three-bedroom into a better-landscaped version of the Gaza Strip. After 9/11, it was on Edwards' sturdy shoulder that I leaned, burying my head among the imaginary stray dog hairs and imaginary shortbread crumbs on his imaginary rumpled cardigan for succor.

With a heavy heart, after hearing about Edwards' getting the boot, I called my mother to give her the news. It was 5:24 p.m., and she was ambling through the aisles of a Sephora somewhere in the Southland. "Why?" she wailed, a rain of muffled static making me wonder if she dropped her cellphone in shock. "If he's being forced out, I'm going to be really upset. Whenever he's on vacation I wonder, When is Bob Edwards coming back? Where's Bob Edwards?"

My college roommate, Sarah, a public defender in Minneapolis (a city that has Edwards pulsing through its very veins), expressed the same sentiment. "You're kidding!" she howled. "He's the voice of the morning! Every morning!"

Reliability is what we need in our mornings, not angry, drunken dwarves or lesbian strippers (not that there's anything wrong with that!). "Is NPR looking for the hip new voice?" Sarah continued. "I don't want that. I want to feel like every day will be like all the others, and I'll be done at the end having made it through. I don't want someone to make my heart pound. I want routine!" I hung up the phone fairly certain she wouldn't take it out on her two small children, but no happier to have borne such disturbing news. If only I could have laid it on her like an Edwards broadcast, maybe none of us would be taking it so hard.

So, NPR, it's with this hole in my soul that I have to state the obvious: you're National Public Radio, one of the rare news outlets where Botox need not apply. Let Cokie Roberts lacquer her Foggy Bottom bouffant into submission for her appearances on ABC News. When she briefs Bob Edwards on the battles of the Beltway, she might as well be in a bathrobe and some hot rollers, like every other woman in America at that hour. Such is NPR. You're not trendy, racy, sexy or even young. You're everything but -- and that's what makes you such a blessed tonic for the 13 million of us weary of a world in which what passes for information comes from such experts as Nancy O'Dell and Billy Bush. When the mike is passed to Inskeep and Montagne in May, maybe I'll still be listening. But without Edwards' familiar voice, I just know every day will feel like Pledge Week. I can't help it: the guy's like family.

Alexandra Marshall is a contributing editor at Glamour and an editor at large at Radar. She has written for the New York Times Magazine, Harper's Bazaar and Time Out New York.