How President Bush sent a message with his court appointments. 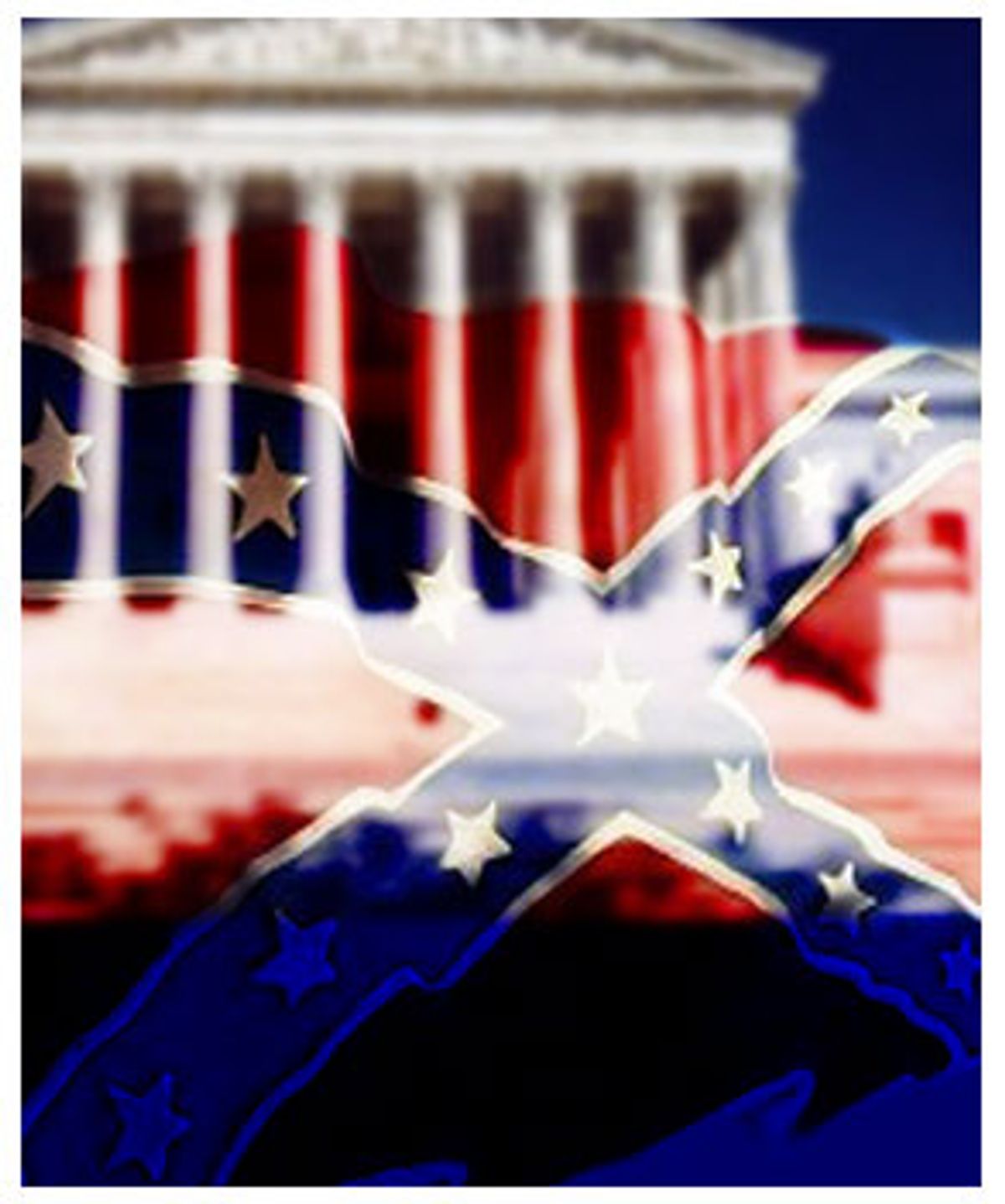 The recent recess appointments by President George W. Bush of two controversial Deep South Republicans to federal courts of appeals indicates that the Republican "Southern strategy" remains alive and well. Much of the Democratic opposition in the Senate to confirming Charles W. Pickering of Mississippi and William H. Pryor of Alabama focused on matters suggesting insensitivity to civil rights issues. Opponents cited the records of both men that included criticism of or efforts to limit important remedies or provisions of the Voting Rights Act.

The use of recess appointments to the federal courts has its place. To overcome the opposition of the then-solid phalanx of Southern Democrats in the Senate, President Lyndon Johnson used a recess appointment to place Thurgood Marshall on the 2nd Circuit Court of Appeals. That appointment provided a steppingstone for promoting Marshall to serve as the first African-American on the Supreme Court.

For years Marshall, who took the lead role in Brown vs. Board of Education, had directed the legal assault on segregation. The Supreme Court decided that case 50 years ago this May, launching a revolution in race relations.

Near the end of his term President Bill Clinton -- gain to break new ground in African-American judicial representation -- appointed Roger Gregory to be the first African-American judge on the 4th Circuit Court of Appeals. The jurisdiction of that court, based in Richmond, Va., extends from Maryland to South Carolina.

Clinton made that appointment to overcome obstructionist tactics by Republican Sen. Jesse Helms of North Carolina, which blocked a vote by the Senate. More than four decades earlier, Helms as a TV commentator in Raleigh, N.C., had helped sow the seeds of the Southern strategy.

In 1961, Republican Sen. Barry Goldwater of Arizona spelled it out in a speech in Atlanta to a regional gathering of Southern Republican leaders. "We're not going to get the Negro vote as a bloc in 1964 and 1968, so we ought to go hunting where the ducks are," he declared. School integration, he continued, was "the responsibility of the states. I would not like to see my party assume it is the role of the federal government to enforce integration in the schools."

Three years later, on his way to winning the Republican nomination for president, he voted against the 1964 Civil Rights Act. Democratic Sen. Strom Thurmond of South Carolina responded by switching to the Republican Party. His 1948 segregation-based Dixiecrat third-party presidential campaign supporters followed him. In Mississippi the 1964 state Republican Party platform declared that segregation was "absolutely essential to harmonious racial relations." Thurmond played key roles in 1968, first in blocking the confirmation of liberal Democrat Abe Fortas as chief justice. Thurmond had gotten a commitment from Richard Nixon to appoint "strict constructionists" to the Supreme Court if Nixon was elected president. Thurmond played a key role in building and holding critical Southern support at the Republican national convention for Nixon to win the nomination. In the fall, Thurmond campaigned vigorously across the South, thwarting segregationist Alabama Gov. George C. Wallace's third-party candidacy and allowing Nixon to win most of the region.

Nixon's four appointees to the Supreme Court included current Chief Justice William Rehnquist, under whose leadership the court has steered a consistently conservative course. That direction has meant the continuous cutting back of the civil rights gains of the decade and a half after Brown.

Ronald Reagan paid tribute to the Southern strategy. He opened his 1980 campaign in the South at the Neshoba County Fair in Mississippi, an essentially white festival and political gathering in the county where three civil rights workers were murdered in 1964 by the Ku Klux Klan. His subsequent talk of "welfare queens" removed any ambiguity.

Overlooked in all of this are a handful of mostly Republican judges in the South, nominated by President Eisenhower and mostly handpicked by Herbert Brownell -- Ike's campaign manager and then attorney general. For a decade and a half after Brown, they made the 5th Circuit Court of Appeals, which then covered six of the 11 states of the Confederacy, the institutional equivalent of the civil rights movement. Usually led by Chief Judge Elbert P. Tuttle and his close ally John Minor Wisdom -- the two had co-chaired "Southerners for Eisenhower" in his campaign to win the 1952 Republican nomination -- this court transformed Brown vs. Board of Education into a broad mandate for racial justice.

This small band of judges came to view Brown as incorporating into the Constitution the concept of equality expounded in the Declaration of Independence. They extended this principle well beyond integration of the region's public schools to include public transportation, voting rights, parks and playgrounds, jury selection, and discrimination in employment -- and also applied it to such powerless groups as prison inmates and the mentally ill.

Subsequent Republican administrations have basically ignored those judges. Many historians remain only vaguely aware of their story, but their "Southern jurisprudence" has begun to attract academic attention.

Like a balloon filling with helium, their cases not only expanded the concept of legal equality, but they also developed many of the principles incorporated into the landmark 1964 Civil Rights Act and 1965 Voting Rights Act. The 5th Circuit on which they served covered Alabama, Florida, Georgia, Mississippi, Louisiana and Texas.

In 1980 that court was divided. The 5th Circuit, on which Pickering now serves, retained Mississippi, Louisiana and Texas. A new 11th Circuit, the new home for Pryor, includes Alabama, Florida and Georgia. For racially conservative white Southerners, President Bush has sent a clear message.

Jack Bass, a professor of humanities and social sciences at the College of Charleston, is the author of "Unlikely Heroes," the story of the Southern federal judges who implemented Brown vs. Board of Education, the Supreme Court's 1954 school desegregation decision. His biography of Judge Frank M. Johnson Jr., "Taming the Storm," received the 1994 Robert F. Kennedy Book Award.