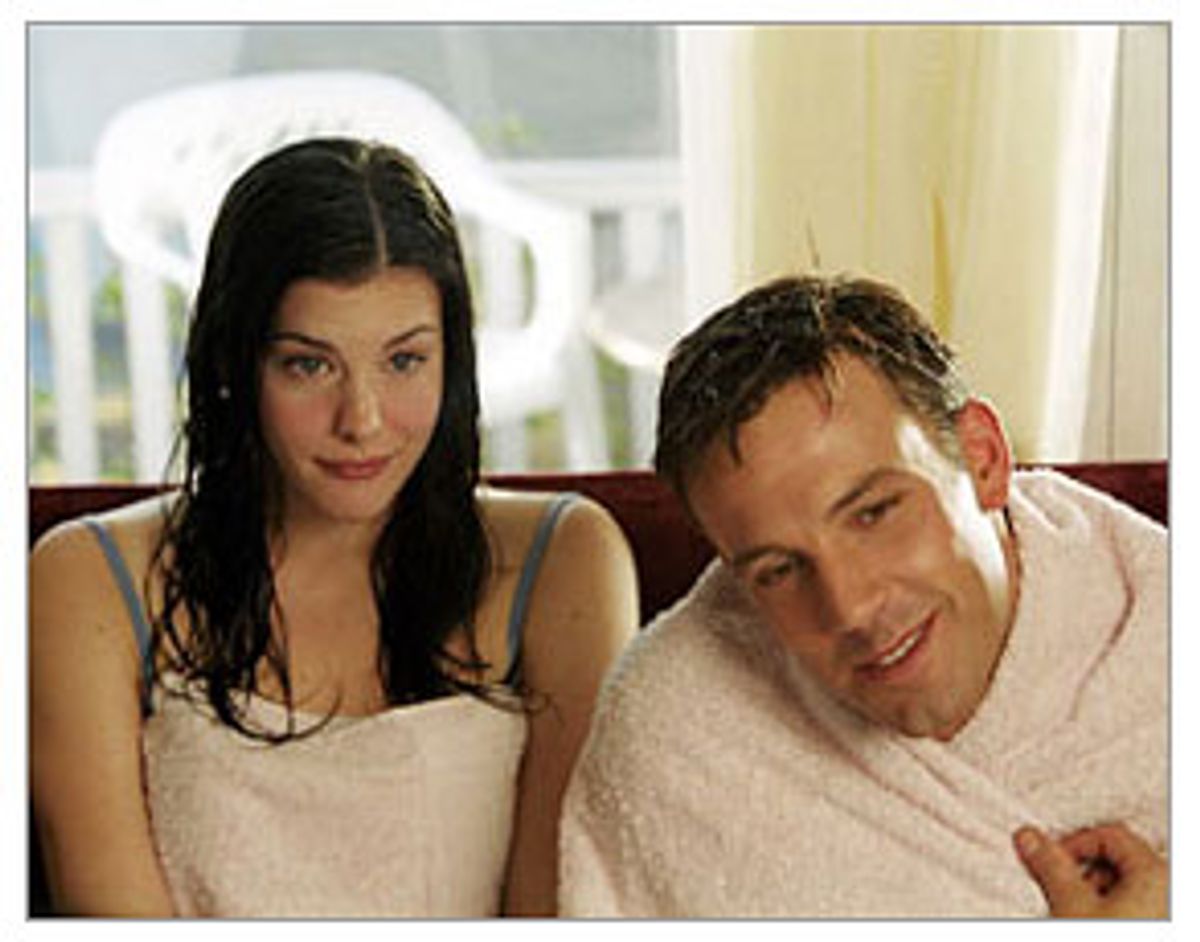 Forget the overexposed bliss of motherhood: Nearly everyone I know who has ever become a father has fallen in love with it. And in some ways, fathers have it harder than moms. Even stay-at-home dads can find themselves floating outside that special bubble that encircles mothers and their children -- no matter how close they are to their kids, that's a mystery they're locked out of.

Although it's usually a sign to head for the hills whenever a director makes a movie he decrees is "personal," with "Jersey Girl," Kevin Smith hasn't completely lost his head. Inspired by Smith's own awe and amazement at being a father, the movie is modest and entertaining, with a minimum of sentimental goo, and it demands little of us except a good-natured willingness to go with it.

That said, "Jersey Girl" (which Smith both wrote and directed) is in essence just another movie about parenthood with a set of target points to hit, even though, admittedly, Smith doesn't nail those points in the most obvious ways. The movie is much more interesting for what it says -- or, more specifically, doesn't need to say -- about class distinctions. Fatherhood may be the great role of Smith's life, but he's smart enough to know that it's not just whom we come from that matters, but where. As an ode to fatherhood, "Jersey Girl" is sweet without being particularly deep; but Smith is really onto something when he nudges against the ways in which the geographic landscape of a life merges with the genetic one.

Smith, like Bruce Springsteen (the movie takes its name from a Tom Waits song that Springsteen covered, turning it into one of his signatures), has always been an extremely vocal supporter of New Jersey, where he was born and raised (and where he, like Springsteen, makes his home). That doesn't mean he's above poking fun at it -- if anything, his regard for the place entitles him to use a more acutely sharpened stick.

In "Jersey Girl," Ben Affleck plays Ollie Trinke, a guy from New Jersey who makes it big in New York as a music publicist in the early '90s. He meets and falls in love with a beautiful book editor, Gertrude (the quickly dispensed-with Jennifer Lopez, whose presence lingers in the movie about as long as it takes for a New York subway door to close on your coattails). The couple's big test comes when Ollie brings Gertrude home to Jersey, to the clapboard house where he grew up, to meet his grizzled-wiseacre dad, Bart (George Carlin, whose performance is so understated and devoid of sentimentality that it comes off as the most deeply emotional one in the movie). Gertrude hits it off with Bart, happily heading out with him to the local dive where he and his cronies hang out. In other words, she doesn't just accept where Ollie came from; she sees it as being as much a part of him as the way he walks or his eye color, even though he has, by choice, left it far behind.

Ollie is overjoyed when Gertrude becomes pregnant. And he's devastated when she dies giving birth to their daughter, also named Gertrude. For the first few months of young Gertrude's life, Ollie can barely bring himself to look at her, leaving her in Bart's care while he trots off to his job in the city. But his stress and grief, probably combined with a subconscious wish to jump out of the rat race, lead him to commit a huge public gaffe, which costs him his job and, in turn, forces him to learn to be a dad.

Flash-forward to 2001. Gertrude (she's played by newcomer Raquel Castro, who looks uncannily like a very young version of Lopez) is now 8, and her dad is working with his dad as a street sweeper and all-around public works guy in the borough of Highlands, N.J. She announces that for a school production, she needs to enlist a parent to help her perform a number from a Broadway play. Will her father take her to see "Cats"?

Ollie hems and haws. Before he even gets around to telling her that "Cats" has already closed, he tells her flatly but not unkindly that "'Cats' was the second worst thing that ever happened to New York City." After she begs relentlessly, he promises to take her to another play of her choice: She picks Stephen Sondheim's raucous fest of butchery and cannibalism, "Sweeney Todd," and the movie progresses from there.

The most immediate pleasures of "Jersey Girl" stem from the way Ollie and young Gertrude relate to each other. Just as Affleck doesn't play down to Castro, Ollie doesn't talk to Gertrude as if she were a moron (as, unfortunately, so many well-meaning parents seem to do with their own kids). When she seizes on the "Sweeney Todd" ad in the newspaper, Ollie advises her matter-of-factly, "Now you know that's a singing play, right?" and then proceeds to tell her how he lost a bet with someone at work once and had to see a "singing play" performed by people on roller skates -- an underplayed and exceedingly funny way of warning a child about the danger of musicals, the same way you'd warn them about unfamiliar dogs or strangers with candy.

"Jersey Girl" is hardly Smith's funniest movie, but it does give us an amusing little window into what he must be like as a parent. Every movie about the early days of parenthood has to have at least one (and hopefully only one) poopy-diaper joke, and Smith comes through with the goods: His poo gag is typically Smith, featuring a cockeyed Greek chorus in the form of a bike-messenger dude who's knowledgeable about the inadvisability of wiping from back-to-front.

Smith also gives Affleck some great lines (at one point Ollie the publicist announces derisively, "Like the Fresh Prince of Bel Air is going to have a movie career!"), and Affleck's relaxed performance suggests that the two have an affable, easy relationship, building on ground they established years ago when they worked together on Smith's breakthrough picture "Chasing Amy."

The real revelation of the picture, though, is Liv Tyler as Maya, the video-store clerk with whom Ollie becomes friends and later -- some might say too much later -- falls in love. When we first see her, she's perched behind the video-store counter like a librarian goddess from an alternate universe: The black-rimmed glasses she wears are about the only thing that tether her to earth; she's so luminous she looks as if she could float away at any minute.

Tyler isn't just spectacular to look at. She's a true romantic-comedy star. Her breathy, whisper-of-satin voice is reminiscent of Judy Holliday or Marilyn Monroe, and like those actresses, she radiates a sweet spaciness that doesn't prepare you for how bracingly straightforward she is. Tyler is entrancing in "Jersey Girl": It's a smallish role, but it's the kind that can redefine a career, provided there are enough filmmakers out there with their eyes and ears open.

Smith has always had terrific taste in actresses. (I wish Alanis Morissette, whom he cast as God in "Dogma" -- and who later made an appearance on "Sex and the City" -- would do more acting. She has a lunatic spark that's something to behold.) He obviously took great care in casting Castro: She comes off as intelligent and appealing without overheating the moppet meter -- in other words, she doesn't have the cloying faux-grown-up cuteness of, say, Dakota Fanning.

"Jersey Girl" is an affable picture with plenty going for it. And yet there's something fuzzy and indistinct about it too. Even though Smith's approach, if not the bare bones of his story, is engaging and original, there's still something disappointingly conventional about the picture. Smith clearly put his heart into it, yet it still has more of a mainstream sheen than most of his other movies.

But Smith is attuned to class issues in a way few popular filmmakers are, without ever making the mistake of turning them into his major subject. (In that respect, I'd put him in the same league as the Farrelly brothers: These are filmmakers who write characters first and then give them occupations later. You'd never catch either Smith or the Farrellys setting out to make a picture about a humble sanitation worker who -- surprise! -- also happens to be a human being with thoughts and feelings just like ours.) Ollie seems happy enough with his New Jersey life. But there's a part of him that aches to be back on his own in the big city, earning a living in a way that makes, as he puts it, a shower at the end of the day an option, not a necessity.

When he finally gets his chance to interview for a big-city job in his old field, he stands in the middle of his father's comfortable but hardly luxurious living room and announces to everyone there (including Gertrude, Maya, Bart and his barroom pals) that he can't wait to get away from street sweeping in Highlands.

The fact that Bart's face doesn't fall as he listens to all this is what's most revealing: The obnoxiousness and insensitivity of Ollie's tirade is so obvious that it barely merits a reaction. But Carlin still telegraphs, subtly, how much it stings. And later, Maya takes Ollie aside and tells him matter-of-factly, without scolding him, why what he did was so hurtful. Ollie was telling them, she explains, that "what they have isn't good enough."

That statement is so obvious that Maya shouldn't even have to make it. But in romantic comedies, as in real life, there are plenty of times when people need to hear the obvious, and Smith doesn't shy away from that. "Jersey Girl" doesn't make any particularly profound statements. But like almost all of Smith's movies, it does show basic good sense, and that's sometimes much more valuable than earthshaking emotional revelations. Good sense, after all, is one of the best things you can pass on to your kids. Or, for that matter, your audience.