Killer comedy? Not exactly. Tom Hanks, Irma P. Hall and a cat named Pickles do their best, but this Coen brothers remake just doesn't pay off. 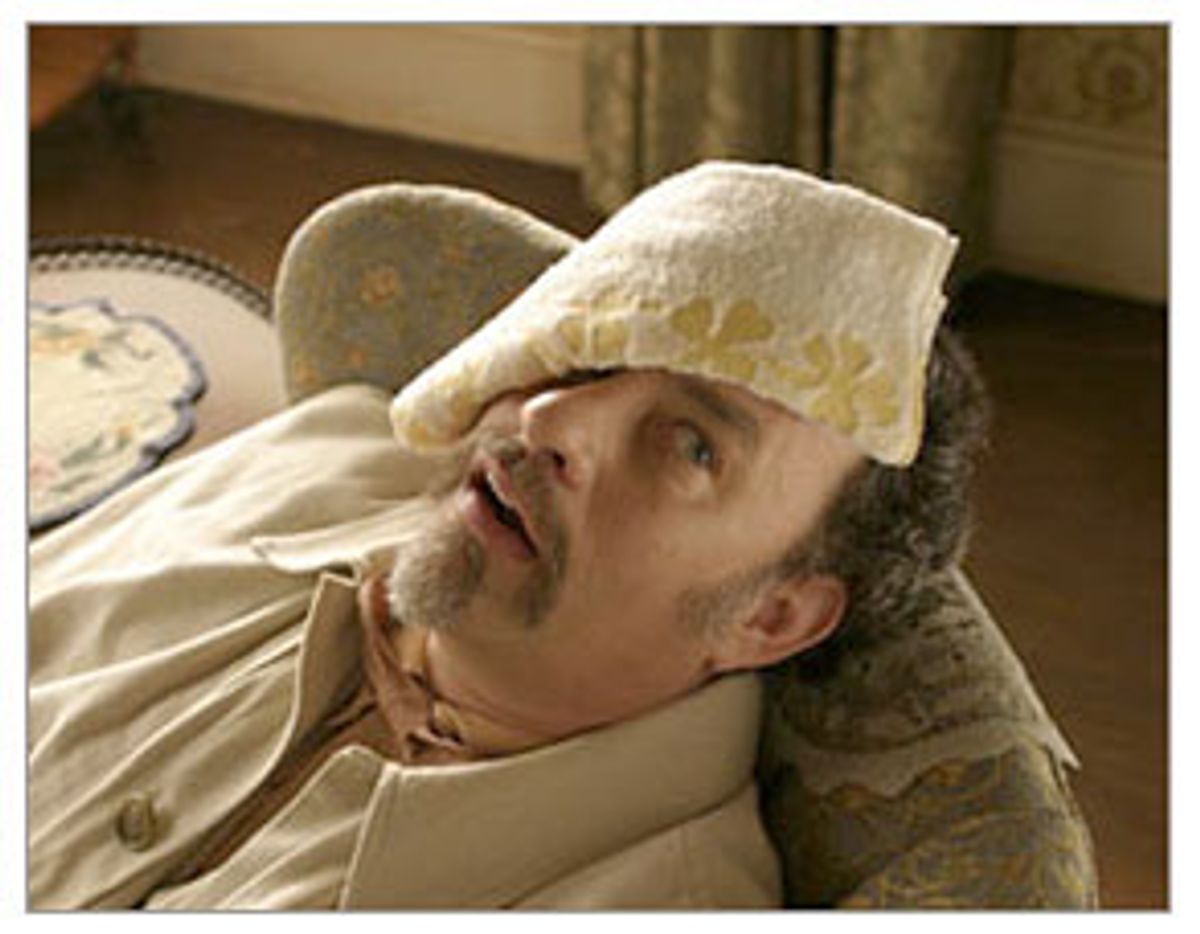 The comedies produced by Britain's Ealing studios in the '40s and '50s tend to be remembered as gentle ticklish affairs, epitomized by Alec Guinness' portrayals of the sort of character he deemed "fubsy." Guinness meant the word to describe timid, ordinary men whose minds have seized on some notion that brings an obsessive gleam to their eye.

The 1956 "The Ladykillers," directed by Alexander Mackendrick and written by William Rose, was a different story. Blacker and wilder than the usual Ealing comedy, the movie still looks pretty wild today. Guinness starred in this one, too, but instead of playing another of his "fubsy" characters, he was a criminal mastermind, outfitted with a hideous pair of protruding teeth. Pretending to be a musician he rents a room from a little old Victorian lady (the inimitable Katie Johnson) who believes that the cronies who come to visit Guinness (including a very young Peter Sellers as a Teddy Boy crook) are all part of his string quintet. She doesn't have a clue they're using her home to plan a robbery. When she finds out and insists that the robbers must be gentlemen and return the money, the gang decides it's time to dispose of her. Only they're the ones who wind up getting picked off, one by one.

The comedy of "The Ladykillers" comes from the intrusion of murder into a genteel Victorian atmosphere of tea cozies and middle-class propriety. The movie is like a daydream in which the ordinary is transformed by an enveloping sense of ominous comic dementia. The contrast still gives the movie a pleasurable jolt (just as another Ealing great, "Kind Hearts and Coronets," does).

Joel and Ethan Coen, who wrote and directed the new remake of "The Ladykillers," have no sense of the ordinary. The worlds of their movies are one large exaggeration -- and the world of this new "Ladykillers," small-town Mississippi, is so bumptious to begin with that there's not much for the criminal behavior to play off.

The Coens have come up with a good funny idea in realizing that the only contemporary American equivalent to proper old Victorian pensioners are the righteous black church ladies who dress in floral prints and "sensible" pumps, who wouldn't go out of the house without a hat, and who are quick to tut-tut anything that reeks of disrespect to them. (I'm lucky to get a "humph" when I nod hello to those women in my neighborhood on Sunday morning.) When we first see Irma P. Hall's Marva Munson she's complaining to the sheriff about a local boy who's gotten himself a blaster and is disturbing her peace with that "hippity-hop" music. Marva moves slow, and part of the time she spends talking to her late husband's portrait is taken up with complaining about her ailments, but one look at her (she's built like a Humvee doing a wheelie) tells you she's indestructible.

The Coens are playing with some dicey racial humor here but in the extreme unreality of their world, Marva is no more an exaggeration than anyone else. Hall plays for laughs the sort of strong matriarch figure she played straight in the enjoyable and little-seen 1996 movie "A Family Thing." She had a quiet command in that picture and here she commands by sheer force of will. There's no denying she's funny.

But because she doesn't have a trace of vulnerability (as Katie Johnson did in the original), the movie loses one of its potential sources of comedy. The Coens have given her some good touches, like her pride in sending $5 a month to Bob Jones University ("I'm an angel," she declares), but you're never charmed by Hall the way you were by Johnson. Katie Johnson's old lady triumphs because obliviousness is built right into her character. She doesn't want to see anything nasty and so she barely does. Marva sees nastiness everywhere, and there's no comic suspense in watching a character who's always primed to explode in indignation. The Coens do nothing with the comic potential of Marva believing that her faith in God is what protects her. (Listening to the gospel numbers T-Bone Burnett has chosen, you just think that the Coens are hoping to repeat the success of the "O Brother Where Art Thou?" soundtrack.)

With the exception of the basset-faced J.K. Simmons (who plays the shrink on "Law and Order") as a demolitions expert with irritable bowel syndrome (he has a speech about meeting his girlfriend at a weekend for "Irritable Bowel Singles" at Grossinger's), the gang isn't particularly funny or memorable. Marlon Wayans is the hip-hopper in the group and his role does fall into the racial caricature that Hall's escapes (he seems to be around solely to get laughs out of how many times he can say "fuck").

As the head of the gang, though, Tom Hanks is primed to be better than the material allows him to be. He's got protruding teeth, just as Guinness had, and when he laughs he sounds like a bloodhound snuffling out a scent. Hanks is dressed in a foppish cape worn over his linen summer suit and he never settles for one word when three or four will do. He's an erudite ass who acts and talks to leave the heavy scent of magnolia trailing behind him. It's good to see Hanks being silly again, and good to see him sloughing off the Jimmy Stewart niceness that's threatened to overwhelm him by playing nasty. But this performance should really take off and it just lies in the movie, an amusing oddity.

There's one other performance of note, an orange tiger cat that goes by the name of Pickles. His best moment is a variation on the famous gag in "Yojimbo" where a dog scurries off with a human hand in its mouth, but Pickles proves himself an admirably deadpan performer in his reaction shots.

Would that the Coens had taken some lessons from Pickles. As with their last movie, "Intolerable Cruelty," I had the feeling that "The Ladykillers" could have been really funny if they had simply trusted the material and not felt the endless need to tweak it. Part of the problem with "The Ladykillers" is that the vulgarity feels so premeditated it has no ribald surprise. But then nothing in the movie is really surprising. When Irma P. Hall smacks Marlon Wayans upside the head, the joke doesn't explode because she looks like she's dying to smack someone upside the head from the moment we first lay eyes on her.

The Coens have a sense of the antic and the comic grotesque; they have a knack for silly, absurd details that go off like a firecracker. But they lack the one thing crucial to sustaining a comedy: patience. They have no sense of delaying laughs while preparing for the payoff. "The Ladykillers" is structured like a Mad magazine parody where there's a promised joke in each frame. It doesn't add up to a movie.