The real Powell Doctrine is self-interest as national interest. 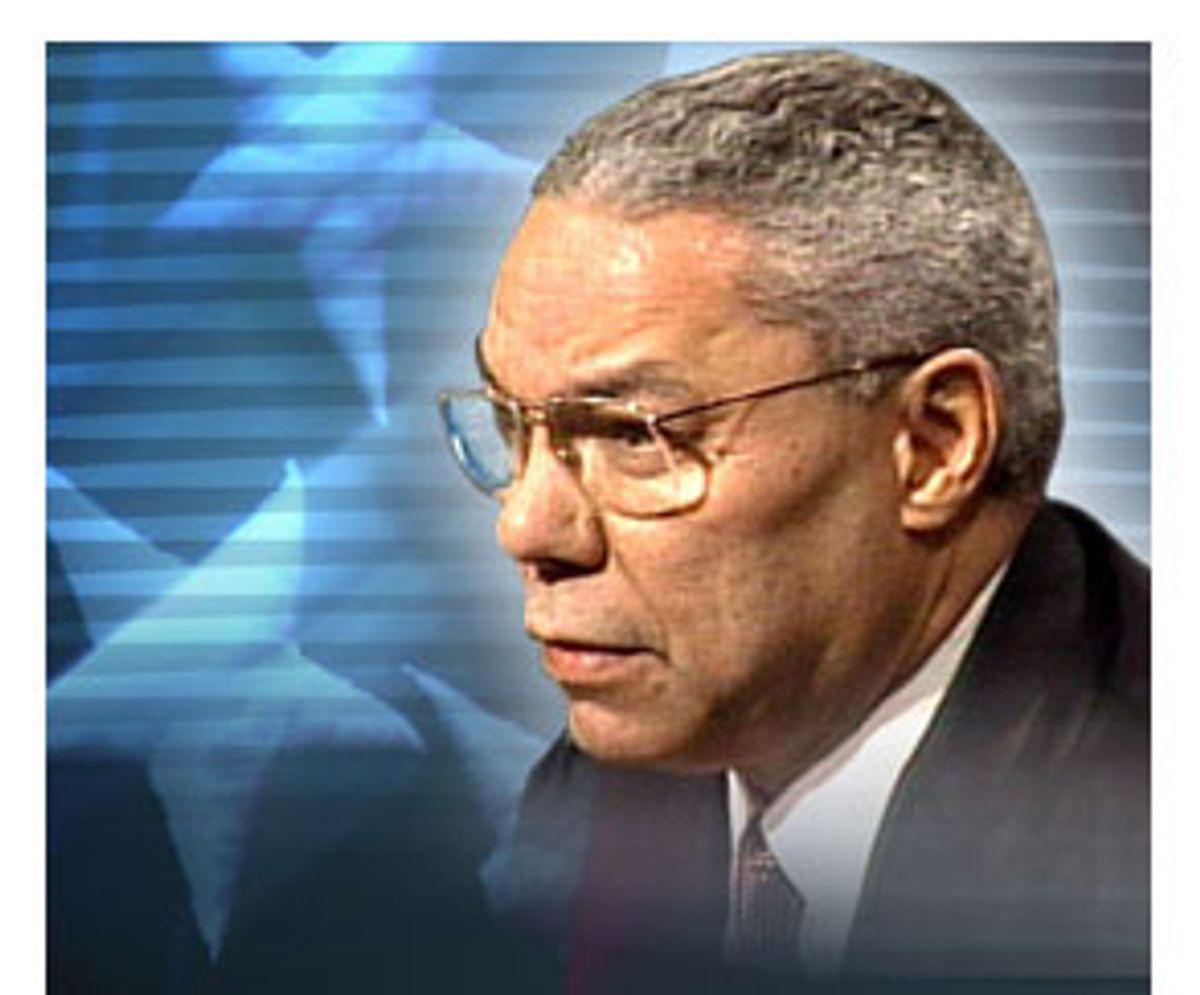 As secretary of state in the years following World War II, Gen. George C. Marshall thought he should hold himself above domestic politics. The current occupant of that office takes a different approach. The Middle East is erupting again, the Bush administration's road map for peace between the Israelis and Palestinians is leading nowhere, and Israeli Prime Minister Ariel Sharon believes he has a blank check for any unilateral action. So what has Secretary of State Colin Powell been doing? He has been attacking Sen. John Kerry.

Powell will step down as secretary of state early next year regardless of who wins the presidential election in November. A little unfinished business like peace in the Middle East won't prevent his retirement. The allure of private life will prove too strong as the boardrooms of countless corporations beckon. He will also be able to go back on the speaking tour and easily command double the $60,000 he used to make for his 20-minute motivational pep talk.

Now when he speaks, all he gets for his trouble is questions: questions about why no weapons of mass destruction have been found in Iraq when he assured the world a year ago they were there. Questions like the ones raised in a recent report by Rep. Henry Waxman, D-Calif.: It documents 125 occasions when Powell and the four other highest officials in the Bush administration made a total of 237 misleading statements exaggerating and distorting the threat posed by Iraq.

To add to his irritation, criticism from the left has not made him immune to carping from the right. When the Spanish voted their government out of office after it tried to take political advantage of the recent terrorist incident by blaming the Basque separatists, Powell got the blame. Some conservative commentators asserted he should have prevented a friendly government's demise by its own hand by selling the administration's policies better. For the true believers on the right it is always the salesman, not the product, that is defective.

But beyond the questions about his veracity and effectiveness, the biggest incentive for leaving government service is the book deal. Powell will have the $10 million advance of former President Clinton to aim for, and some publisher will no doubt be willing to help him surpass that record amount. With that much to spend, getting out at the end of this term while he can still enjoy it makes sense.

The book will be a much greater challenge than the last one, however. His autobiography, written by Joe Persico and published in 1995, was compelling because it told the story of an American dream, how he rose from modest beginnings to become America's highest-ranking military officer as well as the first African-American to reach that level. The coming book about his days as secretary of state will have to deal what he accomplished in that office.

Powell is not without his fans. Those who worked for him and those for whom he worked will lament his stepping down. The State Department bureaucrats will miss him because Powell is the kind of general who always takes care of his troops. His stature helped boost State's budget, allowing much-needed technological upgrades and additional hiring. He fought for and won the money to allow business-class travel on particularly long flights. He then ensured that perk would not be denied by a stingy boss by ordering that permission had to be obtained to fly anything less than business class. He also attended the swearing-in ceremonies of new ambassadors and honored those who were retiring from government service.

Those for whom Powell worked will also miss him. He is the consummate loyalist, and for good reason. Like Gen. Alexander Haig, who served as secretary of state in the Reagan administration, Powell earned at least three of his four stars on the bureaucratic battlefields of Washington, rather than holding progressively more responsible military commands. Powell owes his stature, status and wealth to the Republican elite who rewarded him for always faithfully serving them.

The combination of a military tradition of obedience to authority together with the mindset of a bureaucratic staff aide led to Harry Belafonte's unfortunate description of Powell's mentality as being reminiscent of a "house slave." It was unfortunate because it diverted the discussion from what role the secretary of state should play to a debate about racial slurs and stereotyping.

Powell and his aides have nurtured the impression that he was often the voice of moderation and reason in arguments over policy within the administration. Supposedly, when he was nevertheless rolled by the neoconservatives, he felt it his duty to carry out the policy. Whatever objections he may have had must have been based on a difference in tactics, not on principle -- at least not any principle worth resigning over. That may be because he has made a career out of promoting himself and calling it the national interest. He didn't resign on principle because his overriding principle is self-interest.

That is why Powell has applied the famous Powell Doctrine on the use of military force so selectively. When a Democratic president wanted to use military force in Bosnia, Powell devoted himself to thinking of obstacles to prevent it. When Republican presidents have wanted to use force, Powell may have argued initially for another strategy, but in the end he always found it more important to obey his benefactors than to adhere to his doctrine.

Powell likes to compare himself to Marshall. But just as Dan Quayle was no John Kennedy, Colin Powell is no George Marshall. Marshall was the architect of the Allied victory in World War II. His vision created a new spirit of cooperation, mutual help and support between Western Europe and the United States, which led to the establishment of the NATO alliance and the Marshall Plan that rebuilt Europe. He is the only soldier ever to win the Nobel Peace Prize because he was seen as a true internationalist who promoted peace through cooperation and understanding among nations.

Powell will be remembered as the first African-American to be chairman of the Joint Chiefs of Staff and secretary of state. But he will also be remembered militarily only for having twice defeated a feeble Iraqi army and for the conquest of Panama. His contribution to economic development abroad will be his support for the Millennium Challenge Account -- a half-baked attempt to remake foreign aid by turning it into a source of pork for crony capitalists.

As for promoting peace and understanding, Powell will be thought of as the smiley face on a foreign policy designed by extremists who think understanding other nations is a sign of weakness. His successor will have to deal with repairing our relations with "Old Europe" and trying to see that NATO survives as a viable institution.

While Marshall sought to distance himself from partisan politics, Powell is already being trotted out on the campaign trail to go after any of the administration's growing number of critics. He is also being used as a symbol of diversity in a party that counts Strom Thurmond, the equal opportunity sexual predator, among its heroes.

Powell will work hard in his book to construct a positive image of his legacy while at the same time trying to make up in gravitas what it lacks in gossip. He will cherry pick the historical record much as he did recently in Foreign Affairs magazine. In that article he asserted President Bush's foreign policy is not unilateralist, does not favor military means over diplomacy and is not obsessed with terrorism. In the book, he will be equally selective and as implausible in arguing that he has left the world a better place than he found it upon entering office.

In so doing he will ignore the evidence to the contrary in the same way he made the case for invading Iraq. The fact remains that Powell has been the faithful good cop as the bad cops have run the show and brought America's image to an all-time low in most parts of the world. Those who work for Powell and those he works for may miss him when he is gone. The rest of us should not.