When Condoleezza Rice appears before the 9/11 commission, here's what she should be asked. 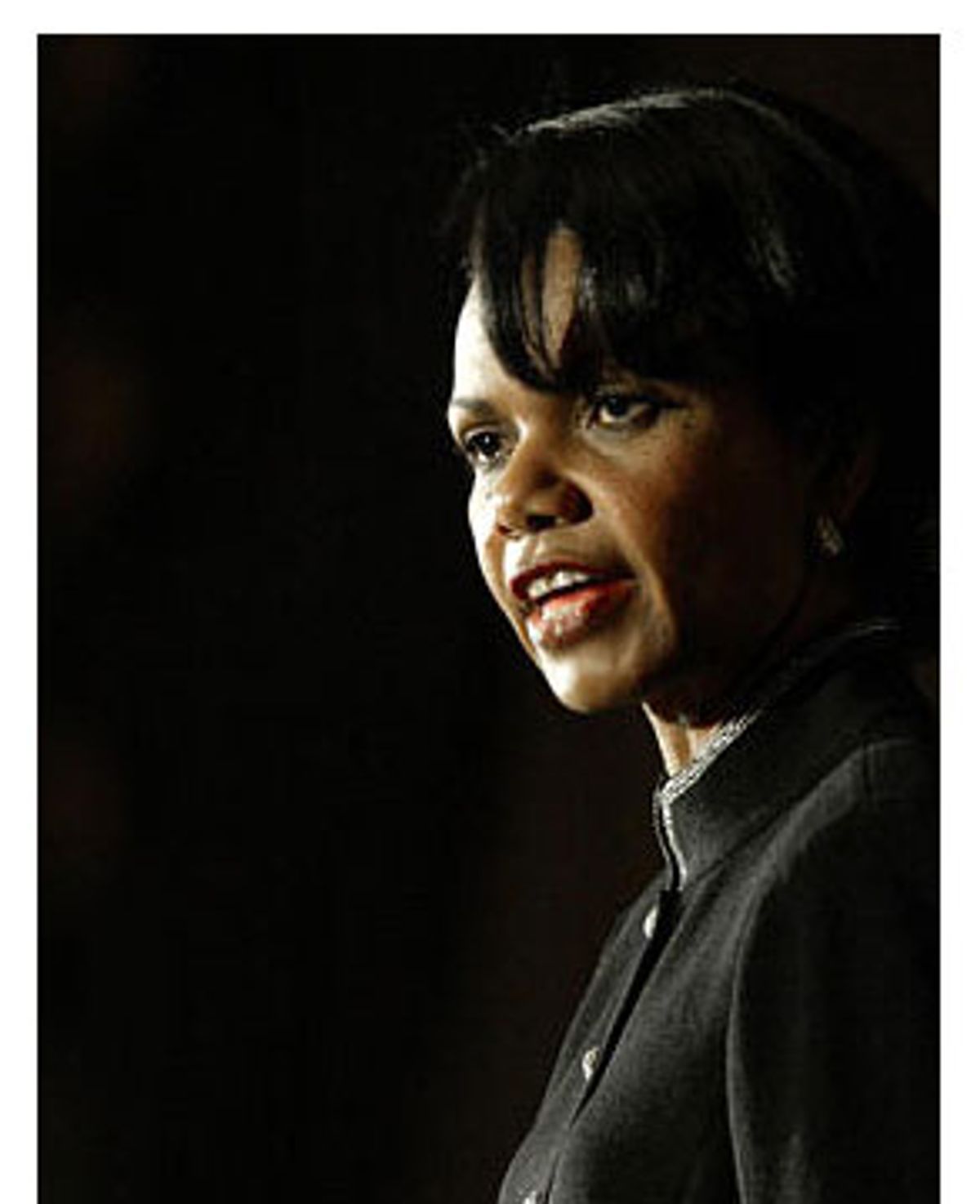 After battling the 9/11 commission, the Bush White House has capitulated. For months, it claimed that National Security Advisor Condoleezza Rice could not testify publicly and under oath before the commission because that would discourage future presidential advisors from providing no-holds-barred advice to the commander in chief. But in the wake of former counterterrorism chief Richard Clarke's dramatic appearance before the commission, the Bush administration has suddenly dropped its opposition and announced Rice will testify. The White House had a tough time defending its stand after Rice appeared on various television shows discussing internal administration deliberations as part of the get-Clarke crusade. President Bush, who initially opposed the creation of the commission, also conceded that he would testify privately before the entire panel. The White House had previously insisted he would grant an audience only to the chairman and vice chairman of the 10-member commission.

All this means that the activity of the 9/11 commission, which is supposed to hold more hearings in the months ahead and release a final report by July 26, will continue to draw intense public attention. Working under a tight deadline (because Republicans want it out of business before the final stretch of the 2004 campaign), the commission will be assessing the nettlesome facts about the administration's performance on terrorism. These are some of the questions it may be asking Rice when she finally appears before the panel:

2) The congressional intelligence committees also reported that in July 2001 an intelligence report warned, "Based on a review of all-source reporting over the last five months, we believe that UBL [Usama bin Laden] will launch a significant terrorist attack against U.S. and/or Israeli interests in the coming weeks. The attack will be spectacular and designed to inflict mass casualties against U.S. facilities or interests. Attack preparations have been made. Attack will occur with little or no warning." The White House refused to let the intelligence committees say whether this warning was presented to the president or you, though committee sources told reporters it had been. Did you and the president receive this warning? If so, how did you or he respond? Did either of you call for any additional action or information? Was this warning included in the Aug. 6 PDB? And did that PDB prompt you or the president to order the national security community to take specific steps? Why did the White House not want the public to know whether you or Bush had seen this warning?

3) In May 2002, you said, "I don't think anyone could have predicted that these people would take an airplane and slam it into the World Trade Center." Were you unaware at that point that intelligence reports dating back to the mid-1990s had indicated that al-Qaida and other terrorists were indeed interested in hijacking airliners and crashing them into high-profile American targets? When did you first learn of this reporting? After you became aware of such reports, did you ever ask whether the intelligence community and the U.S. military had considered the possibility of such a strike?

4) One interim report of the 9/11 commission says that the Clinton administration pressed the Saudi government to work with it to neutralize al-Qaida but that your administration made no effort to do so before 9/11. Why was that?

5) When Secretary of Defense Donald Rumsfeld testified before the commission, he said that prior to 9/11 he viewed al-Qaida as "a priority threat." But another interim report of the 9/11 commission notes that counterterrorism experts at the Pentagon said that Rumsfeld's team was "not especially interested in their counterterrorism agenda." Can you point us to evidence that Rumsfeld actually did see al-Qaida as a "priority threat"? Why did Rumsfeld not approve Richard Clarke's proposal to launch the Predator drone over Afghanistan at the only principals meeting held that considered terrorism in early September 2001? Did Rumsfeld want the funding for the Predator to go to missile defense instead?

6) Another report of the 9/11 commission says that "some CIA officials expressed frustration about the pace of policymaking [on al-Qaida] during the stressful summer of 2001." Did the CIA experts on al-Qaida have reason to be frustrated with the administration? If not, why would they tell the commission they were frustrated? Are they making it up?

7) The intelligence committees' final report on 9/11 quoted an FBI budget official who said that counterterrorism had not been a priority for Attorney General John Ashcroft before 9/11 and that the FBI had been pressured to cut its counterterrorism program to free up money for Ashcroft's other priorities. Were you and the president aware of this? Did such a move happen with your approval? If not, why were you not overseeing counterterrorism efforts as part of your job?

8) As you know, the issue of how much urgency the Bush administration assigned to the al-Qaida threat prior to 9/11 has become a contentious issue. You have argued that the Bush administration acted vigorously, and you have said, "We were all at battle stations." How then do you explain the remark made by the president to Bob Woodward for the book "Bush at War." Speaking about the period before the attacks, he said, "I was not on point, but I knew [bin Laden] was a menace, and I knew he was a problem ... I was prepared to look at a plan that would be a thoughtful plan that would bring him to justice, and would have given the order to do that ... But I didn't feel that sense of urgency, and my blood was not nearly as boiling." Did you feel a sense of urgency when the president did not? Can you point to a memo or document in which you expressed this urgency? If you did feel this way, what did you do to convey your own sense of urgency to the president? Did you fail to convince him? How did he respond? Is the president's account wrong?

9) During the presidential transition, you, President-elect Bush and Vice President-elect Dick Cheney received a briefing from the CIA that including the topic of al-Qaida. James Pavitt, the deputy director for operations at the CIA, told the commission that at this briefing he informed the three of you that bin Laden was one of the gravest threats to the country. Why, then, did the president not feel a sense of urgency, as he has told Bob Woodward he did not? Also, do you think it was appropriate for the administration to engage in an eight-month-long policy review -- at the deputies level, rather than at the principals level -- on such a pressing threat, when you knew that the deputies cannot implement policy?

10) The USS Cole was bombed in October 2000, killing 17 Americans. It took the CIA and FBI several months to determine al-Qaida was the culprit. Yet your administration apparently did not respond. Did you ever hold a meeting about how to react to the Cole strike? Did you ever discuss with the president what should be done? Did he ever as president bring up the subject of the Cole? Were you concerned that doing nothing might embolden al-Qaida and send the wrong signal?

11) Gen. Donald Kerrick, who was deputy national security advisor under President Clinton and remained on the National Security Council staff in the early Bush administration, says he wrote a classified memo to his replacement, Stephen Hadley, warning that al-Qaida was going to strike the United States again. "They never once asked me a question," Kerrick now says, "nor did I see them having a serious discussion about it ... They saw those problems through an Iraqi prism. But the evidence, the intelligence, wasn't there." Did you ever see this memo? Did you and Hadley discuss this memo or Kerrick's concern? Did you discuss Kerrick's concern with anyone on the NSC or with the president?

12) Richard Clarke has said that in June 2001 he was concerned that Bush officials -- including yourself -- were not addressing the al-Qaida issue with sufficient zeal and that he asked CIA chief George Tenet to brief you on the matter. Do you agree that you needed such a briefing? What did you think after receiving the briefing? Did you ask to hear more? Did you do anything in response to the briefing? Did you ask for regular briefing on the subject for yourself?

13) Clarke has maintained that he was excluded from all National Security Council meetings related to Iraq after 9/11 because he did not agree with the administration's policy on Iraq. Is that true? Did you have the habit of excluding staff members from meetings if they disagree with the prevailing view?

14) In early 2000, the CIA learned that Nawaf al-Hazmi and Khalid al-Mihdhar, two of the 19 9/11 hijackers, were inside or heading toward the United States. Yet the CIA did not share this information with the FBI -- which had an informant in San Diego in contact with the two -- until late August 2001. No one can know what might have happened had the FBI been informed that these two terrorist suspects were in the United States. But had the CIA passed this information to the FBI, it would have been possible for the FBI to track the men and perhaps, as the intelligence committees noted, "unravel the September 11 plot." This appears to have been one of the worst of the mistakes leading to 9/11. When did you and the president learn of this egregious error? Did you or the president ever ask Tenet to explain this screw-up? Why has no one been held accountable for this? Was the CIA wary of the FBI?

15) Why did your administration insist on classifying nearly the entire chapter on Saudi Arabia in the 9/11 report put out by the intelligence committees, after both Democrats and Republicans urged the White House to release at least portions of it?

16) Any commission that seeks testimony from witnesses must be concerned about the ability and willingness of witnesses to speak candidly and openly to the commission in public and private sessions. Did you participate in any discussions at the White House regarding how you could discredit or undermine Richard Clarke, a commission witness? Or are you aware of any such discussions? If so, who attended these meetings? What strategies were considered? What decisions were made? Did you approve the declassification of documents in an effort to try to discredit Clarke? CNN's Wolf Blitzer reported that administration officials were saying there were some "weird aspects" to Clarke's personal life. Did you hear any Bush official talk about spreading derogatory information about Mr. Clarke?

18) And while we have you, are you aware of any conversations or meetings about leaking the identity of covert CIA Valerie Plame operative to conservative columnist Bob Novak?