In this winning comic melodrama, Isabelle Adjani gives possibly her finest performace since bursting upon the film world nearly 30 years ago. 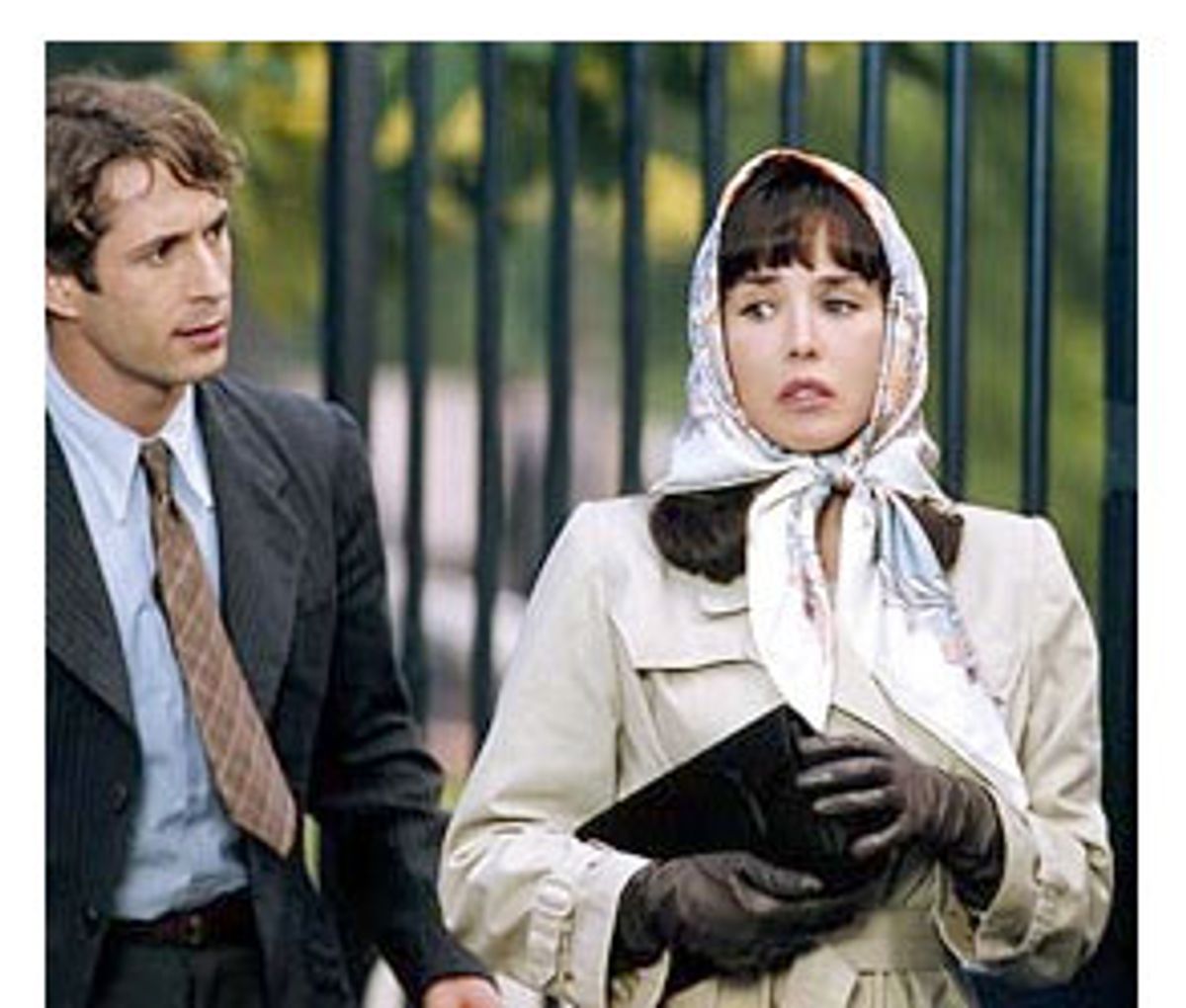 Who can imagine the burden of expectation put on the shoulders of a young actor who bursts into the consciousness of moviegoers by giving one of the greatest performances in the history of movies? Isabelle Adjani was only 19 when she starred in Francois Truffaut's "The Story of Adele H." (1975) and watching her you understood what the first moviegoers who saw Lillian Gish in "Broken Blossoms" and "The Wind" must have felt. But in nearly everything I've seen Adjani in since then, she has seemed remote, held back. Even the intensity she brought to "Camille Claudel" felt vague, more a display than a burrowing into the character. Adjani has seemed to be less an actor than a star in the Great Lady mold.

Playing a spoiled, shallow movie star in Jean-Paul Rappeneau's comic melodrama "Bon Voyage," which is set in 1940 as the Germans are advancing on Paris, Adjani is freed up. I haven't liked her this much in anything since "Adele H." Adjani is Viviane, a star of light comedies and musicals who, even with war inevitable, can cause government ministers to go into raptures about how she makes the French forget their troubles. With her big eyes and hair worn in a crimped bob, Viviane looks like a poodle who early on got used to being pampered and has never since been able to conceive of living any other way. When she asks if there's any way war will be averted, you can tell it's her own inconvenience she's anxious about. Viviane has spent her life latching on to one man after another for whatever they can do for her, and her antennae are always alert for the shifting of the winds that tells her it's time to change partners. She's a '40s star operating as a courtesan, only without the wit and the brains that characterized the most famous of les grandes horizontales.

Throughout "Bon Voyage," Adjani manages to stay oblivious in character. Like the movie she's in, Adjani is funny throughout and yet she never overdoes anything. Viviane is interested only in herself, and the way Adjani pops and bats those huge peepers of hers at any man she wants something from tells you that she reserves her greatest performances for her private life. She's so appallingly selfish and fickle that you can't help being delighted by her. Escaping from traffic-clogged Paris just ahead of the Germans with her new lover, Jean-Etienne (Gérard Depardieu), the French minister of the interior, she spies an old lover on the street and pops out of the car. When Jean-Étienne catches up with her, she convinces him she nipped out to buy a new hat. He's not a fool. She's that kind of woman. (And the new chapeau, a squared-off black-and-white fedora with ridiculous feathers pluming up from it, suits her.)

The lover Viviane sees is Frederic (Grégori Derangère), literally the boy next door who grew up loving her and who has continued to worship her from afar. The only time he's heard from her since she became a big star is when she calls him late one night and insists he come to her apartment. There, Frederic finds the body of a blackmailer she's killed (in self-defense, she says) and agrees to dispose of it for her. He's caught and takes the rap. When the prisons are evacuated before the German advance, Frederic and Raoul (Yvan Attal), the thief he's handcuffed to, escape. All of these characters meet up in Bordeaux, where some are scrambling to escape to England while the rich are waiting for Marshall Petain to "come to his senses" and appease the Germans. Among the throng is professor Kopolski (Jean-Marc Stehlé), a Jewish scientist who's desperate to get to England and give the Allies his research and materiel on building an A-bomb, and his young assistant Camille (Virginie Ledoyen). There's also Alex (Peter Coyote, whose presence is always a good thing) as yet another of Viviane's lovers.

If your head is spinning from that list of characters and entanglements, it's a compliment to Rappeneau that, though he's clearly mad for narrative, "Bon Voyage" never feels cramped or rushed. The movie is great fun. It offers the plush sense of relaxation that only smooth professionalism can deliver. These filmmakers know what they're doing. It's a very handsome entertainment. The cinematography by Thierry Arbogast (who also shot "Femme Fatale") drinks in the period interiors of Jacques Rouxel's production design and the period clothes designed by Thierry Delettre and Catherine Leterrier. But Rappeneau never makes the mistake of lingering on the period accouterments to the detriment of his story; he doesn't fall in love with his sets the way filmmakers working on a period picture often do. His means are often very economical. Rappeneau conveys the desertion of Paris as the Germans arrive with one shot: a long view of an empty street, one period auto parked at the back of the shot, and a line of German motorcycles streaming through.

Rappeneau clearly adores the wartime-intrigue melodramas he's taking off from here (pictures like Carol Reed's "Night Train to Munich"), the shots of black cars with rain streaming on them, women in trench coats and hats pulled low. For a slick commercial entertainment, "Bon Voyage" might almost be called delicate. The movie isn't a spoof or a debunking. Rappeneau is affectionately kidding all those movie conventions of the past and in the process reminding us of how enjoyable they were. He lets us luxuriate without wallowing (at times "Bon Voyage" plays like leisurely farce), and in the process he shows us how the virtues of narrative and pacing have been eclipsed in contemporary movies' indulgence of spectacle.

The way some French entertainments have treated the period of the Occupation might cause you to watch "Bon Voyage" with a wary eye. Truffaut's unfortunate "The Last Metro" even advanced the cushy suggestion that life sure was hard for the folks who acquiesced to the Germans. But one of Rappeneau's co-writers here was Patrick Modiano, who co-wrote Louis Malle's great "Lacombe, Lucien" about a French peasant boy who goes to work for the Germans. (A plea: The prints of "Lacombe, Lucien" have been in disrepair for years. With all the vital work being done in film restoration, it's time for someone to get to work on that picture.) A writer who works on as unsparing a film as "Lacombe, Lucien" isn't likely, even for the purposes of entertainment, to play into French myths about the wide support given the Resistance. There are glancing potshots at France's elite who are shown as simply wanting to get on with their lives of luxury and consider "politics" a rude interruption. If Viviane is a national idol, it's at least partly because her self-absorption fits right in. (The satisfying coda makes a clever contrast between her and the French who were working against the Germans.)

But the purposes of "Bon Voyage" are just about as political as those of the '40s entertainments that used the war as the backdrop for good thrillers. Among the old-movie virtues Rappeneau is celebrating here are the pleasures of colorful supporting characters. Depardieu doesn't get as many comic opportunities as he should (his bluster should be funnier), but he suggests a lighter version of the kind of powerful bulldog Wallace Beery played in "Grand Hotel." Virginie Ledoyen spends much of the movie in Harry Potter eyeglasses, and they are their own good joke, the thing always used to portray a pretty girl as a brain. It wasn't possible to feel sorry for Yvan Attal as the jealous husband of a movie star (played by Attal's wife in real life, Charlotte Gainsbourg) in his directing debut, "My Wife Is an Actress." (You can't feel sorry for a guy who doesn't like to watch his wife do love scenes and still gets to go to bed with Charlotte Gainsbourg every night.) He's very appealing here with just the right mixture of charm and cockiness. And Grégori Derangère has just enough of the puppy dog to his gangly good looks to make Frederic's sincerity and exasperated devotion to Viviane funny. Part of the fun of his performance is watching Frederic wise up. Rappeneau also provides a link to French movie tradition by casting, in small roles, Aurore Clement (who starred in "Lacombe, Lucien") and Edith Scob (who was the girl behind the mask in Georges Franju's poetic shocker "Eyes Without a Face").

I think only real crabs couldn't be entertained by "Bon Voyage," and yet the movie may be more appealing to older audiences than younger ones. The latter may just see it as a diverting example of old movie corniness. It may take some familiarity with the movies and conventions that Rappeneau takes off from here to see the parodic love in his evocation. Watching it is a little like stumbling upon a frayed valentine you put away years ago and then laughing with pleasure at how much it still means to you.