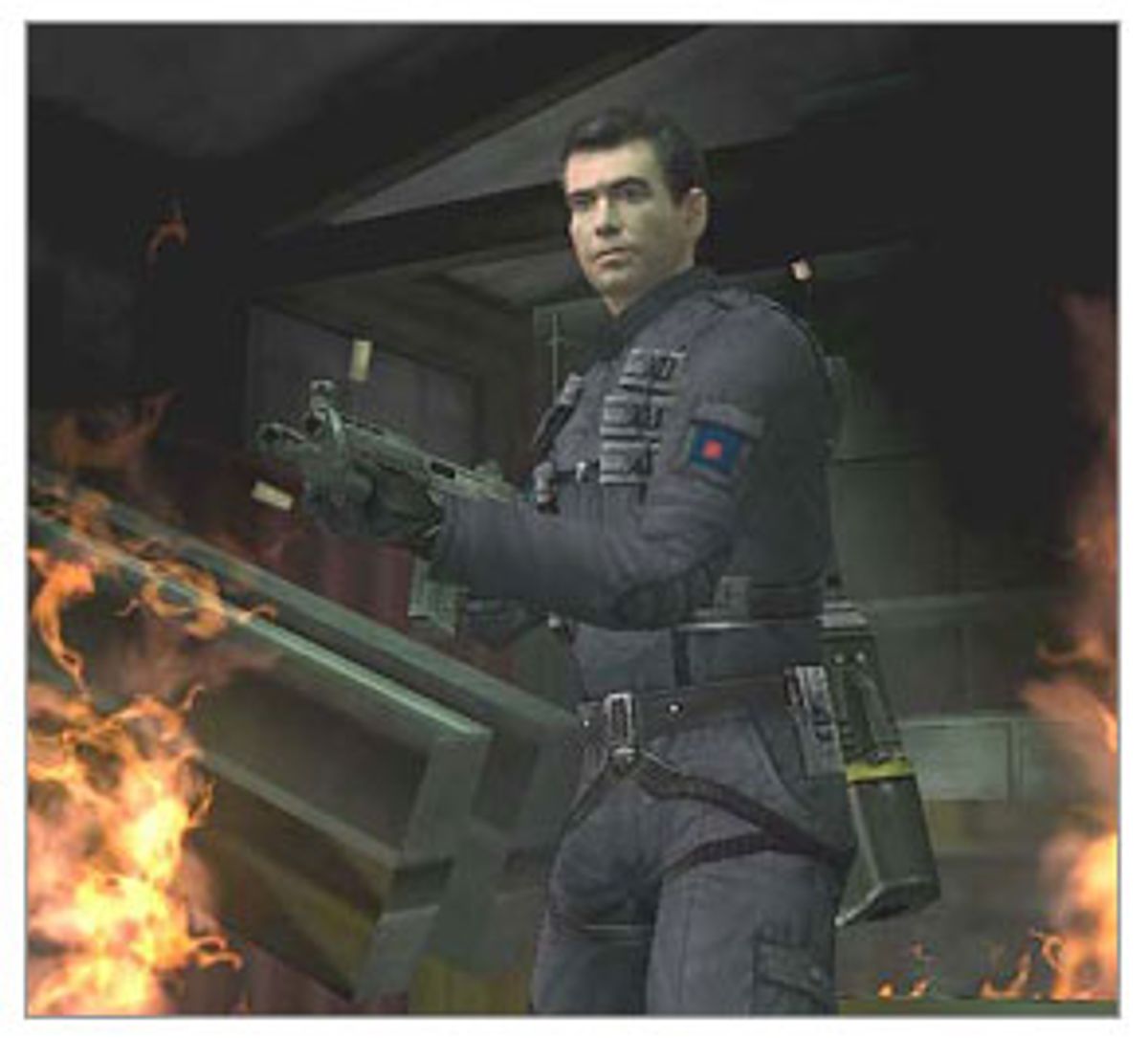 Jeff: Before we begin, let's play a game, shall we?

Tom: A game, I assume you mean, that doesn't involve pushing buttons or manipulating joysticks.

Tom: Bond! My turn: "From Russia With Love"?

Jeff: Oh, too easy! Beatles again. "The Man with The Golden Gun"?

Tom: Aha! Beatles-produced group! How about "Live and Let Die"?

Tom: All right. The game is loaded and here we go: Electronic Arts' feverishly anticipated new James Bond title, "Everything or Nothing."

Jeff: You really loved the Nintendo 64's "Goldeneye," as I recall.

Tom: "Goldeneye" is kind of like the "Ulysses" of video games. It did everything a video game was capable of doing till that point, and it blasted open all these other avenues of possibility. It was just incredible. And it still boasts the finest two-player kill-each-other mode I've ever seen. The Bond games since then have been pretty fun, but they were no "Goldeneye." Rumor is, EA has hit a "Goldeneye"-like milestone with "Everything or Nothing." I'm moist with anticipation.

Jeff: And I can honestly say I haven't been this excited to see James Bond in action since 1979's "Moonraker."

Jeff: Well, we grew up with him. He's the Bond of our youth.

Tom: I always viewed Roger Moore as a likable version of Ronald Reagan. They both had that gentle brown glow of geopolitical reassurance.

Jeff: This credit sequence is amazing.

Jeff: Only in the world of James Bond can a silhouette of a woman brandishing a crossbow be sexy.

Tom: Man, look at this! We start out with Bond disguised as a mujahedin fighter in Tajikistan! Any game that starts out in Tajikistan -- and pronounces Tajikistan correctly -- is all right by me. Bond goes from Tajikistan to South America to Egypt and back again in this game. That motherfucker must get some serious frequent-flyer benefits.

Jeff: Give EA credit for production values, too. This might be the starriest voice cast ever assembled. It's got bona fide movie stars like Pierce Brosnan, Willem Dafoe, Judi Dench and John Cleese. Also some actors less known for their shall we say vocal skills -- namely, Shannon Elizabeth and Heidi Klum. Notice the care with which the programmers have expertly sculpted their behinds.

Tom: What's the plot, J? I'm calling you "J" in the overriding spirit of James Bond.

Jeff: It seems that Willem Dafoe plays the evil Russian Nikolai Diavelo, who -- and we need to concentrate here -- is trying to take over the world. James Bond, though, is out to stop him. And there's some baloney about nanobots turning the world into gray goo.

Jeff: As far as the acting goes, Brosnan really seems to be phoning it in here. He sounds hung over at best and bored at worst.

Tom: As "M," though, Dame Judi Dench is really giving it her all. That woman is a professional. I wish I had been in the recording studio to hear the various takes of Judi Dench leaning over a microphone to say, "Find a rocket launcher, 007!" Bloody magnificent!

Jeff: Like previous Bond games, the action is pretty strictly structured. You don't roam about in an open-ended world; nor does "Everything or Nothing" have different endings like, say, "True Crime: Streets of L.A." But what you sacrifice in "free will"-type gaming you definitely gain in attention to detail -- the guns all sound really different, for instance -- and in dynamic, jungle-lush graphics. And unlike a lot of pretty games it doesn't skimp on the quality of the gameplay.

Tom: Just when you think they've tapped all the computational power of a given generation of consoles, in this case the Playstation 2, they blow your doors off with something like this. So where are we now?

Jeff: Bond is rappelling down a burning building. I've got to set these bombs and ...

Tom: Wait a second. James Bond's secret code for detonating the bomb is "007"? Jesus Christ, I hope he never loses his ATM card.

Jeff: The great thing about "Everything or Nothing" is how well-done each type of board is. There are driving boards and stealth boards and shoot-'em-up boards -- a little something for everyone, and they're all amazingly fun. And I must say that while I'm not usually crazy about driving games, I'm loving the driving boards here.

Tom: It helps that among Bond's arsenal is an SUV that is equipped with an invisibility cloak and several batteries of rocket launchers. Not the most environmentally friendly vehicle, I assay.

Jeff: His bike's even better. Using James Bond's motorcycle, equipped with flamethrowers and a shotgun, might be my favorite thing in this very great game. When you go really fast the horizon stretches away to the onset of an otherworldly sound, and you hurtle into the oncoming traffic at a dangerous, terrifyingly fun speed. Watch me jump to the other side of this bridge.

Jeff: That's when you find especially stylish and effective ways of solving a puzzle. Presto, a "Bond Moment."

Tom: So when you were sneaking through that room earlier and paused to give that naked Russian woman a backrub, you performed a "Bond Moment"?

Jeff: Exactly. You usually get a "Bond Moment" for jumping things, or shooting barrels full of explosives. I'm happy to report to the uptight, humorless sorts of people who believe nothing useful is being taught by video games that the generous giving of a backrub to a half-naked Russian woman is appropriately rewarded.

Tom: I wish my own life had more "Bond Moments."

Tom: I'm not sure. Literally I suppose it would have to be.

Jeff: There's also this very cool "Bond vision" function, which renders the world in a kind of bluish, Lexus-commercial slow-motion, and gives you the opportunity to scroll through your impressive array of gadgets and weapons. I'll try my remote-controlled, detonating "Q Spider" here. Oh my God!

Tom: It's Jaws! Jaws is in the game! And he's beating the shit out of you.

Jeff: That's it. It's settled. Best Bond video game ever. What's next?

Tom: Honestly? It's that whole "Bond Moment" thing. It's made me intensely resentful. I'm feeling slightly judged, truth be told. "Dig Dug" doesn't judge you. And I've actually been to Tajikistan and seen mujahedin.

Jeff: But you've never given a half-naked Russian lady a backrub.