It's been four long years since Chris Rock took the stage -- and we couldn't need his voice more than we do now. 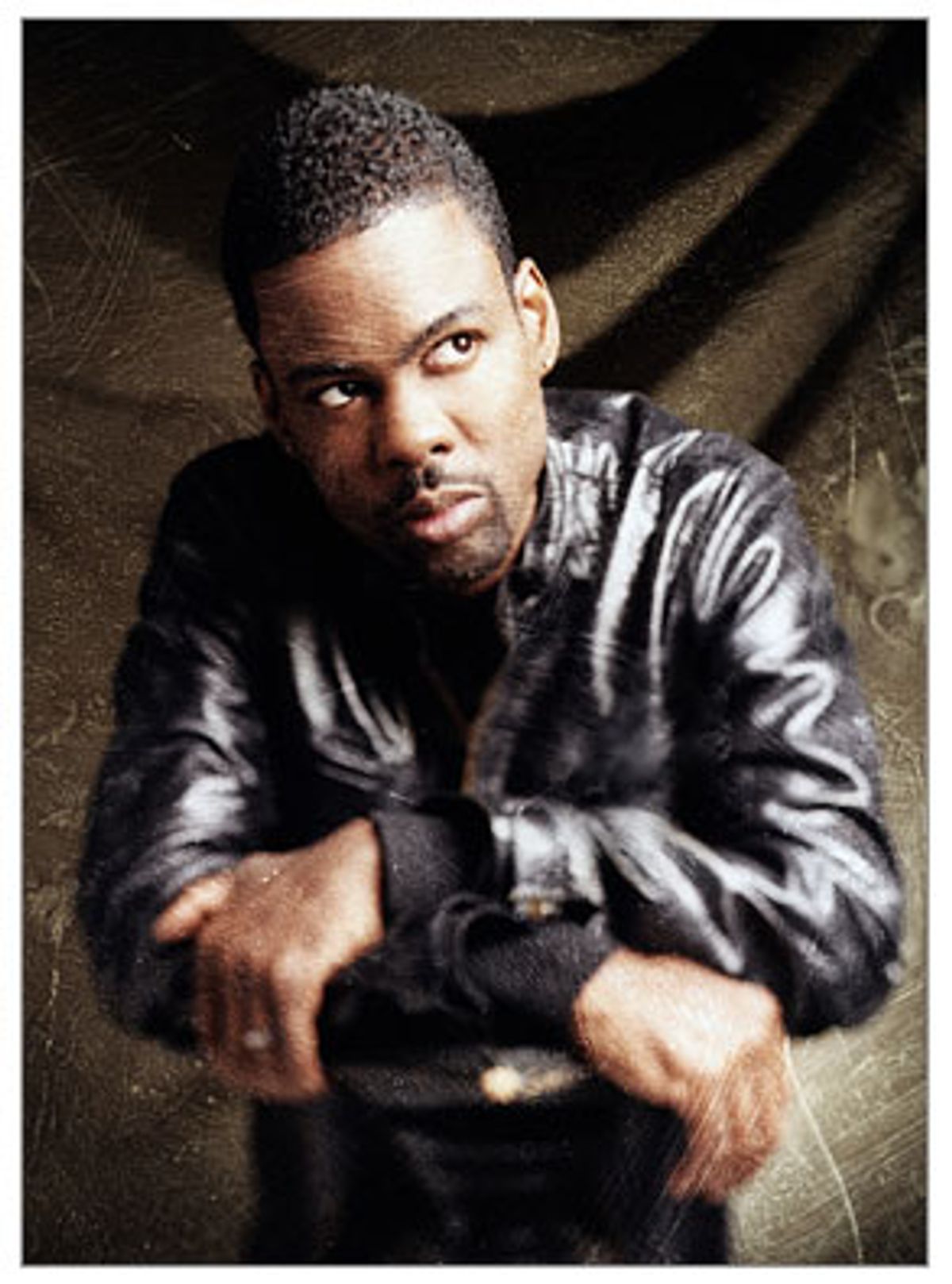 "America is a nation of B and C students."

True to the name of his new HBO special, "Never Scared," Chris Rock is pacing the stage, explaining his take on, of all things, affirmative action.

Chris Rock is back.

And his timing couldn't be better. With an increasingly messy war in Iraq and a contentious election year under way, who better than Rock to slay the sacred dragons roaming around unchecked? He never minces words. He nails every joke. He tackles the stickiest subjects without self-consciousness or self-importance, and delivers his punch lines with the percussive conviction of a master orator. Only Rock can conquer a controversial topic with an insolent remark and a wide-eyed grin, only he can unravel the conventional wisdom on drugs or race relations with one well-chosen metaphor.

Best of all, as outspoken as he is, Rock delights in the absurdity of American life, taking pleasure in underscoring the greed, inequality and hypocrisy he observes. The Candyman of outrage, Rock turns bitterness into rollicking laughter, and takes the subjects that confuse and sadden us the most and spins them into pure entertainment.

No wonder we've missed him. Over the past four years, Chris Rock may have been around -- in movies, on TV -- but nothing compares to seeing him onstage. While his special (10 p.m. ET Saturday, on HBO) features the kind of championship-level stand-up that will make you laugh from start to finish, there's more to Rock's return than just that. His reappearance is a relief, somehow. It's comforting to hear a powerful, painfully blunt voice ringing out over the equivocations and excuses that have dominated the public discourse lately. Entertainment Weekly recently named Rock "the funniest person in America," but the sharpness and brazen honesty of his perspective dictate that his role in American culture goes far beyond that of our most popular comedians.

Like Al Sharpton who, for better or for worse, cut through the political babble during the Democratic presidential candidate debates, announcing that "all of [these candidates] in their worst night's sleep is better than George Bush wide awake at high noon," Chris Rock says what other people won't say.

Most of all, Rock has a sensitive eye for cracks in the cultural pavement -- the little bits of hypocritical reasoning, those gaps in logic that the rest of us treat as a natural part of the scenery.

On the difference between rich and wealthy: "Shaq is rich. The white man who signs his checks is wealthy."

On pharmaceutical ads: "They just keep naming symptoms 'til they get one that you fucking got. They say, 'Are you sad, are you lonely? You got athlete's foot? Are you cold, are you hot?'"

On the government's hatred of rap: "Tupac was gunned down on the Las Vegas strip after a Mike Tyson fight. Now, how many witnesses do you need to see some shit before you arrest somebody? More people saw Tupac get shot than the last episode of 'Seinfeld.'"

Rock says he doesn't have a message, just personal observations he takes from his life and his experiences, and in many ways, it's this lack of self-importance that make his social commentary all the more biting. If Rock did view himself as a public figure with an important message to send, if he took on the responsibility of being a role model, he wouldn't have the freedom that he has now. Dennis Miller may have demonstrated a lot of courage in proclaiming his role as mouthpiece and public informant, but his self-seriousness limits his ability to make us laugh. Similarly, comedians like Bill Maher and Janeane Garofalo can get so weighed down by their view of themselves as public figures that they lose the unselfconsciousness that leads to comic genius. By recklessly taking potshots at anything and everything, Rock has developed into a skilled marksman.

Even so, Rock may be knowingly understating the power of his words to raise the consciousness of millions of Americans. While it's common for the major figures in our counterculture to declare that they're not role models and they don't have an interest in taking a stand politically, the reality is that messages are spread differently today than they were years ago. The delivery systems for information have changed so radically in the past few decades that those who were once considered far from the center of serious political or sociological debate are playing key roles in influencing the public's perception. In a country where 21 percent of young people claim that they get their news from "The Daily Show," the equation for consciousness-raising has clearly shifted. Whether or not he chooses to accept it, Rock's significance as a radical voice in our culture is undeniable.

Rock himself hinted that he has a broad respect for those with the courage to stick their necks out for what they believe when he appeared on "Oprah" last week.

Oprah: "What do you think of 'Passion of the Christ'"?

Chris: "I think it's amazing. You know, art used to be about that. It used to be about 'OK, this is all about me, I'm going to put my money, and put my reputation on the line, and let the chips fall where they may.' I gotta applaud Mel for that."

It's been four years since his last comedy tour, and a lot has happened since, the obvious event being 9/11. And a recent New Yorker magazine profile of "Boondocks" creator Aaron McGruder suggests that he has plenty to say on the subject:

"[McGruder] went out for lunch with his friends Reginald Hudlin, the film director, and Chris Rock, the comedian. Hudlin asked Rock whether, if he still had his own TV show, he would be mining the tragic events for material. 'He was like, "Oh, yeah!"' Hudlin told me. 'He right there on the spot did fifteen minutes on 9/11 that was genius, and just to hear it done as impeccably as Chris did it was inspiring to all of us.'"

Like the most talented and courageous orators and artists of any era, Chris Rock's voice echoes those thoughts and emotions that others will only whisper behind closed doors. Just as Lenny Bruce or George Carlin hinted at the popular perceptions that were only starting to come to the forefront of the public's consciousness, one senses that Rock may be vocalizing the sentiments -- suspicions, fears, and hopes -- of countless Americans -- and influencing countless more.