India's advice to the U.S.: Invest in yourself

Executives at Indian outsourcing companies are aware there's a political backlash in the U.S. against offshored jobs, but they're not too worried: They know that the cold logic of profit is on their side. 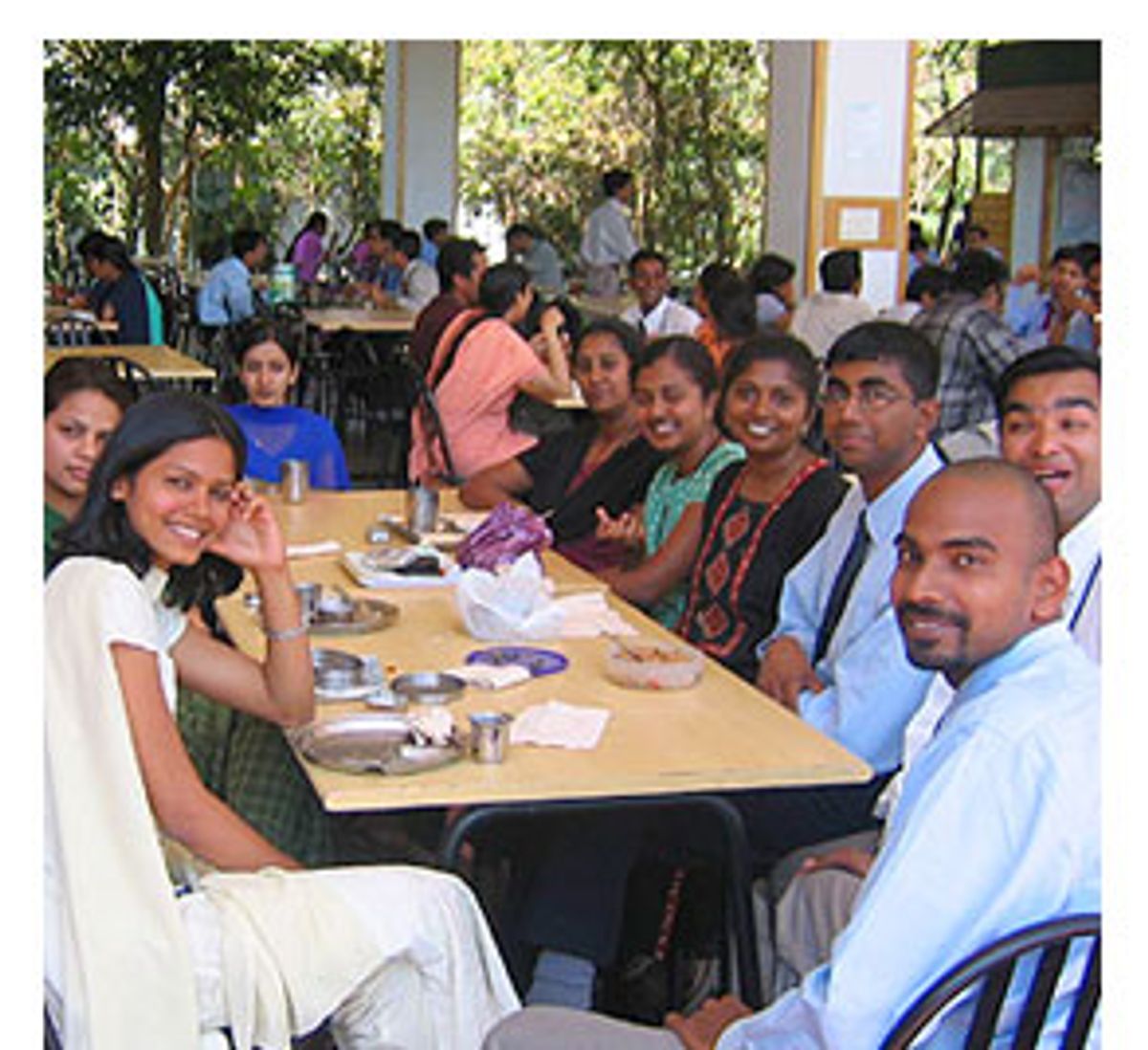 April 19, 2004  |  BANGALORE, India -- Midday, no one is swimming in the pristine pool on the Bangalore campus of Infosys Technologies, India's largest publicly traded high-tech company. There's no one assuming any contorted postures in the yoga studio either, or running on a treadmill in the gym. But a smattering of programmers are getting in a few strokes on the putting greens sprinkled between the dozens of glass-and-chrome office buildings.

The pool, the gym and the offices are all embedded in a landscape of tasteful horticultural opulence. Palm trees and ferns edge neatly clipped green lawns. Manicured flowerbeds overflow with blooming birds of paradise -- the very same orange and purple flowers you'd find decorating the grounds of a Silicon Valley tech giant in Northern California.

The Infosys campus doesn't just mimic the corporate luxury of a giant U.S. software company, it surpasses it, an imposing refutation, denial even, of Third World stereotypes. (In early April, Infosys announced plans to significantly enhance its U.S. presence.) Some 7,000 of the company's 25,000 employees work at this campus, 95 percent of them programmers, average age 26 years old. Their workplace is so sprawling that golf carts ferry executives and visitors from building to building, just like at Microsoft's corporate headquarters in Redmond, Wash. Bicycles are freely available for employees who want to speed up a trip from building No. 1 to building No. 22. The scale of the company's outdoor cafeterias is so big that they look less like office lunchrooms back in the states than like food courts at American amusement parks.

The contrast between the bucolic, sanitized environs of this firm and the landscape outside its guarded gates is so stark that the two could be separated by a moat. On the Infosys campus, there's only one hint of that outside world: A handful of poor women who live near the campus water the company's landscaping, hired as part of the corporation's charitable efforts.

One spacious lawn on campus displays a scattering of small trees, each one neatly labeled with the name of the visiting dignitary who planted it, a roster that includes Tony Blair, Michael Dell and Bill Gates. The fledgling shoots of the young, ceremonial trees send a message to the programmers who work here -- the world's most famous businessmen and politicians are now coming to Bangalore to see what the Indian software industry is up to.

"All of us were brought up thinking that we belong to the Third World, and in all probability we will remain there," says Sunil Mehta, vice president of the National Association of Software and Service Companies in India. But in recent years, the rise of software and other high-tech and telecommunications-related industries has resulted in an exhilarating change of consciousness. "We know if we develop global quality standards and are globally competitive, we know that we can pull ourselves up by the bootstraps and say: 'We belong to the First World.' I think it is really irrelevant whether you are from India, the Philippines, China, Eastern Europe or Africa."

White-collar globalization is no boogeyman in India: Newspapers here like to call the workers at companies like Infosys "the young hopefuls," beacons of modernization in a society where 50 percent of the population is still illiterate. But everyone in the tech industry in India is fully conscious of the political controversy that has erupted over the topic of outsourced and offshored jobs in the United States -- a country that is also, unsurprisingly, the home of many of their biggest clients.

Their message back? These are your rules we are playing by, and you'll find it difficult, or impossible, to change them.

"If you want to be competitive, you have to allow the rest of the world to compete," says Laxman Badiga, chief executive of "talent transformation" at Wipro Technologies, Infosys' only rival in the competition to be the country's biggest outsourcing firm.

The weird logic of globalization has resulted in the oddity that historically socialist India, which only began opening up its economy in the early '90s, is now lecturing the U.S. about the virtues of free trade. Executives here are quick to point out that American firms, such as Texas Instruments and G.E., were the first multinationals to discover that low-cost, high-quality work could be done in India. And as companies like Infosys and Wipro have sprung up to sell Indian labor to the rest of the world, Americans have been their biggest customers: Some 70 percent of Infosys' revenues still come from the U.S., according to Kris Gopalakrishnan, the chief operating officer and one of the company's co-founders. Sixty percent of Wipro's clients are in the U.S., says Badiga.

The rise of the industry has helped seed the aspirations of a growing middle class. "There is a new generation of young people who are reinventing the social fabric of India," says Tina George, a spokesperson for Infosys, herself just 30 years old. Preshant, a 27-year-old programmer eating a Domino's pizza at one of Infosys' corporate cafeterias, sums up the changes in his country this way: "It would have been a dream to own a car in the past. Now it is a need." He drives a Honda motorcycle.

In just a decade, the Indian middle class has ballooned from about 100 million to 300 million, according to Gopalakrishnan. And while his industry represents a small part of the overall Indian economy, with about $12 billion in annual revenues, it's still the fastest growing sector, jumping by more than 20 percent a year.

The social changes wrought by that new middle class comes with its own anxieties. The February 2004 issue of India's Cosmopolitan magazine warns of a sinister plague of "DINS" -- "dual income, no sex syndrome" -- afflicting software professionals, complete with supporting data from a fertility expert declaring that 18 percent of women and 26.78 percent of men in I.T. (information technology) suffer from low libidos. Similar inflammatory articles decrying the allegedly high divorce and suicide rate among programmers in Bangalore appear on the front pages of the New Indian Express.

In the wake of Bangalore's rapid growth companies have put pressure on the local government, resulting in a cleanup of litter on the streets, and the draining and restocking of fetid lakes -- a potent symbol of wealth trickling down. But the growth has also inspired rapid gentrification that has made real estate prices skyrocket, prompting some to wonder who is really benefiting from all this new wealth.

In this context, the political backlash against outsourcing in the United States is met with a mix of concern and incredulity.

Abhinar, 28, an engineer who has worked at Infosys for three and a half years, sees the "noise" about outsourcing in the U.S. as "election propaganda. That's it." He doubts any broad protectionist measures will be enacted stateside.

Wipro's Badiga sounds more confident than many U.S. software programmers are in their ability to retool their careers. He expresses confidence that U.S. programmers who lose their jobs to outsourcing will find new work: "I.T. is a high-skilled labor. There is not much issue for them to have another job. Because they are educated they will always find jobs." But when manufacturing jobs went offshore, "The blue-collar worker became the call-center worker. Now, where does he go, because he's not highly educated?" He suggests that the U.S. government should invest in retraining such workers, as it did when manufacturing workers lost their jobs.

NASSCOM's Mehta echoes Badiga's sentiment, suggesting that Americans should remember their strengths: "What the U.S. has been able to do very well all these years is reinvent itself. The U.S. has always remained at the forefront of innovation whether it's I.T. or nanotechnology. I really think that within the U.S. the question is: 'OK, how do we invest in ourselves, so we can continue to lead from the front?'"

Gopalakrishnan believes that it is up to U.S. companies and politicians to answer the following question: "What is the right balance between business efficiency, effectiveness, competitiveness and employment? It's difficult." But he suggests that the mood now seems to demand more retraining and support for those losing jobs.

During the global economic downturn in 2001 and 2002, Infosys had 2,000 employees "on bench" when there wasn't enough client work to go around. They didn't have layoffs, like so many huge U.S. companies; instead, the company "used that time to retrain them on newer technologies." But Gopalakrishnan stresses that it's the lower labor costs in India that allowed Infosys to take that approach: "That's the economics of the model. We can absorb that cost. We can retrain."

Still, some outsourcing businesses here have already felt the financial pinch of the U.S. backlash as their clients hesitate to sign new contracts, while they wait to see what the politicians do in Washington. "I would say my customers are waiting. They don't want to take a chance, at least until the election is over," says Dinesh Dalamal, who runs ISN Data Processing, an offshoring facility that does check processing in Pune. Dalamal says his U.S. clients fear "a tax on their savings." Dalamal thinks that the probability of that happening is "quite low" and such a tax would "just make a small dent in the whole thing," but the perception of the threat is real.

But no one here seems really frightened that they are about to lose their businesses over the controversy. The cold logic of a good deal works in their favor. One Indian software executive, who is employed by a multinational U.S. company with offices in Bangalore (a company that forbids employees from commenting on the record to the press on the topic of outsourcing), used an anecdote to explain why he's not really worried about the U.S. government attempting to rein in the flood of jobs going overseas.

In the early '90s, an exposé about the underbelly of the Indian software industry appeared on a respected U.S. news program. It documented the hardships of programmers brought to the U.S. on H-1B visas. Indian programmers appeared with their faces blacked out, and were quoted lamenting that their passports were being held by rogue bosses who forced them to live six to an apartment, while paying them $1,500 for work their predecessors had been paid $5,000 for. "It was very negative," the executive remembers.

Back in India, industry officials fretted about the fallout from the P.R. debacle. Should they hire lobbyists in the U.S. to plead their case in Washington? Would customers be scared away? But three months later, they found that the reaction from viewers in the U.S. was exactly the opposite of what they'd anticipated. The exposé turned out to be an advertisement.

"Suddenly, Mr. Joe sitting in Wisconsin who thought Indians were going around on elephants knew that Indians could write programs. He thought, These Indians can write programs for $1,500 that cost me $5,000? I can't believe this. I have to check this out. He didn't care that they shared an apartment." Three months after the story appeared, the software association was flooded with inquiries: "'Hey, I want to work with you? How can I do it?'"

"Americans will go for value where they see it," says the executive. "They don't care about race, religion, political affiliation. They don't care what color of shirt I wear as long as I can get them something at the highest quality at X minus what it is costing them."