Early on, "13 Going on 30" raises hopes that its message will be "It's great to be different." So why does it dash those hopes so cruelly? 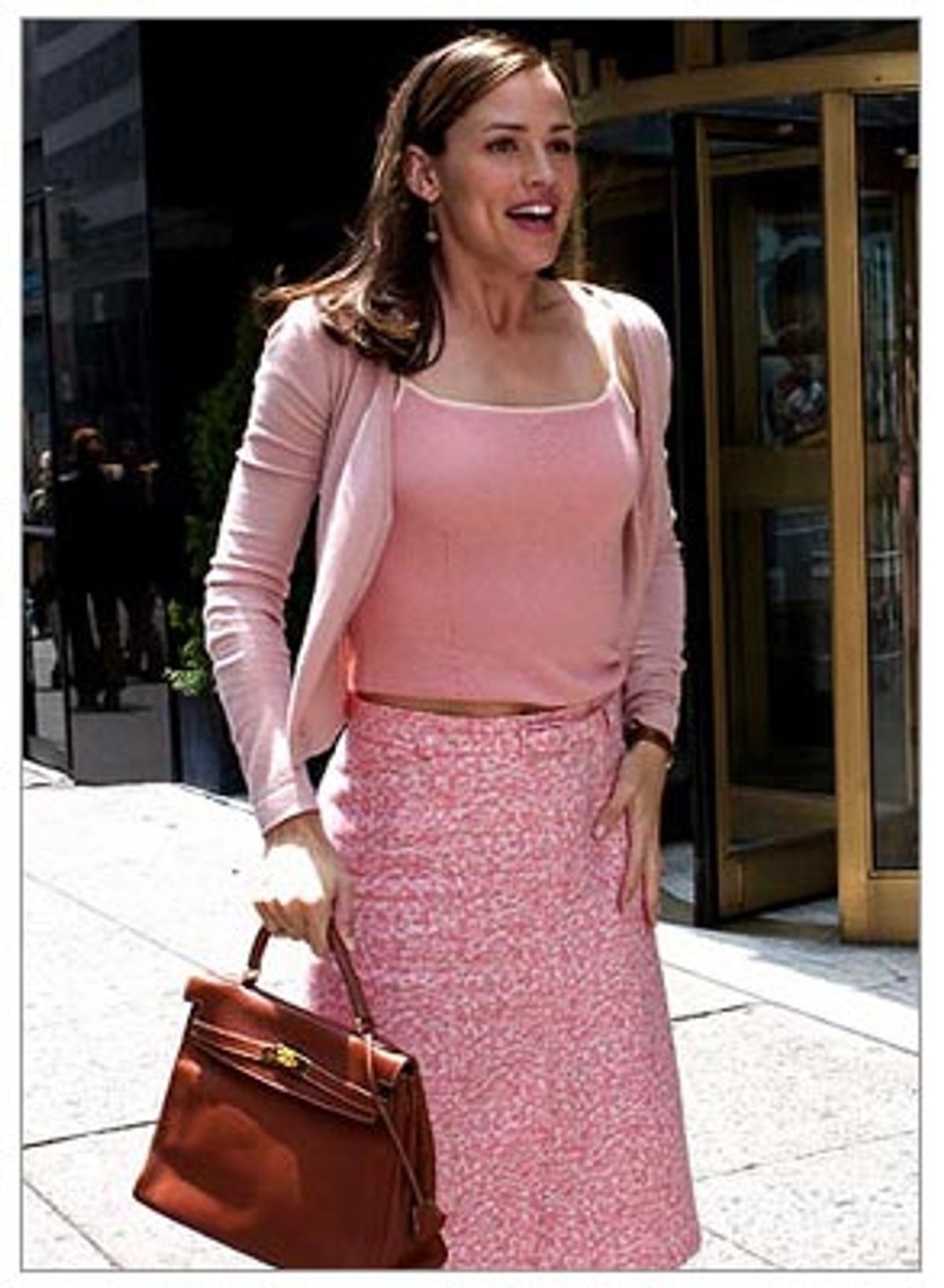 In Gary Winick's "13 Going on 30" the lovely, coltishly awkward 13-year-old Jenna Rink gazes from afar at the snotty, popular girls in her class and whines, "I don't wanna be original; I wanna be cool."

The line resonates, because at 13, the age when kids long, paradoxically, both to fit in and to set themselves apart, it's so hard to see that to be original is to be cool. And particularly because it shows up so early in a picture that's clearly a polished, mainstream product, that line is an exciting promise: We all expect indie movies to be challenging (whether they are or not is another story). But a Hollywood movie that flirts with unconventional ideas -- in other words, one that recognizes that to be original is to be cool -- is even more enticing.

When Jenna's friend and fellow misfit Matt shows up for her birthday party and starts dancing, spasmodically, blissfully, and very, very embarrassingly, to Talking Heads' "Burning Down the House," it seems like a promise that "13 Going on 30" will be the movie that every former and current square peg hopes to see: One that doesn't say just, "It's OK to be different," but "It's great to be different."

As 13-year-olds used to say, but probably don't anymore: Fat chance. And that's a major disappointment, considering that at least three-quarters of "13 Going on 30" shows both a witty intelligence and lightness of touch that's all too rare in mainstream comedies these days. Winick (director of the coming-of-age indie "Tadpole"), working with a script by Josh Goldsmith and Cathy Yuspa ("What Women Want"), makes even the movie's most conventional comic scenes feel fresh. I was so charmed by the opening scenes of "13 Going on 30," and so entertained by the middle portion of it, that I had high hopes for its ending -- hopes that were cruelly dashed. Like a petulant 13-year-old, I'm still pouting over my disappointment.

"13 Going on 30" opens in 1987. Young Jenna (she's played by Christa B. Allen, with an intensely believable sense of openness and vulnerability) wants nothing more than to be accepted by the cool girls at school, even if that means rejecting her best friend, Matt Flamhaff, a genuine outsider and clearly a smart, interesting kid (played astutely by Jack Salvatore Jr., a perfect counterpart to Allen). The movie drops heavy clues that he's the kid who's into all the great music early on; Jenna's tastes lean more toward heartthrob Rick Springfield, but you get the idea he could turn her around by playing "Oliver's Army" just once.

The cool girls play a cruel trick on Jenna, but it's one that hurts Matt even more, and Winick handles this section so beautifully that the characters' pain seems to hang in the air like a heavy mist. (I could feel the audience around me tense up collectively.) Matt has given Jenna an incredibly personal, handmade birthday present, which she seems only vaguely interested in; he has also given her some wishing dust, and in her deeply unhappy state, she uses it to wish herself into adulthood.

The 30-year-old Jenna (Jennifer Garner, of "Alias") is an extremely successful professional -- she's the powerful editor of "Poise," the magazine adored by the 13-year-old Jenna -- with an enviably mod Manhattan apartment and a studly-handsome New York Ranger for a boyfriend. What Jenna doesn't yet know is that to get to where she is today, she has been, to use a term that hadn't yet been invented in 1987, a biatch. One of the cool girls circa 1987, Lucy (Judy Greer, whose performance has the sugary sharpness of a SweeTart), is now her best friend and colleague at the magazine. Apparently, they've both climbed the ladder by stomping on the fingers of everyone around them.

But Jenna doesn't realize that: As a 13-year-old suddenly poured into 30-year-old's body, a naif plunked down in an unfamiliar universe, she's friendly and eager to fit in, and the people around her, especially Lucy, can't figure out what's wrong with her. As the grown-up Jenna, Garner isn't as brilliantly funny as Jamie Lee Curtis was in "Freaky Friday." But her timing has a pleasing loopiness, and she goes just far enough with the puzzled-innocence routine: When she's confronted with a problem she can't wrap her brain around (such as why her sexy boyfriend wants to show her his "thing"), she squeals or furrows her brow just as a 13-year-old would.

Garner also has fun with the physicality the performance demands: Her walk is a young teenager's slightly bowlegged gait, and her rump sticks out like a twitchy bubble -- she hasn't yet learned the grown-up, womanly art of tucking it in. It doesn't hurt that the first outfit we see her in consists of a tiny magenta silk nightie, silver high-heeled shoes, and a sparkly purse -- and this is a work outfit. The outlandish getup is a nod to the way our teenage selves couldn't wait to escape our parents' supervision and wear whatever we please. (This is before we have to reckon with one of the great disappointments of adulthood: That there are very few occasions for truly fabulous outfits.)

"13 Going on 30" is filled with giddy time-warp jokes that work almost in spite of themselves: Grown-up Jenna has missed all the pop-culture developments of the past 17 years and doesn't know, for example, who Eminem is. When a frantic assistant informs her he's on the phone and he wants a decision immediately, she sputters, "Plain! No, peanut!" Then she walks into her office for the first time and sees an array of autographed mementos on the wall, including a "True Blue"-era portrait of Madonna that's been lovingly inscribed to her. "I'm friends with Madonna?" she marvels to herself, half under her breath, amazed by this fabulous life she has lucked into.

But as we know, and as she'll soon learn, it's not nearly as fabulous as it looks. Backstabbing is the order of the day at big magazines, and even just dealing with a demanding boss can be enough of a challenge. (In this case, that boss is the wonderful, champagne-crisp Andy Serkis, looking very un-Gollumlike with his devilishly manicured beard.) But Jenna's biggest problem is that she has sought out her childhood friend Matt (he's now played by Mark Ruffalo, who uses his shambling charm to great effect here -- he's like a PJ-clad kid who's just woken up), from whom, in this alternate life, she has been estranged for years.

Matt is a professional photographer who lives in the West Village. When Jenna tracks him down at his apartment, he answers the door in a CBGB's T-shirt, and he has a poster for "Blue Velvet" hanging on his wall. We can see that in the 17 years Jenna has been wheeling, dealing and conniving, Matt has been checking out the world around him. He's been open to it in a way that Jenna has not. He may not have a lot of money, but you get the sense that he's lived his life with some passion for his surroundings.

Jenna realizes how much she cares for Matt, but because his life has taken such a different route from hers, it may be too late to do anything about that. And this is where the movie's problems begin. The message of "13 Going on 30" is that it's all too easy to take a wrong turn in life, to lose sight of what really matters. And the movie loses all its sharpness and discretion as it leads us toward that revelation. It starts out thinking sharply and ends up in a fuzzy dream state about how important it is to be nice above everything else.

The ending of "13 Going on 30" was even more predictable than I feared it would be, but if you want to preserve the illusion that you don't already know how everything ties together, read no further. (In other words, spoilers ahead.) "13 Going on 30" starts out taking pleasure in the fact that as awkward as we are as 13-year-olds, that spiritual gawkiness is often precisely the thing that allows us to flower into interesting, astute, compassionate adults. But the movie's end hammers home the message that if you want to be a "nice" person, conventionality is the only true path.

Jenna, who learns from the mistakes she made in her wished-for life, gets to turn back the clock and redo everything. Dressed in a fairytale white gown, she marries Matt, and the two get ready to move into a pretty, pinkish-toned suburban house. The movie doesn't tell us what career choice Jenna makes -- in fact, it doesn't suggest she has a career at all, because apparently, the path to true happiness is not to even think about working. In this redesigned version of Jenna's life, wouldn't it have been more revolutionary for her to get that big editor's job by being honest, straightforward and by treating people around her well, instead of stepping all over them? But the movie doesn't have the guts, or the brains, to take that step.

The ending of "13 Going on 30" bodes pretty well for Jenna, if she's more interested in being a nice person than she is in being original. Matt is the one we have to worry about. Is he ever going to wake up and realize that, in taking that happy-go-lucky path toward unadulterated niceness, he missed a lot of great and complicated art -- not to mention some great and complicated life experiences? Will he ever wake up and ask, Is this my beautiful house? Is this my beautiful wife? Most important of all, does this version of Matt get to see and fall in love with "Blue Velvet"? And if so, is there a room in that beautiful house for him to hang it? "13 Going on 30" not only fails to answer those questions. It doesn't want us to even ask them.