Everyone is an editor

In the wacky wiki world, a Web browser is all you need to start contributing. But when the goal is to create an encyclopedia, such democracy has some pitfalls. 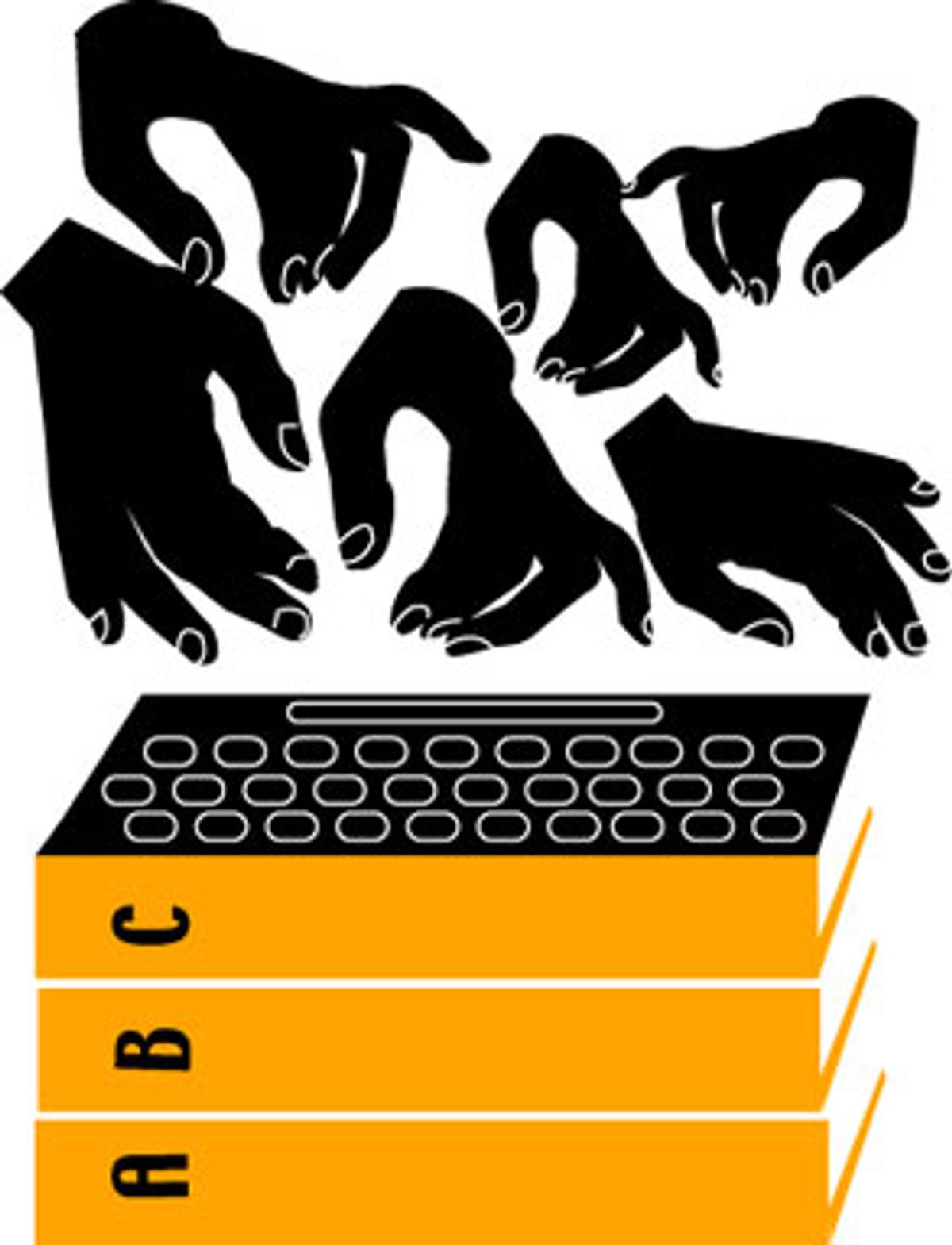 Like most frontier sheriffs, Wikipedia Arbitration Committee member Martin Harper wears his badge with a mixture of pride and caution.

A 24-year-old software engineer from Worcester, England, Harper knows what it's like to be new. It was only two years ago, after all, that Harper, an immigrant fresh in from the Douglas Adams "Hitchhiker's Guide to the Galaxy" online encyclopedia project, H2G2, encountered the scary freedom of wiki publishing -- where pretty much anyone can add his or her own thoughts to a Web site, even if that means overwriting or "correcting" what someone has already written.

Today, Harper is one of a select few working to impose a civilized order on what has become one of the Internet's fastest growing boomtowns. Launched in January 2001 with barely a dozen articles, Wikipedia crossed the 500,000 articles mark in February, with posters contributing content in more than 30 languages and, by last measure, at a rate of 300,000 articles per year.

Needless to say, so much activity generates plenty of controversy and plenty of work for Harper and the nine other members of the Arbitration Committee. Whether that means throwing cold water on recurring editorial battles over Israel and Iraq or deciding whether a ban on offensive user names such as "Mr. Throbbing Monster Cock," the disputes can vary from the mundane to the humorous to the truly informative all within the space of a single day.

"The hardest problems are always at the lowest level," he says. "People being rude, people refusing to compromise. We have a guy whose skill is copy editing. However, unlike most copy editors, he's quite stubborn and adamant about what's proper for articles. He won't budge and people have been complaining. After far too much discussion amongst the community, it was referred to us the second time. We're trying to ease it. We can't get rid of it."

Such problems, Harper notes, are common to any site that embraces the wiki model. First coined in the mid-1990s by Portland, Ore., programmer Ward Cunningham, "wiki" is the technical name for a site that lets readers edit the published content in real time. Borrowed from a Hawaiian term for "very fast" (wiki wiki), the term dates back to Cunningham's Wiki Wiki Web, an experimental offshoot of the Portland Pattern Repository that first offered readers an "edit this page" link in 1995.

"It was something that needed to exist," says Cunningham, recalling his decision to invite a few dozen fellow programmers to test out the wiki feedback model. "I thought if [WikiWikiWeb] lasted six months, it would still be worth it.

Nine years later, the wiki model is flourishing, mostly in venues where publishers put a value on feedback and informational utility. The Apache Ant Project, for example, uses wikis to make sure readers can correct or improve user guides related to the open-source Apache Web server. Even Microsoft, a company for which Cunningham now works, has gotten in on the act, embedding a wiki page within its recently unveiled Channel 9 external weblog.

Of all the variants out there, however, few have attracted as much attention as Wikipedia. Originally a free-range alternative to Nupedia, a commercial online encyclopedia project of the late 1990s, the project has since become the world's largest wiki with more than 1,200 regular contributors posting and revising content in more than 30 languages.

Jimmy Wales, co-founder of both Nupedia and the Wikipedia project, credits "The Cathedral and the Bazaar," Eric Raymond's online essay on the merits of decentralized software design, for prompting the experiment. Like Cunningham before him, Wales says he saw his venture into wiki as a temporary thing, an experiment that needed to be tried if only to satisfy his own "what if?" curiosity.

"Nupedia was very top down," says Wales. "We recruited academics to write the articles. We had a peer review board. After nearly two years of work and an enormous amount of money, I think we had 12 articles to show for it. Wikipedia was totally different. With the wiki software, bam, things just took off. It very quickly became the project."

Inviting the community to participate in such a project has its risks, of course. Thanks to developments outside the Wikipedia community, the project has seen its media profile surge in recent weeks. The episode started when anti-Semitic Internet users pulled off the agitprop technique known as "Google-bombing" -- repeatedly linking the word "Jew" on Web pages to the Web site JewWatch.com, a site that bills itself as "Keeping a Close Watch on Jewish Communities & Organizations Worldwide." When the tactic propelled JewWatch to the top of Google search rankings, outraged bloggers, led by the site Remove JewWatch.com, responded by linking the word "Jew" to the Wikipedia entry.

The resulting flood of visitors has been both a positive and a negative. Izak, a pseudonymous Wikipedia contributor on topics related to Jewish history, has more than once seen 5,000 words of his editorial work replaced by a single one-paragraph anti-Semitic screed.

"Every few days somebody comes in and vandalizes the site," he says. "So many people are watching the page, though, that it doesn't take long before some admin comes in to fix the page."

As one of those admins, Harper describes Wikipedia's vandalism policy as fairly easy to enforce. Most vandals get a two-strikes allowance. On the third offense, administrators block the offending poster's I.P. address, preventing them from accessing the site. Though some find a new way back in, taunting the admins as they do so, most casual vandals get bored and find other places to ply their hatred.

Wales, who inaugurated this "three strikes" policy during the days when his role as Wikipedia's co-creator put him in the self-described role of "god king," sees it as a cornerstone of the site's overall "soft security" policy. The policy is, in many ways, a Darwinian response to the pressures that undermine most open Internet communities. Instead of courting controversy, Wikipedia's culture has evolved an almost religious aversion to it.

"We talk about 'wiki love,'" says Wales. "We say, hey, if you think this is Usenet and you're supposed to flame people you're really out of line. We really don't approve of that as a community."

A key tenet of "wiki love" is a devotion to NPOV, Wikipedian for "neutral point of view." Articles don't have to be perfect, but they should be free of bias. As an example, Wales cites the 2000 U.S. presidential election. "Two people who disagree vehemently about whether or not it was a fair outcome can at least agree with the description that there was a controversy."

All wikis run the risk of vandalism. Not all wikis have been bold enough to adapt a neutral content policy. Such distinctions, notes Sunir Shah, a University of Toronto computer scientist who contributes to both Wikipedia and his own wiki project, MeatballWiki, make Wikipedia something of a rogue variant in the wiki world.

"They're not interested in having discussions and learning in a dialectic kind of way," argues Shah. "Their goal is to build an encyclopedia, and that changes everything. They don't want to have opinions and they want everything to look appropriate, which means they have to spend a lot of extra time going after vandalism and trolling."

Offering MeatballWiki as a counterexample, Shah says most traditional wikis evolve along the lines of a dialectic or Talmudic discussion. Readers respond to but rarely overwrite previous' authors comments, leaving room for future readers to follow the conversational evolution. In such a scenario, opinion is more than valued: It's practically necessary to keep the conversation moving.

"At MeatballWiki we are kind of happy dealing with the social problems," Shah says. "We have this saying that Meatball will be around in 50 years, so why worry. We can come to a better answer over time."

Harper, who also contributes to MeatballWiki, shares the rogue variant view. Because of its encyclopedic ambitions, Wikipedia has had to adopt new levels of management and security -- log-in names, I.P. address blocks, arbitration and deletion committees -- that most wikis never have to worry about.

"If anything I would say the wiki is more suited to those smaller-scale projects, he says. "As wikis get larger you run into the problem of troublesome users. You can't manage it like the small group where you say, 'We're not going to invite you down to the pub anymore.'"

Wales, on the other hand, sees that level of familiarity operating at the editorial level, where most people who groom the site and have taken on voluntary management tasks have been around long enough to know the major players. Like other scalable open development projects, Linux most notably, Wikipedia has succeeded in passing on its internal cultural values to newcomers encouraged by the project's overall ambitions. To further fuel that ambition and underwrite costs, Wales says he is already talking with some of the larger search engine players about licensing specific portions of the Wikipedia knowledge base and is talking with a publisher about putting out an official 1.0 version.

A few kinks have to be worked out between now and then, of course. With no formal Q-and-A mechanism, Wikipedia would have to ship its 1.0 version free of guarantees. Readers hoping to catch up on the history of World War I might stumble onto a porn star biography or vice versa. Supposing project leaders did take the time to download and vet Wikipedia content, releasing it on a static format such as CD-ROM, a new question emerges: Is a static version of Wikipedia still Wikipedia? In the Schrodinger's cat paradox of wiki publishing -- where the only way to verify an article's quality is to keep checking it -- never knowing what you're going to find is half the fun.

Despite such complicating factors, Wales is optimistic. A fundraising campaign on the project's third anniversary drew $50,000, more than double the $20,000 target, and Wales says he is currently saving the reserve funds for servers and other future project needs.

"From the beginning, we've never known how it was going to scale," he says, acknowledging the doubts. "There was always that concern as to, if things got too much bigger, would it all just degenerate into garbage?"

Three years later, the concerns are still there. The only difference, of course, is that 1,200 people instead of a dozen people now have a stake in seeing Wikipedia succeed. Reflecting on the project's continued growth, Wales laughs.

"I can't believe that it works, but it works," he says.