An article in the Atlantic rashly speculates that Fidel Castro was behind the assassination of JFK -- and ignores the allegations that the Mafia, the military and the CIA were involved. 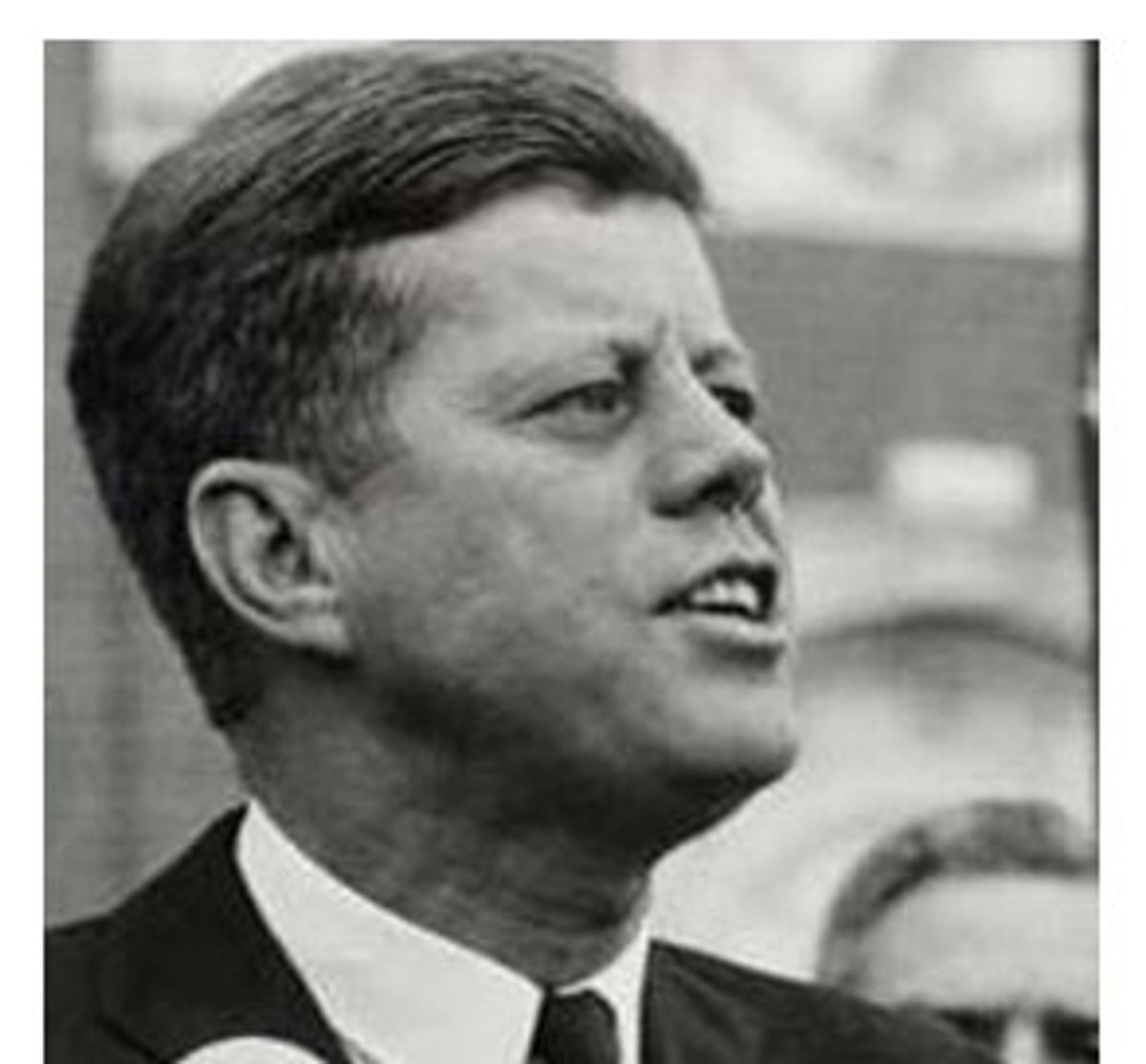 The case of the assassination of John F. Kennedy is complicated, and it is unwise to go gaga over every bit of new information, taken in isolation. That is what the History Channel did in its reckless and now withdrawn feature accusing Lyndon Johnson of having authored the plot. And it is unfortunately also what Max Holland does in the Atlantic's June issue in reporting on the release of Johnson's 1967 telephone conversations related to the killing.

Holland focuses on a conversation held March 2, 1967, in which Texas Gov. John Connally alerted Johnson to information supposedly coming from the investigation then underway in New Orleans by district attorney Jim Garrison. Connally relates the claim "that Garrison has information that would prove that there were four assassination [teams] ... assassins in the United States, sent here by [Fidel] Castro, or Castro's people. [Sent] not by Castro himself, but by one of his lieutenants ... One of the teams was composed of Lee Harvey Oswald, this fella [Clay Shaw] that has just been arrested in New Orleans yesterday, and the [deceased] man [David] Ferrie, plus one other man. They were teams of four. And there were two other teams I know nothing about."

What does Holland make of this? He begins with a kernel of truth: Castro surely had learned of CIA plots to assassinate him and overthrow his government. As Holland writes, these efforts began under President Eisenhower and continued into 1963 (when, as Holland does not relate, the Justice Department under Robert F. Kennedy made an effort to shut some of them down).

Second, Holland ties Bobby Kennedy into the Castro assassination plots, as others have done, in one of the most curious passages in his article:

"It is not known whether Johnson asked [Richard] Helms under whose direction the CIA had acted. If he did, Helms presumably said that Robert Kennedy 'personally managed the operation on the assassination of Castro.' (This is taken from what Helms told Secretary of State Henry Kissinger in 1975, after allegations of CIA wrongdoing began to surface in the press.) Then again, Johnson may not have bothered to ask. Edward Morgan had already told Drew Pearson about the former Attorney General's central role; it was common knowledge within the administration."

In this passage, conjecture is piled on conjecture. The effect is to bring forward a statement made by Helms in 1975, when Bobby Kennedy had been safely dead for seven years, to 1967, when he was still alive. If Helms had made such a claim in 1967, of course, LBJ could presumably have called Kennedy for his side of the story.

There is no doubt that RFK was involved in the JFK-era operations against Castro. But the details matter. What role exactly did he play, and what were his underlying motives? The testimony of others on this point -- whether they were loyalists or those seeking to shift the blame -- is inevitably suspect. In 1967 Connally surely understood the political usefulness of damaging Sen. Kennedy, who was then emerging as a critic of LBJ on Vietnam. And Helms had been deputy director for operations at the CIA in 1963. What could be more convenient, in 1975, than to let it be known that he had been taking orders back then from a man long since deceased?

So the truth frankly eludes us. But for the purposes of his story, Holland needs RFK to have been the aggressive, hands-on architect of the Castro assassination plots. (And he needs Castro to have known it too, though how this could have happened is not explained.) So he gives us RFK in that light -- even though we know that the plots had their origins much earlier, in a circle close to Vice President Nixon and CIA Director Allen Dulles during the Eisenhower years.

Next, is there is any actual evidence linking Castro to the murder of President Kennedy? The question is important, not least because Castro remains president of Cuba today. There is no statute of limitations on murder. If evidence exists, a grand jury could be impaneled and Castro could be indicted for murder even now.

That brings us to the figure of Lee Harvey Oswald. For Holland, Oswald was the unquestioned sole triggerman in Dallas. But as to Oswald's connections and motives, Holland provides yet another claim backed by no evidence at all:

"Knowing the President's conspiratorial turn of mind, Helms probably hastened to reassure Johnson that the CIA, the FBI and the Warren Commission had all looked long and hard for a connection between Oswald and Cuba but come up empty-handed."

Of this statement, we know four things. First, it is purely speculative; we don't know that Helms said anything of the kind to Johnson, much less that he "hastened" to do so. We don't know that Helms tried to speak for the FBI -- whose work Johnson had direct access to through his close relationship with Director J. Edgar Hoover. Hoover did not exactly confide in the CIA. So it would have been very strange, under those conditions, for Helms to try to speak for Hoover.

Second, we know that there were many bits of evidence that seemed to connect Oswald to Castro's Cuba. For instance, Oswald portrayed himself as a Marxist. In addition, he passed out pamphlets for the Fair Play for Cuba Committee in New Orleans in 1963 and was filmed in a scuffle with anti-Castro activists. We know that he traveled to Mexico City in September 1963 and apparently sought a visa to go to the Soviet Union and to Cuba -- without success.

Third, we know that Oswald's pro-Cuba posturing was staged. The Fair Play for Cuba Committee existed, but it had no chapter in the South. In New Orleans, Oswald worked from the offices of Guy Bannister, an ex-FBI man with strong anti-Castro connections. And as for the trip to Mexico City, Johnson knew by midmorning on Nov. 23, 1963, that a photo and tape purporting falsely to capture Oswald's activities in Mexico had already been passed to the FBI -- from the CIA. As Michael Beschloss reported in "Taking Charge," Hoover told LBJ: "No, that's one angle that's very confusing, for this reason -- we have up here the tape and the photograph of the man who was at the Soviet embassy, using Oswald's name. That picture and the tape do not correspond to this man's voice, nor to his appearance. In other words, it appears that there is a second person who was at the Soviet embassy down there."

Most important, we know that Johnson was convinced very early on that Castro was not involved in Kennedy's murder -- and that Soviet Premier Nikita Khrushchev wasn't either. LBJ's phone call of Nov. 29, 1963, to Sen. Richard Russell of Georgia, appointing Russell to the Warren Commission, makes this clear. Indeed, Johnson ordered the commission to find both men not guilty. Johnson's words to Russell, as reported by Beschloss:

"And this is a question that has a good many more ramifications than on the surface. And we've got to take this out of the arena where they're testifying that Khrushchev and Castro did this and did that and kicking us into a war that can kill forty million Americans in an hour. And you would put your uniform on in a minute ... You've never turned your country down. This is not me. This is your country ... You're my man on that commission and you're going to do it!"

Presidential orders rarely get more explicit. The claim that Castro may have been involved in JFK's assassination was squelched. It only began to resurface in 1967, and there is considerable evidence that the man who brought it back was not Johnson but Helms.

Holland's own transcripts make clear that in 1967 Johnson still dismissed the tale of a Castro plot. But Holland glosses over this. Nor does he mention that we now also have the Cubans' side of the story. Their conclusion, based on the state security archives and reported in detail by journalist Claudia Furiati in the book "ZR Rifle: The Plot to Kill Kennedy and Castro," points the finger, interestingly enough, at Helms. My point? Merely that Helms had his reasons for pointing a finger at Castro.

As it happens, I share Holland's admiration of Lyndon Johnson. And when he writes that "the President was utterly convinced that something other than Oswald was behind Kennedy's assassination, and that something involved Cuba," I think he is correct. But what was the "something"? Was it a plot by Castro, who never had any link whatsoever to Oswald or to anyone else ever suggested as a triggerman at Dallas?

What about that grand jury? Isn't it curious -- or perhaps telling -- that not even the leadership of the Cuban exile community has ever pressed for exactly such a thing?

In trying to explain Johnson's motives for covering up a Castro plot, Holland evokes Johnson's loyalty to President Kennedy. He writes, "If the CIA's attempts to assassinate Castro had been known more or less contemporaneously with JFK's assassination, the Kennedy mystique would have been punctured." And so Johnson fell on his sword in 1968 partly to protect Bobby from questions about his activities that might have cast aspersions on his dead brother -- questions that in Johnson's conspiratorial mind had led to a revenge killing by a communist leader, who for unstated reasons Johnson also wanted to protect. And this even after Bobby's desertion from Johnson's cause? Even when Johnson might have found ways -- as he surely knew how to do -- to raise those questions while disguising his own role as their source?

The reasoning is tortured. It implies, among other things, that JFK may have been morally responsible for his own death -- or at least that his successor thought so. The tale is implausible. And it rests entirely on a chain of surmises. There is, in fact, no evidence for it at all.

It is extremely curious that the standards of history and evidence relating to the Kennedy assassination have sunk to the point where the History Channel can broadcast a scurrilous documentary implicating Johnson, while the Atlantic chooses to publish an account that leaves, at the very least, the heavy hint that Castro was involved.

Meanwhile, the many books that point to elements within the Mafia, the military and the CIA -- as indeed the conclusions of Cuban state security do -- remain beyond the pale. Strangely, they are not subject to review in the culture's polite journals. They are taboo. So far as Max Holland and the Atlantic are concerned, they do not appear to exist.

If I were a conspiracy theorist, I'd say that was a sign of a troubled conscience.