Marketers held a conference to find out what women do online. The answer: everything except the one crucial thing -- look for cleaning products. 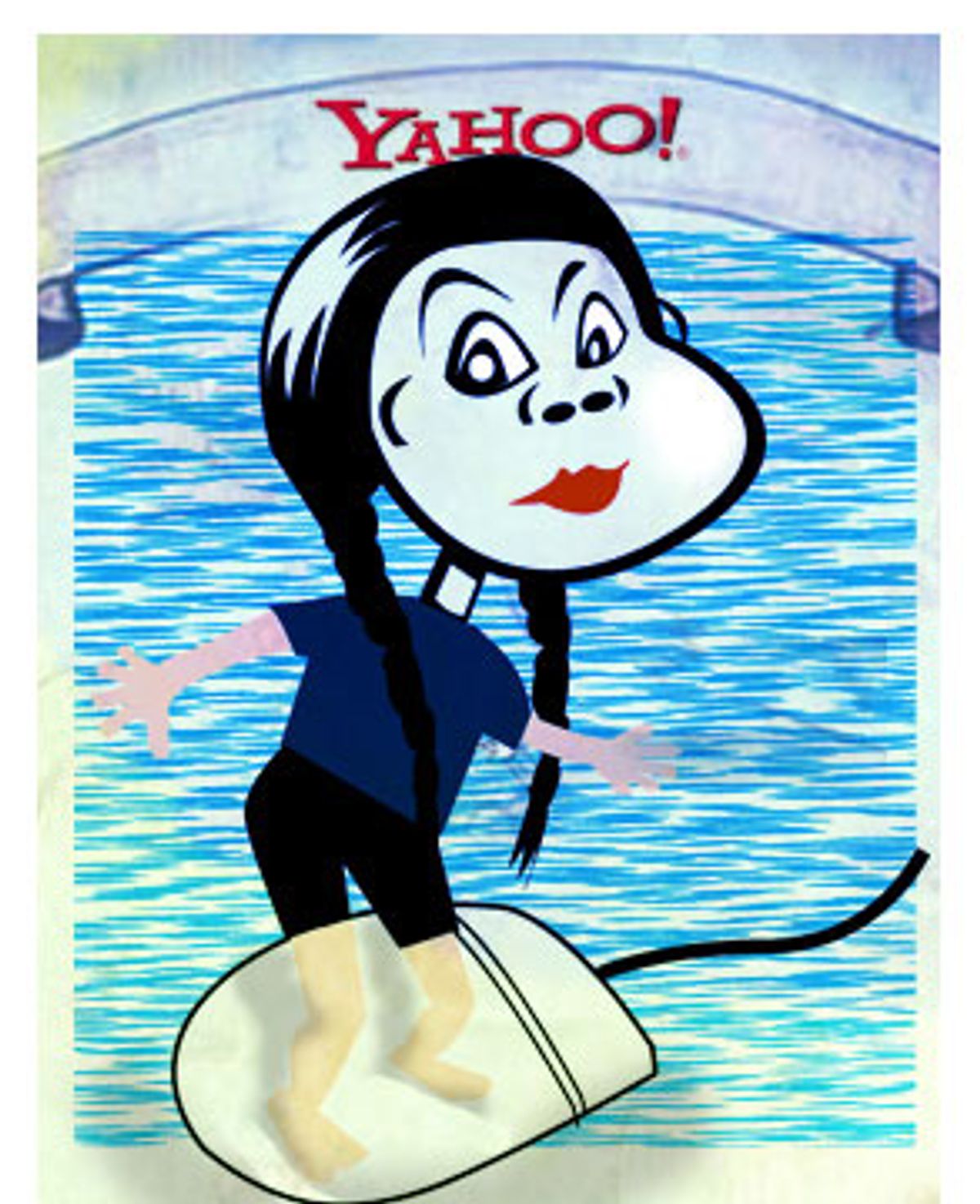 Nine women perch on a row of stools arrayed in front of a theatrical black curtain.

Flat-screen monitors mounted behind their heads flash screenshots from sites including Friendster and the Wedding Channel, syncopated to a blasting loop of the B-52's song "Roam."

The setup has the slightly giddy feel of a retro game show. Ladies, start your engines!

But these women aren't contestants. They already have all the answers. It's the marketing strategists from Procter & Gamble and General Motors and other brand-name corporations who are playing a game. They're blitzing the women with questions, struggling to peg them according to one of eight cutesy Internet types: the "digital diva," an online luxury-goods maven; the "digital socialite," an Evite-happy queen bee who uses the Net to organize her busy schedule; the "digital voyeur," who searches the Web to keep tabs on her ex and lurks in chat rooms. And so on.

Rachel, who gives her age as "almost 23," is a recent transplant to San Francisco from Chicago. She is dressed in jeans, sneakers, a T-shirt, a zip-up hoodie and a belt decorated with pink flamingos and palm trees. She gamely tries to explain to the suits clustered around her exactly what it is that she does on the Internet.

The short answer: Um, everything.

A habitué of Craigslist, Rachel says she has used the Net to find a roommate, find her apartment in Hayes Valley, and find her part-time job. If she gets lost and doesn't have Net access, she'll call a friend who does and ask her to go to MapQuest and get directions. She pays all her bills online and reads the news on S.F. Gate and N.Y. Times.com, two sites she doesn't even bother to refer to by the names of the newspapers they represent. She's selling a car online right now.

One exec asks Rachel, who first logged on in 1994, when she was 12, "What percentage of your life is influenced by the Internet?" Her answer: 100 percent.

And what would she miss most if the Internet was taken away? "E-mail," Rachel replies. Barely suppressing the implied "duh," she adds more delicately: "It's kind of obvious."

At the daylong conference "Real Women. Digital World," held at Yahoo's Sunnyvale headquarters last Thursday for some of the company's biggest customers, Rachel and her eight lineup colleagues are supposed to represent the "real women." That's a highly qualified, preselected and overly determined "real." Yahoo didn't just yank nine random women off the streets and put them in front of some of their biggest clients. These envoys from the real were brought onto the Yahoo campus by a firm called Just Ask a Woman. Some are married, some have kids, some stay home with those kids, some work outside the home. The one thing all these women have in common is that they use the Net -- a lot.

Ten years after companies first started wondering how to market to women on the Internet -- then just shy of 10 percent of the online population -- it already seems quaint to ask: What do women do online? Um, everything. Next question. Are we really still having this conversation? But at the conference, Mary Lou Quinlan, the CEO of Just Ask a Woman, argued that a bevy of tired stereotypes cloud the subject of women online and deserve to be put to rest. One myth: "Women go online for purpose, men for pleasure." Women, this theory holds, are kind of earnest, time-starved taskmasters, using the Net as a helpmate, a tool to save time and conquer their overflowing to-do lists.

Not so, Quinlan argues: Women aren't just searchers or surfers. They're both -- which she describes with the ungainly neologism: "surchers." Watch for that one in a future game of buzzword bingo. Of 1,199 women surveyed between the ages of 18 to 49, in a market research study commissioned for the conference, the No. 1 type of site that women say that they visit online is "news and information." Astrology comes in last, after sports. The feeling that they said they were most likely to have while on the Net? Being "entertained."

The conference offered no comparative data on what men are up to online, but the point seemed to be, don't relegate women to some kind of girly sandbox. "Don't put her into the ladies' room of the Internet," cautioned Quinlan, who lumped the Internet's women's sites together as an ignominious "pink ghetto." Moms don't hang out only in parenting chat rooms -- though they can be found there. "Forbid stereotyping in your organization," Quinlan declared.

If anything, the "real women" on the stage suggested a different interpretation of the "badge of busyness" that's become a kind of status symbol to Americans who endlessly complain about how over-scheduled and under-slept they are. Working women brag about instant messaging with friends while shopping, and reading news sites when they're on the job. Quinlan called this sense of entitlement "the right to take back part of their day." The theory is that because women -- and all other Americans -- are working more hours and taking fewer vacations, they feel entitled to reclaim a slice of time from the Man, and maybe (or maybe not) stay later at the office to make up for it.

Rachel, 22, who has been online much longer than she's been in the workforce, said she realized that she "doesn't have to hide" her workday wandering on the Web from her boss. Not after she learned that all those packages coming into the office were the fruits of his on-the-clock online shopping. "My boss, all he does is shop on the Internet. It turns out all he does is shop all day long," she said, drawing happy laughs from the marketers in the audience.

To the people who are trying to sell advertising that will reach those self-professed "time-starved" women, the news that they're finding the time to goof off online at work is a message worth giggling about. In their press release touting the conference, Yahoo and Starcom MediaVest Group, the sponsors of the market research, dubbed it nothing less than the "re-emergence of the daytime women's audience online." Forget daytime soaps! Women are at work now, where they're Web surfing instead of loafing around the water cooler, which means that you could be reaching them at their desktops with your messages about Purina Cat chow!

But the thing about real women, like Rachel, is that surchers or no, they cannot be counted on to spend their time online looking for what marketers wish they would.

"Do you clean your own home?" a systems manager for Procter & Gamble pressed Rachel, in the game show portion of the proceedings. Yes, she does most of the cleaning. But does she go on the Internet to get information about how to do that cleaning better and faster, how to waste less of her day on it? Er, no.

Finally, Rachel, part of that generation that's been marketed to since birth and couldn't be more savvy about it, is asked the question of the day by one attendee, who puts it to her in almost a hushed tone: "How do you feel about Yahoo trying to get into your life?"

Rachel, who notes that she's been doing focus groups since she was 5 years old, so long ago that she used to get paid in candy, not cash, laughs playfully: "They pay you enough, and you don't care."