Morgan Spurlock, the man behind the film "Super Size Me," talks about eating nothing but McDonald's for 30 days straight and how he feels about Big Macs now. 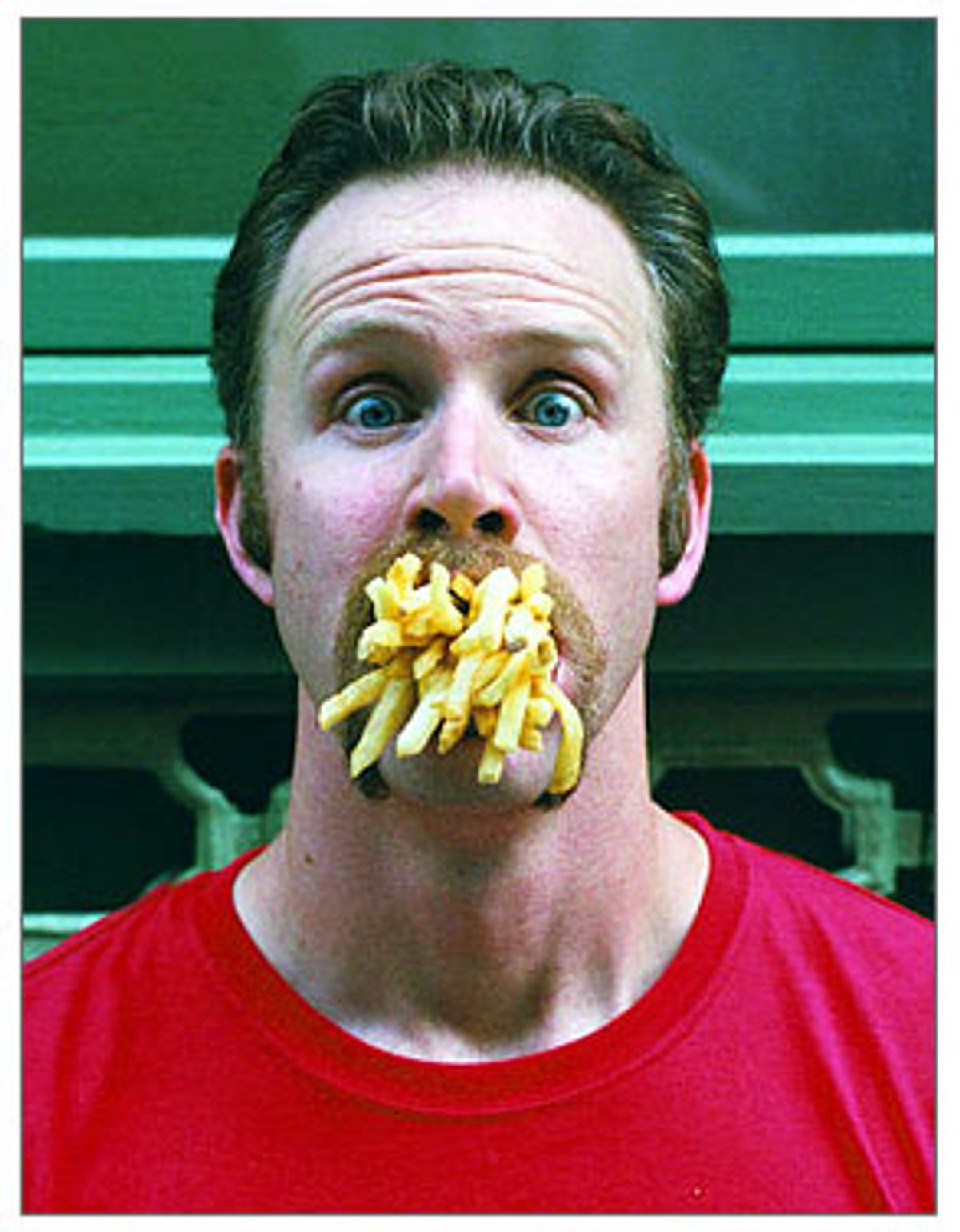 As Morgan Spurlock tells it, the idea for the film "Super Size Me" came to him in 2002, during one of those quintessentially American moments: He was sitting on the couch, stuffed with Thanksgiving dinner, watching TV. On the evening news that night was a story about two teenage girls who, the previous August, had sued McDonald's (ultimately unsuccessfully) for making them fat. In its defense, McDonald's claimed its food could be eaten as "part of any balanced diet and lifestyle."

Spurlock was struck with inspiration -- what he calls "a really great bad idea" -- to make a documentary about living off nothing but McDonald's for 30 days, just to see if it could be done.

"Super Size Me," which opens nationwide on Friday, follows Spurlock from his pre-McDiet physical checkups -- he started out in perfect health, and consulted three doctors and a nutritionist throughout the month -- through the weight gain, vomiting, sexual dysfunction and depression brought on by his steady intake of Big Macs and fries. In between bites, the 33-year-old filmmaker traveled across the country, visiting schools and talking to nutrition experts, lawyers, schools, a gastric-bypass patient and Don Gorske -- a man who claims to have eaten over 19,000 Big Macs and have a healthy cholesterol level of 155.

The movie is less of an attack on McDonald's than it may seem; the occasional barrage of statistics is relieved by humor and gross-outs (a rectal exam, the McVomit scene). After all, the profits Spurlock used to finance "Super Size Me" came largely from his short-lived MTV show "I Bet You Will," in which he paid people to perform disgusting feats. But the film takes a darker turn as it becomes clear that Spurlock's "great bad idea" is having a truly bad effect on his health.

Salon spoke to Spurlock in the offices of his production company in New York.

Part of the film is devoted to your attempt to get a statement from McDonald's about the movie. Has anyone from the company contacted you yet?

They wouldn't talk to me. I think their thoughts were this was just going to be a little movie that would disappear, and it hasn't. The movie premiered at Sundance, and they said the movie was a supersized distortion, that it was a gimmick, and then six weeks later they announced they were eliminating supersize options from their menu -- and that it had nothing whatsoever to do with this film. Then just a few weeks ago they announced they're coming out with their "Go Active" adult happy meals on May 6. And when does the movie open? May 7. So there's definitely damage control going on.

The subject of the movie is, really, your body -- you gained a lot of weight, your liver was damaged, possibly permanently. How are you feeling? Has it changed how you eat?

I'm much better now. It took me 14 months to lose the weight completely. I pay so much attention to what I eat now because after I gained that weight, I can put it on again just like that. I talked to a doctor -- a friend of mine -- and he said, "Now that you've put on that weight, those fat cells are still in your body, wanting to do what fat cells do, which is store energy. Now whenever you overeat, if your body doesn't use those calories, your body is going to store it."

Most of the time she was being interviewed, I wasn't around, because I wanted her to feel comfortable to say whatever she wanted. When I came back later and went through the footage, I saw that Alex was talking about our sex life, and the editors were both like, "Morgan, we can't put that in the movie," and I was like, "Of course we do. That has to go in there."

I wanted to make a move that was very honest about what was going on with my body, and the way that it impacted my relationship with Alex was evident, not just sexually but mentally: It was hard for me to connect. I was so depressed. I was so run-down.

You've probably heard about Soso Whaley, who, for the month of April, also ate nothing but McDonald's, and lost weight.

Well, you know, she's limiting the amount of calories she eats in a day, and she's exercising more: the two things no American does. So, yeah, if every American ate less and exercised more, we wouldn't have an obesity problem. But the fact is we don't. We overconsume and we don't exercise. I think she's kind of missed the point of what the film is about. She's looking at the movie as an attack on McDonald's.

The other thing you should be aware of is that she is a fellow at a lobby group based in Washington, the Competitive Enterprise Institute, which is a lobby group funded by the food companies and by cigarette companies and, god, who knows who else. You have to question their motives.

Were you ever asked to stop or leave while filming in McDonald's?

We were doing an interview in a McDonald's in Boston yesterday and the photographer wanted to get some pictures. So we went up to the counter, I leaned on the counter, and he took pictures of me with the board in the background. And all the people who were working there just looked. Nobody said anything. Because if you're making $5.25 an hour, who cares? It's like, yeah, I'm really going to fight for this, because I'm really upset about you being here.

What about while you were making the movie?

Every once in a while they'd ask us to turn the camera off, and we'd either keep shooting until we got what we wanted, or we'd go to another restaurant and I'd sit down and eat and it'd be fine. But 90 percent of the time, nobody said a thing.

After seeing the movie, I felt the same need to talk to people about it as when I saw "Bowling for Columbine." What do you think about being compared to Michael Moore?

Well, first off, that a movie would make you want to talk -- that's what needs to happen right now. There needs to be more dialogue, because we've become completely complacent in our culture about how we eat. Eating has become mechanical. It's just, Oh I'm hungry, I'll go in here and eat this, and we don't think about it. We don't think about where our food comes from or what it's doing to our bodies.

And as far as being compared to Michael Moore -- that's incredible, what an honor to be compared to that guy. This is my first movie, and I just tried to make a good movie.

Are you surprised at the way the film has taken off?

It's been like wildfire what's happened. I think it's because people want change, and they're tired of what's going on. There have been so many news stories, and I think the movie opens it up a little more, in a way that makes it very accessible. We have, in the film, created something that really talks about this incredible epidemic in our country.

With the success of Michael Moore's films and others, it seems like there is a growing trend of left-leaning, progressive, anti-corporate documentaries. Why is that?

I think that documentary is your last bastion for any truth today. It's the one place where you have no media conglomerate telling you what to say, the one place where people aren't going to put a vice on opinion and on fact. You can put something out that takes a stand and says, Listen, you need to know this.

Whereas it's like watching "Entertainment Tonight" when you watch the 10 o'clock news. What happened to the news? Didn't we actually use to get news here?

Do you still eat fast food?

I had a burger yesterday. I don't eat much fast food, because there are so many better places to get burgers.

What's your favorite thing on the McDonald's menu?

Big Macs. Big Macs are so good. I will smell a Big Mac, and immediately my mouth will water and I will crave it. I'm like one of Pavlov's dogs. But I can't eat them now. I can't stomach their food -- it doesn't even taste like food to me. If I eat their french fries they taste like smoked plastic to me. They taste like the most artificial, manufactured, long, yellow thing. And their Cokes -- if I drink a fountain Coke from there, up and down my nasal passages for hours afterward I'll smell this chemical aroma.

I've become so hypersensitive to their food that my body just instantly picks up on everything artificial in it, which is a lot of it. It's probably been about a year now since I've eaten there. Though to this day I'll smell it and I'll want it.

What was the scariest thing about the whole "Super Size Me" experience for you?

You know, of all the crazy things that happened to me and as bad as I felt, the most frightening thing of all is the school lunch program. We feed our kids terribly in schools. It's atrocious. When it comes to the lunchroom, they might as well be eating in a 7-Eleven in a lot of these schools.

Yeah, I went to a high school that was one of the first to have a McDonald's in the cafeteria.