As Joey, Monica, Chandler and the rest of the bed-hopping gang prepare to exit, we explain why we kissed them goodbye long ago. 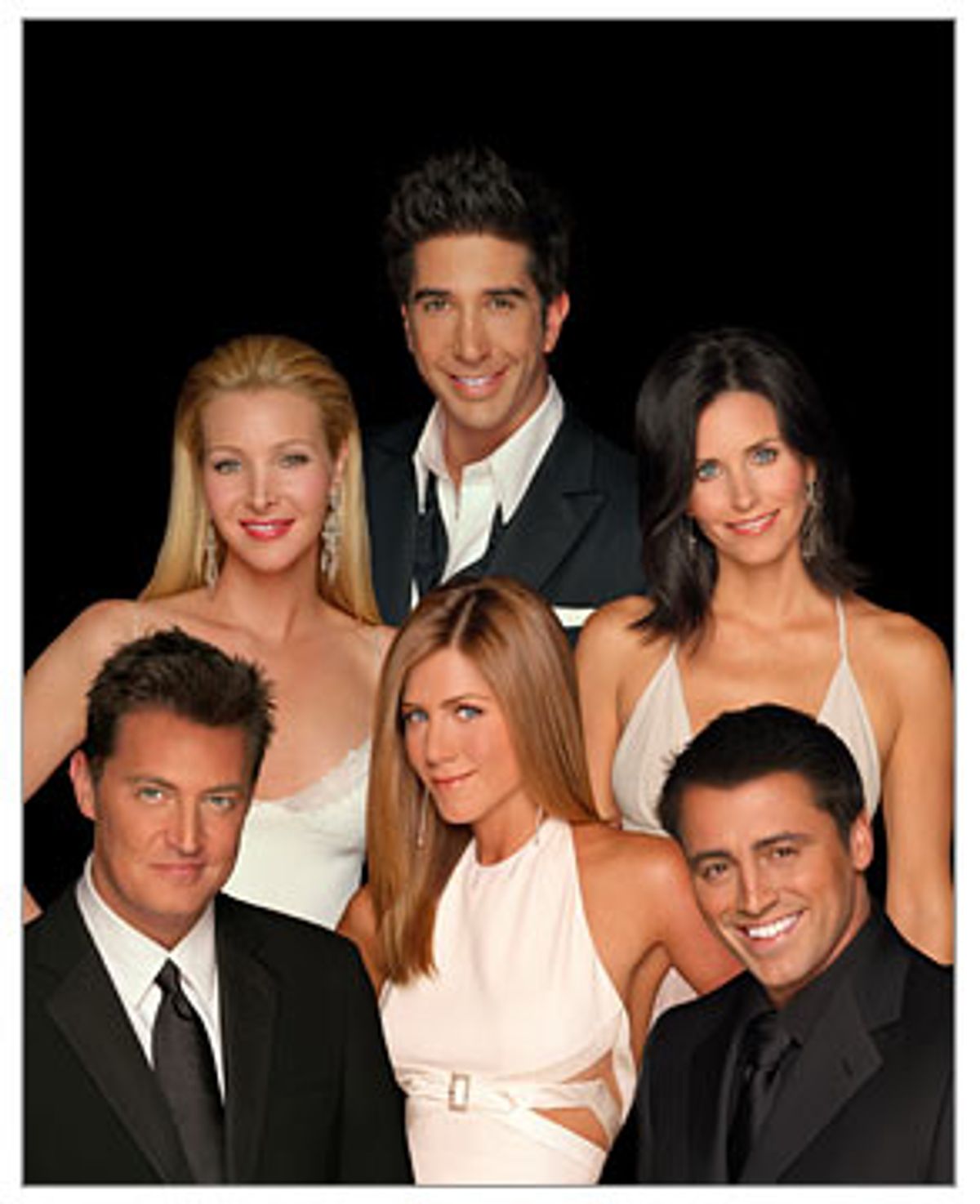 Yes, you know that "Friends" airs its final episode Thursday night, that your local news will follow it with teary scenes from pubs and crowded apartments in your town or city, along with exclusive scenes from the final show's taping and misty-eyed reminisces from Matt, Courtney and maybe even Jennifer. Many of you will be moved, and go to bed feeling a sense of profound loss.

We won't. Sure, now in its tenth year, the show has been a remarkably successful franchise, and despite the strain on our suspension of disbelief (didn't I see Jen and Brad's 100,000 square-foot manse described in detail last night?) has remained a ratings juggernaut, losing only a little audience in its waning years. But some of us kicked these "Friends" to the curb a long time ago.

Some Salon staffers offer their own reasons below (1999 was not a good year) and we also invite you to offer your own reasons by submitting them here, with the subject line: "Friends." We'll run them Friday, along with Heather Havrilesky's review of the finale.

When Chandler left Joey I [Season 6, Air date: Oct. 7, 1999] Joey and Chandler made such a nice couple. So what the hell is Chandler doing with Monica? How can we possibly cheer those two on to love and marriage and life in the suburbs, when it's so obvious that Chandler let the one true love of his life get away? Remember that hilarious episode when Chandler spent Thanksgiving in a stereo box just to make amends with Joey for kissing Joey's girlfriend? Do you honestly think that Chandler would crawl into a cardboard box for that charmless shrew Monica? And how could Rachel ever expect to fill the void left in Joey's heart? Remember that season finale when Joey accidentally whipped out the engagement ring Ross was going to give Rachel when she was pregnant, and Rachel agreed to marry Joey on the spot? She didn't really want Joey, she just wanted a piece of the happiness that Chandler and Joey had known together. And who doesn't?

When perfect was no longer enough [Roughly the same time as above; Season 6, 1999] Likewise, maybe we all watched "Friends" at first because we wanted a piece of the magic that carefree, hot people with massive apartments, lots of free time and endless amounts of love for each other seem to carry around with them. Watching the gang hang out at Central Perk was all about living vicariously in beautiful, funny, perfect people land. As great as that was for a few years there, isn't it sort of nice to know that beautiful, funny, perfect people can be just as irritating as anyone else, if you've known them for long enough?

The cancelled son [Ben Gellar's last significant role: Season 8, Dec. 6, 2001] I can't help it, I just feel sorry for Ben Gellar. The product of late-blooming lesbian Carol and her estranged husband Ross, his impending arrival and appropriately mishap-riddled birth were the focus of some of Season 1's sharpest story lines. (Ross, on a date with a new woman, is awkwardly seated across from Carol and her girlfriend at a restaurant. It can't any worse -- until she rises to her reveal her huge belly). It would have been dire for "Friends," a show about impossibly attractive people working and dating in New York, to turn into yet another wisecracking kids domestic sitcom. Yet Ben's conspicuous disappearance, except for rare occasions when the presence of a child could throw the ineptitude of the gang into comic relief, has served as a prime example of the show's now trademark inconsistency. The final straw for me came at Ross' second wedding to Emily. Though Ross had been firm with her that he couldn't move to London because of his son, he apparently didn't even invite Ben to the nuptials. I wasn't even a parent yet when the show aired, but I had been a stepchild, and felt for the kid. Mostly I was just pissed at the lazy writing. Though I've lost touch with the show since, I still find myself wondering if Ben has even met his half-sister Emma. For a show that celebrates pregnancy -- it's milked endless fodder out of the gestations of Carol, Phoebe, Janice, Rachel, and now Chandler and Monica's adoption mother -- it's quick to forget even mentioning the fate of its actual children. Maybe that's why these six characters are known as Friends -- they're sure lousy at family.

When Chandler left Joey II [Monica and Chandler sleep together: Season 4; Air date: May 7, 1998] I bugged out of the show fairly early on with Chandler's romance with Monica. It wasn't a pure jump-the-shark moment, but it signaled one of the time-tested plot devices that the creators had run out of new ideas (i.e. write a romance between the principal actors into the show, then follow that with births, deaths, etc.). Perhaps only "ER" has used more clichéd plot devices to keep its pulse pumping.

Monkey business [Season 1, Air date: Dec. 15, 1994] Whether on film or TV, I've never been a fan of the human-meets-monkey trope. The clever, misbehaving chimp, out of the wild and into the human world, generally going gonzo and outsmarting the hapless human who's inevitably chasing him (see the Bonzo movies, "Going Ape," "Buddy," "Dunston Checks In" and, of course, "Every Which Way But Loose") - it's just not funny. That's why, midway through the first season, when Ross rescues Marcel the monkey from a lab and brings him to the gang's New Year's Eve party, it seemed like the show had jumped the shark before it had barely begun. Obviously, Marcel's appearance wasn't a harbinger of things to come (though a duck and a chicken, unfortunately, were) but when you bring a monkey onto the soundstage ... well, you've lost me. (Marcel fared well post-"Friends," however: he was the first cast member to leave the show for Hollywood, with a role in 1995's "Outbreak.")

When Chandler left Joey III [see above] I stopped watching "Friends" around the time Chandler started dating Monica. Chandler had metacognition and actual good looks, not to mention the cute, geeky tendencies that by all rights paleontologist Ross should have exhibited. Why in the world would he deign to hang out with this crowd, much less marry one?

The toy story [Season 6, Air date: Oct. 21, 1999] The year was 1999, the place was San Francisco. Recently relocated to the Bay Area, I stood at the threshold of that tempting netherworld -- online dating. On the "Which celebrity do you resemble most?" question, I deferred to a friend, who said I could safely go with Chandler. That night, I watched in horror as funnyman Chandler proceeded to get a toy stuck in his throat; self-esteem precluded me from ever watching again.