A journalist's investigation of holy Christian visions turns into a tortured spiritual quest. 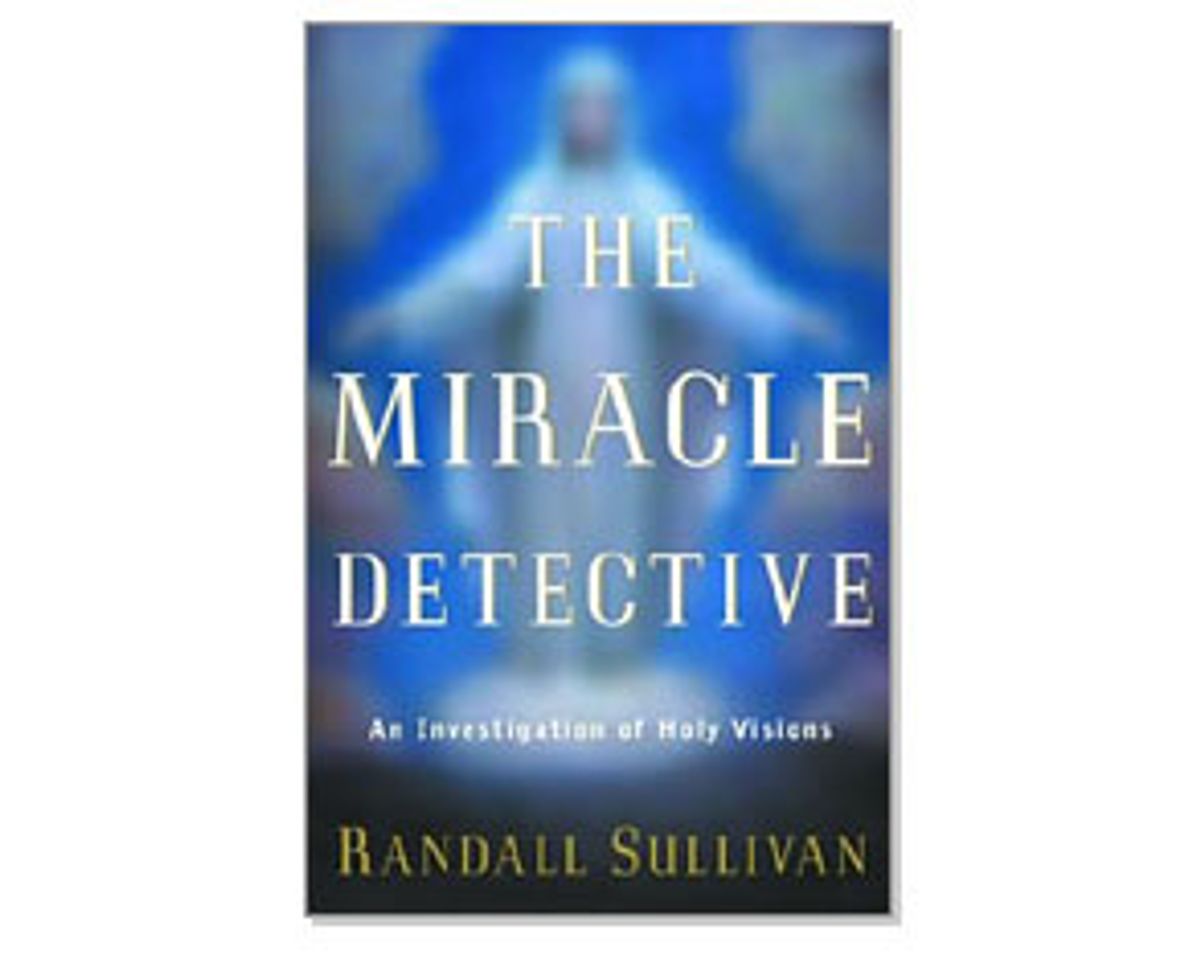 There's a rule of thumb among fiction writers that says if you're going to use an unreliable narrator, make sure the events in your story are realistic; if you're going to depict surreal or magical events, make the narrator trustworthy. Either way, you give your reader a scrap of solid ground to stand on. Although Randall Sullivan's "The Miracle Detective" is a work of nonfiction, it still manages to stray from this path. Ostensibly, the book is an "investigation" of religious apparitions (particularly of the Virgin Mary) and other such sacred manifestations, and of how the Catholic Church goes about determining which are legitimate miracles and which are something less. In reality, it's the story of Sullivan's own tortuous spiritual quest, which plays itself out in part through his work as a journalist. Whether "The Miracle Detective" has something valuable to say depends on what you want to know. For the curious skeptic, it's certainly not a very reliable account of this strange phenomena, but it does offer a fascinating glimpse at the paradoxes of religious faith.

Sullivan, a contributing editor at Rolling Stone and Men's Journal, is the author of two previous, well-regarded books on famous crimes (the Billionaire Boys Club killings and the murder of Tupac Shakur). A talented, intelligent writer, initially he seems an ideal guide to what is, in effect, a booming subculture. Marian apparitions and similar holy visions are reported so often these days that they barely match one of the dictionary definitions of the word "miracle": "an extremely outstanding or extraordinary event." The best-known examples -- apparitions at Lourdes in France, Fatima in Portugal and Guadeloupe in Mexico -- have spawned entire tourist industries and religious movements. To an outsider, they look like the superstitious fringes of Catholicism, so when Sullivan explains that the current pope, John Paul II, believes that Our Lady of Fatima saved him from an assassin's bullet in 1981, it comes as a bit of a jolt.

The pope's adherence to such "quaint" beliefs doesn't sit easily with all Vatican officials, however. Sullivan describes a church divided between those clinging to the old ways ("traditionalists") and those who want to liberalize the Vatican to make it more compatible with a secular world (presuming that ours is a secular world, and that's presuming a lot). The split makes the work of a body called the Congregation for the Causes of the Saints particularly fraught. This outfit is in charge of vetting candidates for sainthood, an elaborate and painstaking process that Sullivan lays out with lucid economy. After an initial character assessment determines that the person qualifies as "venerable," the candidate needs one verified miracle to merit beatification. Canonization, or full sainthood, is bestowed when a second miracle has been proven. "Miracles" consist almost exclusively of "otherwise inexplicable" medical cures obtained by praying to the candidate and the candidate alone. Living people, who can't answer such prayers, are never eligible for candidacy.

The validation of miracles is an equally complicated endeavor. Like canonization, the process is, as Sullivan writes, "codified down to the smallest detail." This is the very essence of the Vatican, the application of a rationalized, efficient bureaucratic structure to matters arising from the chaotic, unpredictable heart of human unreason. It's superficially comic, but can't be dismissed as merely that; the Catholic Church has used this unlikely strategy to forge one of the most potent and enduring political forces in history. However, the stately, centuries-old monuments of the Holy See still stand on the hot and shifting ground of religious passion. No entity within it feels the contrast more keenly than the Congregation for the Doctrine of the Faith (formerly the Congregation for the Holy Inquisition of Heretical Error -- yes, that one), which is charged with investigating and evaluating the apparitions, visions and raptures experienced by living mystics.

Sullivan provides brief sketches of some notable cases tackled by the office, including Joseph, "the flying friar" of Cupertino, who was reported to cruise over the heads of witnesses, alighting at the foot of a statue of the Virgin and then fly out again, emitting nothing more than "his customary 'shrill cry.'" And there is Alexandrina da Costa, a Portuguese paralytic who, having received "consolation through a golden 'tube of love' connected directly to Jesus Christ," levitated from her bed every Friday and moved through the Stations of the Cross. But bizarre and amusing as the seagull-like antics of Joseph or the Freudian imagery of Alexandrina may be, they are the kind of event that draws thousands of onlookers and disciples, often within a matter of days or hours. The hunger for spiritual spectacles -- whether it's an airborne monk or a run-of-the-mill weeping statue -- hasn't faded with the supposed secularization of the modern world. If anything, it seems to have intensified, fed by the souped-up rumor mill that is the mass media.

Sullivan begins his book with the story of a young woman in Oregon who caused a sensation when she saw the Virgin Mary glowing in the upper right-hand corner of a landscape painting hung in the trailer where she lived with her parents. The fuss blew over in a few years, after attempts to erect a shrine came to naught, but Sullivan was intrigued. His interest finally took him to Medjugorje, a hamlet in Croatian Bosnia and the site of one of the longest ongoing patterns of Marian apparitions today. Beginning in the early 1980s and lasting through the bloody civil wars of the 1990s, a group of six young people claimed that the Virgin Mary appeared to them at intervals of varying length, exhorting the faithful to believe and to pray. As with several other such manifestations, she also entrusted the visionaries with a list of prophetic and apocalyptic secrets.

Even before Sullivan gets to Medjugorje, a town transformed by the influx of tens of thousands of pilgrims, the project begins to affect him. Simply picking up a book and browsing a chapter on the visions causes him to shake "almost convulsively" as he leaves the bookstore. Within a day of arriving in the village, he undergoes "the first real religious experience of my life" while climbing the local holy mountain. As narrators go, he is violently susceptible to his surroundings, rendered "literally incapable of speech" during an interview with one of the visionaries and forgetting "completely why I was there" after running into another. His heart "nearly stops" upon meeting one of the pilgrims who obtained a miracle cure at Medjugorje and he begins to "shiver uncontrollably" when she tells him about her family's encounters with a spectral black dog and a demonic Ouija board. By the time Sullivan spots the devil himself, leering at him across the Piazza Navona in Rome, it hardly comes as a surprise.

Because Sullivan fears revelation as much as he is primed for it, skepticism never gets a fair shake in "The Miracle Detective." Ironically, it's easy to see how a less conflicted believer might have offered a more enlightening account of Marian apparitions, a book that could calmly lay out an assortment of interpretations before selecting one. The anxiety Sullivan feels over choosing to believe keeps him intellectually cramped and the book strictly limited to the splitting of doctrinal hairs -- for example, are the visionaries seeing the actual person of the Virgin Mary, or are they simply attaching that name to a divine but less exalted manifestation? Sullivan lists every name and credential of the long list of medical doctors brought in to certify that the Medjugorje visionaries were neither insane nor playacting. Then he deplores "science" for its reductive, materialistic conception of the universe. If scientific authority is inadequate, why cite it so obsessively?

Most frustrating, we get an exhaustive catalog of every detail related to the Medjugorje drama and not much of an overview of what Marian apparitions might mean. It's intriguing, for example, that they almost always appear to children or pubescents, something they have in common with poltergeists and the visions that led to the Salem witch trials. The most celebrated apparitions seem to show up on the eve of war, another correspondence to the Salem ordeal, which the historian Mary Beth Norton has suggested was a reaction to the colonial Indian Wars. Why are bodily secretions -- blood, tears and mysterious "holy" oils -- so often involved in these miracles? How do the ecstatic convulsions Sullivan witnesses during a massive prayer meeting in Medjugorje compare to the fits that overcome American Pentecostals? How do recent discoveries about the unreliability and malleability of memory -- specifically, the power of suggestion to plant false memories -- affect the credibility of eyewitness reports of miracles? Sullivan, who spends a lot of time plunged in despair and walking in the rain without an umbrella, never bothers to ask.

It's not until the end of the book that Sullivan encounters the kind of thinker who can contemplate such matters without freaking out: Father Benedict Groeschel, an American priest and clinical psychologist (Columbia University, in case you were wondering) responsible for evaluating supernatural phenomena in this country. Up to this point, Sullivan has been driving himself nuts by insisting that the visionaries he's met must be one of three things: liars, lunatics or truth-tellers. Groeschel is the first person he encounters who dares to suggest that this rigid schema is inadequate even to non-spiritual human affairs. People can be both profoundly sincere and profoundly mistaken without having to be insane. "Religious visionaries can be a little dishonest or a little crazy, or both," says Groeschel, "at the same time they are experiencing and reporting genuine apparitions." You don't have to agree with Groeschel's beliefs to find the light he sheds on Sullivan's self-inflicted torments refreshing. More about him would have been most welcome.

Ultimately, though, the fixation on miracles strikes this unbeliever as perverse. Sure, the circus that collects around visionaries leads to renewals of piety, but only, I think, among those who are already looking for a reason to fall to their knees. Even those avowed skeptics who devote vast amounts of time and energy to debunking miracles have the air of conversions waiting to happen -- otherwise, why bother? -- so it's no surprise that they often wind up convinced. If the essence of Christianity is faith, then this preoccupation with "proof" delivered by supernatural signs and wonders, the demand that their God give them a reason to believe, undermines the religion. Part of Christianity's beauty is that it promises to give everything by demanding everything from its adherents, and asking for magical cures on the side cheapens the exchange. How far is that from cutting an ox's throat on some pagan altar in exchange for a rich harvest? And what kind of supreme being can be bargained with? Or, as Groeschel tells Sullivan, "I hope you come to understand that even if you were capable of making an airtight case about Medjugorje, that wouldn't result in true belief. True belief is a decision. It's also a gift. Accept the gift and you will make the decision."