How could women do that?

Female soldiers were supposed to be a civilizing influence on the military. Then came Abu Ghraib. 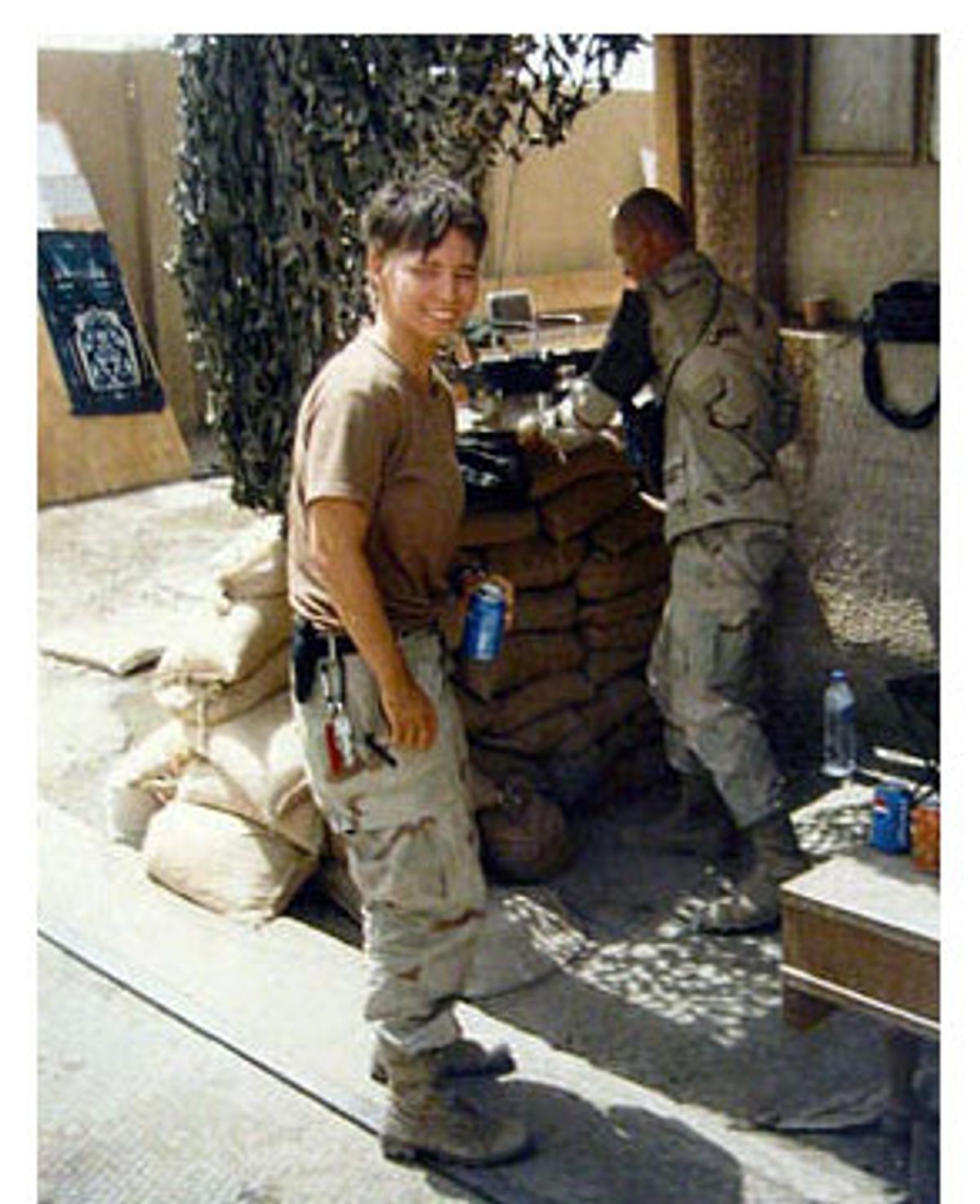 Of all the shocking photos to come out of Abu Ghraib, some of the most harrowing feature not a male but a female soldier, Lynndie England, an apple-cheeked 21-year-old from Fort Ashby, W.Va.

England has quickly become infamous for the photos in which she appears: There's the one of her jeering at hooded Iraqi prisoners standing in line, cigarette dangling from her mouth, pointing at the prisoners' genitalia. And there's the one that appeared yesterday, in which she's dragging a prisoner around by a leash attached to his neck.

She is now detained at Fort Bragg, N.C., where she has reportedly been denied legal counsel. (England, the only one of the accused to be dismissed from duty, is pregnant.) According to news stories, her family contends that she was a "paper-pusher" who wasn't trained to interrogate prisoners and was only "in the wrong place at the wrong time." Perhaps. But that doesn't change the global reaction to the photos: How could American soldiers gleefully torture other human beings? And then: How could a woman do this?

When the subject of women in combat was a hot topic in the 1980s, proponents argued that female soldiers would humanize the hypermasculinized machinations of the military -- perhaps even help prevent scandals like Abu Ghraib from happening. But the terrifying reports from the past week have thrown a major wrench into that theory. For centuries, women have been the casualties of mass rape and sexual torture during wartime, but for the first time in American history, women are accused of being perpetrators of sexual humiliation against male prisoners of war. Besides England, two other of the six soldiers who face court-martial for abusing Iraqi prisoners are women (Spc. Megan Ambuhl and Spc. Sabrina Harman). And, of course, there's former Brig. Gen. Janis Karpinski, the only female commander in the war zone, who oversaw Abu Ghraib and two other large jails until she was relieved of her position.

Linda DePauw, a retired professor of history at George Washington University and head of Pasadena, Md.'s Minerva Center, a nonprofit educational foundation that studies women in the military and in combat, says, "The military took women because of militaristic necessity in the '70s. Men stopped signing up in the Vietnam War. Women were good troops because they were less likely to cause disciplinary problems. This idea that women will make the military kinder and gentler is counterintuitive -- we don't want a gentler military. You join the Red Cross or Greenpeace to be kind and peaceful -- not the military."

Cynthia Enloe, a government professor at Clark University who specializes in the sexual politics of the military, believes that Abu Ghraib's scandal was a result of gender dynamics not only between reservists, but between the higher-ranking military intelligence and the lower-ranking brigade: "Did the military intelligence wield masculinity over the reservists? In the midst, woman reservists are under a lot of pressure to fit into a highly sexualized, masculine culture."

Despite efforts to blame the abuse completely on the six low-level reservists in the 372nd Military Police Company who participated, high-ranking military intelligence may have approved and perhaps even engineered the abuse as a way to "soften up" the prisoners. Experts interviewed for this article all agree that the problem does not lie with a few errant soldiers, but with the chain of command -- a view that's gaining popularity in Washington as well. The question is, if the higher-ups pushed for such abuse to extract information, was it their intention to play on the prisoners' fears of emasculation -- to exploit strict Islamic sexual codes -- to dehumanize them?

One of the abused prisoners, Dhia al-Shweiri, has been widely quoted from an Associated Press story as saying that he was more humiliated by the sexual abuse than the physical pain. "We are men. It's OK if they beat me," al-Shweiri said. "Beatings don't hurt us; it's just a blow. But no one would want their manhood to be shattered. They wanted us to feel as though we were women, the way women feel, and this is the worst insult, to feel like a woman." (Bush's apology on Thursday for the abuse hasn't been accepted by Iraqis, either; on Friday afternoon, the AP reported that an aide of Shiite cleric Muqtada al-Sadr, Sheik Abdul-Sattar al-Bahadli, encouraged Iraqis to capture British soldiers in retaliation for the abuse -- and keep the female ones for slaves.)

Stephanie Guttman, the neoconservative author of "A Kinder, Gentler Military," believes that Islamic male prejudices may have even affected the female troops' degrading treatment of the prisoners: "Women can act just as badly as men. I think they have been aware of the Islamic attitude about women -- which is not respectful. They may have subtly enjoyed being sadistic to the kind of men who enjoy humiliating other women."

Enloe disagrees: "I don't think this is especially humiliating for Arab men. It's like saying that form of torture is effective against 'them' but we tough guys can't be softened up that way. But the way torture is designed, it usually plays out the fears of the torturer themselves, not just the tortured."

Some experts on women in the military refuse to see the controversy along gender lines. Carolyn Becraft, a former assistant secretary for manpower and reserve affairs during the Clinton administration, says, "This is not about women. This is about leadership failure. These women were at the bottom of the totem pole. The political leadership has set the stage and I think the political leadership should be held culpable."

Other female veterans who served in previous wars tend to be more stoic about the focus on women in Abu Ghraib. Brig. Gen. Wilma L. Vaught, USAF (Ret.), president of the Women's Memorial Foundation in Arlington, Va., was in the military for over 28 years and during the Vietnam War served as the first female Air Force general. "When you integrate the service and train together, we have to assume these folks had the same training," she says. "They had the same discipline and leadership. There is no need to give it a gendered point of view."

Vaughn takes pride in her service in Vietnam and denies that she had difficulty as a woman in the male-dominated military, but does admit that "we had to have such high standards so that other women can serve. What they've done is disappointing."

The concept of women in the military, especially in combat, is still problematic for Americans, even though women have been serving in combat since 1993. (Right-wing pundit Ann Coulter even suggested that the abuse serves as a reason to keep women out of the military: "In addition to not being able to carry even a medium-sized backpack, women are too vicious," Coulter said, according to today's "Progress Report" from the Center for American Progress.)

It was only last year that the media mythologized Pvt. Jessica Lynch, another hometown girl from West Virginia and the highest-profile female soldier in the Iraq war, as the damsel in distress, rather than a freedom fighter. At first glance, England could be portrayed as the foil to Lynch: Lynch was the captive, England was the captor. Lynch was rescued by her fellow male American troops from apocryphal reports of abusive Iraqis; England perpetrated abuse against Iraqi prisoners with her fellow male troops.

"Here's another little girl from West Virginia," says Depauw. "But you know what? Lynch was not faced with the challenge of disobeying her superiors. It's very rare that humans will stand up to their legal superior because they think the orders are wrong. It's much easier to be a pawn and play your role."

Cathy Hong is a writer for the Village Voice.