Torture and the chain of command 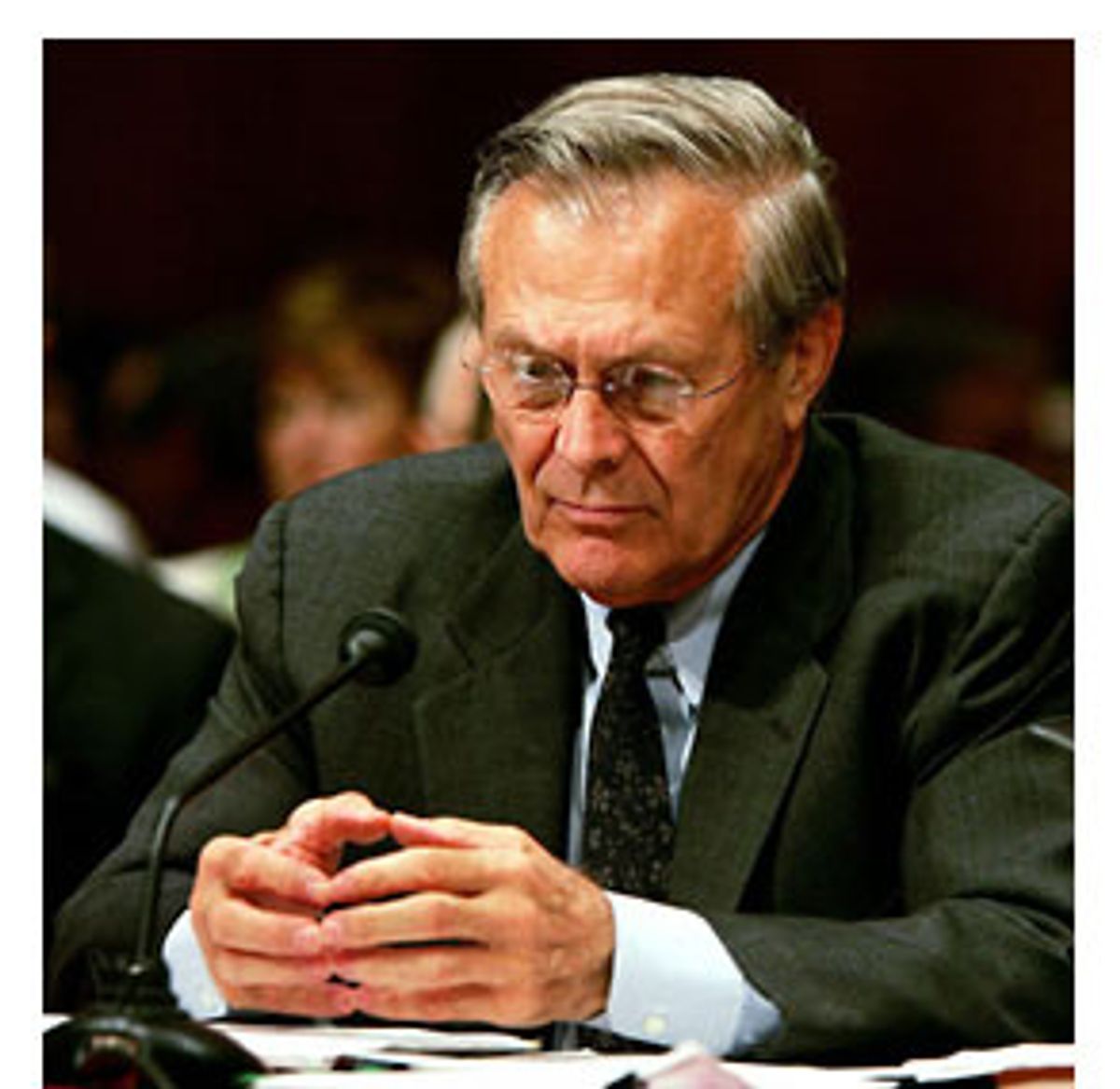 How far up the chain of command did this problem go? What role did military intelligence and CIA officials play in requesting or suggesting abusive activity? Will responsibility be limited only to the perpetrators, or are we going to get to the people who recommended or suggested this conduct? These are some of the questions that Sen. Carl Levin, D-Mich., and other lawmakers are asking at today's ongoing congressional hearings about the Abu Ghraib prison scandal. In his opening statement, Secretary of Defense Donald Rumsfeld preempted his testimony by apologizing for any reticence on the part of Pentagon officials today; he said they would seek to respond "cautiously" to questions in order to protect the rights of the accused while the investigation into the Abu Ghraib torture scandal continues.

But some analysts see little reason for such pause. Pointing to Sy Hersh's stomach-churning account in the New Yorker of the Army's Taguba report, and the photos of abuses that have saturated the media in recent days, one intelligence expert says there is little doubt that the problem is a systematic one.

"We know that CIA was in the prison," Bob Baer, a former CIA case officer in Iraq, told Salon. "I think it's already clear that we're going to find out this was systematic, that it was directed at some level, whether by the agency or by military intelligence." Others have pointed to a disturbing quality noticeable in some of the images of the perpetrators, that the abuse of prisoners, as Hersh reported in the New Yorker, "seemed almost routine -- a fact of Army life that the soldiers felt no need to hide."

The question of who among the military and Pentagon leadership ultimately must be held responsible for the cruel, corrosive -- and illegal -- acts of abuse is currently being sorted out on Capitol Hill. As Rumsfeld and his top military brass struggle to get to the bottom of the issue -- and perhaps to save their jobs -- they still have the backing of some conservatives.

Peter Brookes, a former Naval intelligence officer and deputy assistant secretary of defense in Rumsfeld's Pentagon, says it's appropriate that President Bush has expressed confidence in Rumsfeld, especially during a time of war. "We don't have the full investigation yet, but I wouldn't think that even after the investigation is completed that it would require the secretary of defense to resign," says Brookes, who is now a senior fellow at the Heritage Foundation in Washington. "These are obviously regrettable and inexcusable offenses committed by a small number of people, but I don't think there's been any coverup. From what I can tell, once they knew about it they initiated an investigation right away.

"I don't believe that Secretary Rumsfeld or anybody in the Pentagon would condone this sort of behavior, or would give an order to do this kind of thing," he adds. "In my view, this will turn out to be some commanding officer, either on the military police side or the intelligence side, that was involved in or responsible for these interrogations, and that will be held accountable."

Though Brookes sees the Pentagon leadership surviving the scandal, he acknowledges the gravity of the situation -- and the potential consequences the abuses might have for U.S. soldiers themselves while operating in war zones. "I'm kind of amazed at the behavior of these young troops, and the pictures, I really don't understand it myself," he says. "All soldiers are briefed on the Geneva Convention [covering the basic rights of prisoners of war], but they don't all necessarily become experts on it, because only certain soldiers tend to come across prisoners. The MPs tend to have more training, and then the intelligence interrogators really have to know the Convention because they're restricted there."

"But all soldiers have an understanding of the Geneva Convention," Brookes adds, "because it also applies to them."