Breathy hype and uninspired finale aside, "Friends" will still be remembered as a fresh, intelligent snapshot of the times. 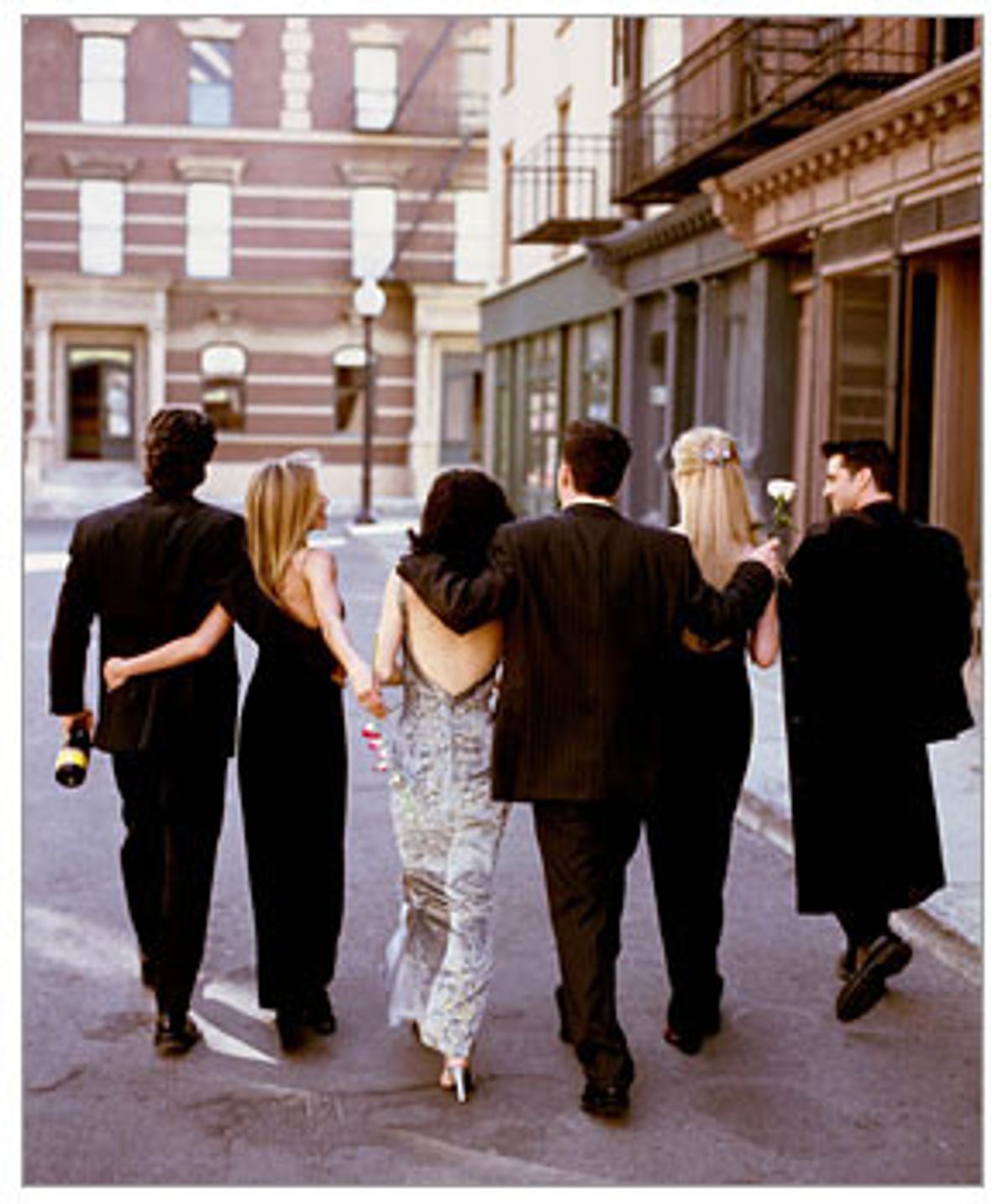 What is it that makes us love NBC's "Friends" so very much? Is "Friends" just a funny soap, or a soapy sitcom? Did "Friends" capture the self-absorption of Generation X? Was "Friends" truly a good show, or was it just popular? Is the end of "Friends" the end of the sitcom? Do we love "Friends" or hate it? Are the "Friends" really good friends? What will Jennifer Aniston do next, and what does she use to make her skin look so soft and dewy?

With all of the frenzied punditry and hoopla surrounding the last episode of "Friends," is it really possible to know -- or care -- how we feel about the show's leaving the air after 10 years? Complicating matters is the fact that this season of "Friends" has been alarmingly awful, far worse than you would ever imagine a show that was once so good could be.

It's not surprising, then, that last night's final episode was not only predictable but seemingly interminable. Packed though it was with Big, Life-Changing Events, the finale still felt like a half-hour show pointlessly stretched out over the course of an hour. Plus, something about the sappy, "I'll be there for yoooou!"-style weight of it all made the whole exercise feel like self-parody.

How about this for a paint-by-numbers final plot: Rachel is going to Paris. Ross suddenly realizes he loves her! Why won't he tell her and keep her from leaving? Because he's Ross, damn it! He needs to get all shy and whine and be coaxed into it for the next 20 minutes like a forlorn puppy, even though he's pushing 40 and has spent every day of the past 10 years or so in this woman's company. So Rachel leaves for the airport, and then Ross and Phoebe drive all the way to JFK to find her! But Rachel is at Newark!

They speed across town and catch up to her nonetheless. Ross: "I love you! Do not get on this plane!" Rachel: "You're confusing me!" She gets on the plane anyway! Ross runs home with his tail between his legs, sad-puppy style! But ... there's a message on his answering machine! It's Rachel! She loves him! She wants to get off the plane, but she can't! But suddenly she's there in the doorway! They embrace!

And then my TiVo stopped recording.

The times sure have changed since "Friends" began back in 1994. But even with all the nauseating hype and the disappointing season and the lackluster finale, it's important to remember what a great show this was for such a very long time.

Even during the first season, when the prospect of a show about 20-something hipsters with great hair and perky breasts living in unrealistically massive New York apartments made those of us 20-somethings huddled in drafty stank-holes cringe and roll our eyes -- even then, we sort of liked the show in spite of ourselves. For all of its dorky sitcom-meets-soap fumbles, with Rachel gazing out rainy windows at night and Ross losing his nerve over and over again, the characters were well formed and undeniably charming.

Their tight shirts and stylish hair bugged us, the name "Central Perk" bugged us, but the show had a distinct, original voice. The characters were friends, sure, but they often broke down and ripped one another to shreds. They were confident but vulnerable and utterly self-deprecating. They had weird little obsessions and were oddly fixated on bits of pop culture from the '70s. While many observers tend to focus on the colorful sets, the fashion and The Haircut as reflections of a new generation's style, the characters themselves were a far more distinct mirror of the personalities and perspectives of the times.

And then, during the second season, "Friends" hit its stride. The jokes and situations could reliably make you laugh out loud a few times each episode. The quality of writing on the show can't be denied: The stories were original and innovative, the jokes felt character-specific instead of being rehashes of the same old sitcom punch lines and, sappy or not, the drama approached the poignancy of "The Mary Tyler Moore Show," but without the bitter aftertaste of loneliness, thanks to those steadfast fantasy friendships that would inspire anyone to dance, fully clothed, in the nearest fountain.

To top it off, the ensemble cast was uniformly talented, but with distinct qualities that allowed them to play off one another's strengths. Aniston quickly proved herself to be one of the most charming and talented female comedians on the air. Matthew Perry managed a flawlessly snide delivery that, in any other hands, would have been grating. David Schwimmer was reliably funny as the fumbling buffoon, Courteney Cox Arquette quickly transformed from a middling actress into an inspired performer and Lisa Kudrow nicely embodied Phoebe's odd character without retreating into a more generically adorable style.

Strangest of all, Matt LeBlanc's idiotic Joey was an absolute scene stealer from the start. Watch LeBlanc closely in almost any scene and note the originality of his delivery, or the way he makes every thought that floats through his head so vividly transparent on his face. Very few actors could not only pull off the dumb-guy role as beautifully and convincingly as he does but also milk each dimwitted reaction for so many laughs.

At this hour, when "Friends" finale hype has saturated the airwaves for months, it's far too easy to proclaim the show a big joke; a pandering, sappy mess; a shiny, happy bit of pop-cultural pap. Plus, most seem to agree that it's a horrible shame not to go out on top, as if anyone or anything that was once truly inspired, whether it's an NBA player, a rock band or a sitcom, should quit the second after that peak performance, and then disappear from the public eye forever

Instead of heaping scorn on the most talented for not raising the bar to impossible heights year after year, why not give them props for injecting some quality and originality into a culture dominated by mediocrity and imitators? Those who participated in such an intelligently imagined portrait of one generation's clumsy trajectory deserve to bask in the warm glow of our appreciation for at least a second, don't they? Yes, "Friends" was silly and sentimental and self-important and fluffy at times. But isn't that an indelible part of what we liked about it? Far more sophisticated, inscrutable, unsentimental comedy certainly exists. Still, there's something to be said for dancing around in a fountain, fully clothed, every once in a while.