From Blackwater to CACI, mercenary companies in Iraq have a warm and cozy relationship with the Republican politicians who are employing them. 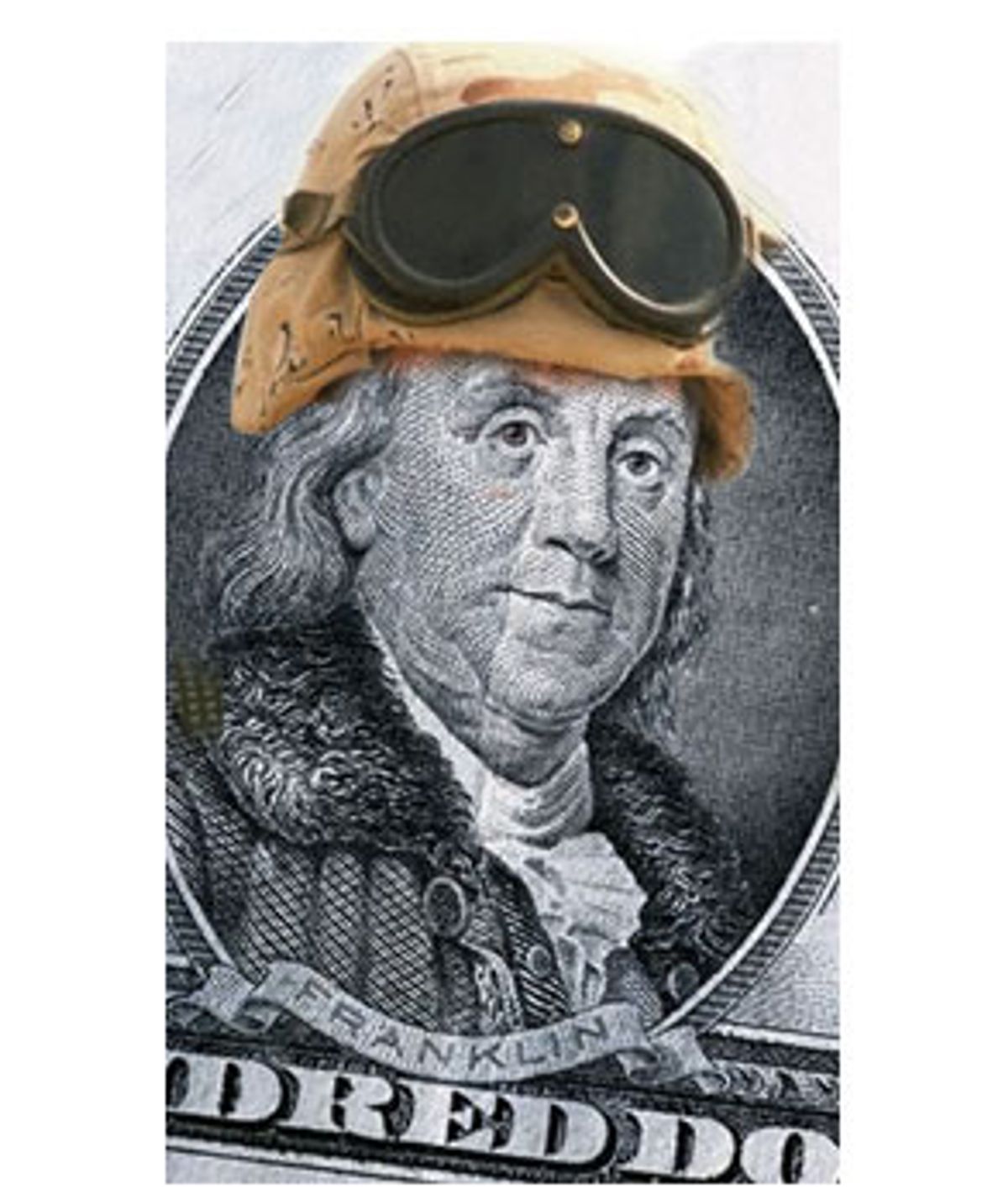 Private armies have become ubiquitous in Iraq, supplying everything from support services to mercenary soldiers to interrogators. While Halliburton's contracts for logistical support have been widely reported, until the firefight in Fallujah in late March left four Blackwater Security employees dead, the public knew little about the extent to which the estimated 20,000 private military forces in Iraq are participating in direct military action.

The shocking photographs of the torture of prisoners at Abu Ghraib prison raise anew questions about the U.S. military's use of private contractors. Maj. Gen. Antonio Taguba's report about practices at the prison contained information that two CACI employees "were either directly or indirectly responsible for the abuses at Abu Ghraib." Contractors from Titan International were also present during the abuses.

"This industry really didn't exist 10 years ago," says Peter Singer, a national security fellow at the Brookings Institution and author of "Corporate Warriors: The Rise of the Privatized Military Industry." A decade ago, mercenary soldiering was less the stuff of corporate America than the inspiration for Soldier of Fortune fantasies. Now, as Singer reported in Salon, the industry generates over $100 billion annually worldwide.

As little known as these companies are to the general public, they are only too familiar in Washington, where they have deployed a different kind of mercenary force -- phalanxes of lobbyists -- along with the ammunition of modern political warfare, campaign contributions. And they have found eager friends, particularly among Republican leaders in and out of Congress.

"The move into the political game tends to happen for three reasons," Singer says. "One, this business is growing. Second, companies that are in other industries move into the sector, bringing influence and lobbyists to bear." Examples include Halliburton and, in the case of private security firms and other companies that provide combat- or intelligence-oriented services, firms like CACI and Titan. Finally, Singer says, "A lot of firms have picked up lobbyists as they've gained a public profile."

Blackwater, the firm that guards Coalition Provisional Authority chief Paul Bremer, and whose men were killed at Fallujah, has hired the well-connected Alexander Strategy Group to guide it through the current publicity storm and help influence Congress on whatever rules are generated to govern private militias in war zones, according to the Hill newspaper.

Alexander may turn out to be a clever choice: Ed Buckham, former chief of staff to House Majority Leader Tom DeLay, R-Texas, is Alexander's chairman. Tony Rudy, another former top DeLay operative, and Karl Gallant, who once ran DeLay's leadership PAC, are also onboard.

Blackwater also works other angles. One of the firm's founders is Michigan native Erik Prince, a former Navy SEAL. His father, Edgar Prince, helped religious right leader Gary Bauer found the Family Research Council in 1988. Erik Prince's sister, Betsy DeVos, is the chairwoman of the Michigan Republican Party. But Blackwater is a relative newcomer to the Washington influence game, especially compared with CACI and Titan, which have been trailblazers.

For more than four years, CACI has employed the Livingston Group and its "strategic partner," Louisiana law firm Jones, Walker, Waechter, Poitevent, Carrere and Denegre, to represent the company's interests in Washington. Since 2000, CACI has poured $160,000 into Livingston and $150,000 into Jones, Walker.

The Livingston who gave the firm its name is former House Appropriations Committee chairman Bob Livingston, the Louisiana Republican designated as Newt Gingrich's successor to the speaker's gavel in 1998. Amid the House debate over the impeachment of President Clinton, Livingston dramatically announced his retirement because of his own sexual peccadilloes. "Livingston is the only former chairman of the powerful Appropriations Committee now in private practice," reads a bio on his firm's Web site.

Livingston's former top staffers, who have joined him in the private sector, also work on the CACI account, according to lobbying filings with the House and Senate. In addition, the two firms employ former legislative liaisons (bureaucratese for lobbyists) from the Navy, Air Force and Coast Guard -- all registered to lobby for CACI.

More than 92 percent of CACI's $843 million in revenues last year came from the federal government -- 63 percent from the Pentagon alone. The company's lobbyists are essential in the continuing effort to grease that wheel of fortune.

Titan's lineup of lobbyists is even broader. Its in-house team includes chairman Gene Ray, a former top Air Force official; John Dressendorfer, a former White House lobbyist under President Reagan who also worked in President Nixon's Pentagon; Lawrence Delaney, who closed out his service to the Clinton administration as acting undersecretary of the Air Force; and, for good measure, Susan Golding, a former Republican mayor of San Diego.

Titan's hired guns include the law firm of Copeland, Lowery, Jacquez, Denton and Shockey, which employs Letitia White, a longtime staffer to Rep. Jerry Lewis, R-Calif., to work on Titan's issues. Lewis, by the way, is the chairman of the defense subcommittee of the House Appropriations Committee. The firm American Defense International, also employed by Titan, includes Van Hipp, a former deputy assistant secretary of the Army under then Defense Secretary Dick Cheney who was later appointed the No. 2 lawyer in the Navy, and Michael Herson, a former special assistant to then Secretary Cheney.

What's more, Titan has engaged the services of NorthPoint Strategies, composed mainly of former top staffers to Rep. Randy "Duke" Cunningham, R-Calif. Cunningham, a former member of the Armed Services Committee, as it happens sits on the Appropriations defense subcommittee as well as the Intelligence Committee.

All told, Titan has spent $1.29 million since 2000 on Washington lobbying. In 2003 alone, it paid NorthPoint $240,000. And its lobbying has paid off. Last year, the company had revenues of $1.8 billion, according to its annual report: "Our revenues from U.S. government business represented approximately 96% of our total revenues for the year ended December 31, 2003."

This revolving door between congressional staffers or retired military personnel and lobbying firms is not circumscribed by the requirements of the House and Senate lobby registration. Most of the private contractors operating in Iraq have high-ranking retired brass in their executive suites. CACI's board of directors, for example, features retired Gen. Larry Welch, a former Air Force chief of staff. Carl Vuono and Ronald Griffith, the president and executive vice president, respectively, of Alexandria, Va., firm MPRI, which is helping to train and equip the new Iraqi Army, are both retired generals.

But preexisting relationships are only one weapon in the Washington operator's arsenal. Money remains one of the most important tools.

Not surprisingly, these companies have been very generous to the Republican Party. Titan's PAC, for example, has contributed a dozen times more money to Republicans than to Democrats during this election cycle: It kicked in $182,000 to Republican committees and candidates, including $10,000 apiece to the leadership PACs of Lewis, Cunningham, Senate Appropriations Committee chairman Ted Stevens, R-Alaska, and House Armed Services Committee chairman Duncan Hunter, R-Calif. (whose leadership group is called Peace Through Strength PAC). Titan's PAC also gave the maximum $10,000 to the campaign committees of Cunningham, Lewis and Hunter. Democrats have received a mere $15,000 from Titan.

In addition, top executives with Titan have contributed in excess of $58,000 to political candidates and committees since 2000, more than $49,000 of that amount going to Republicans. Ray alone gave $28,000, the bulk of it to Republicans. Reps. Cunningham and Hunter each got from Titan executives at least $10,000 (not including the $3,000 given to Hunter's Peace Through Strength PAC). The Democrat who has received the most money from Titan executives is Rep. John Murtha of Pennsylvania, the ranking Democrat on the Appropriations Committee's defense subcommittee.

Some of the private security firms in Iraq are clearly fresh to the political game: Three executives from Triple Canopy -- whose forces fought a pitched battle against Iraqi insurgents in April -- each wrote $2,000 in checks to the Bush-Cheney campaign in March.

While Secretary of Defense Donald Rumsfeld has now testified on Iraqi prisoner abuse -- some of it carried out by workers employed by private firms -- no hearings have yet been scheduled on the widespread use of mercenaries to fill jobs once performed by U.S. soldiers. And deployment of such workers is unlikely to decrease as election year contributions grow: The number of hired mercenaries is expected to double after the June 30 hand-over of "limited sovereignty" to an Iraqi government.