Cate Blanchett, Roberto Benigni, Bill Murray, Iggy Pop and Tom Waits are just a few of the familiar faces that pop up in Jim Jarmusch's 11 vignettes in search of a movie. 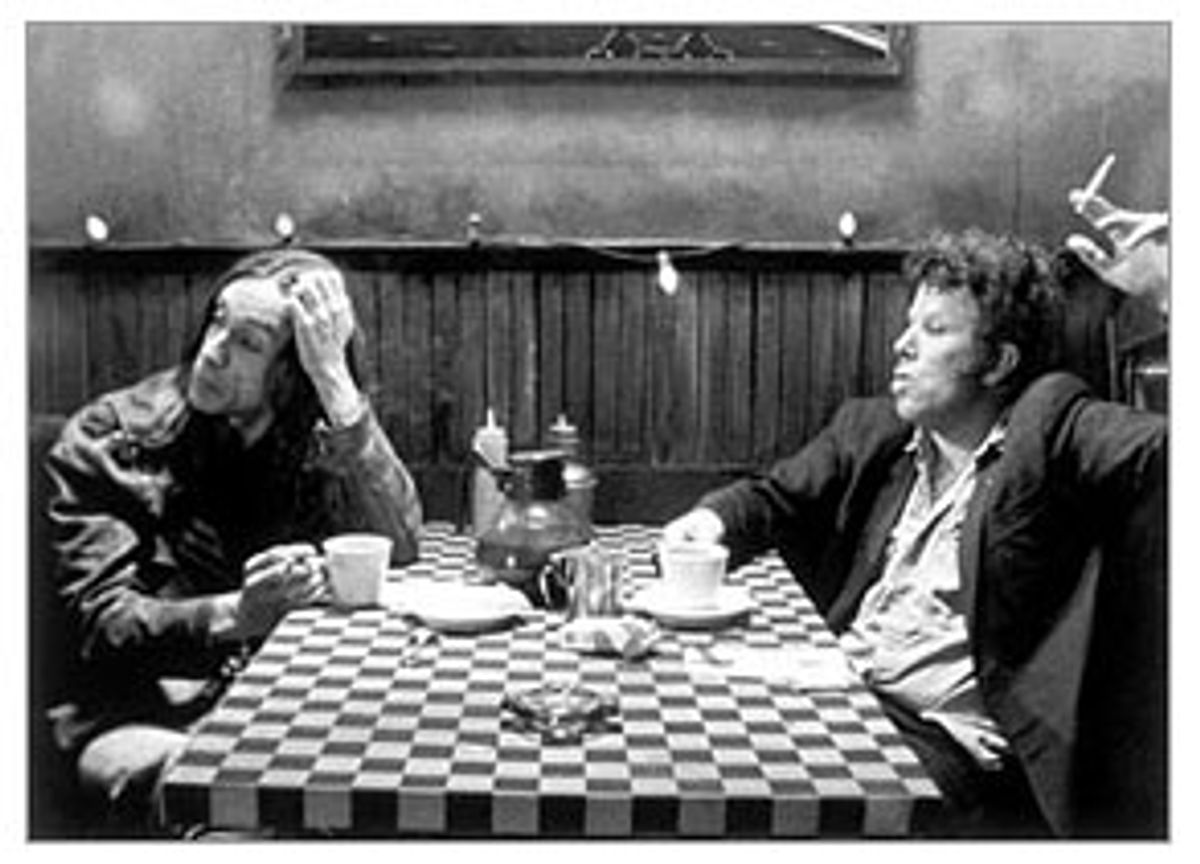 Some of Jim Jarmusch's pictures have such maddeningly irregular rhythms that they threaten to throw your heartbeat off kilter: His 1986 "Down by Law," for example, was the kind of picture that sweeps its audience around like a limp rag doll -- the more rigidly you resisted its lopsided charms, the more likely it was to drive you crazy. But with later pictures like the 2000 "Ghost Dog: The Way of the Samurai" and the superb, lyrical "Dead Man," Jarmusch learned to marshal his storytelling skills without squelching what's individual or interesting about them. His movies tend to move rather slowly, but they manage to hold your attention -- they can be an invigorating narcotic.

"Coffee and Cigarettes" is less one big movie than a coordinated set of mini-movies -- something of a now-and-then knitting project that Jarmusch has put together in bits and pieces over the past few years. (He has another similar project in the works.) Jarmusch both wrote and directed the 11 segments that make up "Coffee and Cigarettes." Each one features two or three characters connecting (or, perhaps more accurately, misconnecting) over cups of coffee and, yes, those much-villainized pleasure-delivery receptacles known as cigarettes.

Most of the characters are played by people you've probably heard of, and the characters they play are something like themselves, and yet not. "Strange to Meet You" features jittery comedian Roberto Benigni and the much drier Steven Wright bouncing their lines off the walls around them more than off each other. In "Somewhere in California," Iggy Pop and Tom Waits butt heads, gently, each finding ways to slight the other's career: Waits brags about being an M.D. and a musician; Pop mentions casually that the coffee shop's jukebox doesn't have any of Waits' songs on it. Waits brags about having quit smoking and then announces, devilishly, that once you've quit, it's OK to start up again -- because, he says, as a way of validating his cheerfully warped logic, "you've quit!" He and Pop then proceed to light up, and the look of pleasure on their faces is almost obscene. ("Coffee and Cigarettes" is, thank God, a movie made for adults capable of making up their own minds about smoking. Former smokers, especially, sometimes enjoy living vicariously, seeing people in the movies do things that they themselves no longer can.)

In "Cousins," Cate Blanchett plays a sweet but vaguely self-satisfied movie star who deigns to meet her punkish cousin Shelly (also played by Blanchett) in the lobby of the hotel where she's doing a junket. Shelly resents Cate's success, and while Cate tries to be sweet to Shelly, she barely hides her condescension. Cate gives Shelly some expensive perfume; Shelly thanks her appreciatively and then asks suspiciously if it's swag; Cate finally admits, defensively, that it is. Their conversation wobbles and weaves, sometimes unsteadily and sometimes sharply; it's unmooring for us as well as for them, but it's funny too.

The vignette format suits Jarmusch: Working on a small scale frees him to explore the varying textures and strangeness of real-life conversations, the way our discourse sometimes worms its way into corners it can't work itself out of, particularly when there are stimulants (in other words, caffeine or tobacco) involved. Certain topics surface repeatedly and randomly: the idea of coffee and cigarettes as a decidedly unhealthy lunch, Nikola Tesla's theory of the earth as a conductor of acoustical resonance, and the practice of freezing coffee in ice-cube trays to make caffeinated ice-pops.

Although these vignettes are unified visually -- they're all in black-and-white and they all have the same gorgeous, silky visual texture -- they were shot by several different cinematographers (Frederick Elmes, Ellen Kuras, Robby Müller and Tom Di Cillo). The resulting movies are similar in mood but visually distinct. Each one takes place in a different coffee shop, usually matched in some way to the characters featured: We see the White Stripes' Jack and Meg White, for instance, in a low-key hipster joint; Waits and Pop slouch in the banquettes of a sleepy, '50s-retro cafe.

The only problem with stringing 11 short films into one work is that the weaker ones recede from memory almost immediately. In "Twins," Cinqué Lee and Joie Lee -- both actors, writers and directors and siblings of Spike -- engage in some blasé Elvis-bashing in a Memphis cafe, and it feels like a tired stunt. But Jarmusch is also able to hit some moments of great humor and beauty: In "Cousins?" an anxiously friendly Alfred Molina tries to tell comedian and actor Steve Coogan (of "24-Hour Party People") that he's done some genealogical research that proves the two of them are related. Coogan responds with little more than a thin smile and a set of condescending remarks about Americans, until he realizes that Molina is friends with Spike Jonze, after which he tries to ooze back into the actor's good graces. The piece is a funny, cockeyed version of the way we think actors behave with each other, although it probably holds more than a few grains of truth.

The most touching vignette is the last one, "Champagne," which features two 60-ish fixtures of downtown New York, actor, director and writer Bill Rice and stage actor and writer Taylor Mead. The two are having a coffee break in the building where they work, although it's not clear what kind of work they do -- they're crouched at a simple table in what appears to be a basement. Mead mentions that he "feels" like the Gustav Mahler song "I Have Lost Track of the World." The two of them hear the music playing faintly around them, or maybe they're just hearing it simultaneously in their heads. Mead perks up and announces that he wants to pretend his coffee cup holds champagne -- he wants to toast all the good things in life, and even great things he missed, like Paris in the '20s. Rice prefers to accept that his coffee is just good, working man's coffee, but eventually he agrees to the toast, holding his cup aloft to New York in the late '70s.

The men don't do anything as obvious as reminisce. They bump against each other with their slight grumpiness, but it seems to us that they're people who have known each other for years, that they're linked by shared memories of some fabulous time and place. Their current circumstances aren't particularly glamorous, but there's an air of glamour about them that their surroundings can't diminish. "Champagne" is a fitting nightcap for "Coffee and Cigarettes." It captures the way small, seemingly insignificant conversations can have the zing of champagne, even when the beverage of choice is really just coffee in a paper cup.