Never the twain shall meet

"Occidentalism" offers a grand theory about why Arabs and Muslims feel the way they do about the West -- but ignores what the West has done to them. 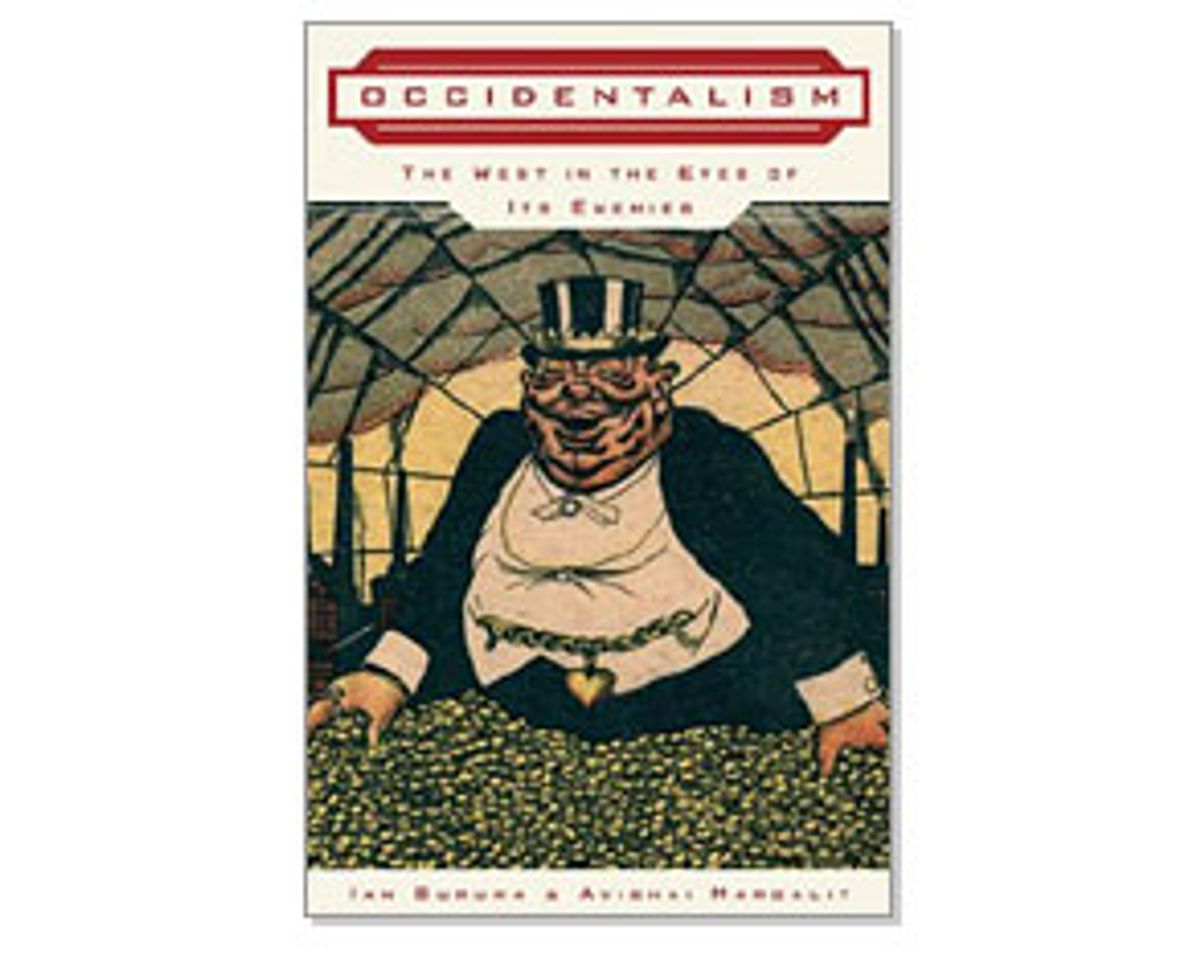 In 1978 Edward Said's landmark "Orientalism" did something that the vast majority of books, even great ones, fail to do: It literally changed the way we understand the world. By developing a system for conceiving and deconstructing the long and tangled relationship between East and West -- a relationship that Said argued was marked, throughout the colonial era, by the West's systematic portrayal of the East as culturally and racially primitive, exotic, backward and inferior -- Said virtually created an entirely new field, post-colonialism, which continues to have profound effects on academia and international politics to this day.

The new book "Occidentalism" expressly positions itself as the Western-looking counterpart to the Said classic. Its authors want us to believe that it, too, will shatter myths, define a new genre of thought and study, and change the way we understand the world.

The authors, Ian Buruma, Luce Professor at Bard College, and Avishai Margalit, a philosophy professor at the Hebrew University of Jerusalem, define "Occidentalism" as "the dehumanizing picture of the West painted by its enemies" -- in short, as the mirror image of Orientalism. "The view of the West in Occidentalism is like the worst aspects of its counterpart, Orientalism, which strips its human targets of their humanity. Occidentalism is at least as reductive; its bigotry simply turns the Orientalist view upside down."

On the surface, there is nothing wrong with this general theory. In fact, serious academic treatment of the gross misperceptions of "the West" held by many in the Arab and Muslim world is long overdue. During summers spent studying in Jordan, I would discuss politics with my Arab friends, who would vent their ire not only at the U.S. government, but also at complacent Americans and their decadent culture. But all it took was a few probing questions to demonstrate that what little knowledge my friends had of America was derived almost wholly from the Hollywood movies and TV shows they devoured. ("No, Omar, all American women do not have sex on the first date. Unfortunately.")

The current academic climate, perhaps due to lingering political correctness, tends to stifle honest, hard-hitting analysis of the flaws of the Arab world. The time is definitely ripe for a fair, evenhanded evaluation of the Middle East's perceptions of us, and the roots of those perceptions.

Which is why "Occidentalism" is so disappointing. Instead of providing a nuanced consideration of the conflicting forces at work within Middle Eastern society -- where people denounce American "imperialism" even as they gobble up the latest American fashions in everything from clothing to cars to footwear -- "Occidentalism" is an unconvincing, overly theoretical attempt to fit contemporary anti-Western ideologies into a grand historical pattern.

Radical Islamists, the authors say, think America is a country of money-obsessed, citified, extravagant cowards -- heartless, godless, soulless, honorless, virtueless, and pretty much every other -less you can think of. For anyone who has watched one of those grainy videos of Osama bin Laden calling Americans money-obsessed, citified, godless, extravagant cowards, this will hardly come as a revelation.

The original part of Buruma and Margalit's thesis is their assertion that the ideology of contemporary terrorists is merely the latest incarnation of a long history of anti-Western beliefs -- a history that can be traced, they claim, through Imperial Japan, communist Vietnam, Maoist China, Russia during the time of the czars and the communists, all apparently originating with Germany under both Kaiser and Fuehrer. Substantive treatment of the Middle East doesn't really begin until the second-to-last chapter.

Had "Occidentalism" managed to show that these vastly divergent ideologies, in different regions and scenarios, were actually connected, it would have made a significant contribution. But the connection is poorly illuminated in this 165-page book -- a bit short to cover adequately the immense amount of history in question. Aside from their own intriguing insistence that most of these anti-Western ideas were, ironically, actually imported from the West, Buruma and Margalit offer little concrete proof of a causal relationship, merely demonstrating some superficial similarities between the different cases and citing a few philosophers and commentators to back up their claims.

Finding similar anti-Western views in different countries and continents does not mean very much. As the authors themselves admit, it's easy to think of many examples of peoples or nations in the West who define their enemies as sophisticated cosmopolitans devoid of respect for culture or heroism or God. (Look at how the South characterized the North during the Civil War, for example.)

"Occidentalism" treats hatred, intolerance and misunderstanding in a highly abstract way, as if they were vague philosophies somehow transmitted from one group of people to another, like mysterious plagues that have little correlation with actual facts on the ground. Aside from a few passing mentions, the authors seem loath to address how the core ideas of Occidentalism found such fertile soil in the minds of a broad cross section of Middle Easterners, not just the academics and the pundits. Even if the general form of Occidentalism was sparked hundreds of years ago by political theorists in China or Germany, why do those beliefs continue to hold such sway in the Arab world now? And why are they leading to terrorist attacks of the kind recently witnessed in Madrid, Spain?

These crucial issues are oddly left until the last chapter of the book, also one of the shortest chapters. Here, Buruma and Margalit insist that Occidentalism really has very little to do with what the West has done to the Middle East since the beginning of the colonial era. They go as far as to quote Theodor Herzl, the father of modern Zionism, as he condescendingly writes about how the Jews of Europe will bring enlightenment to the ignorant savages of the Middle East. According to them, Herzl's racism was mere naiveté, a foolish, optimistic belief in democracy, redemption and liberalism that would tragically never be appreciated by the backward natives of the Holy Land.

Buruma and Margolit maintain that the West's history of racism, colonialism, exploitation and oppression of Arabs and Muslims has little to do with why so many Arabs and Muslims hate the West. "To blame the barbarism of non-Western dictators or the suicidal savagery of religious revolutions on American imperialism, global capitalism, or Israeli expansionism is not only to miss the point; it is precisely an Orientalist form of condescension, as though only Westerners are adult enough to be morally responsible for what they do."

Attacking as Orientalists those who claim that Arab and Muslim rage have a political basis is a clever maneuver, reminiscent of Deputy Defense Secretary Paul Wolfowitz's insistence that he and his fellow hawks, unlike the condescending liberals who opposed the Iraq war, believed that Arabs were ready for democracy. But it is a mere dodge. To assert that there are historical reasons for the anti-Western views held, or actions taken, by many Arabs and Muslims is not to deny them moral responsibility, or for that matter to place all the historical blame on the West: It is simply to acknowledge that ideologies and acts of political violence do not exist in a vacuum.

The villains in Buruma and Margalit's book are Arab dictators whose perversions of Western concepts of nationalism and socialism have led to inept, corrupt, hypocritical regimes. Frustration with these regimes, they argue, has bred a fatalistic version of Islamist extremism that seeks to violently overthrow the entire current world order, both West and East. Though this theory is hardly original enough to merit a whole book -- commentators such as Thomas L. Friedman have been making a similar point for years -- there is obviously some truth in it. No one is defending the totalitarian rule that prevails in much of the Middle East, or saying that the existence of these corrupt, backward and totalitarian regimes can be wholly blamed on the West. But Buruma and Margalit fail to sufficiently acknowledge that the West does bear much responsibility for the Middle East's pathologies, and thus for the unflattering images of the West held by its inhabitants.

The list of Western misdeeds is long. Harsh and undemocratic governments like Egypt and Saudi Arabia, and the better-run Jordan, simply wouldn't exist if they weren't propped up by Western funds and political support. But the West's meddling in Arab/Muslim affairs runs much deeper, from the secret Sykes-Picot Agreement that divided up the post-Ottoman Middle East booty between France and England, to the Balfour Declaration, to the U.S.-backed coup that removed legitimately elected Iranian leader Mohammad Mossadegh from power in 1953, and on and on. This meddling has caused great resentment, frustration and anger among Arabs and Muslims.

Buruma and Margalit deserve their due. Just because the West dominated and oppressed the East doesn't mean that all of the East's negative images of the West are historically grounded or even rational. Free-floating, ahistorical anti-Western ideas of the sort analyzed in "Occidentalism" can combine with political grievances: The two aren't mutually exclusive. But the fatal flaw in this book's attempt to treat Occidentalism as a mirror image of Orientalism is that there is a fundamental difference between ideologies of the dominant and those of the dominated. The two sides simply are not, and never were, equal.