Yes, it's for the kids, but this animated sequel may be one of the most mature movies about adult relationships ever made. 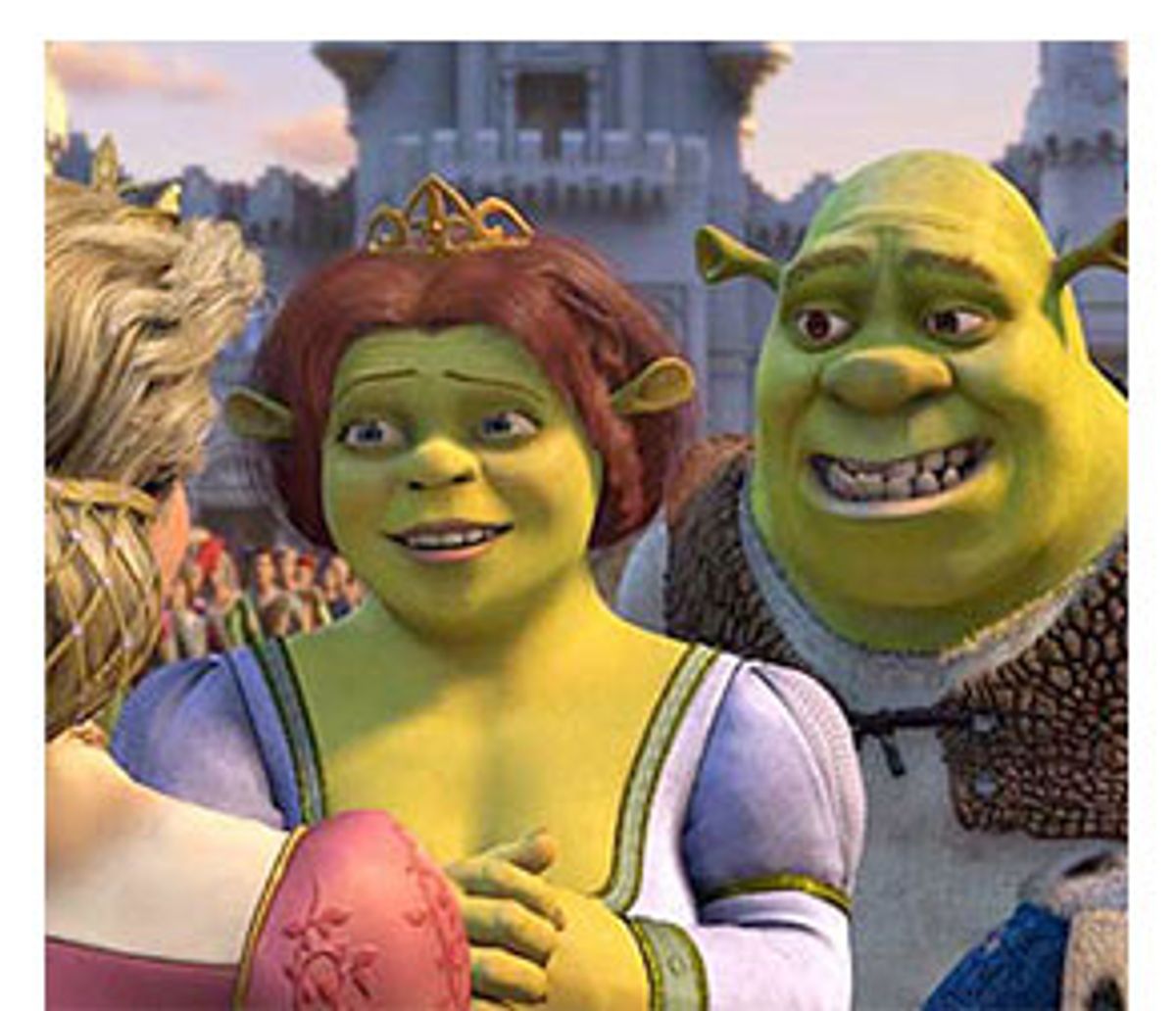 Forget rescuing princesses from fire-breathing dragons. Everyone who has ever tried it knows that marriage (official or un-) is the most dangerous adventure known to man- and womankind. Every year, millions attempt it, and millions of others flee from it in remorse and defeat. So while I suppose there are children out there who are excited about the prospect of "Shrek 2," my hunch is that, by and large, it's really their parents who are brimming with curiosity about the fate of the cantankerously likable ogre Shrek and his new bride, Princess Fiona, now that the pair face the grim, thankless task of attempting to live happily ever after.

Is it going too far out on a beanstalk to say that "Shrek 2" is one of the most mature movies about adult relationships ever made? At the very least, I think it's accurate to say that among movies aimed primarily at children, "Shrek 2" is redolent of a specifically adult wistfulness -- it's a happy picture, but one that's nonetheless aware of the sometimes uncomfortable stretching and contorting that two people have to endure when they attempt to build a life together.

"Shrek 2" may also be the first animated feature about, among other things, the unpredictability of sexual attraction. If the message of the first "Shrek" was the wearisomely threadbare "Real beauty is on the inside," the message of "Shrek 2" is the significantly more complicated "You probably don't realize it, but the chubby, pimply kid who picks his nose in homeroom may quite possibly grow up to be much better in the sack, and a nicer guy, than the Troy Donahue look-alike everybody swoons over." "Shrek 2" never suggests we should ignore good character in favor of animal attraction. But just as significantly, it acknowledges that people (and ogres) aren't just walking compendia of noble inner virtues. Looks do matter to us -- it's only when we get hung up on the conventions of good looks that we get into trouble. Fat or thin, conventionally pretty or not, flesh-toned or green: "Shrek 2" believes in the erotic possibilities of everyone.

"Shrek 2" opens with the honeymoon of Shrek (voice provided by Mike Myers) and Fiona (Cameron Diaz): They've rented a gingerbread house by the sea, and they roll around on the shore, "From Here to Eternity"-style, enjoying each other in a way that's NC-17 in spirit if not in explicitness. ("Shrek 2" is, incidentally, rated a relatively chaste and child-friendly PG.) Shrek and Fiona share luxurious mud baths together, giggling cheerfully if one of them should pass gas. (Like its predecessor, "Shrek 2" has its share of fart and poo jokes; my favorite touch is the magic-potion bottle marked with the incongruous legend "Toadstool Softener.")

But Shrek and Fiona's fairy tale-honeymoon happiness can't last forever. After they return to their ogre hut, ready to start their everyday life together, they receive an invitation from Fiona's mother and father, the king and queen of Far Far Away (played by John Cleese and Julie Andrews). The king and queen have not met Fiona's husband, and they want to throw a wedding ball in honor of the couple. So Shrek and Fiona travel to the kingdom -- with Donkey (Eddie Murphy) making loud, loud lip-smacking noises in the back seat of their carriage all the way -- only to discover that Fiona's parents couldn't be more disapproving of Shrek.

Their disapproval is blatant and hurtful: As Shrek and Fiona approach the parental castle, the king suggests to his wife they go inside, turn off the lights and pretend they're not at home. We learn that, unbeknownst to his wife, the king had made a deal with the local, and very power-hungry, fairy godmother (Jennifer Saunders, of "Absolutely Fabulous"): Her son, the fussy, preening Prince Charming (played with hilarious, bubbleheaded insouciance by Rupert Everett), was supposed to be the one to rescue Fiona from the spell that made her an ogre in the first place -- the two of them would then be joined in marriage. Shrek's appearance on the scene messed up the devious duo's meticulously laid plan, and they scheme to find a way to remove him from the picture.

Meanwhile, though, unsettled by the chilly reception they've gotten from the king and queen, Fiona and Shrek bicker and spar. Fiona, even though she's a grown-up, and even though she knows she's chosen the right guy for her, can't help wanting their approval. Shrek fears, for the first time, that he really doesn't measure up. Fiona, frustrated and confused by her own feelings, seizes upon his stubbornness and crankiness. The two hurl accusations at each other: "I made changes for you, Shrek," Fiona says bitterly at one point. "Think about that."

This is a peculiarly stinging type of fairy-tale discord, and while it may be geared toward adults, I don't think it's beyond children to understand its essential nature: While "Shrek 2" doesn't rub kids' noses in their worst fears the way many of the classic Disney pictures do ("Bambi" is Exhibit A), it doesn't talk down to them, either. "Shrek 2" was directed by Andrew Adamson (also one of the directors of "Shrek"), Kelly Asbury and Conrad Vernon. Its script is by Adamson, Joe Stillman, J. David Stem and David N. Weiss, and I only wish that there were more live-action pictures written with as much careful shaping. Shrek leaves the castle on an adventure that, he hopes, will help Fiona realize she made the right choice -- he thinks she has doubts about having married him, not recognizing that her love for him is the one thing she's certain of. But "Shrek 2" doesn't feel heavy-handed or lesson-logged: If anything, it has a lighter touch than its predecessor, even though its themes are more complicated.

The picture is clever and vivacious -- at times, like the first "Shrek," it seems a bit taken with its own precociousness. But its moments of sheer inventiveness can still catch you off-guard, and some of them are wittily poetic. The streets of Far Far Away are lined with Beverly Hills-style mansions (the names of Cinderella and Sleeping Beauty are wrought right into their curly iron gates) and swanky stores like the bow-and-arrow supply joint Versarchery (its sign even uses the Versace typeface). As Fiona gazes out a window, unhappily, we see the kingdom's named spelled out on the hills behind her, just like the Hollywood sign. "Happiness is just a teardrop away!" reads the business card that the meddlesome fairy godmother gives to Fiona, after trying to force her into an extreme makeover she doesn't want in the least. "Shrek 2" doesn't set itself up as a sanctimonious indictment of Hollywood shallowness, but it shows a limited amount of patience with Hollywood's preoccupation with looks, style and status. They're hollow things to be pricked, like balloons, but the movie doesn't make the mistake of building dopey homilies around them.

Like the first "Shrek," "Shrek 2" mixes and matches a panoply of fairy-tale characters: Pinocchio appears in a daring rescue mission -- he's lowered by his strings into a dark hole, to the strains of the "Mission: Impossible" theme. There are three blind mice who do little more than run around and bump into things, but they're still hilarious in an admittedly Three Stooges kind of way. The best character of all is the orange tabby Puss in Boots (played with impeccable timing by Antonio Banderas), who sashays and saunters through the picture as if he owns it -- but who also looks suitably embarrassed when, at an inconvenient moment, he hacks up a large fur ball.

There's only one thing wrong with "Shrek 2," and it's a pretty major thing: Its hyperrealistic animation threatens to hold us apart from the intensity of the story, instead of drawing us into it. I had the same problem with the first "Shrek": While I can tolerate the animal characters, the animated human figures, with their airbrushy skin tones and glassy-looking eyes, give me the willies. The look-at-me technique of "Shrek 2" detracts from, instead of enhancing, the buoyancy of the direction and the writing.

Still, I gave in to "Shrek 2", perhaps partly because this time around I at least knew what to expect. Computer animation still leaves me cold, but the sensibility behind "Shrek 2" doesn't. For a "children's" picture, "Shrek 2" delves into some pretty complicated ideas about parental relationships: While many kids' movies pit the cluelessness of parents against the simple wisdom of children, "Shrek 2" is the first kids' movie I can think of that recognizes that even after we're grown up, our parents don't always behave as we'd like them to (or as they should). Their age, or ours, has nothing to do with what we like to call maturity.

And then there's the scene that defines the nature of the bond between Shrek and Fiona. It's not giving too much away to tell you that Fiona has a chance to become as "attractive" as Prince Charming is "handsome," and to trade her beloved green fatso for this tall, thin, movie-star-like fellow. But when Prince Charming tries to kiss her, she literally recoils from him. It's her Shrek she's longing for, the guy who woke up on the other side of her bed not so long ago, scratching his bulbous stomach and shuffling along in his undershorts and socks.

There's no explaining why we fall for, or stick with, the people we do. "Shrek 2" isn't one of those thinly veiled conservative sermons, the kind of thing that stresses how grown-ups should stick together for the sake of the children, or for God, or for the good of society at large. It's about grown-ups sticking together for the sake of themselves. It's a movie about both the selflessness and the selfishness of love. It's about how we want whom we want -- even if he's fat and green.