Thou shalt not steal

Christian teens are just as eager to file-swap copyrighted music as any other youngsters. But if the word of God gets spread, would Jesus give a damn? 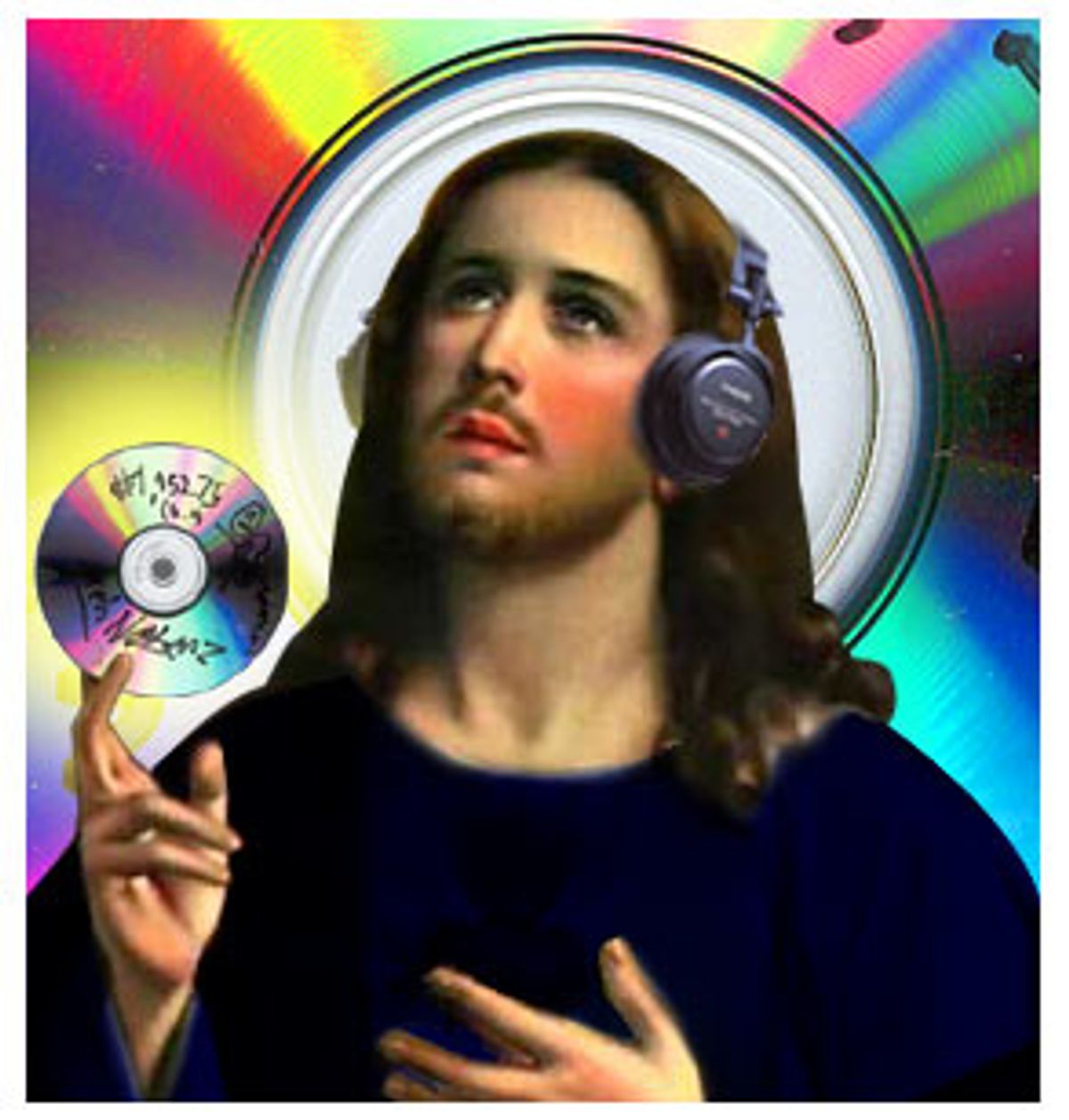 Jonathan McPherson, 23, believes that file-trading copyrighted music is a sin.

Last year, the computer science graduate student at the University of California at Davis wearied of explaining to his friends -- many of whom, like him, are Christian -- why he couldn't accept CDs of ripped tunes. So he published a spirited critique of the practice on his Web site, titled "On File-Sharing Networks and Civil Disobedience: A Christian Perspective."

McPherson, whose musical taste runs from electronic ambient to Celtic music and piano ballads, argues that even if Christians don't agree with current copyright laws, they still have an obligation to follow them, because they're the law of the land. With a nod to Romans 13, he writes, "Our government has been established by God, and we ought to obey its rules unless they conflict with God's rules ... Is the pleasure of entertainment worth the moral price of lawbreaking? I don't think so."

The record companies would undoubtably love it if today's music-pirating teens switched gears and came around to McPherson's viewpoint. But their problem is that McPherson's tough line on the morality of zapping around fave Enya tunes puts him firmly in the minority, even among devout believers. Because it doesn't make any difference if you prefer gospel or death metal; you're still just as likely to file-swap.

A recent study commissioned by the Gospel Music Association found that born-again teens file-trade just as much as their not-saved peers.

"I think that we perhaps naively hoped that the Christian teens would have been taking the moral high road," says John W. Styll, president of the Gospel Music Association. "Among teens, they just don't see it as a moral issue. Ninety percent of them don't see illegal downloading as wrong. It may be illegal, but everyone is doing it." A survey of 1,448 teenagers, including both Christians and their peers "of other faith commitments," found that 80 percent had engaged in one type of music piracy or another in the last six months. Among Christian teens that number was nearly the same -- 77 to 81 percent.

And in perhaps the most chastening blow, in April the most widely available pirated film on the Internet was "The Passion of the Christ." The digital piracy tracking firm BayTSP found 36,693 copies of the film free for the taking, putting it well ahead of April's runner-up for the ignominious honor, "21 Grams."

The Gospel Music Association, along with its affiliated group the Christian Music Trade Association, has responded to its flock's cavalier attitude about file trading with a new public-service campaign, hoping to appeal to a churchgoer's sense of right and wrong. The slogan: "Music Piracy: Millions of Wrongs Don't Make It Right."

The campaign will complement the most recent wave of lawsuits, targeting 477 alleged illegal file sharers, unleashed by the Recording Industry Association of America. But Styll thinks that his group can spread a message about file sharing that even the harsh stick of lawsuits cannot: "It's more than just illegal. It's immoral. It's breaking the laws of the land, and it's stealing from people, and you shouldn't do it," he says.

But is swapping really such a terrible sin if it spreads the word of God? And can Satan really be involved in the sharing of an Amy Grant hit single?

David Kinnaman, vice president of Barna Research, the market research group that conducted the file-swapping study for the Gospel Music Association, thinks that it's going to be tough for parents, record companies and even church workers to convince teens to stop swapping music with their friends.

"What you have to understand about teenagers is there is this hierarchy of moral decision making," says Kinnaman, who specializes in Christian research, and has done projects in the past for the Campus Crusade for Christ, the Billy Graham Evangelistic Association and Focus on the Family. "What's more important, my friends or the record companies? It's a simple choice for them."

To the teens in the Barna study, "hooking up" a friend with a copy of your new CD is like giving a pal a free Coke if you work at McDonald's -- no big deal, and an accepted, even expected sign of friendship.

"Being faithful to your friends, giving them something for free, is more important than any kind of moral allegiance to a record company. Whether a teenager is a committed Christian, of a different faith or just has no religious affiliation, some of the patterns of how they make decisions transcend religious input," Kinnaman says. He believes that to change those kids' attitudes, you'd have to somehow influence those networks of friends, not just tell the kids that what they're doing is wrong.

Another complication: For some Christian kids Barna studied, sharing the religious hits that express their faith is their way of spreading the word. "They wanted it to be part of their ministry. They wanted to share some of the positive messages from their music with non-believers. It's an evangelistic impulse." He compared it to the old saw about the stolen Bible: "If someone came and stole my Bible, I'd be happy that they stole it, because they needed it."

Even McPherson, the Christian computer scientist who takes a hard line on file sharing, has mixed feelings about the trading of religious movies and music. When he heard that "The Passion of the Christ" was the most widely available pirated movie on the net in April, his e-mail response was to quote the following scripture: "The former preach Christ out of selfish ambition, not sincerely, supposing that they can stir up trouble for me while I am in chains. But what does it matter? The important thing is that in every way, whether from false motives or true, Christ is preached. And because of this I rejoice" (Philippians 1:18).

McPherson applies the verse to movie-trading bandits as follows: "Is it sinful to copy 'The Passion of the Christ'? Certainly it is. But instead of shaking my head and saying, 'What a lot of sinners those file traders are,' it would be better to, like Paul, rejoice that Christ is being preached through the film. It is not morally inconsistent to simultaneously state that copying the film is wrong and yet rejoice that God is using even sinfulness to get the word out about His Son."

Styll maintains that many teens who buy Christian music don't even realize that an artist might object to a copy being burned: "It's clear from the number of burned CDs that are brought to artists to sign that they just don't have a clue. They think: If it's there, it must be legal. If it was illegal, why wouldn't they shut it down?"

Gospel, which represents 7 percent of the domestic record market, for a total of between $700 million and $800 million in sales in the U.S. per year, experienced a 5 percent decline in sales in 2003, says Styll. But sales are still up 10 percent over the last five years, which is more than the music industry at large can say.

The best hope for Christian music publishers might reside in going after a completely different sin. The "Millions of Wrongs Don't Make It Right" campaign soon to be showing up on Christian radio stations, Christian retail stores, church literature, and religious magazines and newspapers will target not just kids, but their parents. The literature will also stress the pornographic content available on peer-to-peer networks. "I think that within the church that's a hot button," says Styll. "If they don't care about the music thing, they're going to care about that."