From "Gladiator" to "The Passion" to "Troy," nothing screams "epic" like an exotic-sounding, ululating female singer. 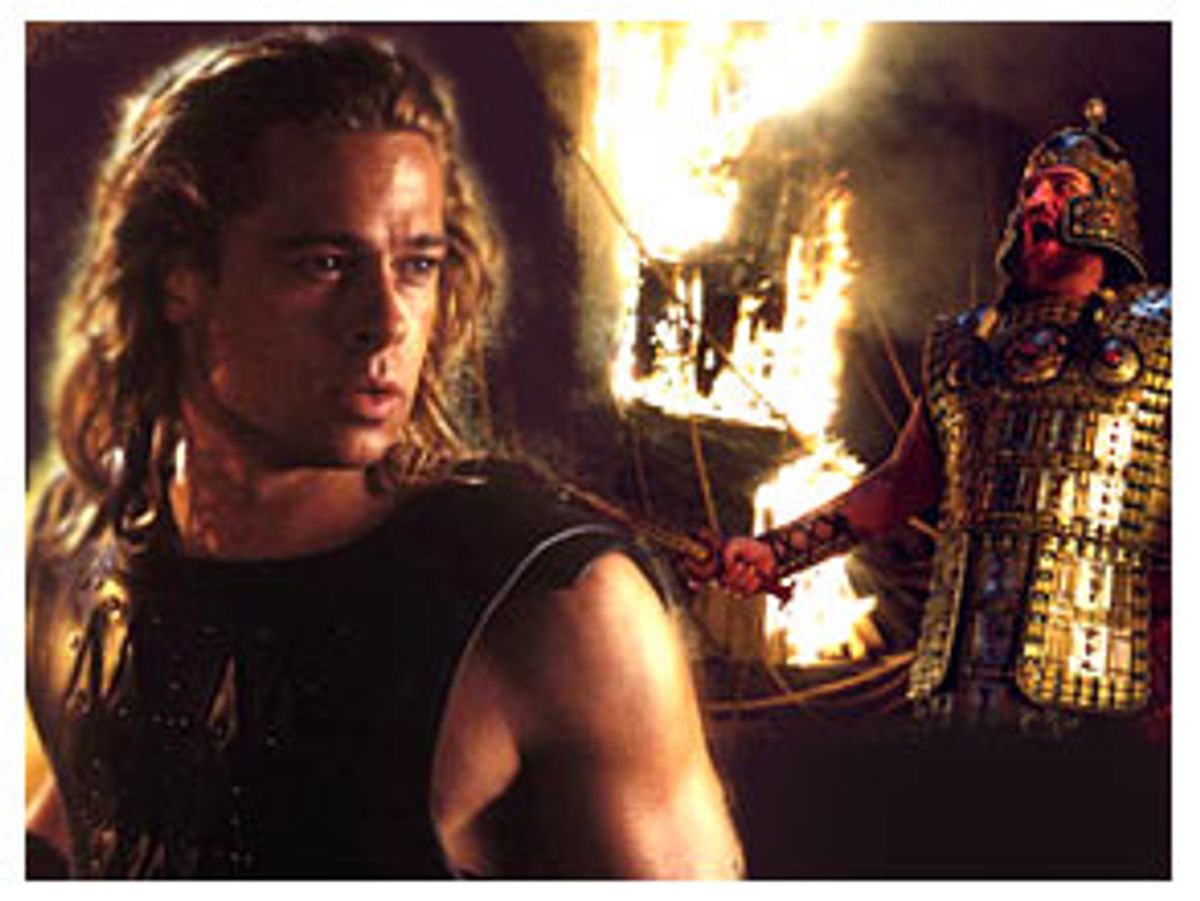 While sitting through "Troy" last week my attention wandered to the film's soundtrack, the last resort of the jaded and popcorn-less. Soon, from the score's generic, thundering drums and sawing strings arose a lone female voice chanting in a nameless tongue, pouring out her melodious lament like a widow over a fresh grave. If "Troy" were the only movie that I'd seen in the past five years, I would have been deeply moved by this exotic, angelic voice. But like any Blockbuster regular, I instantly recognized this woman's wrenching cry as one of the most recklessly repeated musical motifs in recent cinema history: the vaguely ethnic wail.

The story really took off in 2000 with a quiet indie release called "Gladiator." Ridley Scott's Oscar-winner opens over a golden wheat field through which strides a haggard but homebound Russell Crowe. Slowly, a low female voice begins to separate itself from the murmuring strings. In lilting half-steps, the exotic melody rises skyward. It's foreign, but comforting. The woman's words are unidentifiable -- Arab? Indian? Bulgarian? -- yet speak clearly of home and family and long-awaited happiness just beyond reach. Throughout the film, each time Crowe dreams of this far-off resting place, the plaintive vocal returns, even as he finally joins his family in the afterlife.

Hans Zimmer wrote the "Gladiator" soundtrack, and is credited, along with vocalist Lisa Gerrard (formerly of Dead Can Dance), with delivering the vaguely ethnic wail to the masses. Five years later, the wail now makes more appearances in Hollywood "epics" than the requisite heat-of-battle beheading. Any movie with a foreign setting is a shoo-in for a wail or two -- "Tears of the Sun," "Black Hawk Down," "The Four Feathers," "The Passion of the Christ" -- although stateside flicks aren't immune. Probably the oddest recent wail sighting came in Danny Elfman's score for "Hulk," which featured the jolly green giant skipping through the Nevada salt flats to a quasi-Arabian rhythm section and a spirited female screamer of dubious descent.

John Debney, composer for "The Passion," admits that the wail is a full-blown fad, like many other movie music trends that came before it. Television and film music from the 1980s was stuck on the "Miami Vice" sound: repetitive, synthesized riffs over repetitive, synthesized percussion. In the 1970s, it was the saxophone (think "Taxi Driver"). In the '50s, the UFOs massed overhead to the eerie squeal of the theremin. Now, Debney says, the sound "du jour" is the exotic, warbling, ethnic "female vocal" ("wail" is so ugly). Has it been overused? Sure, says Debney. Has it become a cliché? Probably. Should it be banned from movies forever? Let's not get carried away.

There's a fair amount of wailing in Debney's score for "The Passion," performed by vocalist Lisbeth Scott, who despite her white-bread name, assures me she's half-Armenian. This being "The Passion," however, the wailing is sung in actual Aramaic that purportedly means something. As for the authenticity of the music, that's a different story. Debney meticulously researched ancient, traditional Jewish music for several days before declaring that it was too boring for words, even Aramaic words.

"I found that it wasn't as interesting as some of the other ethnic traditional music," Debney says. Director Mel Gibson couldn't agree more. "He wanted a potpourri of a bunch of stuff," says Debney, so the two men started throwing in pinches of Indian and Arab until Scott's ululating "female vocal" packed the proper emotional punch: wrenching, soulful anguish with just the right blend of international flavor.

Don't be confused. Debney and other composers aren't going for accuracy at all costs. It has to sound good first. This is Pier 1 ethnicity; chipotle chicken sandwich ethnicity; and that's OK. It's no accident that vocalist Scott owns her own record label that produces "pop/new age/devotional" music as well as CDs meant to accompany healing, meditation and yoga. The big-screen wail is only a small part of a growing world-music movement that surfaces in Sting songs and car commercials, and drifts idly out of pseudo-hip sidewalk cafes. The vaguely ethnic sound is so popular because it hints at the sexy unknown, the safely dangerous stranger, or as Debney says, because "it's just pretty cool stuff."

Beyond sounding "cool," Scott says that vocal performances like hers in "The Passion" are so coveted by filmmakers because they hit audiences "right in the heart." The human voice is the most emotive of all instruments, and professional wailers have the uncanny ability to set raw emotion to song. When done right, the wail can add palpable (if largely unregistered) emotional weight to a scene. It can mirror a mourning lover's tears, echo a rallying battle cry, or sustain a horrified shriek.

Le Mystere des Voix Bulgares, a Bulgarian women's choir who debuted their powerful, vibrato-less, nasal wails on a 1990 self-titled release, have become a soundtrack staple, featured most recently in the HBO series "Carnivale," in which a mixed bag of Old World misfits populate a 1930s American circus. For a funeral scene, the show's music supervisor, Alexandra Patsavas, needed music that could portray "a primal feel ... that breast-beating, mourning thing," and turned to a track from Le Mystere, which, she said, pulled the double-duty of sounding both authentically Eastern European, and "so incredibly sad."

I have to admit, hearing so many music professionals defend the ethnic wail's effectiveness made me reevaluate my original gripe. So what if the music doesn't always perfectly match the time period or ethnicity? So what if the Hulk doesn't live in the Sudan? The only thing that matters is the emotional impact of the music, right? Who cares if we've heard this vaguely ethnic wail thing a million times already? It works!

Which brings us back to "Troy." Composer James Horner of "Titanic" fame was brought on to write the "Troy" score six weeks before the film's premiere. The previous composer, Gabriel Yared (who won an Oscar for his work on "The English Patient" score, which featured some pre-"Gladiator" wails), was unceremoniously dropped after a test audience found his work "too old-fashioned." With so little time to whip up an original score and record it, one can't completely blame Horner for his patently unoriginal results. Excuses aside, "Troy" is rife with wailing, from battle scenes to funeral scenes to Brad Pitt showing his right butt cheek scenes. And despite the astonishing talent of Horner's vocalist, the Macedonian-born Tanja Tzarovska, it's simply too much.

While Horner's time crunch is not uncommon, a far more serious threat to movie music originality comes in the form of the "temp track" or "temp score." When most directors are editing together material for test screenings, they cobble together a temporary score from bits and pieces of preexisting, popular film scores to fill in for their unfinished (or often unstarted) soundtrack. What happens, of course, is that the director hears this music so many times that he falls in love with the temp score. Debney calls this interloper soundtrack the "bane of [a composer's] existence, because most of the time we're then forced to copy the temp score." And with the next film, the cycle repeats itself, until what was once a cool new musical idea has become an overplayed fad.

And that's when the wailing stops working, when audience members become conscious of hearing something for the hundredth time, as I did, and become disconnected from the on-screen moment (although in the case of "Troy," they lost me in the opening credits). Debney hasn't seen "Troy," but tells me that after a colleague returned from a screening he announced, "I think we've had enough of the female vocal thing now ... for a while." Apparently, somewhere on an Aegean beach, among throngs of extras in leather minis, a musical fad was trampled to death. "I think, like anything," Debney says, "it just gets old."

Dave Roos is a freelance writer living in Guadalajara, Mexico.