Every year, Fleet Week brings a gaggle of oversexed seamen to New York City. Are they desperate enough to lust after wax statues of J.Lo and Julia? 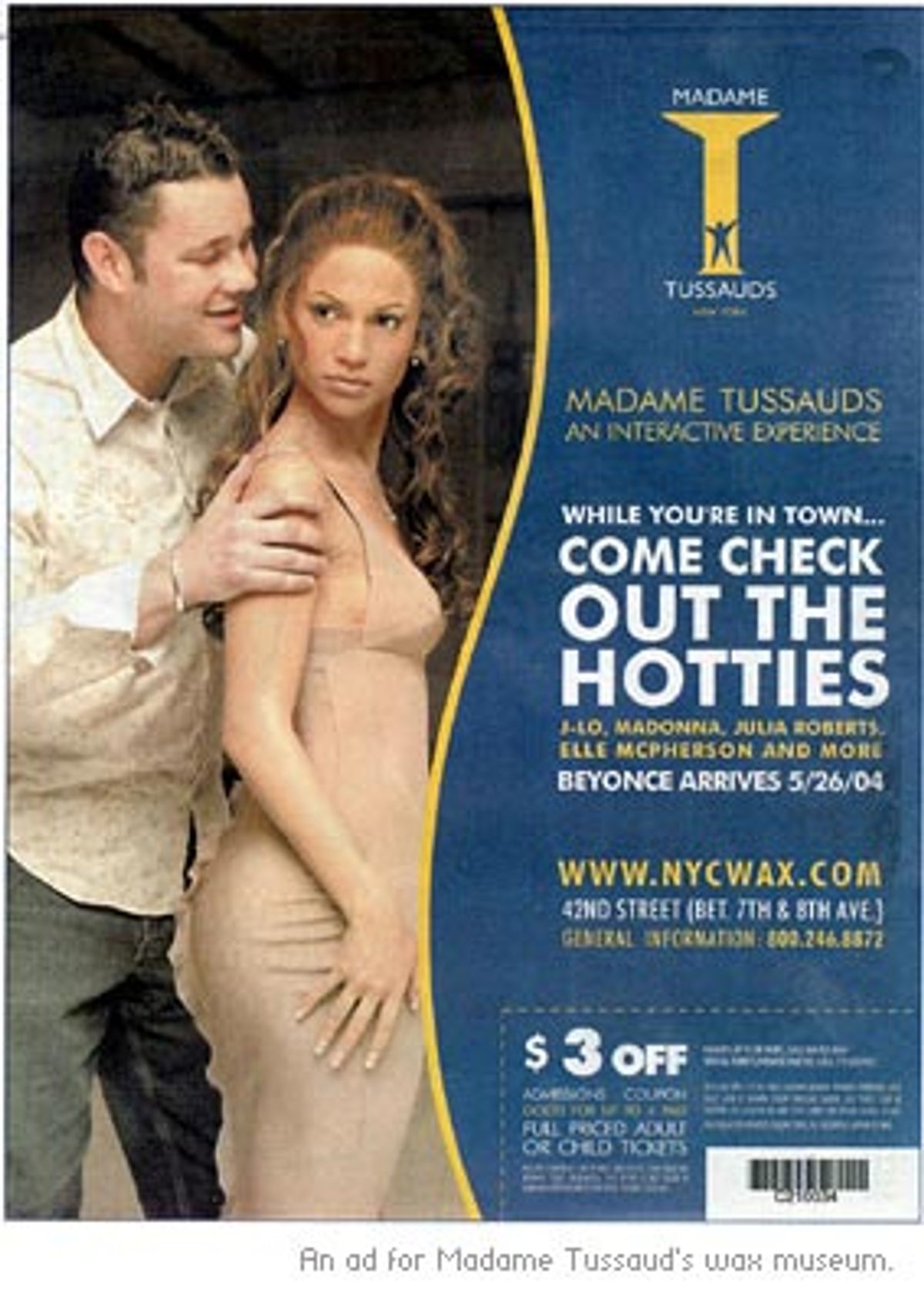 It's Fleet Week here in New York City, the annual lead-up to the Memorial Day holiday, when dashing seafarers from the Navy and Coast Guard disembark on Gotham's shores to let down their hair, see the sights -- and get themselves laid! It's a tradition that has been memorialized in movies like "On the Town" (from before Fleet Week was an officially designated event) and, more recently, the "Sex and the City" episode in which all the characters but Carrie flashed their ta-tas for our brave Men in White.

Fleet Week includes a bunch of patriotic and super-manly activities: wreath-layings and 21-gun salutes, fast jet planes and arm wrestling, lots of historic frigates clogging the harbor, and that weird apotheosis of phallic power where big boats spray impressive jets of water all over the Hudson. But that's just the official stuff. Unofficially, it's due to be a banner week at dance clubs and strip clubs, as the Navy and Coast Guard's contingent of straight men get their chance at sexual release after months of being cooped up together.

So what's a girl to think when she opens up the special Fleet Week section of the New York Post on Monday and finds a full-page ad for Madame Tussaud's wax museum that makes the place look a celebrity call-girl service for necrophiliacs? The advertisement, on Page 2 of the Post's 12-page pullout section listing the week's scheduled activities, features the image of a youngish man with questionable hair grasping a Jennifer Lopez wax figure possessively. Lopez looks petulant, perhaps even pissed off, as the eager visitor leans his head toward hers, his meaty paw on her upper arm, his trunk and torso just a few breaths away from her ample rear quarters. To the right of the image are the words "Madame Tussauds: An Interactive Experience." And below, the invitation, "While You're In Town ... Come Check Out the Hotties: J-Lo, Madonna, Julia Roberts, Elle McPherson and more. Beyonce Arrives 5/26/04." At the bottom of the invitation is a coupon for $3 off admission to the museum.

The message seemed clear enough. In a mind-blowing embodiment of the objectification of women, Madame Tussaud's seemed to be offering sailors who were perhaps not lucky enough to score flesh-and-blood booty a chance to dry-hump celebrity wax figures.

"No, no, no, nooooo! Not at all!" exclaimed a museum spokeswoman when contacted about the implication of the ad's text and image. "He's not feeling her up! He's whispering in her ear!" Right. From behind, and with his hand on her arm. "No! He's whispering in J-Lo's ear because she's interactive!" Indeed, a check of the Tussaud's Web site confirms that the Lopez figure is built so that, according to the online text, "A whisper is all it takes! ... Now is your chance to tell J.Lo all the things you've ever wanted, and when you do, she will blush just for you." So according to the Web site and the spokeswoman, all that's happening in the Fleet Week ad is that a man is whispering into J.Lo's deaf waxy ear about all the dirty things he wants to do to her unmoving body until she turns red for him.

But it's simply not the implication of the advertisement, which doesn't mention whispering or blushing parts -- just the "interactive" and "hotties" parts. "We're really not encouraging sexual innuendo," said the spokeswoman. "We're just saying come check out the attractions." She then listed the other interactive figures in the museum, who were, admittedly, not hot: You can do the weather with Al Roker, have your singing voice evaluated by Simon Cowell, strike out Derek Jeter, or talk to a heavily bleeped Sharon and Ozzy Osbourne.

The Post ad, which was created specifically for Fleet Week, emphasized the Lopez figure because "we're hoping to get a lot of sailors in this week," said the spokeswoman. And, hypothetically, will those soldiers be able to touch the J.Lo figure? "Yes, you can touch everything," the spokeswoman said. "There are no ropes, no glass -- you can get really up close and personal." Uh-huh. Has anyone ever just tried to go at it with one of the "hotties"? "No, not that I know of," she said. Did she think the security guards would pull off any soldiers who were molesting the figures? "We don't have security guards. We have attraction hosts."