If you're a Christian Coalition member looking for a movie that reinforces all the homespun values you hold dear, this Kate Hudson vehicle is for you! 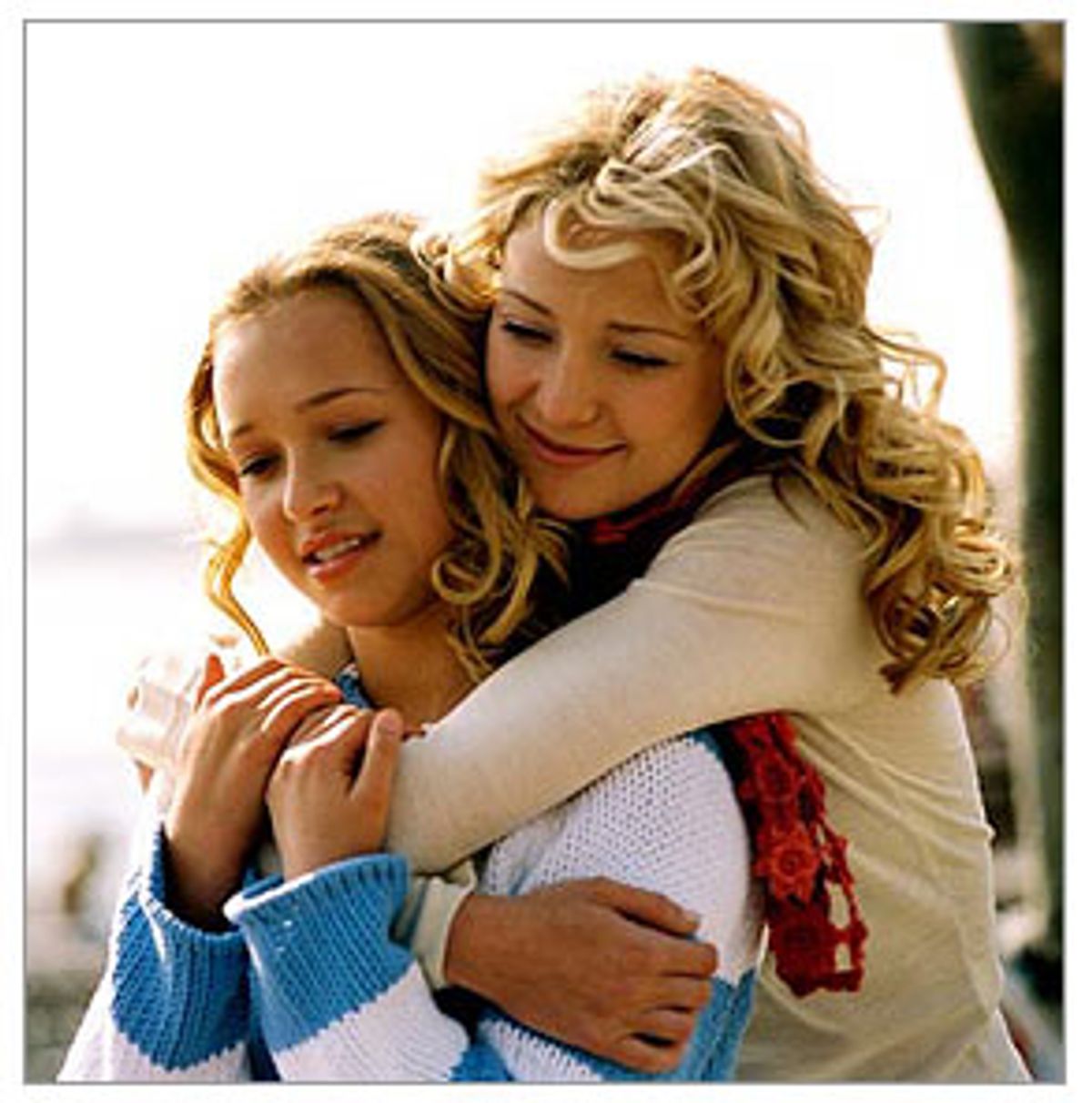 In "Yankee Doodle Dandy" (1942), James Cagney deciphers the Variety headline "Stix Nix Hix Pix" for a group of baffled teenagers. The cryptic rhyming phrase, he explains, means that small towns have rejected movies about country folk. Like everybody else, presumably, people in small towns went to the movies for the glamour of the big city.

I'd like to think that those people would have the good sense to reject "Raising Helen," too. It doesn't exactly abandon the big city; it merely shifts the action from Manhattan to Queens. But it makes a show of trading in the thrill of sophisticated urban life for a homiletic existence of conventional, homespun values -- all in the service of educating a young career woman that children and a man are the important things in life. Put it this way -- if a couple who belonged to the Christian Coalition, or your maiden aunt, or George and Laura Bush were looking for a reassuring night out, "Raising Helen" would fit the bill nicely.

Kate Hudson plays Helen, an executive assistant at a top-flight modeling agency whose older sister and brother-in-law are killed in a car accident, leaving her the guardian of their three kids, 15-year-old Audrey (Hayden Panettiere), 10-year-old Henry (Spencer Breslin) and 5-year-old Sarah (Abigail Breslin). It seems that perfectly spacing out her pregnancies wasn't the only way that big, dead sis was prepared. She had foreseen that Helen's carefree ways would need some grounding and that, in the event of her own tragic and sudden demise, her kids would be just the ticket.

Who could mourn a sister like that? Who wouldn't wish her alive again, if only to keep the meddlesome cow from interfering in your life? But we're not meant to see it as a bad thing that, without even consulting Helen, she took steps that threw her younger sister's life into a tizzy. No, we're meant to see it as an opportunity for personal growth.

The screenwriters, Jack Amiel and Michael Begler, and the director, Garry Marhsall, are very shrewd about showing us the life Helen is leaving. Modeling, it seems, is the type of profession where attractive young women down Advil with champagne -- at 10 in the morning! Helen lives the sort of busy life that not only makes her late for family dinners but gives her the opportunity for casual sex. Clearly, this little missy needs a heapin' helpin' of adult responsibility.

How fortunate for her that we live in a society that makes it as difficult as it can for single mothers to pursue a career, or for many people to find affordable housing. Unable to shoehorn her three new charges into her tiny Manhattan apartment, Helen moves the brood to Astoria, Queens. Unable to balance her new mommy responsibility with her high-powered job, Helen gets the sack. Salvation comes figuratively in the form of a receptionist's job at a used-car dealership, and literally in the form of the hunky Lutheran minister (John Corbett, in another installment of his thankless career path as sexy guy who's a sport) who's principal at the kids' new school.

I'm all for movies having their fantasy quotient (that's part of the reason we go to the movies). But if a movie chooses to introduce specifics, they have to make sense. Helen's rent in Queens is $1,200 a month. Her pay for a 40-hour workweek is $17.50 an hour. If she gets paid for her lunch breaks, that comes to $700 a week. Figuring deductions for taxes and insurance, that would leave about $500 per week. That leaves $800 a month for utilities and food, clothing, transportation, sundries and entertainment for four people. That's without any emergencies or savings plan and no school fees for three kids. And yet not once do Helen or any of the kids fret about money. Are Garry Marshall and the screenwriters that ignorant of the situation they've set up?

Maybe, though in other places they are obviously trying to have it two ways. Helen has another sister, Jenny (Joan Cusack, who brings her usual talent of caricature to a lousy role), a model mom who resents the fact that Helen has been given a job Jenny thinks herself much more suited for. The movie gets laughs out of her -- she's always giving potpourri for birthday gifts and trying to interest her husband in her knitting. She's the movie's Stepford Wife, the thing it can point to in order to say it's not trying to sell traditional roles for women. But the role it devises for Helen (even if she does rise above being a receptionist in the end) is just that conventional and cozy.

Hell, even the movie's idea of providing her with a man is proper -- he's a minister, for Christ's sake (and what exactly does one cry out when making love to someone who introduces himself as "Pastor Dan"?). The only moment I laughed at was one that's openly hostile to all the movie's nice intentions -- when Helen Mirren, as Hudson's boss at the modeling agency, is left in charge of the 5-year-old girl and regards her as disdainfully as if she were last season's Prada.

It would be nice to say that, at this point, conventional and cozy don't seem fitting for Kate Hudson. But they do. She's only been in movies for a few years, but already it's getting harder and harder to see the freshness that made her such a sexy ray of sunshine in "Almost Famous." She showed a flash of that in some scenes in "Le Divorce" (although it's hard for anyone to be good when working with the hapless Merchant-Ivory). But more and more, Hudson is becoming the queen of the forgettable mainstream comedy, the sort of picture you watch on cable when you have the flu or in the aftermath of a bad breakup -- something you hope will be distracting enough to keep you from throwing up or jumping out the window. It's not that she's bad here; it's that there's no way for anyone to be anything other than cuddly and dear in this role. But cuddly and dear seem to be what the filmmakers were going for; those are the virtues it upholds. There's no telling if the sticks will go for "Raising Helen," but this ode to the most stifling aspects of family and motherhood make you feel like the hicks have all uprooted themselves and moved into the front office at Touchstone.