"Hitman: Contracts" lets you kick major bad-guy butt -- but dealing with all the blood-oozing dead bodies isn't so easy. 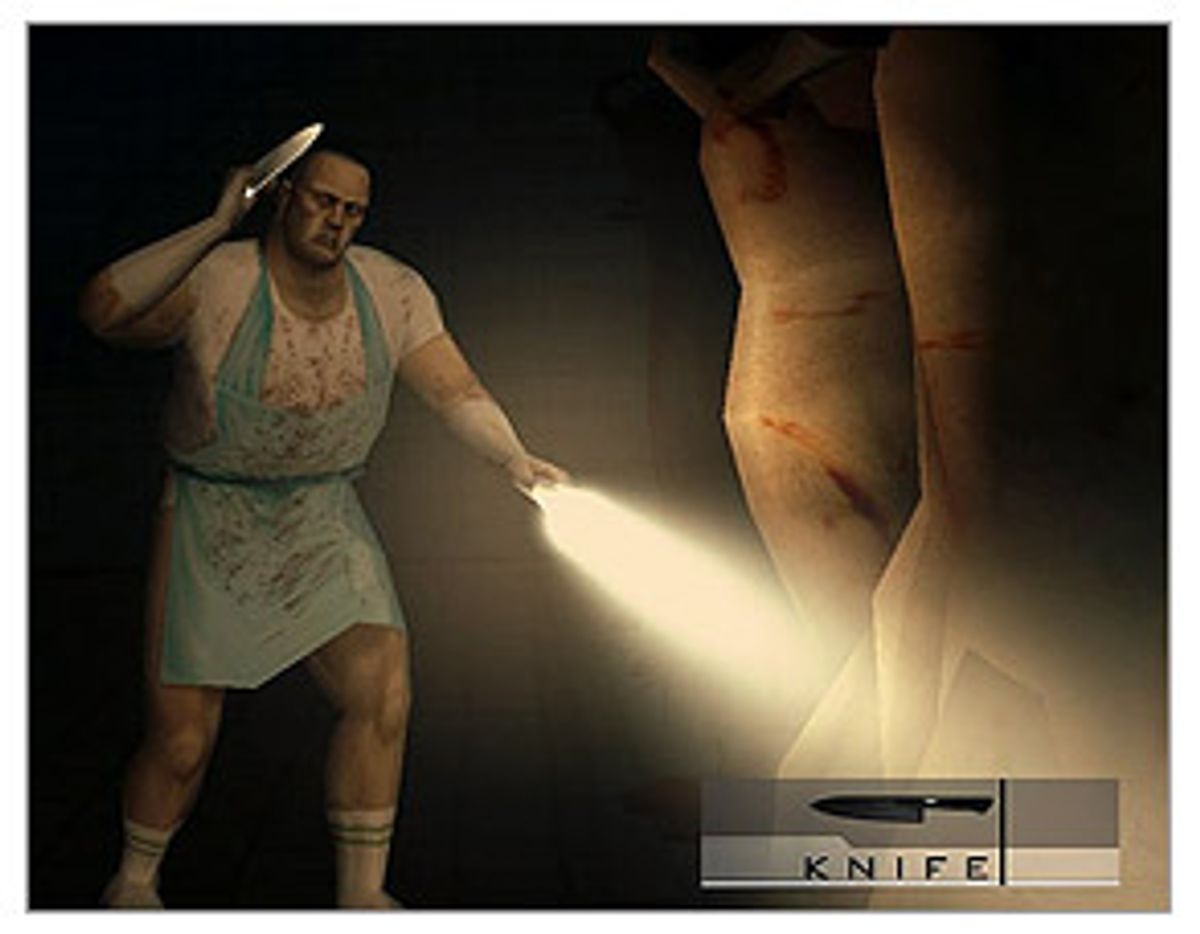 Tom: Let us count the ways. Actually, let us not. But he kicks more ass than any other video game antihero, that's for certain. I think he may even be better than Max Payne.

Jeff: I love Max, but he wouldn't stand a chance against 47. Agent 47 could kill Max with a rusty lock-pick. "Hitman 2": the greatest game we've ever played?

Jeff: He's a trained killer with the sense of duty of a British soldier circa 1841 and the sense of mercy of Lucifer. He's bald, wears a black suit, and has a bar code on the back of his head.

Jeff: Yes. But most of his line is dead now. He's one of the last cloned hitmen left. The last game saw him trying to abandon his assassin past and living as the groundskeeper for a quiet church in Italy. That didn't work out too well for our 47, or ultimately for the fools who kidnapped his church's priest.

Tom: The last game took 47 from Afghanistan to Kuala Lumpur to St. Petersburg to India on assassin missions, all of which were just phenomenal. The graphics! The action! The options!

Jeff: That's the great thing about the "Hitman" games. There's never any one way to do a mission. You can go stealth and try to poison your targets, or strangle them in dark corners, or stab them silently with a knife, or poison their sushi, and not hurt any innocents in the process, or you can be, well, less subtle about it -- neither of which the game implicitly rewards. It lets you listen to your dark, sclerotic heart.

Tom: I love how the "Hitman" games rank your performance. "Professional" if you do it really quietly, for instance, and "Psychopath" or "Mass Murderer" if you go guns-blazingly nuts.

Jeff: We should point out that we always try to go for the stealth option...

Tom: But, you know, things fall apart. It's damned hard! Which brings us to the singular aspect of the "Hitman" games: the dead bodies and costume changes.

Jeff: Unlike most video games, the dead people in "Hitman" don't simply disappear. You kill someone, and the body just lies there. So you have to hide the bodies -- in closets, behind boxes, in shadowy corners. And the bodies are so realistically rendered that while you're dragging them they flop around unsettlingly and leave a big bloody smear.

Tom: After you knock someone off, you can take his clothes and disguise yourself and walk around. Unless you do something stupid like strangle someone in full view of the guards, your disguise allows you to pass through levels more or less unimpeded. And there's this awesome little "suspicion monitor" that keeps track of how suspicious you look. How your heart starts pounding when you're out of ammo, just finished stashing a body in an elevator, and are strolling past a heavily armed guard would be hard to describe for someone who hasn't played the "Hitman" games.

Tom: You know, we should talk about this, since we're on the record despising a game of similarly violent amorality.

Jeff: Yeah. I know. But the bad guys in "Hitman" really have it coming to them. They kidnap priests! "Hitman: Contracts" opens with Agent 47 waking up in a Romanian bedlam. There are dead bodies and lakes of blood everywhere, people are hung up on cables, and wandering the halls are all these utterly insane guys in asylum-style nightgowns. And then the Romanian SWAT team breaks in looking for you. Speaking Romanian, I hasten to add.

Tom: In the Afghanistan levels of "Hitman 2," they were actually speaking Dari. The "Hitman" games may be unbelievably brutal, but they're culturally aware.

Jeff: Are you noticing how much bloodier "Contracts" is compared to "Hitman 2"?

Tom: I am. The programmers have paid unseemly attention to the physics of gunshot wounds in this one. Blood sprays in mists, squirts from wounds, splatters walls and doors. It's kind of sickening.

Jeff: And notice how differently people react when you shoot them in the leg as opposed to the shoulder or head.

Tom: They must have consulted a trauma surgeon or something. That's how goddamned creepy it is.

Jeff: Another great thing about "Hitman" is the innovative option menu, which allows you to do multiple things at once, like drag a body, open a door, and open fire on innocent bystanders all at the same time.

Tom: You're going for the "Mass Murderer" ranking, I see.

Tom: I like the way 47 moves. Whether he's leaning around a corner, sneaking around, garroting someone, reloading his weapon, or running backwards, he looks cooler than any action star.

Tom: I think 47 could use a guy like me as a moderating influence in his life. Maybe he wouldn't be so angry if he had someone to love.

Jeff: I don't know if I'm disappointed or relieved that they didn't mess with the "Hitman" formula too much here. It's not a major leap forward for the franchise in any discernible way, though "Contracts" is much, much, much darker than anything we saw in the previous game.

Tom: Considering that the previous game allowed you to chop up a fat guy in a whirlpool with a bunch of bikini-clad models, that's saying something.

Jeff: On this second mission, you have to find a kidnapped girl. I just found her. My mission handler, the ever-trusty Diana, just asked, "Can you get her out?"

Tom: And 47 answers, "Some of her." She's hanging upside down by a meat hook! There's blood everywhere. It looks like Leatherface's kitchen in here.

Jeff: I'll be executing my mission with extreme prejudice from here on out.